During system integration in SAP PI, one of the most common things we generally encounter is value translation (or value mapping). And SAP has provided various approaches to handle it, for example using:

In this blog, I am going to focus on the option of using a BRM decision table, and how to access it directly from a UDF (User Defined Function) library without any web service calls. In my opinion, this approach has the following advantages:

Here, I am going to use packaging material conversion for demonstration purposes. Below is a snapshot of how the SAP BRM decision table looks like. The yellow columns are conditions, and the green column is the desired outcome.

To achieve our purpose, we need to create a list of objects:

Below is a step by step instruction.

Open your NWDS and switch to the “Development Infrastructure” perspective. 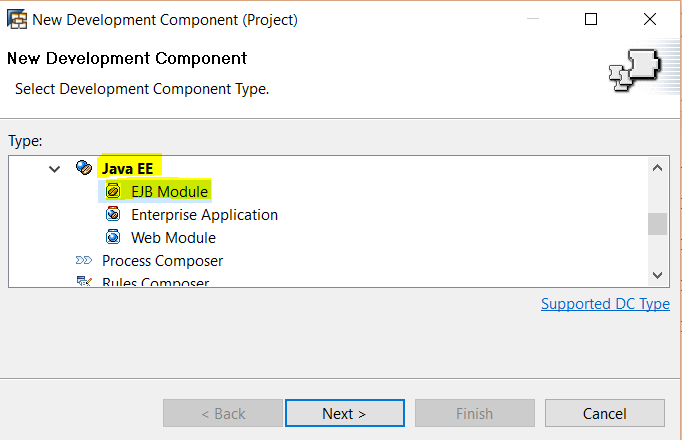 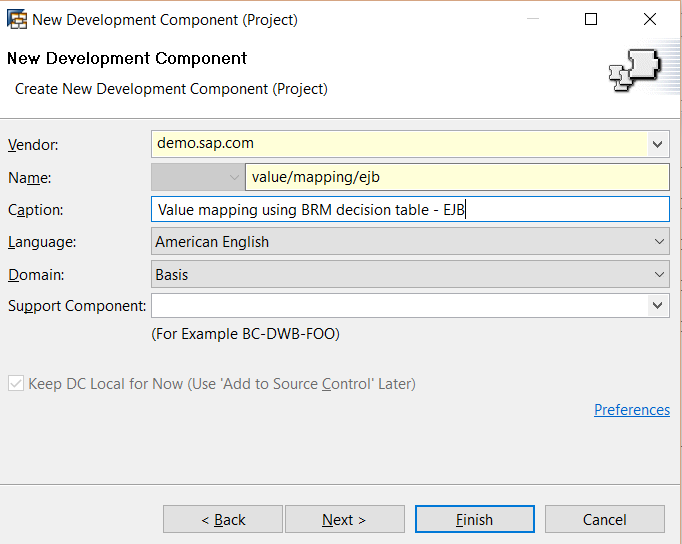 Inside the EJB development component, create a Java class called “ValueMapping” with all get and set methods (as shown below). Note that later on we will use it for building BRM rules and decision tables. 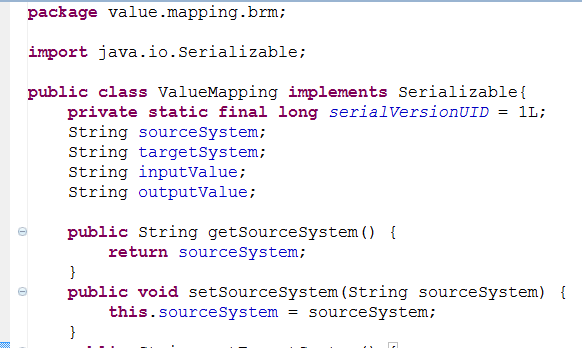 Then go back to the NWDS Development Infrastructure perspective to declare a public part. 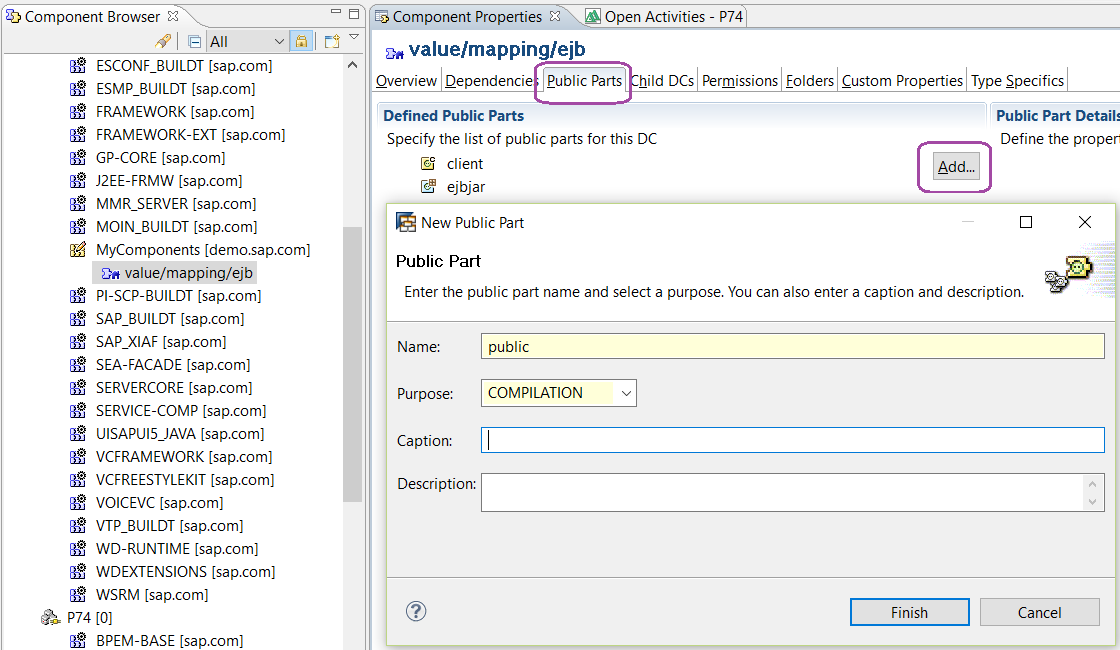 After declaring the public part, right click on it and then choose “Manage Entities”. Add the Java class we just created to it. 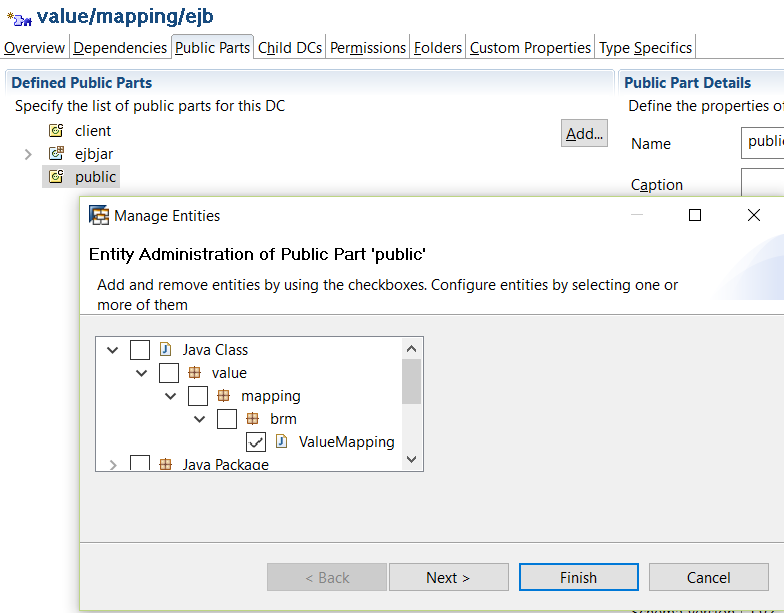 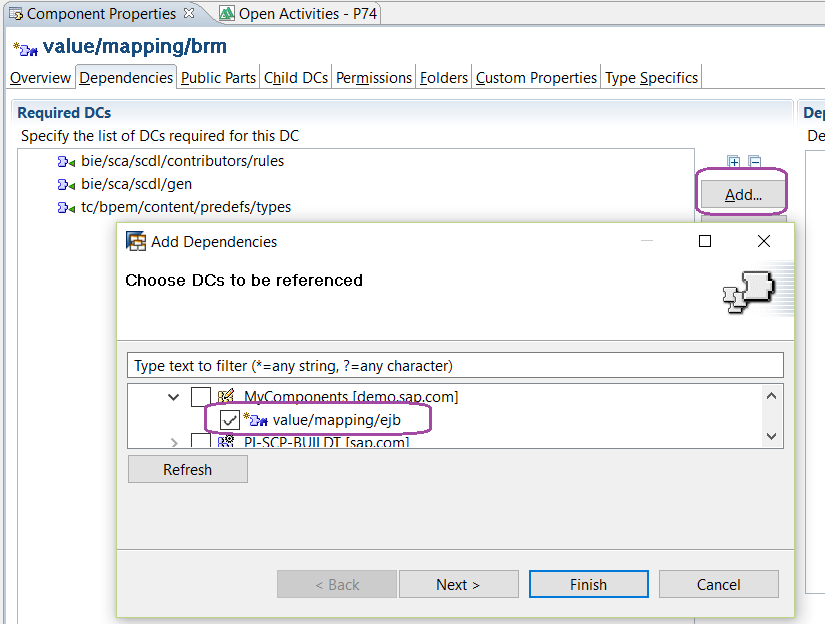 Now, we can switch to the NWDS perspective “Rules Compose” to create a ruleset, a rule and a decision table. One can refer to SAP help document (“Writing Rules on Java Classes”) if helps are needed. Below is how the BRM rule and decision table looks like.

3. Add dependency for “value/mapping/ejb”, and create a Java Session bean for accessing the BRM application

In order to access BRM rules and decision tables, we need to first add a dependency to standard SAP development component “tc/brms/facade”. So go to NWDS development infrastructure perspective. Next, switch to NWDS perspective “Java EE” to create a Java session bean. The session bean is later on to be called from a UDF library for accessing the BRM decision table. 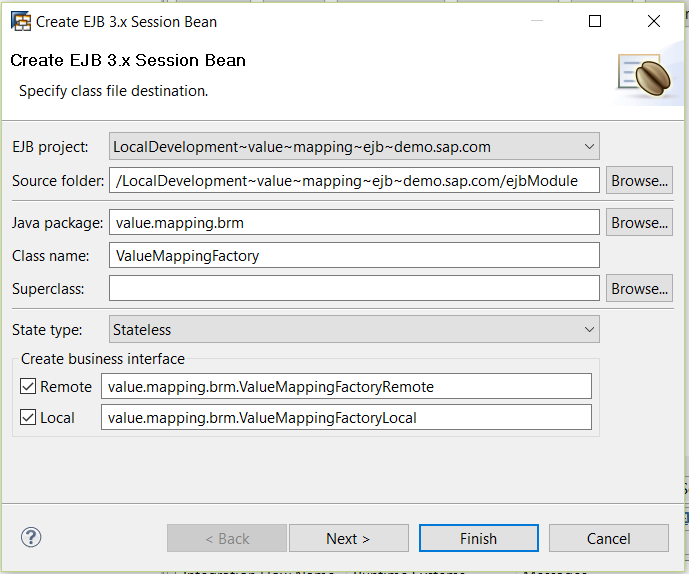 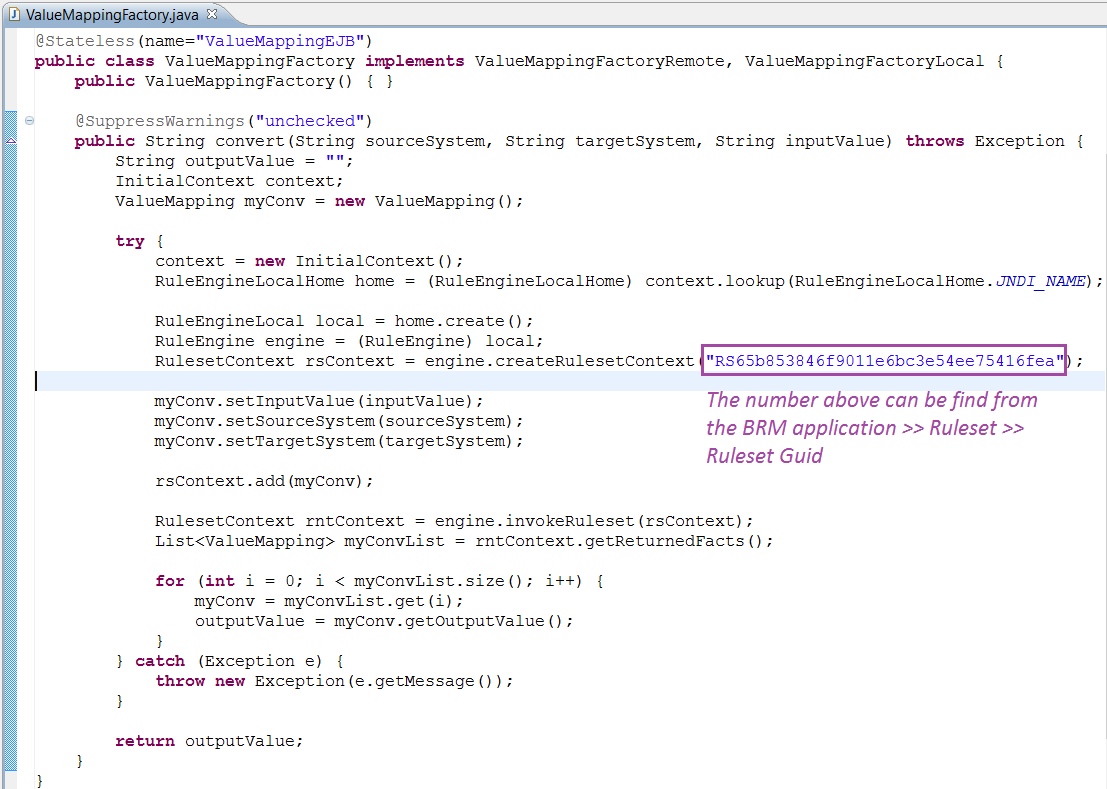 The process of creating an EAR development component is pretty much the same as mentioned in step 1, the development type is “Java EE >> Enterprise Application” however.
It is important to remember to also add the dependency to “tc/brms/facade” (and this time also check Deploy Time, Runtime and Build time dependencies, as shown below).

Then, deploy the EAR and BRM development components into the PI runtime.

The main idea of accessing BRM decision tables is through the session bean we have developed (using either the local or remote interface depending on the SAP PI system setup). To access the session bean from the UDF, we need to use the technique called Java Reflection. Below is the complete code of the UDF library. 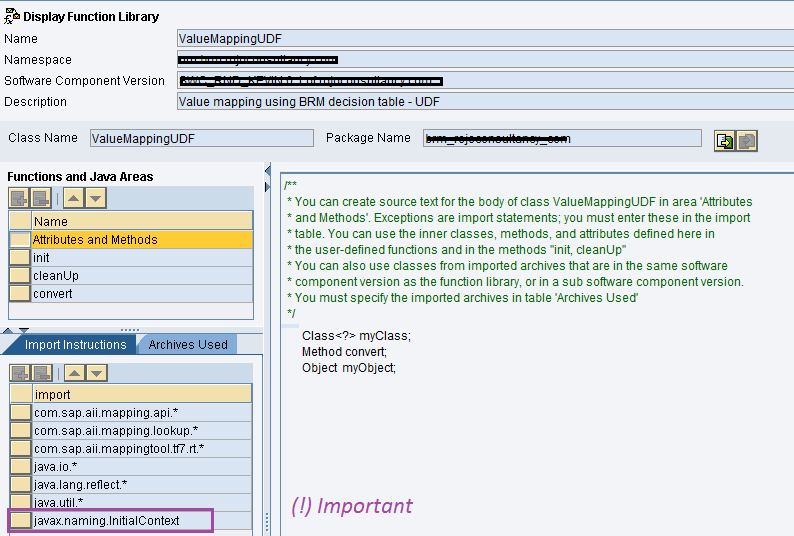 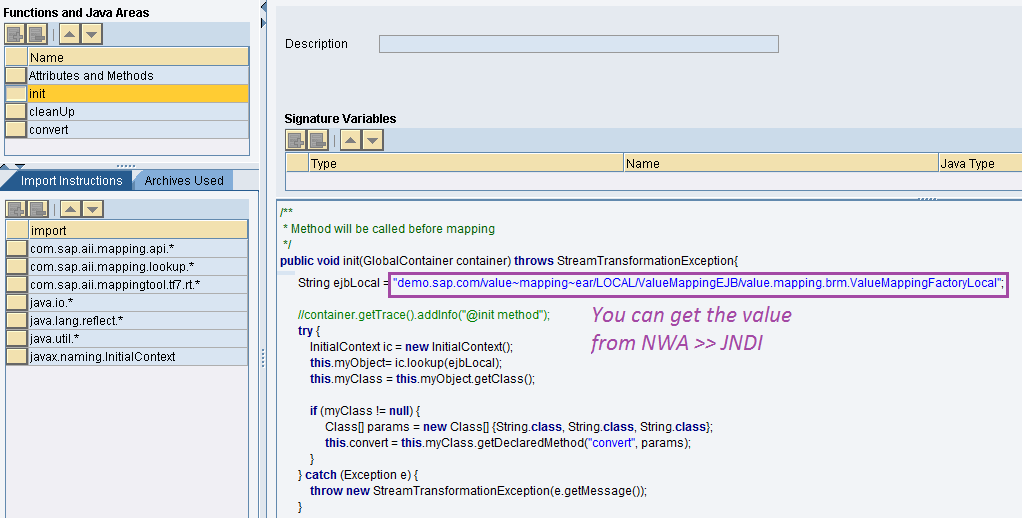 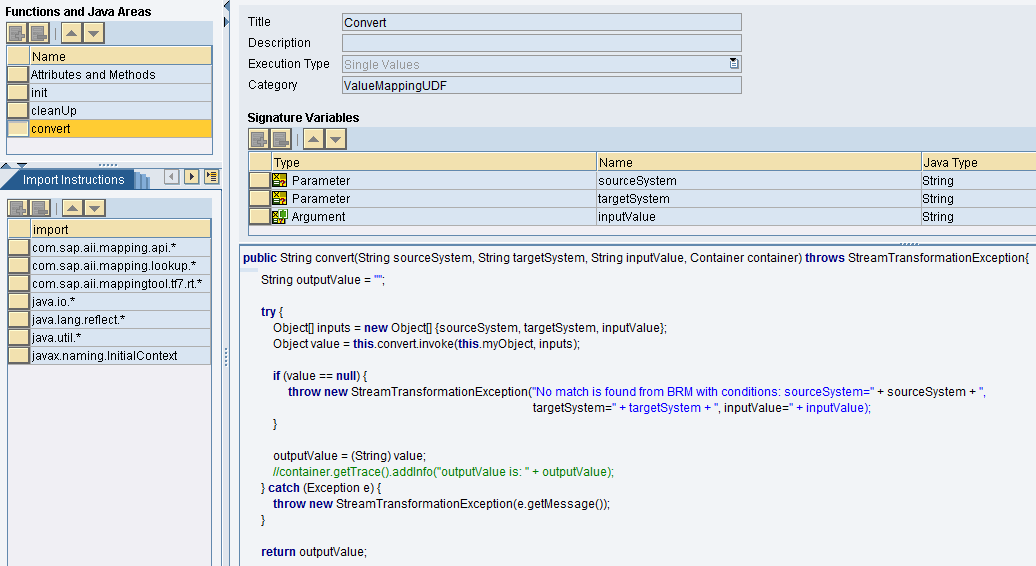 OK, we have now completed all the developments. It’s time for testing …

A message mapping is created for the testing purpose. It looks like below:

Then to verify the performance, add 5 000 records into the BRM decision table, and repeated the Material element in the source message 50 times. Are you wondering how does it impact the performance?

Voila, it only took 221 milliseconds to complete the test! So performance wise, I think it’s quite good.

Thanks for sharing the wonderful feature, this would help to move not only value mapping but some of the custom table (ABAP or external) to BRM.

Thanks for sharing it ..

its a nice blog. But kindly share how to create and edit rules and decision table. Also mention how to update decision table entries.

Thank you for your blog, it's very helpful but I can't see the images. Would you be able to check the images again please?

Thanks Former Member for your blog, it is really helpful. Unfortunatelly I cannot see the images anymore. It is possible to reupload them?

can you please suggest how to call BRM table from XSLT mapping?

I'm getting an error cannot "RuleEngineLocalHome cannot be resolved to a type". Seems I'm missing some Library/jar of this class file to the project. Would you please help here what is missing?

Check step 3, you are missing the dependency to tc/brms/facade

Thanks for this fine blog. We have tried to do this, but are having trouble with the rule not answering. We have found the following error in the java log.

We think i must have something to do with the xpath that is used for every element i the decision table.

Could show what the xpath is for the elements sourceSystem, targetSystem, inputvalue.

We solved the issue.

We read your blog once more and found that we had made the rule before the class. And had not made a rule based on the fields from the class. Thanks.