SAP Products and the DW Quadrant

In a recent blog, I introduced the Data Warehouse Quadrant, a problem description for a data platform that is used for analytic purposes. The latter is called a data warehouse (DW) but labels, such as data mart, big data platform, data hub, and so on, are also used. In this blog, I will map some of the SAP products into that quadrant, which will hopefully yield a more consistent picture of the SAP strategy.

To recap: the DW quadrant has two dimensions. One indicates the challenges regarding data volume, performance, query and loading throughput and the like. The other one shows the complexity of the modeling on top of the data layer(s). A good proxy for the complexity is the number of tables, views, data sources, load processes, transformations, and so on.

Big numbers indicate many dependencies between all those objects and, thus, high efforts when things get changed, removed, or added. But it’s not only the effort—there’s also a higher risk of accidentally changing, for example, the semantics of a KPI. Figure 1 shows the space outlined by the two dimensions. The space is then divided into four subcategories: the data marts, the very large data warehouses (VLDWs), the enterprise data warehouses (EDWs) and the Big Data warehouses (BDWs). See figure 1. 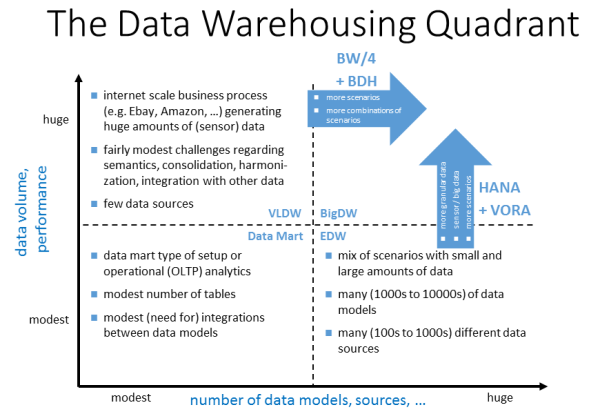 Now, there are several SAP products that are relevant to the problem space outlined by the DW Quadrant. Some observers (customers analysts, partners, colleagues) would like SAP to provide a single answer or a single product for that problem space. Fundamentally, that answer is SAP HANA. However, SAP HANA is a modern RDBMS; a DW requires tooling on top. So, there is something more required than just SAP HANA. Figure 2 assigns SAP products/bundles to the respective subquadrants. The idea behind that is to allow for a “flexible rule of thumb” rather than a hard assignment. For example, SAP BW/4HANA can play a role in more than just the EDW subquadrant. We will discuss this below. However, it becomes clear where the sweet spots or the focus area of the respective products are. 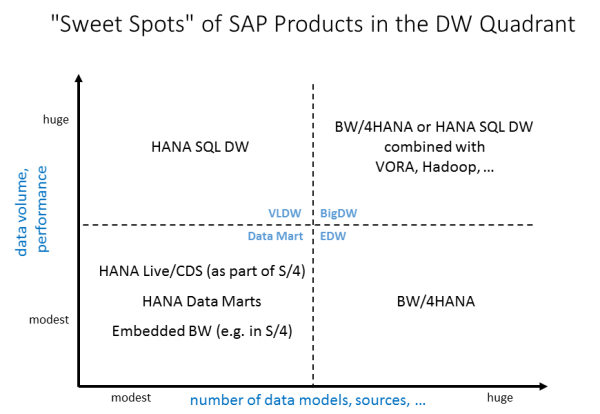 From a technical and architectural perspective, there are a lot of relationships between those SAP products. For example, operational analytics in SAP S/4HANA heavily leverages the BW embedded inside S/4. Another example is SAP BW/4HANA’s ability to combine with any SQL object, like SQL accessible tables, views, and procedures/scripts. This allows smooth transitions or extensions of an existing system into one or the other direction of the quadrant. Figure 3 indicates such transitions and extension options: The possibility to evolve an existing system— located somewhere in the space of the DW Quadrant— to address new and/or additional scenarios (to move along one or both dimensions) is an extremely important and valuable asset. Data warehouses don’t remain stale; they are permanently evolving. This means that investments are secure and so is the ROI.

Learn more about all the SAP Data Warehousing activities at SAPPHIRE NOW.