How Blockchain Brings Trust To Supply Chains In Every Industry 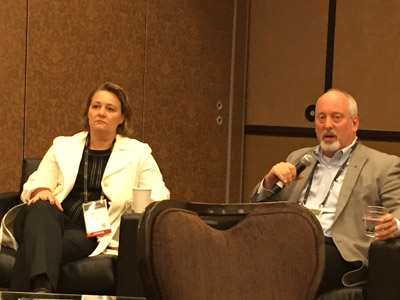 The emergence of blockchain technology couldn’t be more fortuitous for the 130-year old diamond industry, much of which is still powered by scraps of paper, a gentlemen’s handshake, and the promise to pay. But higher quality synthetic stones are rampant and harder to detect, while hackers have breached certificate repositories, increasing the risk of fraud from fake, stolen or conflict zone diamonds. This was the backdrop of an announced partnership between SAP Ariba and Everledger to explore blockchain initiatives that will help reduce risk and fraud for banks, insurers and open marketplaces, including the diamond industry. I listened to executives from both companies explain the partnership during an insightful roundtable at the recent SAP Ariba Live 2017 event.

“The ultimate beneficiary of our technology is the consumer,” said Leanne Kemp, CEO at Everledger (above at left). “Using the distributed ledger, people will know where their diamonds came from, if they’ve been rightfully traded, and if it’s a true diamond or a synthetic stone.”

According to Kemp, her fast-growing London-based startup has transacted over one million diamonds in its blockchain, and is expanding to cover other valuable assets such as wine and art.

“We want to bring transparency to a worldwide business network that’s been fairly opaque ─ 81 countries are involved in the international diamond trade,” said Kemp. “The world is at a point where we can apply the worldwide ledger to mother earth’s assets, meaning diamonds. We have the ability to know and track an object through its provenance chain, enabling proof of its associated certification as well as compliance with duties and taxes.”

Blockchain has the potential to improve visibility into contracts between buyers and sellers for faster business with better outcomes for both parties in many industries. “If you can track and trace diamonds, you can track and trace anything,” said Joe Fox, Vice President of Business Development and Strategy at SAP Ariba (above at right). “It makes sense for us to team up with Everledger, and apply the same chain framework around all goods for our customers.

Fox believes blockchain will transform procurement with a new trust protocol as applications are layered onto a cloud-based, tamper-proof network, driving more innovations. It will also help buyers gain greater trust in suppliers via third party verification across the supply chain.

“Blockchain brings trusted commerce into the SAP Ariba fabric,” said Fox. “We’re adding blockchain to the application layer of the SAP Ariba network so that we can build enhancements to existing applications and new chain-based applications using Hyperledger that we hadn’t even considered before like smart purchase orders and smart invoices. Blockchain is a business structure accessible everywhere sitting on the internet, and that’s what companies have been waiting for from a business enterprise software perspective.”

Getting diamonds onto the blockchain with a digital representation is just the beginning of market transformation. While blockchain allows international payments in minutes, potentially disintermediating banks, Fox said those institutions will shift to a more important, long-time role, providing trust between parties exchanging funds. Only now those transactions are based on matching the digital to the physical relative to currency and assets. “The quality of the chain is based on how well it’s designed for inheriting external trust,” he said.

It may be hard for seasoned diamond traders to imagine a world without bits of paper and their word alone, but trust us, it’s coming.

If You’re Involved In Real Estate, You Need To Understand These 2 Innovations

To Get Past Blockchain Hype We Have To Think Differently