In less than a month Microsoft will present at SAPPHIRE. There will be plenty of fantastic topics to look out for, but I just want to focus on a seemingly small thing: running SAP on Azure.

For those of you who have read my previous blogs (before recently joining Microsoft Former Member) you know that I am a huge fan of integrating SAP and Microsoft . This goes in both directions: putting SAP data in Microsoft UIs (like what we had introduced over 10 years ago in Duet / Duet Enterprise and is now almost possible out of the box without any additional tools) and surfacing Microsoft data and tools in SAP UIs (like putting a simple Email tile in the SAP Fiori Launchpad). This integration journey is still key to a lot of customers and for example working with SAP data out of Excel is something that I think most of us are extremely familiar with.

This time I want to focus on something else: running SAP on Azure. This can be your “traditional” SAP NetWeaver system or your first tests running SAP HANA on Azure.

Looking back for me the journey started several years ago. At TechEd 2014 I wanted to do a hands-on session to showcase how easy it is to work with SAP Gateway for Microsoft. This involved not only installing the actual SAP Gateway for Microsoft pieces, but also running Outlook, Excel, Exchange, an IDES system … and a few more components. The challenge was that each of the participants would need an environment of their own.

In order to do that I used my MSDN subscription to prepare this environment. Literally one month before the event I used my free $150 credits to create a template, test it, enhance it, test it, …

After a few cycles I finally had a working template — and almost no more credits left.

So in the month of TechEd (my credits were back to $150) I used some PowerShell scripts to deploy all the required instances so that we could have a very successful hands-on session (and even after the repeat of the hands-on I still had enough credits left in this month to do some more ad-hoc demos) — obviously if I had used my credit card, I would not have been so resource aware and could have just paid whatever more resources would have been required…

I was so impressed with the simplicity and efficiency to manager my tens of VMs that I used this very same process — obviously with improved and updated templates — in many other code-jams. I only used (and paid) for the VMs when I was actually using them.

Another example is the fantastic extending S/4HANA OpenSAP Course done by Thomas Bieser. My biggest challenge in following the steps outlined in the how-to guide was getting my VM up and running. At that time my laptop was not so well equipped and starting the VM always took ages and brought the rest of the system to a halt. So again I just used my Azure subscription, selected the required Linux OS openSUSE Leap 42.1, performed some configurations and deployed my SAP system there — from that moment on running the SAP system and following the course was just fun!

Similar things I have seen now with several customers: not only running their QA SAP systems on Azure, but actually their productive, Dev, training and Sandbox systems — and always only using them / switching them on, when they are being used. By this customers are saving a lot of money…

In the meantime provisioning SAP systems is much, much easier than it was a few years ago.

For some scenarios it is as simple as selecting the right VM directly from the Azure portal.

For a bit more choice you can just go to the great SAP Cloud Appliance Library which allows you to connect your Azure subscription to CAL and then deploy a ready to use VM directly to Azure. Literally within a few minutes (depending on the scenario you choose) you can have a SAP system up and running. (see also https://docs.microsoft.com/de-de/azure/virtual-machines/windows/sap-cal-ides-erp6-ehp7-sp3-sql & https://wiki.scn.sap.com/wiki/pages/viewpage.action?pageId=448472484) 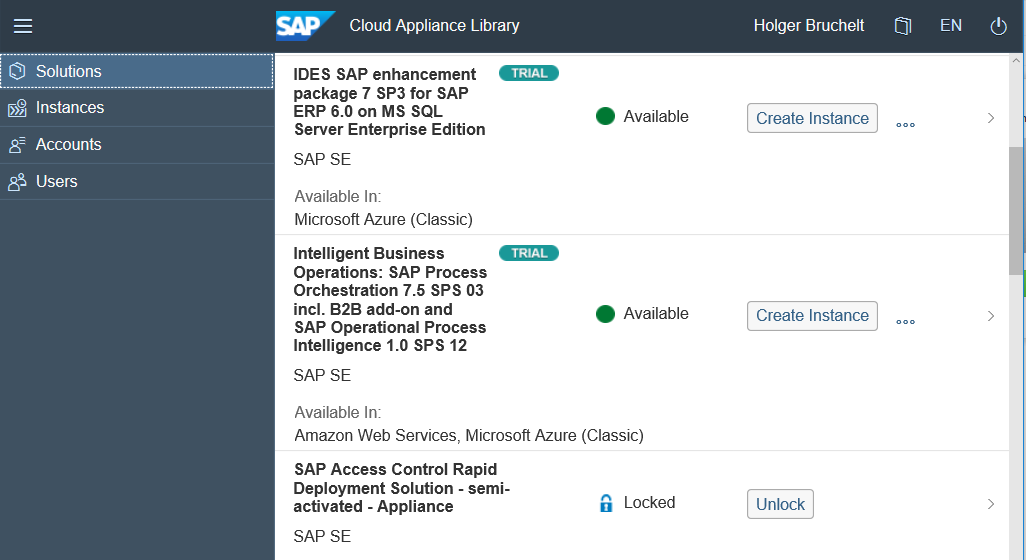 If this is still not good enough (which is probably the case for your existing Dev / Sandbox / QA systems which you want to move to Azure) there are several other options available.

One very good starting point to see how to deploy your systems on Azure can be found here, https://docs.microsoft.com/en-us/azure/virtual-machines/workloads/sap/get-started

So whether you want to just play with your SAP system, using it during an OpenSAP course, prepare for a CodeJam session or really want to put your Dev / QA or even productive systems in the cloud, Azure has you covered! If you are at SAPPHIRE (I won’t be there…) make sure to reach out to my colleagues and ask them lots of questions 🙂