Busting Myths about the Deployment Modes of SAP S/4HANA Finance

How do myths get started?

Remember the game “telephone” from grade school? The first person whispers something – preferably a longer phrase – into the ear of the person sitting next to him or her. That person whispers (presumably the same) content to the next person. The longer and more complex the idea, by the time you get to the end of the line, the less the information received by the last person resembles the original phrase.

For all of us, this can easily happen because we tend to focus on the specific data points that are the most relevant to our own needs, our companies’ needs, and that of our individual implementations. For example, if you are interested only in a cloud implementation, you likely care less about the roadmap for on-premise.

In that context, let’s take a look at the three most common myths that surround SAP S/4HANA Finance.

SAP S/4HANA Finance (previously known as SAP Simple Finance) encompasses solutions across all portfolios that support Finance processes, including SAP ERP; SAP solutions for enterprise performance management (EPM); and SAP solutions for governance, risk and compliance (GRC). These capabilities have been organized along five end-to-end processes, as shown in the diagram below, and leverage analytical tools and the in-memory capabilities of SAP HANA. 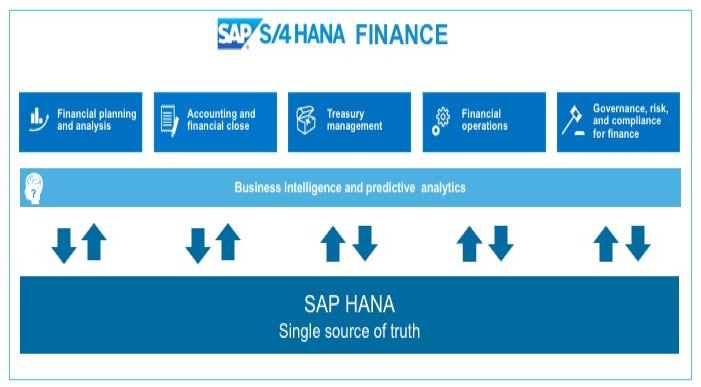 There are particular aspects of SAP S/4HANA Finance that have been re-architected to take advantage of in-memory technology. Most notable is SAP Accounting, which introduces the Universal Journal, combining transaction tables across finance and controlling, and eliminating the need for totals tables and indices. In addition, with SAP Fiori, SAP Smart Business cockpits are available for various finance roles, from the CFO to finance operational roles such as A/R and A/P. These cockpits include on-the-fly calculations of KPIs for management summaries, with the ability to drill down into granular details within the Universal Journal. Keep in mind that this innovation is only one aspect of SAP S/4HANA Finance.

In terms of deployment, you have several options, from completely on-premise, to completely in the cloud, to a hybrid of the two, as shown in the diagram below.

Let’s look at the differences between the private and the public cloud options.

And for more information about our solutions for Finance, please visit: