This article will explain how to ETL (Extract, Transform and Load) data from SAP BPC 10.x model into in SAP BW 7.4+ dataflow. With this solution, existing SAP BW and SAP BO reports can be quickly migrated to consume SAP BPC data.

The assumption is that you already have your Financial Consolidation reports consuming data from SAP ECC built on the top of SAP BW providers. Now you would like to use the same reports (BEx Queries and SAP BO) as-is to report SAP BPC data instead. Meaning you do not want to build all the reports from the scratch in SAP EPM client tools. If that is not the case, of course you should be using SAP EPM..

With SAP BW 7.4, the feature of using “Query as an Infoprovider” allows the extraction of data using Transient BEx Query on the top of BPC Virtual Provider.  The consulting solution presented here can be achieved by creating a SAP BW transformation using the BPC Transient Query as source. Some ABAP development on SAP BW backend is required.

Description of the solution

As well known, as per SAP BW environment, SAP BPC uses its own structure of master data which are totally different from regular SAP BW objects, for Instance ACCOUNT = 0GL_ACCOUNT. Other common samples are the “Time dimensions” and the “Key figures”. Usually BPC objects are copies from original SAP BW objects translated in a special naming convention.  Moreover, the internal technical name changes when promoting SAP BPC models through SAP BW environments (Dev, QA, PROD). To fix it the SAP Note 1689814 needs to be applied.

To deal with the SAP BPC and SAP BW meta data discrepancies a custom mapping needs be created. The follow is the breakdown SAP BPC x SAP BW: 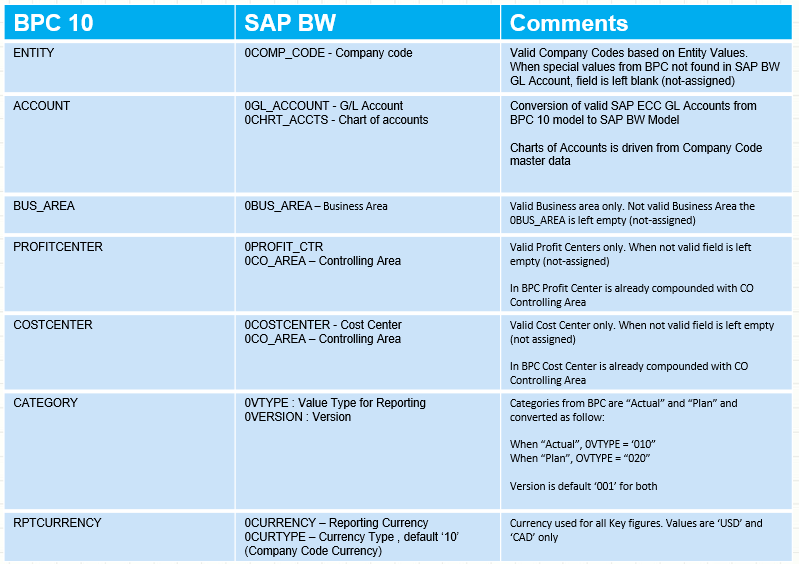 Below a very simple ABAP DDIC custom table maintained via SM30. This table is used in the SAP BW transformation through ABAP coding. 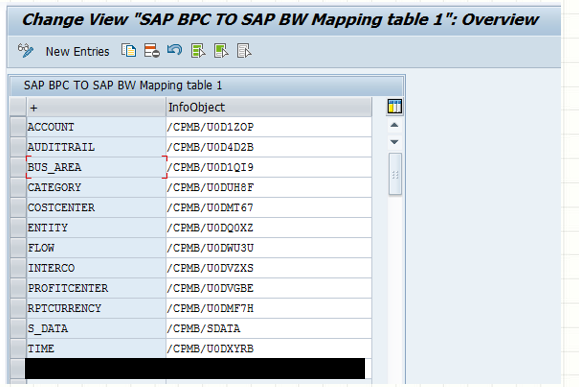 As explained before, the BEx Transient Query is used as datasource. SAP Note 1872718 has all the details how to develop it. Down here the explanation of the measures (or key figures) provided by the SAP BPC Transient Query:

Important: I had to change the calculation for the ACCOUNT_SIGN because during the transformation the values were being zeroed out.

ACCOUNT_SIGN variable uses a replacement path based on ACCOUNT to change the sign of the measure accordingly during reporting. Using BEx Transient Query as Provider this is not required. It fails and brings all values as zero.

Selecting Query as Provider from and choosing the SAP BEx Transient Query from the drop list: 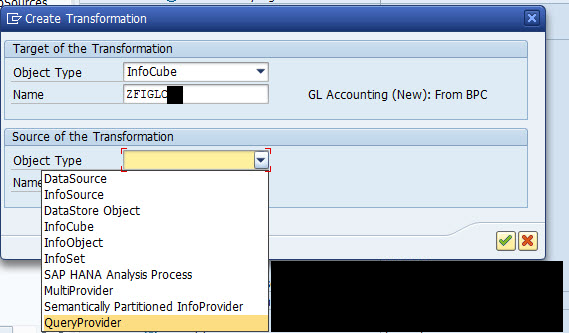 The ABAP coding should not be that complex.  During the LOOP AT in the SOURCE_PACKAGE just refer to the ABAP DDIC custom mapping table and assign every dimension accordingly. Usually I use FIELD_SYMBOLS and ASSIGN. Then MOVE-CORRESPONDING to the RESULT_PACKAGE.

Heads-up: The sample presented here was done in SAP Netweaver BW 7.4 SP7. In this patch, I had issue with ASSIGN_TYPE_CONFLICT short dump. If that happens, SAP OSS Note 2164973 should resolve it.

The DTP should be always Full Load using the Fiscal Period and any other additional filters. In fact, we should put filters as much as possible to restrict the data from the very first source. In addition, if you have Actual and Plan data you should be splitting them in two different DTPs. 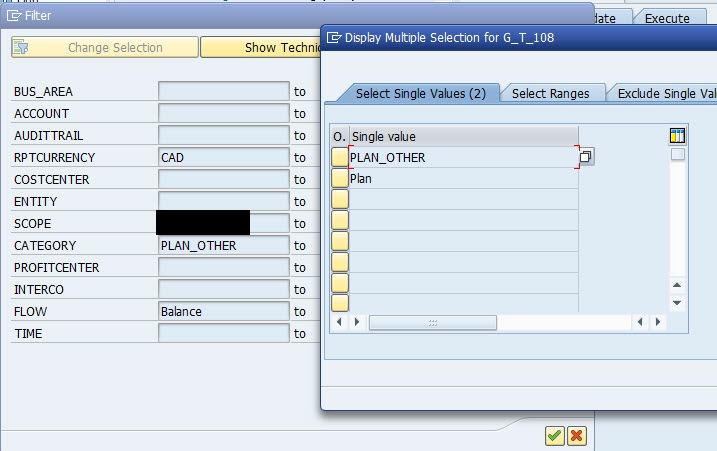 In the sample above, the SCOPE refers to the BPC model. TIME is in fact the Fiscal Period. For TIME, it would be better to have an ABAP code retrieving parameter from somewhere else. STVARC for instance would do it. Or you a new parameter could also be added to the ABAP DDIC custom table.

Heads-up: At the beginning the data loads were working just fine. However, with the increase of data in SAP BPC it become very slow. Memory consumption due to MDX statements were also an issue. To couple with it we applied the SAP note 2073240. It completely resolved everything.

The process chains should be very simple. Only observation would be the “Overlapping Request” process chain event. The data load from SAP BPC using the BEx Transient Query always perform full-load. In this case, the “Delete Request Overlapping” based on the DTP settings should be carried out to delete the previous request, for obvious reason. In this step, the copy of existing BEx Queries used for Financial Statement reports should be carried out by using tcode RSZC (Copying BEx Queries in between providers). As SAP best-practices we usually create BEx Queries on the top of multiproviders, regardless if there is only one infoprovider

The meta data of both source and target must match. The BEx Query being copied must have exactly the same attributes and measures in the target provider. Otherwise the copy will fail.

That is the end of this article.

I hope you find it useful. 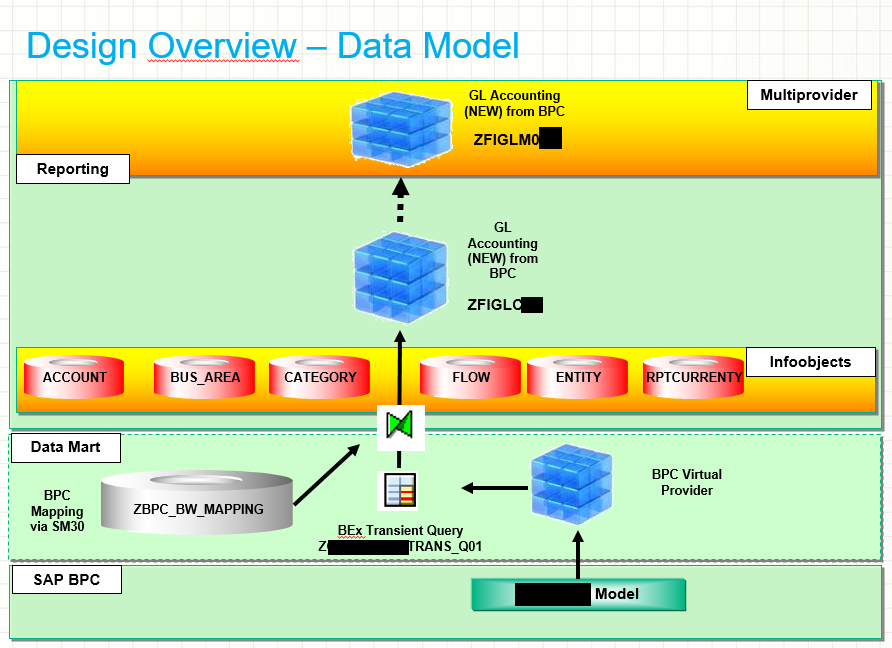 Thanks for very useful article! "The ABAP coding should not be that complex" - but still, is it possible to look at a small example of ABAP code with using FIELD_SYMBOLS and ASSIGN for mapping?