The topic of this blog is something I’ve been thinking of for a while. It took me some time to find a way to formulate my thoughts. Here it goes 🙂

SAP is promoting and selling SAPUI5 as a framework which is using the MVC pattern just like in Webdynpro. In the documentation of SAP you’ll find the following representation of MVC that they use: 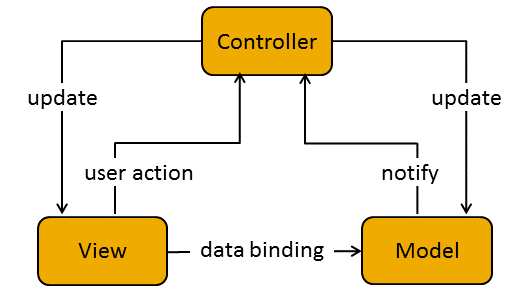 What I see in this version of MVC is:

I’ve been working on multiple Web projects on top of SAP with different technologies like KnockoutJS and AngularJS. While working on the project with KnockoutJS we used the pattern MVVM. AngularJS was also comparable to the KnockoutJS project with MVVM but we called it MVWhatever (google also does that 🙂 )

MVVM stands for Model View ViewModel. In this pattern the ViewModel acts like a controller but also contains a part of the model which is required on the view. Don’t we do the same in UI5?

My conclusion, the architectural pattern depends on how you use UI5

If we would follow the best practices of SAPUI5 then it would be (most of the time) MVVM that we’re using.

I’m not saying that my theory is the right one. But saying that SAPUI5 is using the MVC pattern is maybe too easy. We could or should use the same principle as google and just say that UI5 is following the architectural pattern MV* or MVWhatever. In that case it would always be correct!

It’s a very theoretical topic but therefore it’s not less important.  I hope that I’m not the only one who thinks about SAPUI5 like this. Please share your opinion and vision about this! I like to discuss this topic 🙂

Nice thought provoking blog, Wouter, thanks for sharing your thoughts.  When I started with UI5 I found the concepts much easier because I had done lots of web dynpro and so was familiar with MVC.  You're right though, that there are some important differences.

For me UI5 is all about binding controls directly to models.  In particular I'm a big fan of expression binding.  I bind often to JSON models and like to mix in some derived or calculated properties.  When all of my customers have moved to HANA I will be happy to take the suggested approach and let the server do all the work (using CDS views) but right now with ECC on a legacy database I find client-side filters and sorts work well.

How does your ViewModel concept relate to the binding that we have in UI5, e.g. the ListBinding that sits between a list and the data, where we apply the sorting and filters?

Thank you for sharing your experience! Glad you also noticed differences 🙂

The sorting and filtering is something you can add directly into the binding in the view or in the ViewModel itself by calling "getBinding().filter()". The concept stays MVVM because it filters on the model in the ViewModel.

But I believe the dynamic binding on a list like for example "/EntitySet('<dynamicValue'>)/List" is still a shortcoming in UI5... This is maybe part of another discussion 🙂

I agree 100%, SAPUI5 is documented as pure MVC but when implementing a SAPUI5 app application pure MVC doesn't cut it , as the code becomes to cumbersome, I myself have started using MVVM which I found to be more efficient

Completely agree, Wouter. I just discovered the notion of MVVM and it instantly reminded me of UI5. Glad to see someone confirm my feelings! Thanks for sharing this.

To me it seems a blend of MVC + MVP patterns (another name for MVVM … see MF’s article @ https://www.martinfowler.com/eaaDev/uiArchs.html).