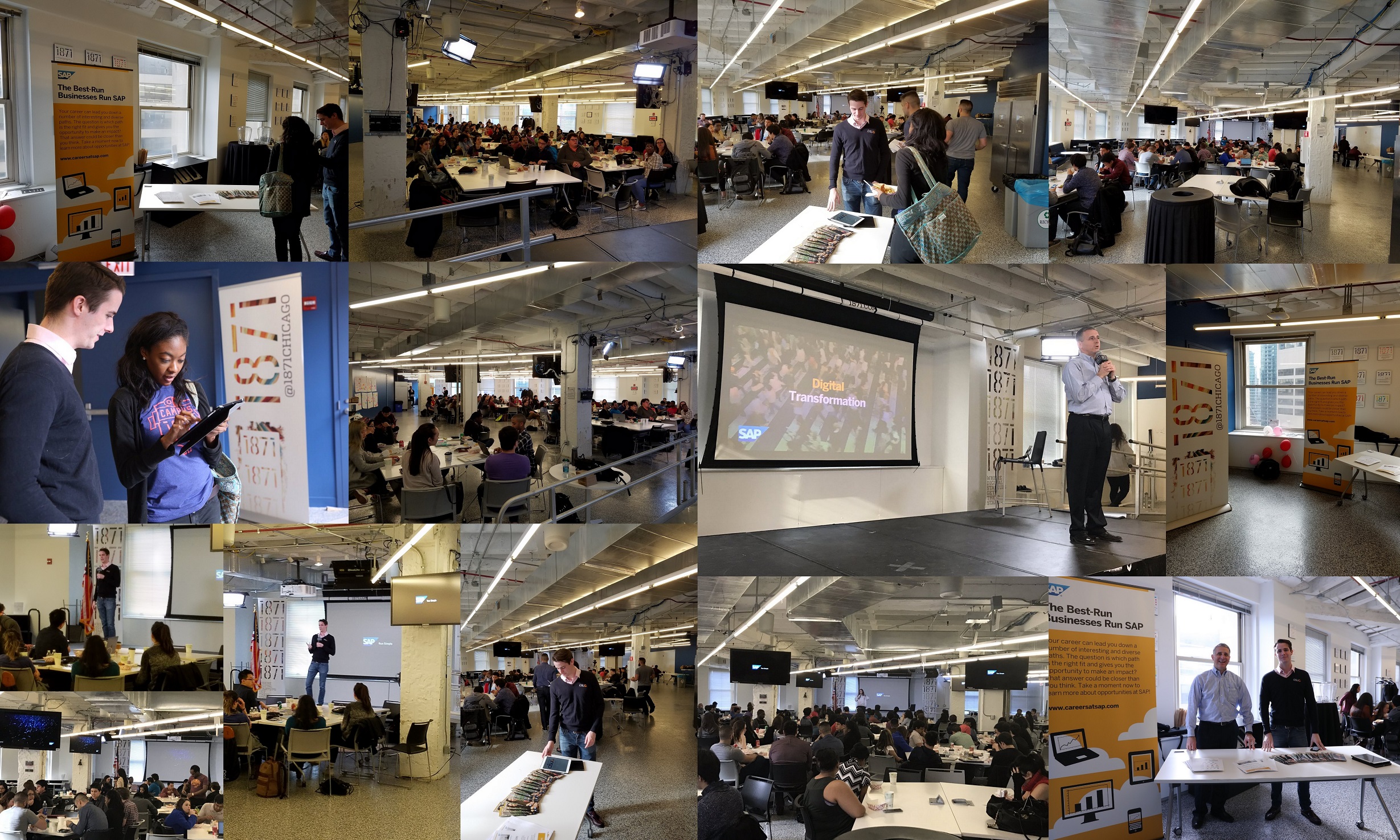 On Saturday April 1st I had the privilege to represent SAP at the Campus 1871 Startup Extravaganza held at 1871 in Chicago. I was joined by Casey Condon of ASUG who followed my comments to students with information about ASUG and its many resources. The SAP Midwest leadership team generously supported the event by sponsoring the Saturday night group dinner which occurred about halfway through the weekend process. Casey and I shared information about SAP innovations and careers both with SAP and the SAP ecosystem. Students were encouraged to join our SAP talent community and sign up for Academy Cube. Following our short presentation, we had the opportunity to speak with many students about internship and full time positions with SAP. Casey also attended the final pitch competition on Sunday which is described below. The weekend was a great opportunity to expose a large group of talented students from multiple universities to SAP and innovation in the SAP ecosystem.

Students were encouraged to work in teams of cross-talented individuals to turn a startup concept into a fully realized business proposal. Students were invited to give a 1-minute pitch on a potential company or startup idea the evening of Friday, March 31st to kick off the weekend. From there, the attendees voted on which company pitches they would like to see become a reality. 10-12 companies made it to the final round so students could choose which of those ideas they wanted to work on as a team. The teams worked throughout the weekend to further develop the idea, create a value proposition, and build as much of the product as possible, culminating in a pitch contest on Sunday, April 2nd in front of a panel of expert judges. Each team was judged on the originality of the idea, as well as the realistic potential of the business, the revenue plan, how well it was pitched and the overall design.

Founded in 2012, 1871 was created to support Chicago’s digital startup community. Since that time, it has become the hub for the city’s thriving technology and entrepreneurial ecosystem. Today 1871 is the home of more than 400 early-stage, high-growth digital startups. Located in The Merchandise Mart, this 120,000 square foot facility is also the headquarters of nationally recognized accelerators, industry-specific incubators, tech talent schools, the Illinois Science and Technology Coalition — the state’s leading technology advocate, a number of Chicago-based VCs, and satellite offices for Northwestern University, University of Illinois, University of Chicago, Loyola University Chicago, Illinois Institute of Technology, DeVry University, and DePaul University.