A few weeks ago Mastering SAP South Africa was held in Johannesburg, South Africa. Analytics, technology and HR was combined into one event. 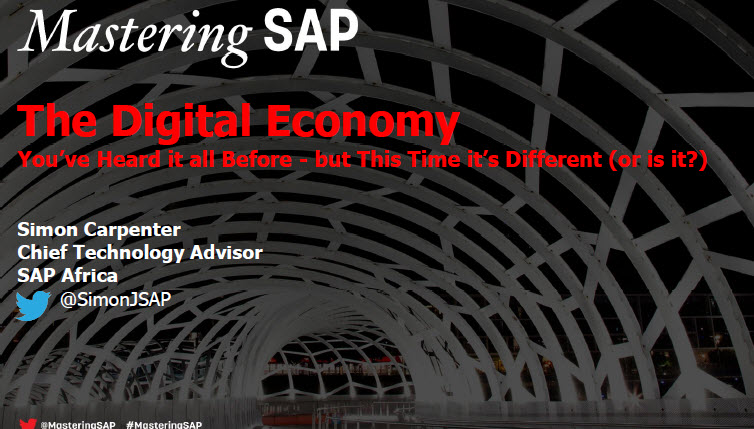 Simon Carpenter, Chief Technology Advisor, kicked off the event with a keynote. 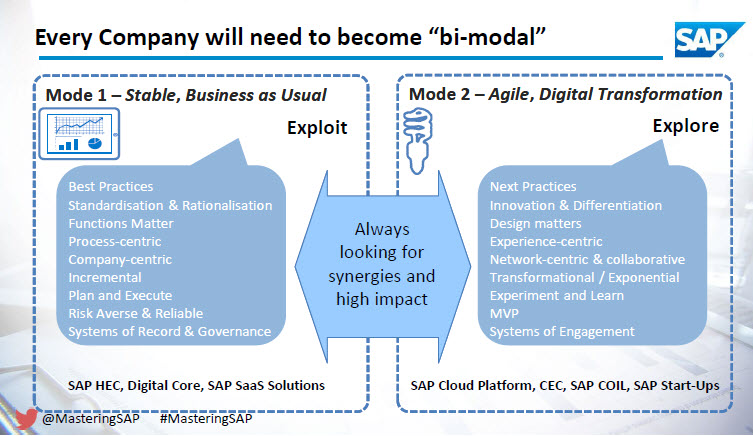 Figure 2: Source: Eventful/SAP
“Everyone company will become a software company” and the bi-modal theme was discussed as shown above.  Simon was a great, passionate speaker. 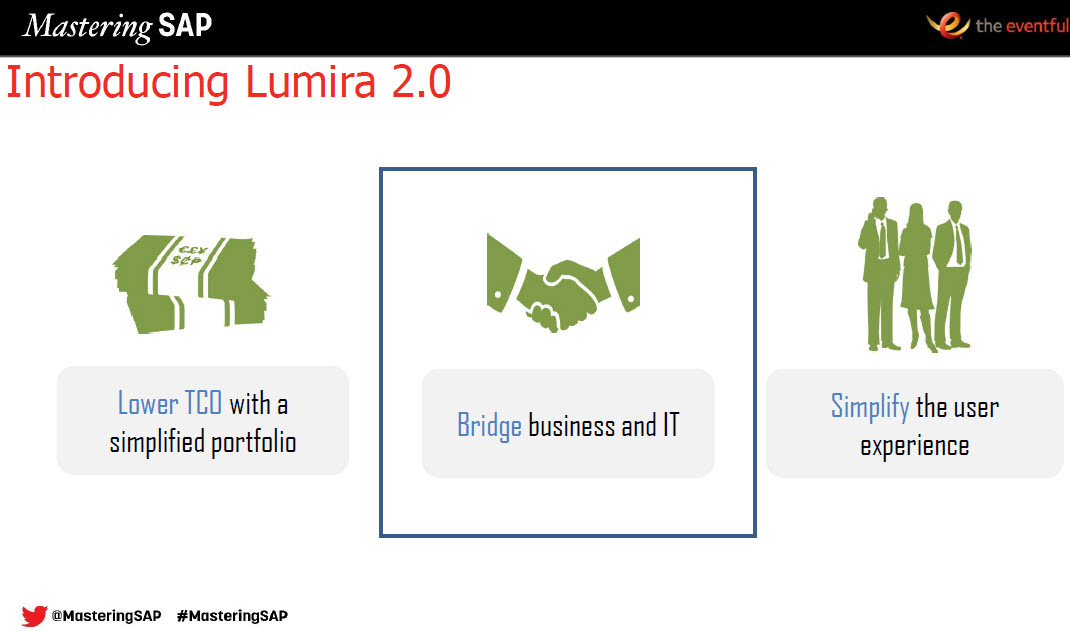 Figure 3: Source: Eventful/SAP
Next, I attended Ian Mayor’s session on SAP BusinessObjects Lumira 2.0. Ian said Lumira 2.0 would combine the best of Design Studio and Lumira and “bridge IT and business”. 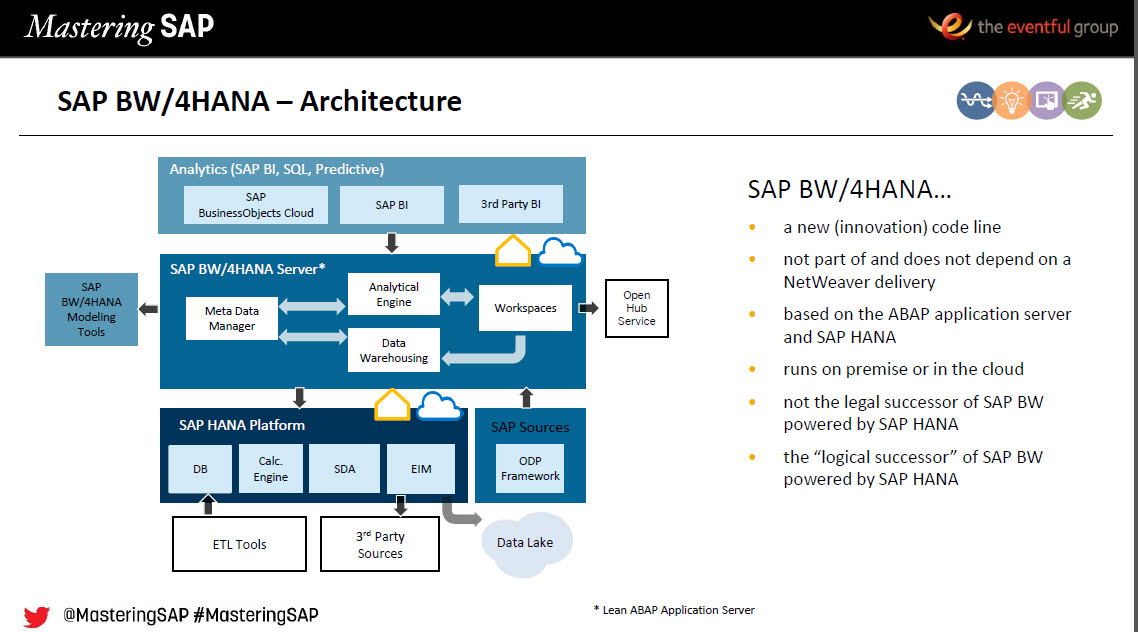 Figure 4: Source: Eventful/SAP
Then in the afternoon I attended SAP’s Lothar Henkes session on Roadmap to BW/4HANA. Lothar is a popular speaker, having had some of the top attended sessions at last year’s ASUG Annual Conference. This conference was no exception.

In Figure 4, he explained that BW/4HANA is no longer dependent on NetWeaver. 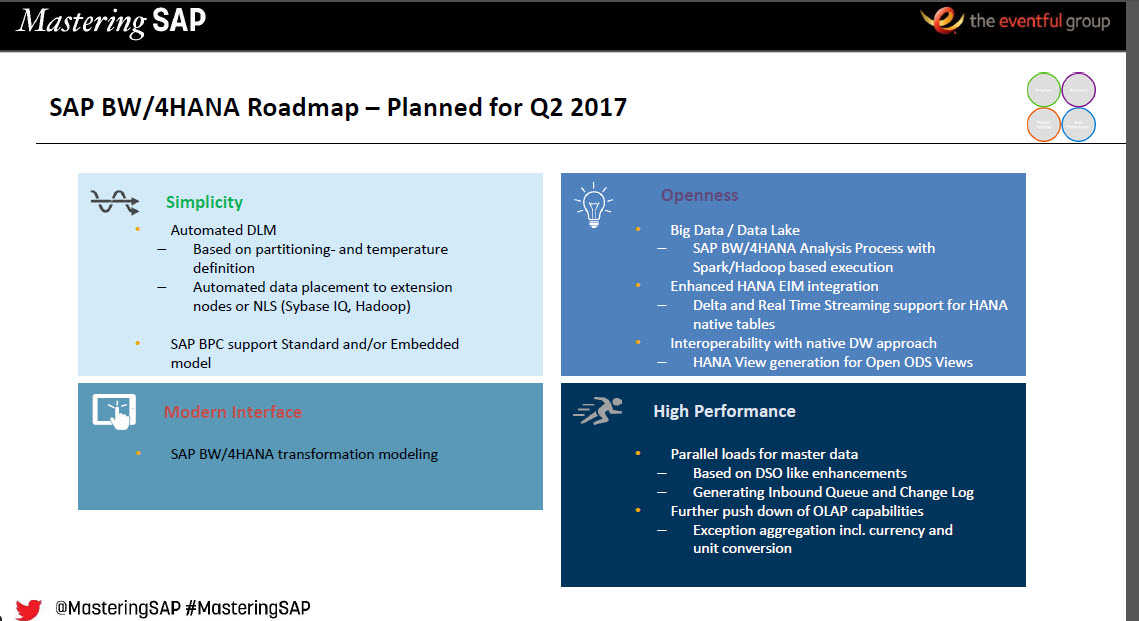 Coming in the SAPPHIRENOW timeframe is BPC support with BW/4HANA 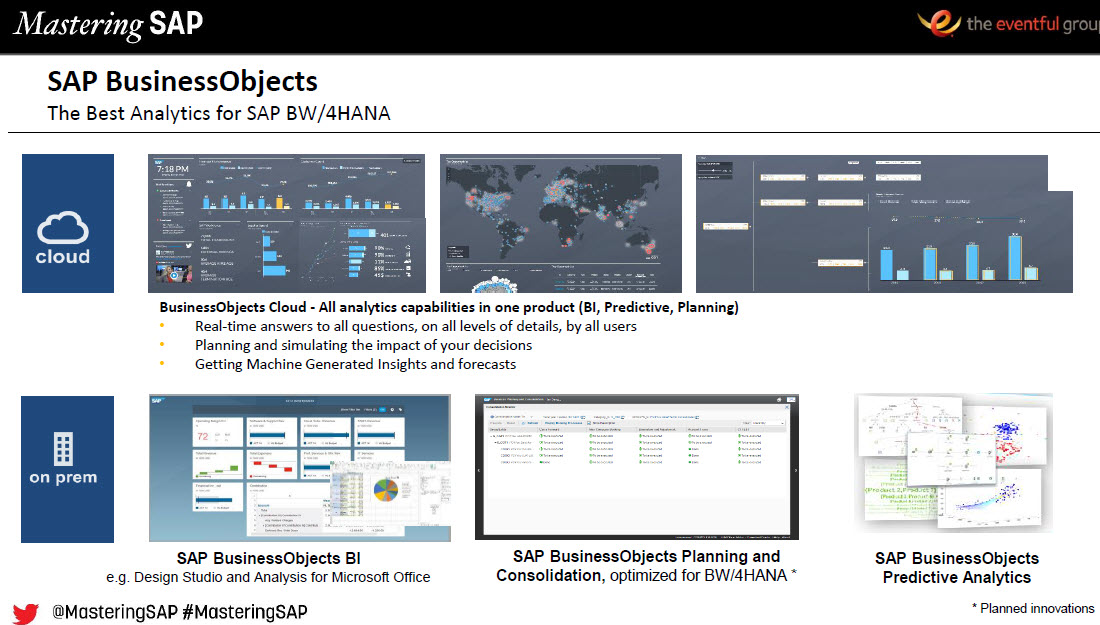 Figure 6: Source: Eventful/SAP
Figure 6 shows the positioning of the analytics tools for on-premise and in the cloud 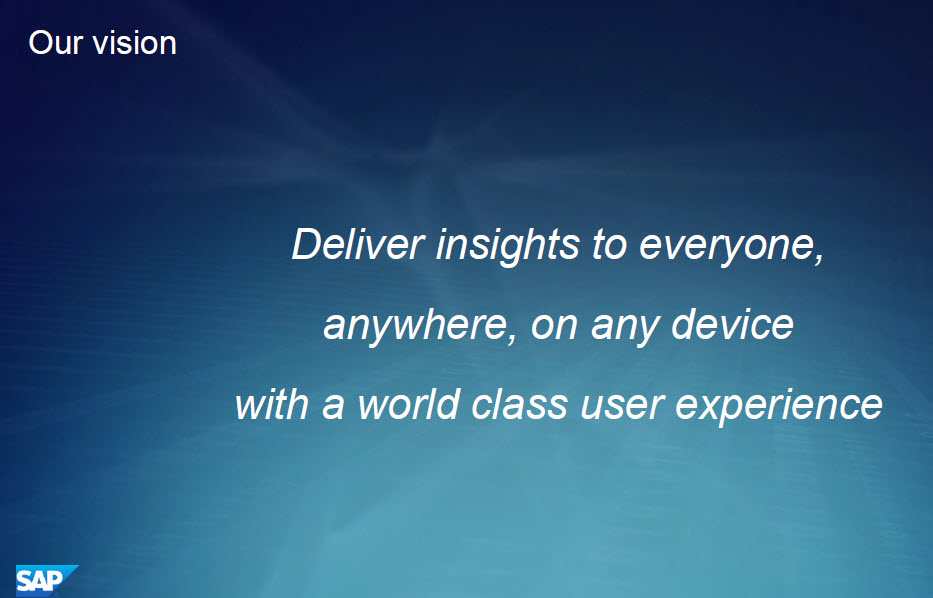 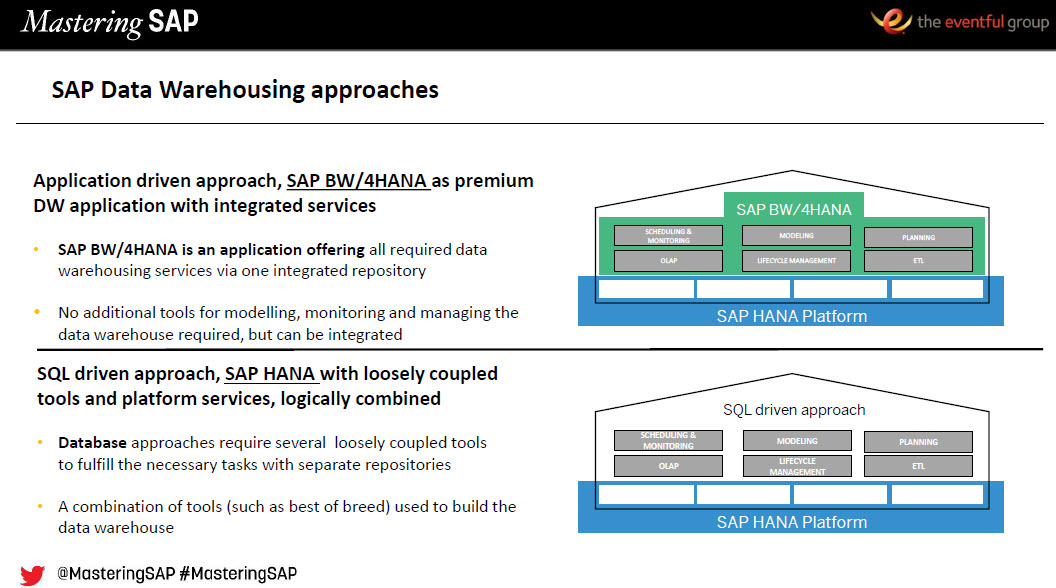 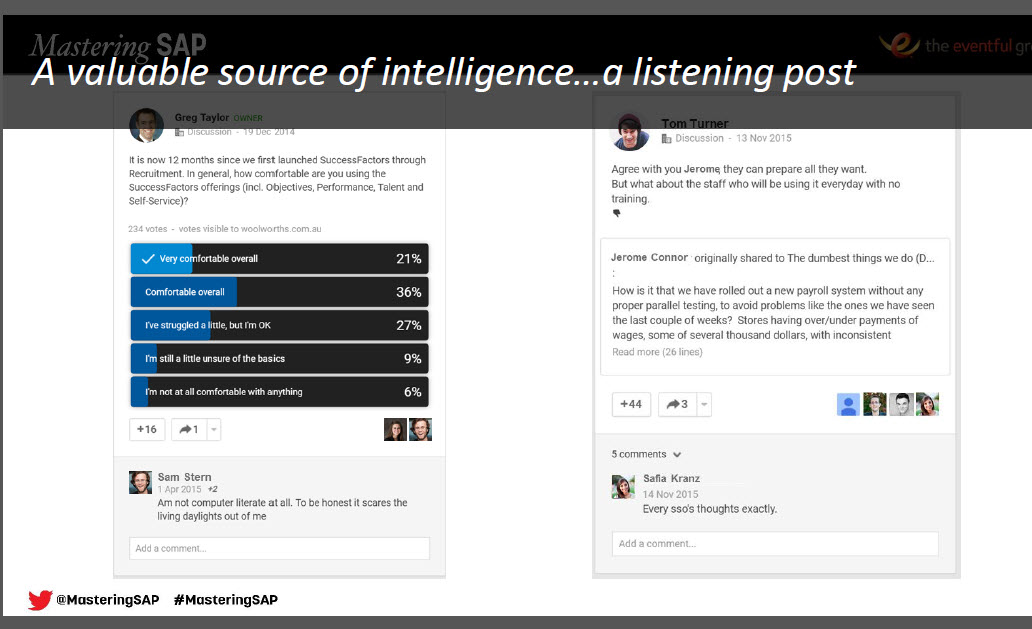 Figure 9: Source: SAP/Eventful
Greg Taylor, Woolworth’s, was the closing keynote. He gave a great presentation on change management in a digital world. I think his keynote will be memorable for me as he asked at the beginning “what’s the difference between Woolworth’s South Africa and Woolworth’s Australia” and then he showed a photo-shopped kangaroo outside the Australia store.

I want to thank everyone I met, especially Chris from Britehouse; we both shared a love for Rodriguez music.  I also want to take the opportunity to thank Marilu Snyders and Gadeejah Jacobs of the Eventful team and the Eventful AV team. “It’s a community, not a conference” – I learned that from Eventful Australia and the same holds true for Eventful South Africa. It was also great to meet fellow SAP Mentor Sven Ringling in person and also SAP Community member Louis De Gouveia.

For more, see my Animoto of the event.  I really enjoyed my time in South Africa – it was a very special experience, hiking with Ntombi, the lovely cheetah: 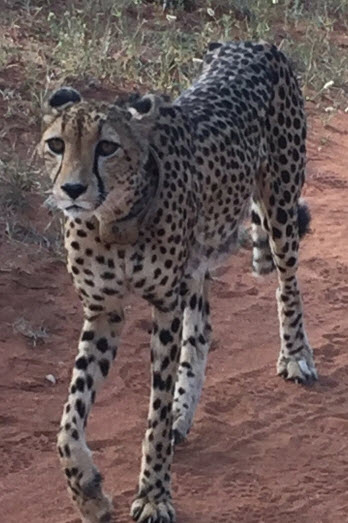 I also enjoyed meeting Becky the elephant, who greeted our 4×4 more than once: 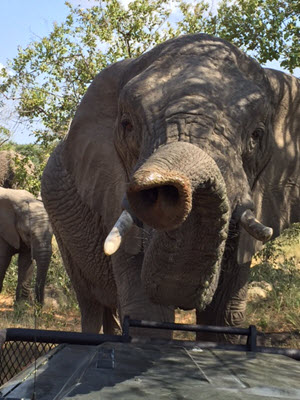 I already miss these “traffic jams”: