Acceleration Entrepreneurs with the “best IoT Program for Startups” 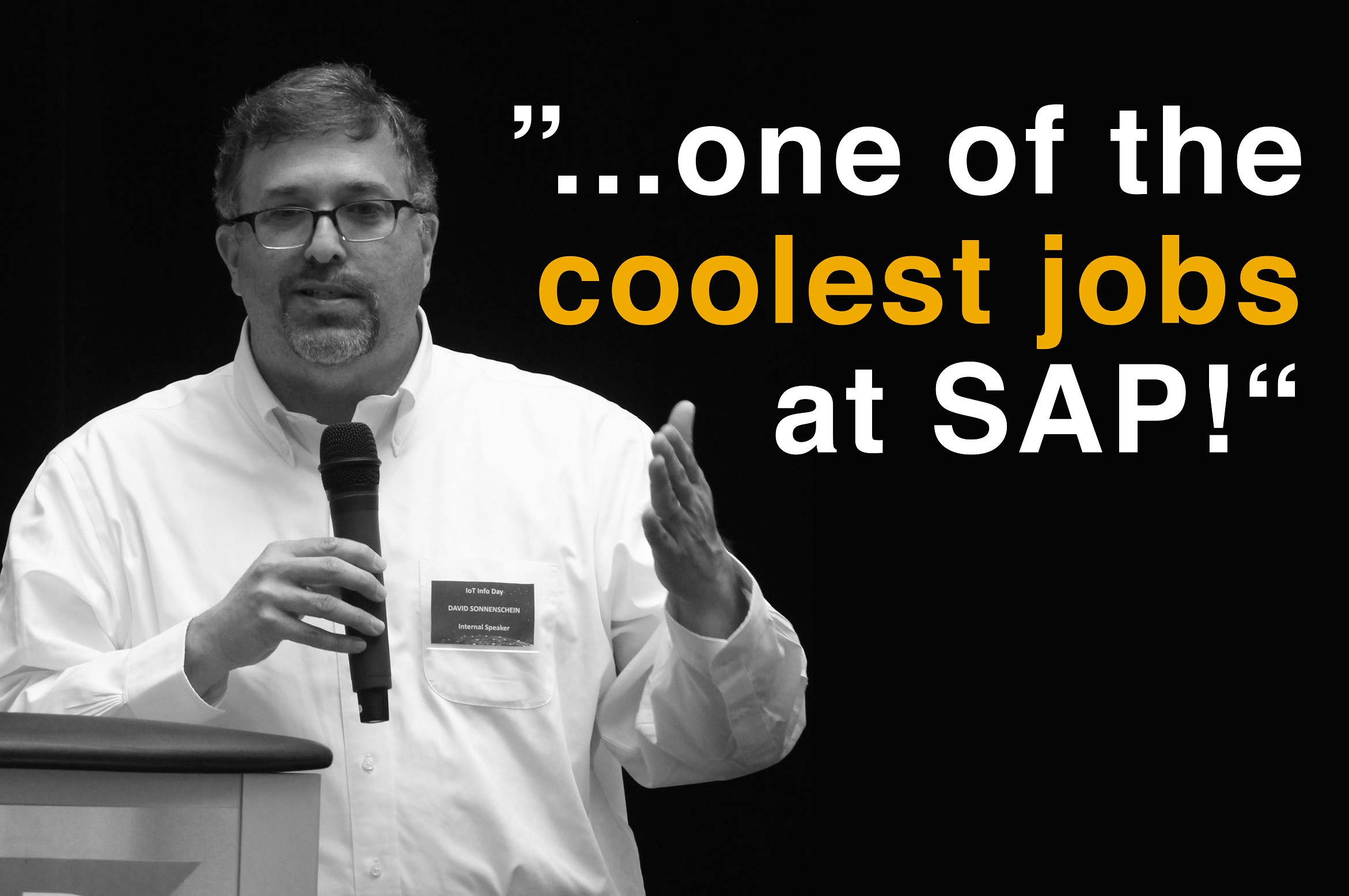 David Sonnenschein, VP, SAP IoT Startup Accelerator Palo Alto gives an insight on his work with startups in Silicon Valley. He is part of Eva Zauke’s team who heads the SAP IoT Startup Accelerator operating from Berlin and Palo Alto. Recently the CEO of a startup David worked closely with, mentioned in an interview that he thinks SAP has “one of the best, if not the best IoT programs for Startups!”.

David, you have worked very successfully with startups for the last five years, what is an experience you will never forget?

I think in terms of startups it changes the way we see SAP with our customers. One of the early startups we worked with was a company called Celonis. They had a new way using HANA and looking through processes that are running poorly inside organizations. They had a good understanding of how to get more out of SAP since they had built a business and a product around it. When Hasso Plattnerheard about it he pulled their CEO up on stage to sit with him and talk to customers about how HANA and startups could make a difference for customers. That blew me away!

You are working with startups in Palo Alto. This seems to be one of the coolest jobs one can get. Is your job actually that glamorous as it sounds?

I wouldn’t say glamorous but I would say it is one of the coolest jobs one could have because you get to work with some of the most exciting and intriguing innovators in the world, tackling enterprise problems in new and different ways. You get to work with good people and you get to think outside the box and find new ways to leverage SAP itself.

You know the startup scene in Palo Alto very well. What in your eyes is the difference between the buzzing startup cities? And what other cities and countries do you find interesting?

I think innovators and startups can come from anywhere, but what is compelling about working out of Palo Alto and Silicon Valley is that eventually they all come here looking for resources, looking for people, inspiration, and partnerships. That’s why Palo Alto and Silicon Valley are great places to meet these companies. You just have a much larger center of gravity here of the companies that have a better chance of succeeding in the world. Now that said, I do think that Berlin is a vibrant startup scene. Other areas like Paris as well as in Dublin or Israel we find certain topics like the Internet of Things being more and more part of the culture. So you can find them from anywhere but the scene in Palo Alto is just a bigger scene, there is a lot more going on than really anywhere in the world.

Did you learn something from startups which was totally new and life changing for you?

Before I joined SAP a long time ago, I had worked with startups and as part of startups, so I am familiar with the process but I will say, that in the work that I am doing with SAP, I really realized that SAP has the best customers in the world which is something startups absolutely need. So it’s a natural partnership as long as we can figure out the right ways to manage it and I think we have found that with the SAP IoT Startup Accelerator.

What are your biggest milestones when looking back at working with startups?

I think having SAP, the SAP field or SAP teams not just embrace the idea, but actually embrace the solution that includes the startup and bring their customers to the startup as a benefit, I think that’s one of the neatest things to see. Its helping the startups succeed but I guess you could say, in terms of our own self-interest, it’s when SAP sees that it succeeds by helping the startup ecosystem succeed as well, that we win together.

And has this already happened?

Well over the years, it has happened numerous times but I would say most recently in the area of IoT, Panoramic Power is a great example of a startup filling a need that makes IoT customers use case possible. SAP could try to sell and try to deliver an IoT solution, like Assets Intelligence Network, but for the Asset Intelligence Network to really deliver value to the customer, the assets that need to be monitored, have to have sensors on them. And Panoramic Power gives us a way of inexpensively and quickly place a sensor on any piece of equipment, anything that draws power. Which means anything, that we think is valuable for the customer to be monitoring can be sensor-enabled. This really reduces the time and friction in getting a real solution delivered. We’ve been doing a pilot with Panoramic Power and a tire retailer since the last half of 2016. We rolled it out in 27 stores over the course of a week. There is a much larger opportunity and this example shows that that there is an economical and proven way of applying IoT quickly and easily. Partnering with Panoramic really reduces the potential risks for the customer. That’s a really important point.
The startups with their interesting sensors, with their robotics capability and all the different things that we are encountering and working with, those are all things that make IoT real and that makes it easier for SAP customers, embarking on a journey with IoT to see the value and actually deliver the value of IoT.

Is there something which has changed in the startup scene in the last five years?

The team started working with startups around Big Data and HANA back in 2012. In 2015, many of the Big Data, HANA startups that we met were actually related to the Industrial Internet of Things. IoT became a driver of Big Data and real time analytic adoption. That was the biggest change. It’s not that there aren’t any other Big Data solutions being built, there are, but the number of startups working in IoT and leveraging SAP technology went way up in late 2015.

Is there a difference between the startup communities in different countries?

The difference has a little more to do with the business environment. The sort of mentality, the entrepreneurial spirit and all that is similar in different countries, for the most part anyway. But the access to capital, the access to mentors and people who will engage, is significantly better in Silicon Valley and a handful of other locations around the world. So you can’t just go to any city and find an entrepreneurial spirit, but our startup centers in Palo Alto, Ireland and Berlin all have that going for them to one degree or another.

It comes in waves. For instance, Israel has a lot of security related startups. Germany in general and Berlin has a lot of sensor and manufacturing or industrial related startups. I would say Palo Alto has a lot of analytics. Palo Alto has the broadest environment but its IoT solutions – at least the enterprise ones – tend to be around delivering insights from sensors and delivering platforms for doing work in IoT. It’s different in different parts of the world, but again you can find a little of everything anywhere where there is a thriving startup community.

What is difficult in your job? Are there some things which always come up?

I think there are two things that are consistent. One is, there are a lot of great ideas and a lot of great people in the startup community but assessing teams and ideas and identify those who can execute and have at least the main elements of a business model that is compatible with what our customers are looking for, is a challenge. Like I said, there are great people so you want to work with them, you are interested in their ideas, you love their passion, but you actually have to dig a little deeper and see whether or not they have the other elements that are necessary to be successful. The corollary to that is, you can never know for sure until you’re already done, until you’ve gone through the process. You’re going to be wrong too and you have to be able to absorb that. Everyone needs to acknowledge that risk.
Another challenge that we have, is that we are a small team in a couple locations of the world and SAP is a massive company with people all over the world. Telling the story of our startups and telling the story of how we can accelerate customer success with IoT through our startup ecosystem, is actually a pretty big challenge.

Have you ever considered founding your own startup?

As I’ve said, I’ve been part of the founding team of a few startups before I joined SAP and we had a certain degree of success and I enjoy the startup environment but I also… I guess the short answer is: Yes, I have thought of it and I’ve been part of it. Where I am right now I am excited about because I get to meet some of the best startups in the world every day and its new and different every day. I enjoy what I’m doing. But sure, it is a continuous sort of pull. When you think about what’s happening in the industry it is tempting to just go and do it yourself. Yes, I do think about it. [smiles]

Recently a startup you have worked with called the SAP IoT Startup Accelerator program one of the best IoT programs for startups. What is the secret of your success?

I think there are a couple key elements. One is the real respect and empathy for the startups themselves. SAP is the number one business application software company in the world and that gives us a certain customer base and understanding of the industry: every person on the team here is coming from a deep love and respect for SAP but has that same kind of respect and interest in the startup passion and the startup ideas. So, one piece is really having that empathy to understand how the startups actually work and finding ways to help them be successful. I think the other main piece is that our location inside the Digital Assets and IoT organization provides a mechanism to give access to customers. This is important for startups for validation of their ideas and even as places for early sales and success. That is different from most of the other accelerators out there in the world.

Are there any wishes and hopes for the next months and years from your side?

I want to see the area of collaborative robotics get more attention within SAP and I want to keep looking for more startups like Fetch Robotics, that are doing great work in that area. Drones and IoT is an important topic as well. I want to make sure that we are on top of these as SAP and that we are taking advantage of that kind of innovation. Another area is better incorporation of artificial intelligence, deep learning to tackle problems related to IoT. I would say both of those are key elements for 2017 for the team and myself.