This blog is part of the blog series HANA based BW Transformation.

The following list is based on experiences with real customer messages and is intended to help customers learn from the mistakes of other customers.

Some SQL Script best practice tips could be found in chapter »Best Practices for Using SQLScript« inside the SAP HANA SQLScript Reference.

Here are some general SQLScript recommendations:

Within the BW all fields are defined as NOT NULL columns. Therefore, the developer is responsible to ensure that all data inside the result table of a SQL Script routine are initialized type conform. The SQL function COALESCE could be used to avoid NULL values and ensure that all values would be initialed correct in case of NULL values. Characteristic sample:

In case of numeric field, it is important to initialize the field by a numeric value. The default initial value for a numeric field is 0 and not ‘’. Key figure sample:

The optimizer tries to push down the filter as far as possible to the source to keep the data volume as small as possible. It may have a negative performance effect if the filter push down is prevented.

For further information about in-lining see HINTS: NO_INLINE and INLINE. The hints could also be used to force or prevent inlining for a single select.

Also the usage of Imperative SQLScript Logic prevents that the optimizer can inline the single SQL statements. Therefore the recommendation is to use declarative SQLScript logic to implement the SQL script procedures in the BW transformation context, if the logic allows it.

Use of imperative SQLScript logic

The procedure SQL code would be translated into L-coding in case of using structure control elements like LOOPs or IF-conditions or declaration of local variables, see Figure 9.1. 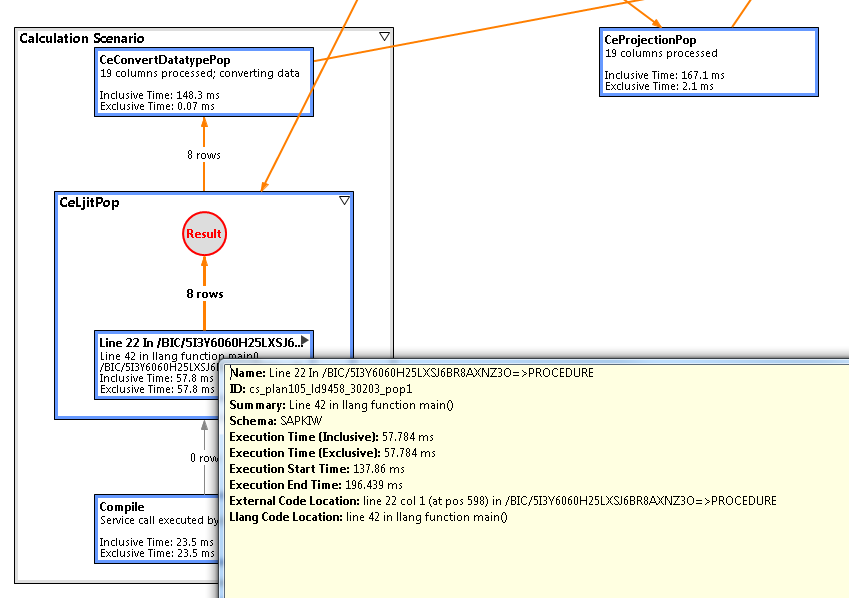 Sometimes it makes sense to test if one of this features would increase the performance.

within an AMDP method will lead into the result 'ABC'.

The expected blanks are not available. To get the expected result it is necessary to set the space by using the CHAR Function (String).

delivers the expected result 'A B C'.

Keeping the internal table small is a general recommendation and means always check your WHERE condition twice. While processing the Calculation Scenario by the calculation engine it is necessary to materialize some Calculation Views. Materializing views means allocation of memory. From performance and memory allocation perspective we recommend to reduce the data volume as soon as possible, see paragraph 9.1.7 »Use of DISTINCT«. Inside all SAP HANA engines try to push down filter conditions as close as possible to the sources.

A join can multiply the number of resulting rows and in case of selecting only a subset of the whole width a DISTINCT can reduce the resulting number of rows significantly.

The customer coding below results in an internal table with more than 700.000.000 rows.

By adding DISTINCT to the statement the number of rows could be reduced to 1.300.

9.1.6 Potential pitfall at UNION / UNION ALL

The following aspects should be considered when using the UNION operator.

The individual SELECTs in an UNION can base on a persistent database table or an internal SQL Script (iTab) table. By combining several SELECT statements to a new result table one must pay attention to the column order of every single SELECT statement.

Figure 9.2 shows in (1) and (2) two table definitions with the same columns but the column order is different. (3) shows a structure definition for the output parameter of the procedure in (4).

The first UNION in (5) uses the * operator instead of an explicit column list (see comments). The column names of the resulting tables are based on the columns (“CHA_01”, “CHA_02”, “KYF_01”, “KYF_02”, “RECORD”) from the first SELECT statement. The datatype from the third (KYF_01 / RECORD) and the fifth (RECORD / KYF_02) column of both SELECT statements are different. The 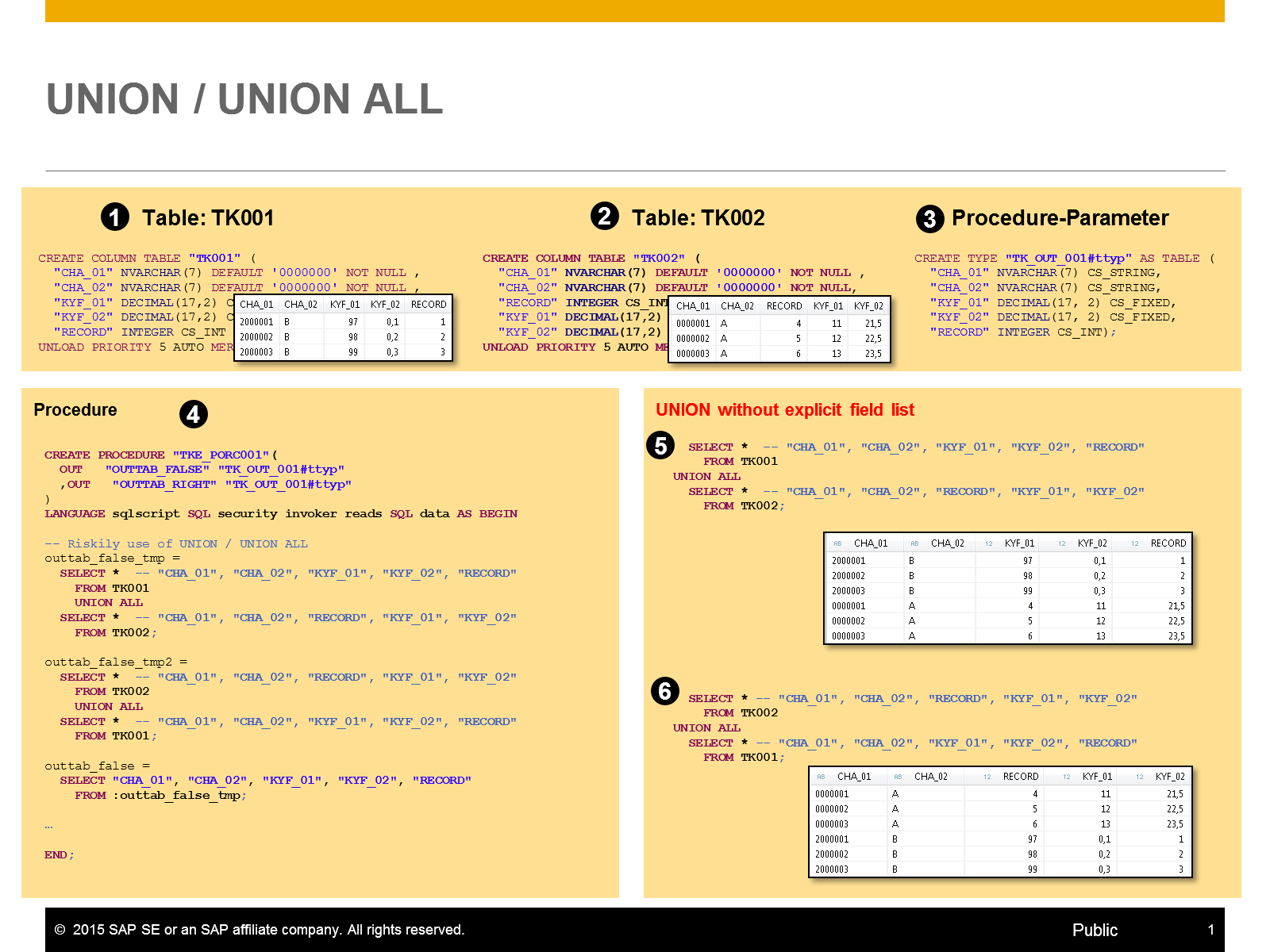 The process logic for an AMDP field routine is based on every value in the column for the source package which is currently being processed. That means, if the AMDP field routine be called all values from the selected input fields are handover in one call. In Figure 9.4 only one source field is selected. Therefore, the table base input parameter for the AMDP routine contains one data column. There are further technical columns in the input table.

The transformation process expects thus from the AMDP field routine an output table with the same number of rows as the input table!

To get a better understanding why this is so important I’ll provide some background information about the runtime processing.

A field based AMDP routine is embedded in a Calculation Scenario. For more details read through HANA based Transformation (deep dive).

This enables the underlying engine to parallelize the transformation process.

After processing the field routines and the other rules it is necessary to bring the results together. To do so one must bring all three data packages in the same order. Each data package contains two technical columns for this purpose. The Calculation Scenario contains an order projection for each processing thread to align the data of each thread in the same order.

The vertical union brings the separated data packets back together for further processing. 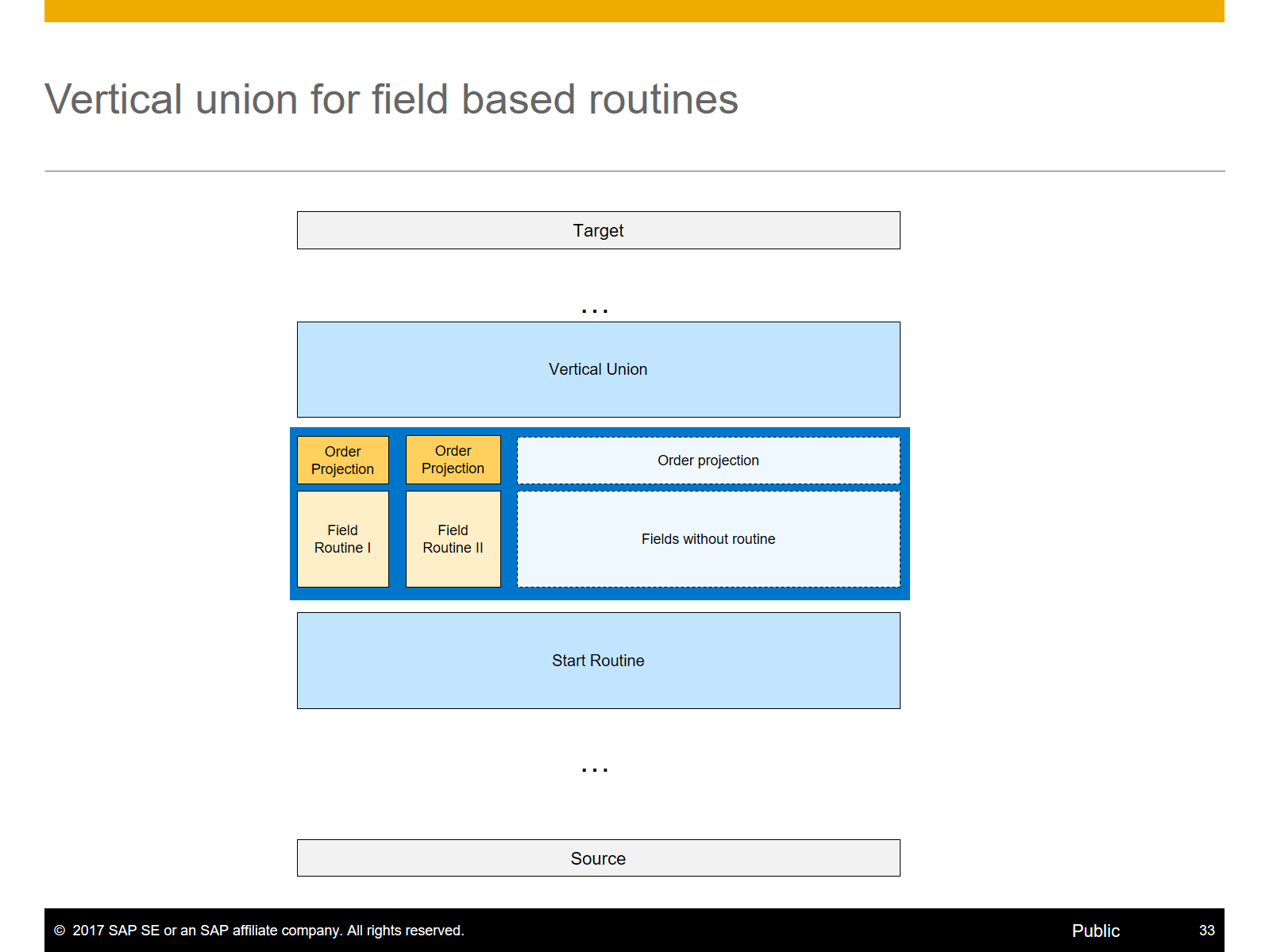 Regarding the split packages, there are two prominent difficulties:

9.1.7.1 Changing the number of rows within an AMDP field routine

The following coding example should set the attribute Vendor (TK_VENDOR) if there is a vendor for the material (TK_MAT). The last part of the where condition (and mat.”/BIC/TK_VENDOR” <> ”) filters records without a vendor out. This can reduce the number of rows.

Listing 9.1: Example of a field routine that removes the records

Figure 9.6 shows a further example routine that makes removing rows possible. (1) shows the whole data package we get from the source object or from the start routine (2) shows the package split. Here we can see that each package gets two additional technical columns to the existing data column(s) SQL_PROCEDURE_SOURCE_RECORD and RECORD. For further information on these two fields go to my blog HANA based BW Transformation – New features delivered by 7.50 SP04.

(3) shows the field routine source code and the other transformation rules. The field routine logic doesn’t write all rows from the input table into the output table. The row that wasn’t transferred is crossed out in (4). The resulting data package is shown in (5). We get a NULL value, as seen in (6), based on a pitfall in the coding.

Additionally, to the NULL value a part of the data package is moved. The back values are moved up by the missing row.

NULL values are not allowed in BW and therefore the DTP leads to an error. 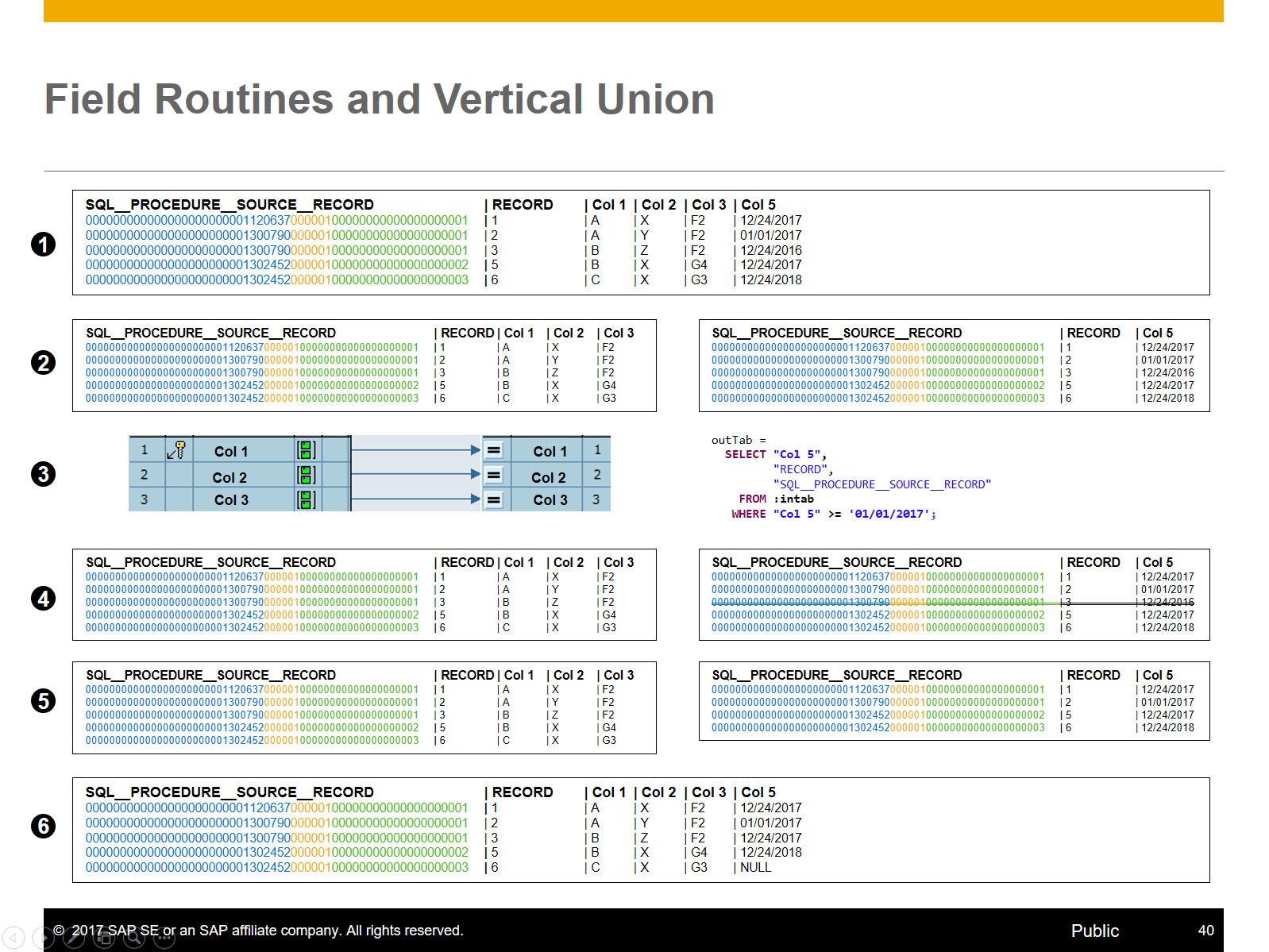 In both cases, the Listing 9.2 and in Figure 9.6, the misconduct may occur but not necessarily. Often the test data in the development are well prepared. This means the error should not occur.

Figure 9.7 provides an example to avoid the pitfall. The not wanted values are replaced by an initial value. 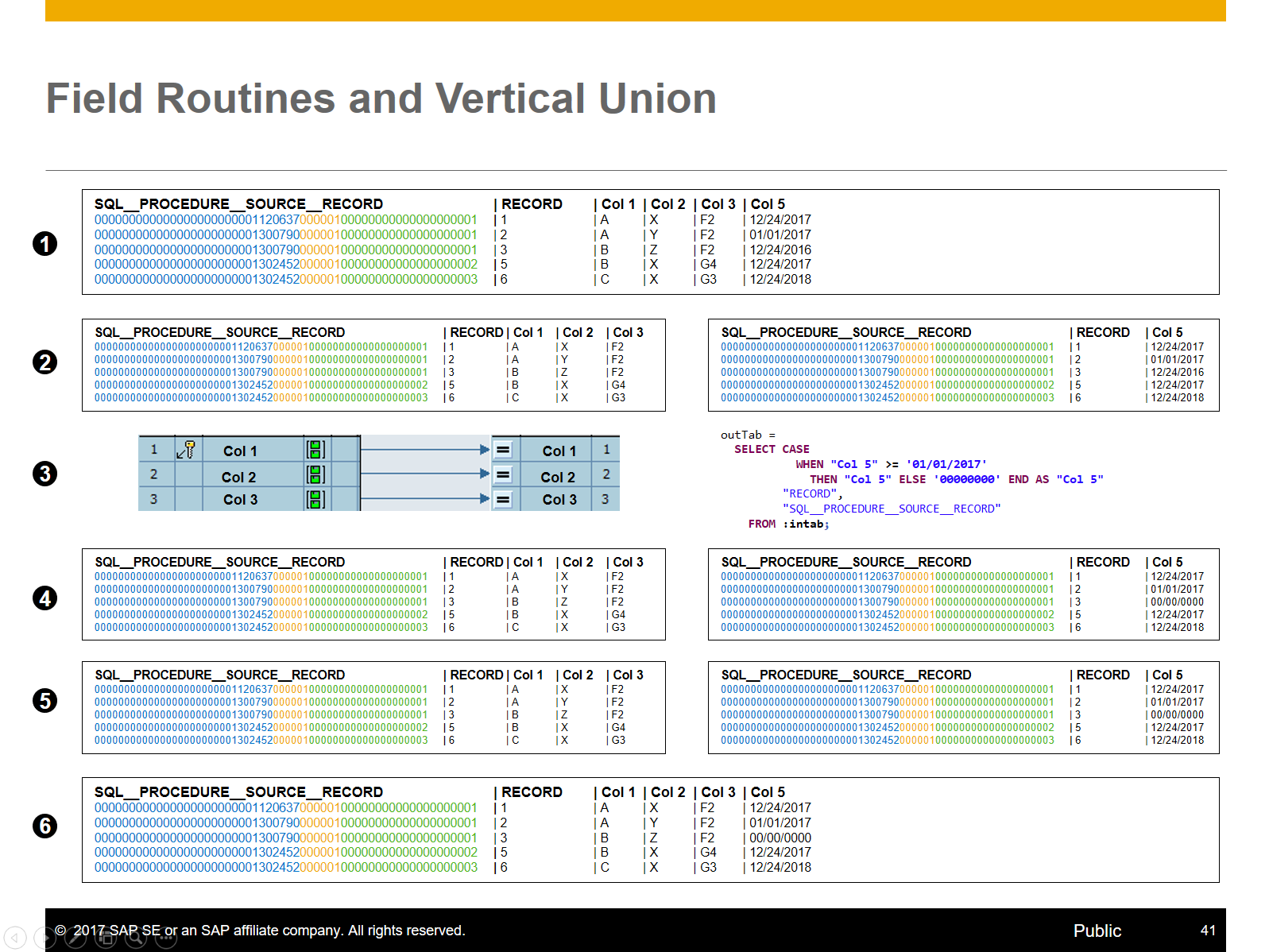 9.1.7.2 Changing the sorting order of the data column within an AMDP field routine

Within a field routine it is important to keep the sorting order for the data column. Therefore, do not change or delete the values from the two technical columns SQL_PROCEDURE_SOURCE_RECORD and RECORD. It is also not possible to add or delete rows.

Figure 9.8 shows how data can be sorted and how not. (1) shows the input data with one data column (Col 5). In case it is necessary to sort the data from Col 5 it is important to keep the order stable regarding the two technical fields SQL__PROCEDURE__SOURCE__RECORD and RECORD.

(2) is a negative example that showing a potential source of error by changing the sort order. The next step after the field routine sort the field routine data (outTab) over the two technical columns. In case (2) the resulting order is not determined.

(3) shows the way how the data can be sorted by the data column with keep the sorting order stable regarding the technical fields. 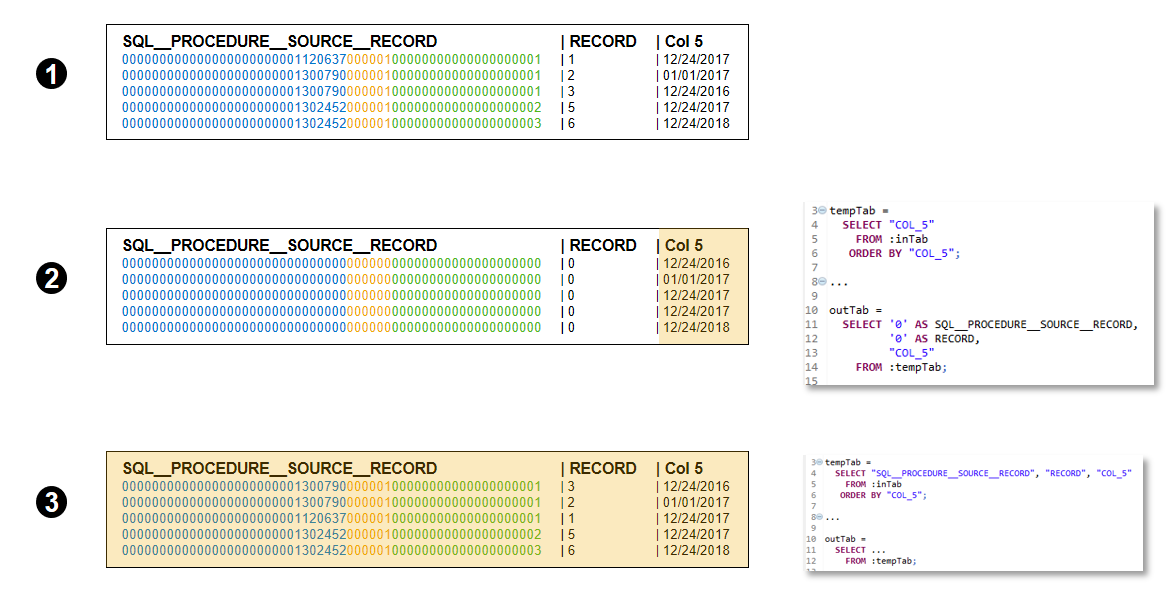 Figure 9.8: Changing the sorting order of the data column within an AMDP field routine

Changing the sorting order of the data column causes errors when merging the individual packages.

This kind of error is very difficult to identify. The result does not lead into a technical error. Only the values from one or more columns are in wrong rows.

The general purpose and our recommendation for field routine is to implement logic which cannot implement as formula. Some formulas could prevent a push down, see note 2423215 – SAP HANA Processing: Non Supported Formulas in HANA Transformations. This kind of formulas could be implemented as a field routine.