Why I Write My Blog In German Language

Some of you know me as an SAP programmer and ABAP nerd. Most german colleagues know my german blog tricktresor.de which could be translated like “tricksafe” (a security container to store very important tricks in). This blog is completely written in german which might be a reason that you are not aware of my website if you are not german.

In this post I would like to tell the story of my Tricktresor and in also explain why I do write in german language on my own website instead of writing in english language using SDN.

My story starts on a rainy day in a little city in the middle of Germany. The year is 1995 and I am apprentice at SIEMENS NIXDORF Informationssysteme AG. I do my practice in a team that just started to take interest in SAP consulting. I think the release at this time was 2.1 or something like that. I took part in an ABAP course that all members of the team participated in. Every consultant should know how the SAP system works and how the programming language ABAP looks like.

From this time on I was infected by SAP. I liked the huge system and the possibilities in all the different areas.

Not much time ahead I started to write my first little reports and did some forms with SAPScript. I found out that not many like SAPScript. I did because most things were simple if you understood how it worked. I learned a lot these days. My mentor at this time was Karl Pichler, a very calm and gentle Austrian. He was very thoughtful and everything he did was quite slow and staid. But he was really an IT expert. Karl had one quirk: He wrote down everything he talked about and everything he learned in his laptop. For every customer he had his own text file and for every “element” he had an own identifier (or tag how you would call it nowadays :).

& + initials described a person. The identifier for me was &EW, John Doe would have been &JD.

Function Modules where tagged with #FM, Reports with #RE and so on. Example:

He logged very extensivly every detail of what he programmed and the essence of discussed issues. I thought: He’s an old man; he cannot remember that good anymore. I was in the early twenties, so every “man” was an old man for me… 🙂 He took me out to the customer and I had to do change some forms. We have been at this customer for a few weeks and while I looked up to him because of his know-how I smiled at him because of his elaborated notes.

Document Everything You Learn

From that day on I realised that it was not weakness of the elderly to document everything but the other way round, the wisdom of the age. I also created files where I documented everything new I learned. After a while I thought that it would be nicer to have some kind of structure in the document. So I installed CueCards which was and still is a very good freeware tool for organizing information.

Again some time later I also got wiser and smarter and I didn’t have to document so much as before. Especially when I worked longer on one specific issue like SAPScript or lists I didn’t need to have my laptop turned on all the time. in the 90s it was still unusual to really work with the laptop at the customer. Normally the customer provided a PC workplace to work on. And starting a laptop with Windows 98 took quite a long time. So I was kind of bugged to wait for my little b/w laptop to be ready for searching files. I decided that I wanted to have my stuff in the internet so that I can access my knowledge from any PC with internet connection.

At this time a friend of mine programmed a content management system named “MagazinEngine” based on a not well known feature of the Internet Explorer: Inline editing.

The CMS was quite simple but very effective. I could create pages and articles. Each page could have sub pages so that I could build up hierarchical content. That was nearly the same as I classified my notes in CueCards.

The Tricktresor started in year 2003. In this year WordPress also started but my “MagazinEngine” was way better. The best when using the CMS was the inline editing feature. I was able to edit the content directly in the webpage. WYSIWYG at its best. There were some minor bugs but at least it was the perfect tool for collecting my knowledge. 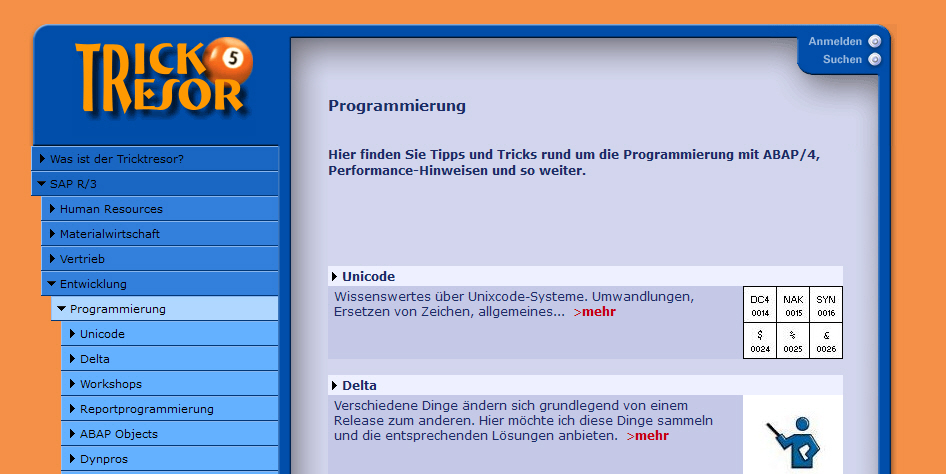 After my apprenticeship at SIEMENS NIXDORF I started to work in the same company but located in Hannover, the capital of lower-saxony. I had a great boss and very smart colleagues. I still learned new things every day. If I had a problem I could ask someone in my team and they often helped me. If there they couldn’t help me I searched the internet. But everytime I searched for “ABAP” I got one of the following results:

I also realised that my colleagues had a good knowledge on lot of things but very often if I had to dig deeper they couldn’t help me anymore. I had to research by myself, debug and test to make things work.

When something worked out fine I added the code, the problem and remarks to my “2ndBrain”. 2003 I started to transfer my notes to articles of my new website. I was very aware that all the other stuff in the internet often did not help me finding a solution to my problem. And I wanted to make it better than others. I wanted to describe the problem exactly and provide the solution for it.

Please read my article The Problem Is The Solution if you are interested in some more details.

The German Part Of The Story

Ok. I wrote a lot more than I actually thought I would… 🙂 But let’s come to the reason why I originally wanted to write this article.

There Is A New German Blog

I blog about ABAP problems since 2003 now. At this time SDN did not exist and it seemed that everyone was busy in solving his own problems. There was no platform where I could contribute (except of bulletin boards). But I wanted to because I learned that documenting a solution and therefore rethinking the problem helped me a lot to get better. I don’t know why I was so fond about sharing my solutions but I was.

So I started my own website to share my knowledge. It was obvious to start in german. Describing a complicated fact is hard enough. I didn’t want to make it harder by expressing in a foreign language. I also had no reason to write in english because my intention was not to reach as much people as possible but provide information that makes sense instead of having a collection of information without rhyme or reason.

Although I can read english language and can express myself on a fair level I find it difficult to understand english texts. I also like playing with language and like to be kind of funny or at least not to sound too seariously and that is quite impossible for me in english language. I have never lived in an english speaking country and I am sure this is the only way to learn the odds and ends of a foreign language.

As I am writing this article I switch to dict.leo.org within nearly every sentence to be passably sure that my thoughts come out in english as I intend them to be.

Why I Stick To The German Language

Time passed by and the SAP community got bigger and bigger. SCN and SDN came to live, there were more and more SAP events and SAP itself established more and more as an ERP software.

It was clear that the community all over the world would discuss SAP related topics in english. I realised that and I decided to switch my blog to wordpress because the old CMS was not able to manage multilingual content. To be able to blog in german and english was not the only reason to transfer my blog to wordpress but one of them.

I now have the ability to translate my articles to english but honestly… puhhh. It’s really a lot of work. I spend a lot of my free time blogging about SAP and ABAP and I am not very keen on having much more work to do.

From the beginning I wrote nearly 700 articles and I rarely get feedback for them. Most people like that they get good edited content but very few people are willing to also write articles. Some people did a few times and then stopped. Some asked if they could help but after I explained what I expect they instantly quit.

So that’s the next reason for me for writing only in german: Writing the articles, preparing the code, posting the solution helps me to learn. The articles itself help me to remember. So why should I write an english article for me?

Anyone who knows me knows that I enjoy sharing my knowledge. As the SAP Community became larger and larger I was addicted to all the people who also share their knowledge, who love to learn and provide help and aid. I wanted to be part of this community. Of this community that is mostly speaking english… How could I indicate the community to my knowledge.

I started to engage in SCN bulleting boards but it is like in real life. You should know each other to have some kind of confidence and faith. I felt lost in all these thousands of people all over the world. There were so many topics. So many products. So many kinds of problems. I felt safe in my little world where I am the master of information. I can decide what the site has to look like. I have an overview of my articles. Therefore I rarely contributed in SDN (and for some others reasons). I am active in the german bulletin board abapforum.com where I also feel safe because there are only german speaking SAP people and most of them are programmers. There are just 20 members I would say who constantly help others during many years.

But there are a lot of german speaking people I met who solely move around in the english speaking community. For this reason I sometimes try to post my thoughts about programming, documentation, thinking and general things in the community. It’s really some kind of splitting information. Technical things come to Tricktresor and more general thoughts go to blogs.sap.com.

I feel that there are so many experts who can help and provide technical information so much better than I could do. And again I feel lost more than ever in the new community, because there are more products than ever and I don’t understand the structure of the blogs. In old SCN there were at least sections and areas and now everything ends up in one blog. (There is still no adequate tag for blog posts like this…)

That is the reason why I only post in my personal blog at people.sap.com/enno.wulff. Everyone who follows me can have part in my thoughts and ideas. All others would supposably not because I think a lot of people feel the way I jst described. You take an interest in people you know but not in an anonymous mass.

Finally let me say that I am proud of my Tricktresor and also proud to be part of the SAP community.