A Blindspot of User-Centricity (3 min read) 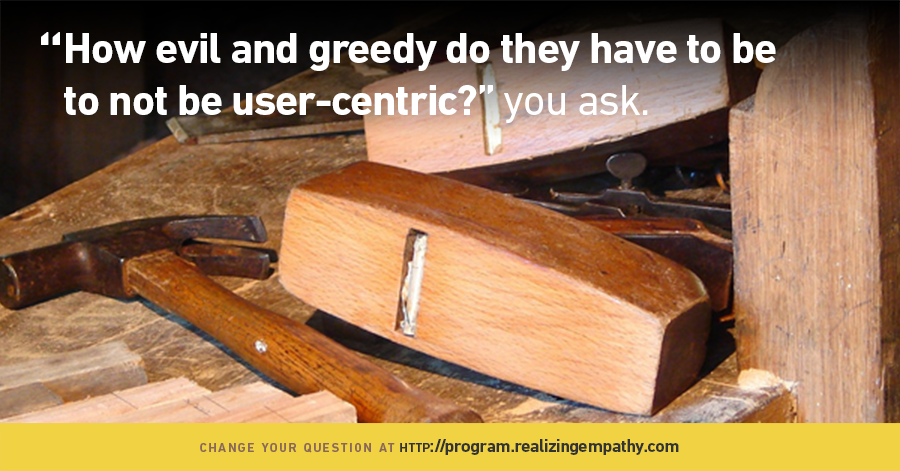 There was a time in my life, when I had a hyper-focus on user-centricity.

I met with users in person. I spent hours listening to their concerns. I genuinely felt for them.

When I returned to the office to transcribe every word they had said, it all came rushing back to me. I remembered some of them tearing up with gratitude simply because I was willing to listen. Empathizing with these users… That was probably one of the most fulfilling part of my job.

But then… Upper management entered the scene, and messed things up. They would come up with all sorts of excuses to either cancel the product we were designing for these users or kill the feature that these users most needed!

“How dare they?!” I proclaimed with great indignation. “Can’t they see how much goodness this project could bring to the world? How evil and greedy do they have to be to do such horrible things?”

So furious that I was determined to solve this problem called ‘upper-management.’ It was clear to me that it was the thing getting in the way of bringing about a better world.

I never solved the problem.

I eventually ended up leaving the world of design, thinking to myself “There’s got to be a better model of innovation.”

This question lead me to research how artists innovate differently from designers.

One day, during the course of this research, I found myself in a woodshop. I had come into the shop with a beautiful vision of a chair I wanted to build.

My vision of the chair was not only aesthetically pleasing, but also highly ergonomic and comfortable for the potential user of the chair. I could not wait to finish it!

But then… The wood started to mess up my vision. It refused to bend in the exact way I wanted it to bend so I can make it feel comfortable for people to sit on it!

“What a piece of crap?!” I proclaimed with great indignation. “What good is a material if it can’t bring value to its users?”

So furious that I was determined to solve this problem called ‘wood.’ It was clear to me that it was the thing getting in the way of realizing my vision of a better chair.

I never solved the problem.

But this time, I did not leave wood behind in search of a “better” material. I thanked it for teaching me a valuable lesson.

Users are important. Yes, they are.

At the same time, they are a part of a larger whole. There are many kinds of people involved in what we call the “design process.” Unless we think of all of them as human beings with equal dignity, it becomes exceedingly easy to treat any one of them as mere problems to be solved. This is a natural blindspot that develops when we hyper-focus on a single group of individuals.

Please don’t get me wrong… Doing this is easier said than done. It takes great energy, not to mention skills to do it. Skills that fall under the umbrella of realizing empathy.

In fact, even after having learned my lesson, I still notice myself treating people as problems to be solved.

So what I now do is pause to ask myself this question. “What is it that I’m having difficulty appreciating about the other person that makes it so easy for me to resort to treating them as mere problems to be solved?”

I have a feeling I’ll do this until the day I die.

p.s: I’ll leave you with a video containing my honest reflection on how I treated a close friend as a mere problem to be solved. That story begins at 4 minutes and 30 seconds in.

What a great story and outlook!

Definitely we could all use a little more empathy - especially in design.

I like your reference to the artistry of wood carving...that meshes with some thoughts I have been having on the practice of end user research recently.

I've started to think of end user observation as going into the Artist's Studio.  The environment may seem messy and chaotic.  There may be odd scraps of paper, cloth, and obscure tools (some I know use bits of old xray film!) that make no sense at first glance.  They should rouse your curiousity.  The Artist's Studio is where the magic happens - somehow out of chaos they achieve real results.  And of course they are full of stories - they tell tales of the dreams & aspirations, the failures and the discarded or even reworked canvases.

Wouldn't it be great if we all viewed each other with openness and willingness to see the wondrous in each other's reality?

What a great metaphor and mindset! End user observation as going into the Artist's Studio. I appreciate that you're curious and open.