On 14th of March 2017, SAP Security Patch Day saw the release of 25 security notes. Additionally, there were 2 updates to previously released security notes.

We would like to inform our customers that the March Patch Day that also comprises a Security Note of Very High priority (Hot News), is immediately followed by security conferences where SAP vulnerabilities are expected to be discussed. Therefore, we wish to remind you to apply all SAP Security Notes on a priority. You may also visit this blog by the SAP HANA Security Team to know more about security patches in SAP HANA.

List of security notes released on the March Patch Day: 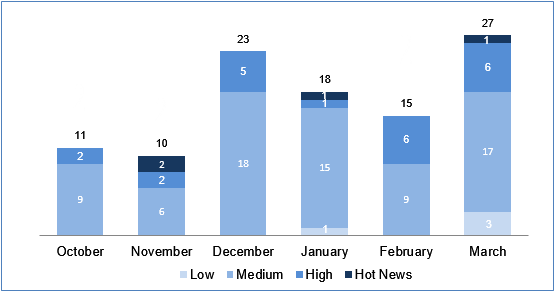 Customers who would like to take a look at all Security Notes that are published or updated after the previous Patch Day see: https://support.sap.com/securitynotes -> All Security Notes -> Filter for notes which have been published after 14th February 2017.

The monthly worklist for a CERT team who is dealing with new and updated notes since previous Patch Day is a little bit larger: