For the past few years we have been focusing on the Named User and Concurrent Session metrics.

Customer with older CPU based licenses can continue to purchase ‘more of the same’, however we do not support new innovations like SAP Lumira Server for BI Platform data discovery tools on that pricing metric.

With that, let’s break down how the Named User and Concurrent Session metrics work.

Please note that this blog is a distillation of the key aspects found in contract documents, user guides, and ‘under the hood’ software behaviour.

This blog is not a document of record and does not override or replace any contracts. Current standard SAP contract language can be found at sap.com/agreements. For on-premise deployments you will want the document called ‘Software Use Rights’

They are typically used for power users, administrators, and executives that require guaranteed access to the BI Platform. A login by a Named User will never be refused by the system. Contrast this with Concurrent Sessions below.

Named user licenses are not to be shared between people.

‘Headless’ applications that are not used by individuals should use a concurrent session license to connect.

When one of these 1,000 users attempts to login, the system first checks to see if there is a free session in the session pool. If there is, the login is successful. If not, the login attempt is denied. This flowchart shows what happens on login for both named users and concurrent sessions:

The concurrent session metric is ideal for casual users (either internal or external to the organization).

The concurrent session metric is not supported for most desktop software, with the exception of SAP BusinessObjects Analysis edition for Office.

So what constitutes a ‘session’? The rule of thumb is that every logon to the BI Platform is a session. So the following actions would consume a session:

The following actions would not consume a session:

IMPORTANT: One user can create multiple sessions! This is why it’s called a concurrent session license and not a concurrent user license.

By default, a Concurrent Session license times out after 20 minutes of inactivity.

Concurrent sessions are only managed by the BI Platform. Software that runs on SAP HANA or SAP NetWeaver can only support the named user metric because these platforms cannot count and release concurrent sessions. 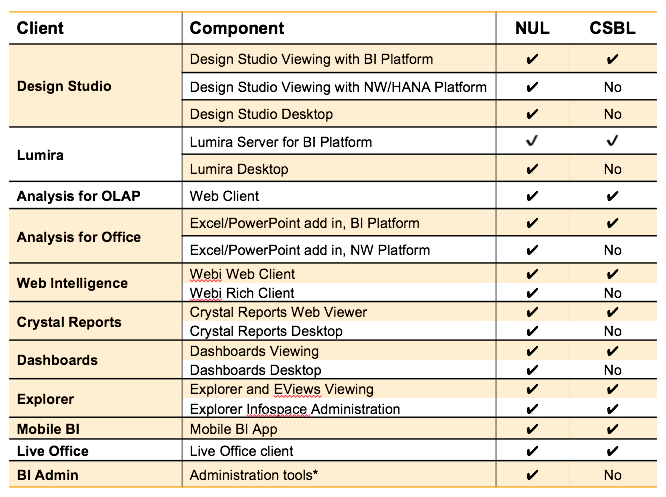 To estimate the number of concurrent sessions you may need, we recommend the following steps:

Software from partners like EV Technologies and GB&Smith can help with this process, and also identify content that is not used and can be retired.

If you don’t have auditing turned on and want a rough ‘rule of thumb’ then we recommend a 20% concurrency rate to be conservative and account for peak usage. This means take the total user audience and divide by 5 to get the estimated number of concurrent sessions.

There are 2 places to track concurrent session consumption in the CMC:

In CMC > Sessions you will see a list of users and the number of sessions they have created:

In CMC > Monitoring > Servers > CentralManagementServer you will see a real time chart of session consumption over time: Make sure to click on the “Number of Sessions Established by Concurrent Users” in the left hand list.

Each user in the BI Platform is identified as being either a named user or concurrent session user. The following screen shots are from BI 4.1.

If you have a 1 named user license for example and attempt to add a second named user, that will be rejected by the system as shown below: 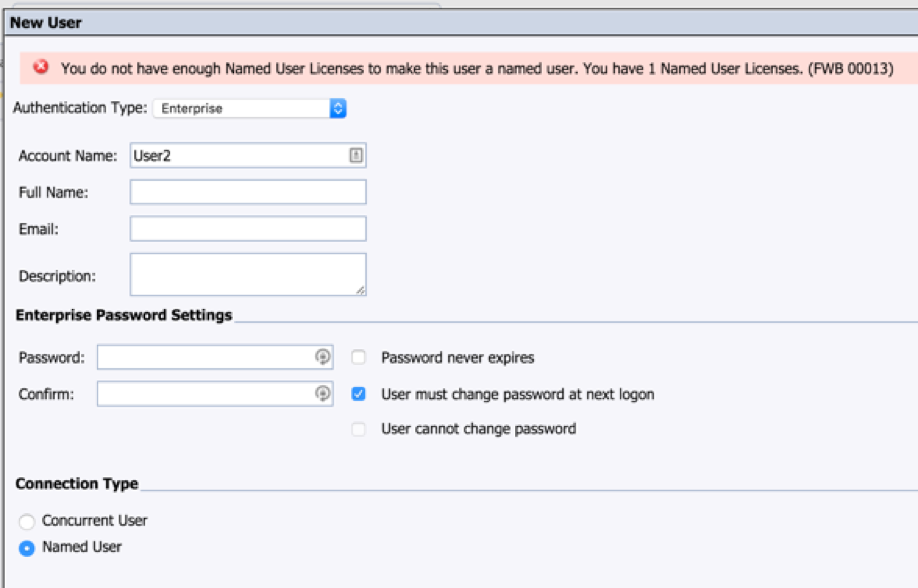 When adding a concurrent session user, you can add as many users as you wish. 26 users or more can share a session pool of 25 sessions: 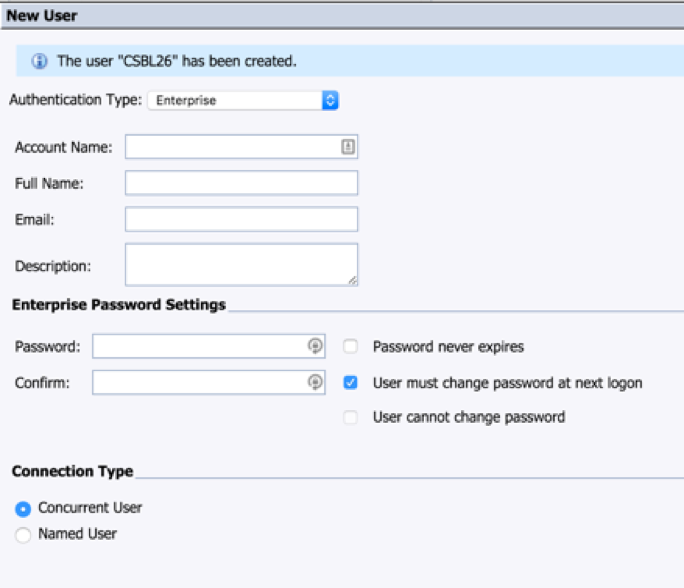 A blog on BI Metrics wouldn’t be complete if we didn’t cover the new Public Document metric.

This metric is for organizations that want to put BI content on the public internet. This is a document based license. Any supported BI Platform document can be counted against the number of licensed public documents.

No security must be put on this document. It must be ‘Google-able’.

If you need security on your documents (ie for customer or partner access) then use the NUL or CSBL metric.

Public documents must reside in a separate deployment from named users or concurrent sessions. We can support this from a single physical installation using the multi-tenncy technique described below.

We support combining Named Users and Concurrent sessions on the same deployment. This allows a single deployment to address the needs of users who need guaranteed access (like power users, administrators and managers) and casual users who may logon once a month.

We encounter many customers who have converted from a CPU metric to a CSBL metric but have forgotten to remove the old CPU keycode. This causes issues during audits so please remember to remove your CPU keycode after transitioning to a CSBL model.

While I look forward to answering any further questions you may have, I can’t comment on customer-specific scenarios on a public blog like this. If you have questions about the details on your specific contract please reach out to your SAP account executive or partner.

This is very helpful, Blair. Thanks for taking the time to put it together.

hi Blair, thanks for sharing.

can you clarify what the licencing implications are (if any) for publication of reports through BI platform (i.e. emailing AFO-excel files or crystal reports). does the recipient need to be a licenced user? if yes, how does  this work in a con-current session licence model because the recipient doesn't log on to the system to view the report, they just consume an attachment.

Publication recipients do not need to be licensed users.

Good luck for your upcoming Keynote in Melbourne!

Is there any clear way from SAP customers can use to programatically monitor the number of CSBL licenses being consumed in a clustered environment?  Namely due to the fact that the session might be duplicated on the clustered server but won’t be counted toward an actual session license.

Yes - use the value in the CMC > Sessions screen.

User can create n number of sessions using same window in same browser and we have checked in CMC it’s still showing session count 1 until we log in to new browser or copy paste open document link to new tab. if we click on any link in open document and if any new report open in new tab of same browser then still sap count this is same session which is really good.

Hi Atul - I'm glad to know its working as designed for you.

Thanks for sharing. Very nice blog. I'm still struggling what clients are the users allowed to use. E.g. we have BI Package (CPU based) engine licenses, BI Viewer and Business Analyst users licenses for standalone and Business Expert for integrated solutions. Can all the licensed named users use e.g. AFO? If not what is the license needed for it?

It does not include Lumira desktop or server.

This is great explanatory:). Thanks a lot for it. It helps very much :).

In your previous blog you mentioned that a Named User license for a single individual can be created on any number of deployments. Does that mean i can use a single generated Named license key on different productions deployments?

No you should request a new named user key for each distinct deployment.

We have a concurrent user license.

Can we use webi rich client, when installed from BI Launchpad preferences and connected in

We see the rich client taking a concurrent session.

Is the need for a named user license only true for rich client installed with the client tools, and

used in 2-tier or offline mode?

We don't distinguish between those installation methods. All use of Web Rich Client requires a named user per our license.

Could you please let me know how to reduce SAP Business Expert Licence. at what different levels I have to touch base.

I have a question please: What do we really mean by Webi RC or Lumira Desktop not supporting CSBL? because even concurrent users can log in to those tools...

It is an indeed great explanation and helps very much.

I have one question though, We are currently having SAP BusinessObjects Business Intelligence Platform Premium Version.(As per the license key informatoin in CMC) with the combination of names user and CSBL users.We are using Design studio which is out maintenance now and SAP has suggested to move to Lumira.With our current License, are we entitled to go with SAP Lumira? If not, which license version we need to upgrade to?