Accessing “the Next Element” — Thoughts from Mobile World Congress 2017

Mobile World Congress (MWC) is the record-breaking annual get-together of over 108,000 attendees in Barcelona, Spain, interested in mobile, 5G, connected cars, devices, augmented reality, virtual reality, cloud computing, IoT, and much, much more. As I do most years, I attended (I believe this might have been my ninth). MWC is the most important event for the mobile-focused industry. This year, the theme was “Mobile: The Next Element.”   The idea of this theme was to “reflect the elemental role of mobile in the lives of billions of people around the world.”  While I was quite busy with over 15 meetings and discussions in our massive (and popular) SAP stand, I was able to walk around occasionally during the 4 days to try to get a better understanding of this year’s major themes. 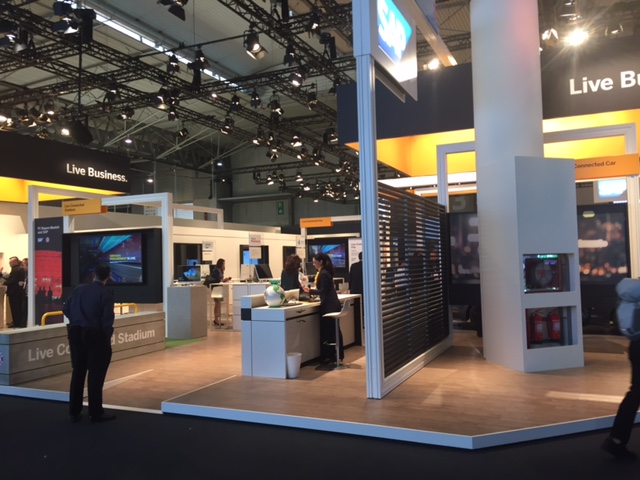 As expected, the noise was extremely strong around 5G and IoT with connected cars playing a key role. Also, the GSM Association was heavily promoting their Innovation City with emphasis on the new RCS/Universal Profile messaging (Part of GSMA’s Network 2020), Mobile Connect, IoT (connected cities) and more. 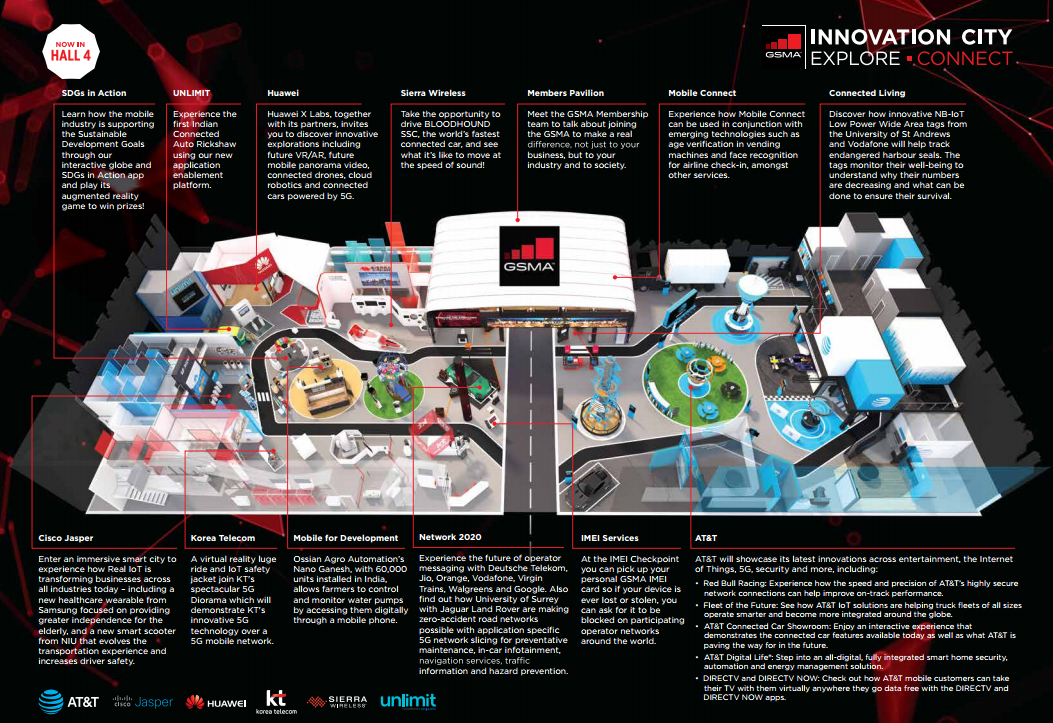 Let’s take a look at a few themes:

Virtually all of the “big companies” and anyone that had anything to do with networks were showcasing “5G” solutions. To date, there is no single, global 5G standard, although there is some early work going among several rival factions. There is a new 5G logo from 3GPP.

Samsung, Qualcomm, Intel, Ericsson, ZTE, Huawei and many, many more announced 5G products and initiatives all week. In fact, unless you were looking for a specific implementation or announcement, they all seem to run together. The reality is that only about 35% of the world is covered by LTE networks today – almost 10 years after LTE was launched. Thankfully, by 2020, we should see that expand to as much as 75% of the world’s subscribers. But 5G is in the works and according to Mats Granryd, director general of the GSMA, 1 billion subscribers would be covered by 2025.

I found exactly two exhibitors that have live or near-live 5G deployments exhibiting at MWC: Verizon Wireless, who have already stated that they will launch 5G services to pilot customers in 2017 within 11 markets in the United States. I sought and found one of the Product Managers at MWC for this initiative and talked with him about this solution. The use-case is fixed broadband for select customers in these 11 markets (one of them being the Washington DC market, where I live). I politely inquired about them testing in my area, as I already use fixed-broadband (Verizon LTE) for my home Internet connections. I don’t expect them to light me up, but it doesn’t hurt to ask. Accordingly, he told me that they already have a few neighborhoods live and will continue throughout the first half of this year. The solution is based on the Verizon 5G Technical Forum in the 28 and 39 GHz bands.

The other exhibitor was SK Telecom of South Korea. Korea has already announced that they will have deployed 5G services for the 2018 Winter Olympics in PyeongChang. The representative I spoke with at the SK Telecom stand at MWC told me that they have successfully trialed some 5G solutions – interestingly using one of the same frequency bands (28 GHz) as Verizon. In fact, last year, SK Telecom, Korea Telecom (KT) formed an alliance with Verizon and Japan’s Docomo to test standards for 5G networks. I am curious to see what devices and solutions will be available to take advantage of 5G, when launched in 2018.

Another big keyword at this year’s Mobile World Congress, the Internet of Things (or IoT) was heavily hyped. While many vendors pushed IoT and 5G, the reality is that many of the live IoT deployments work just fine with 4G (LTE) and even 3G data speeds. Numerous stands, including SAP’s, provided demonstrations of deployed IoT solutions and dreams of things to come like connected cities and connected cars. 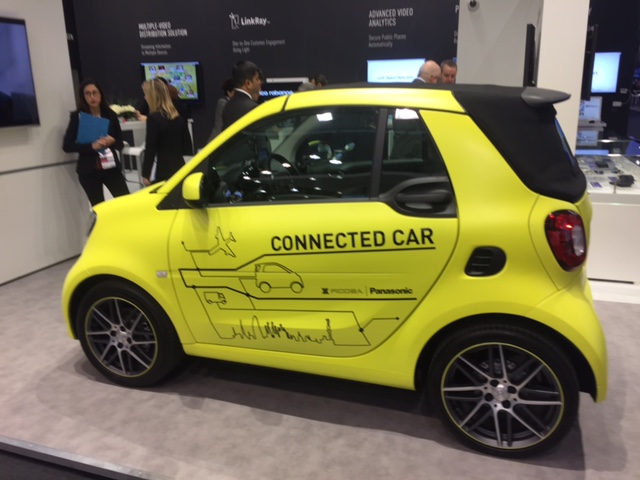 Speaking of connected cars, this year’s Mobile World Congress resembled an auto show in many ways! Dozens of major stands had cars displayed, all highlighting some connectivity, leveraging mobile networks.

SAP provided details with a connected Ford Mustang. Hertz, Nokia, and SAP have combined efforts to provide the connected, rental car experience of the future. This includes car location, mobile device integration for the renter, Wi-Fi through the car, payments, expense and travel reporting with Concur solutions for travel management.

Here is a small sample of the cars on display at this year’s Mobile World Congress. 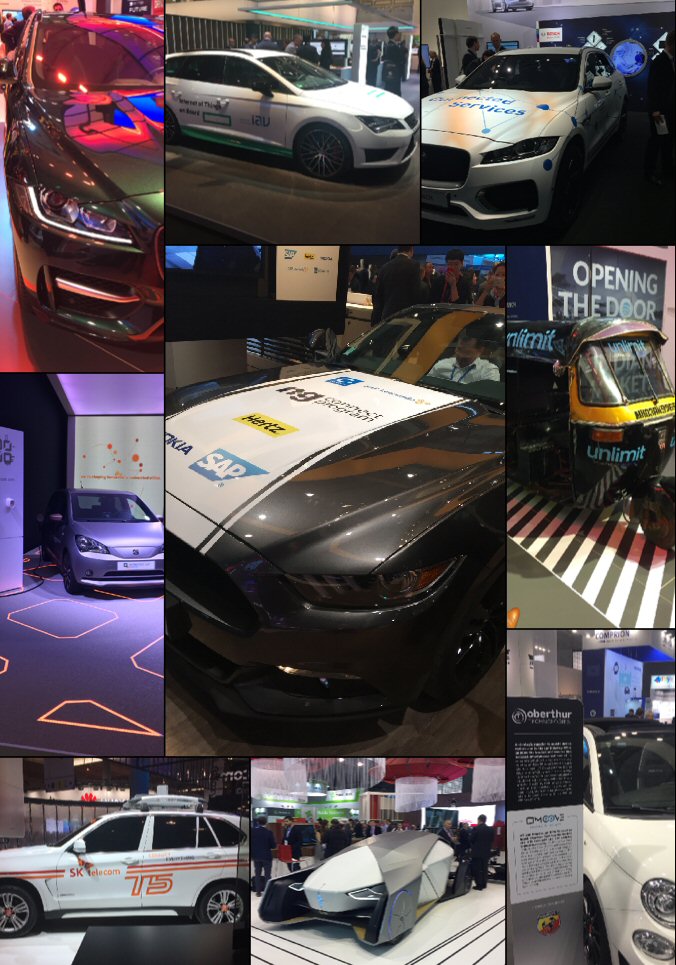 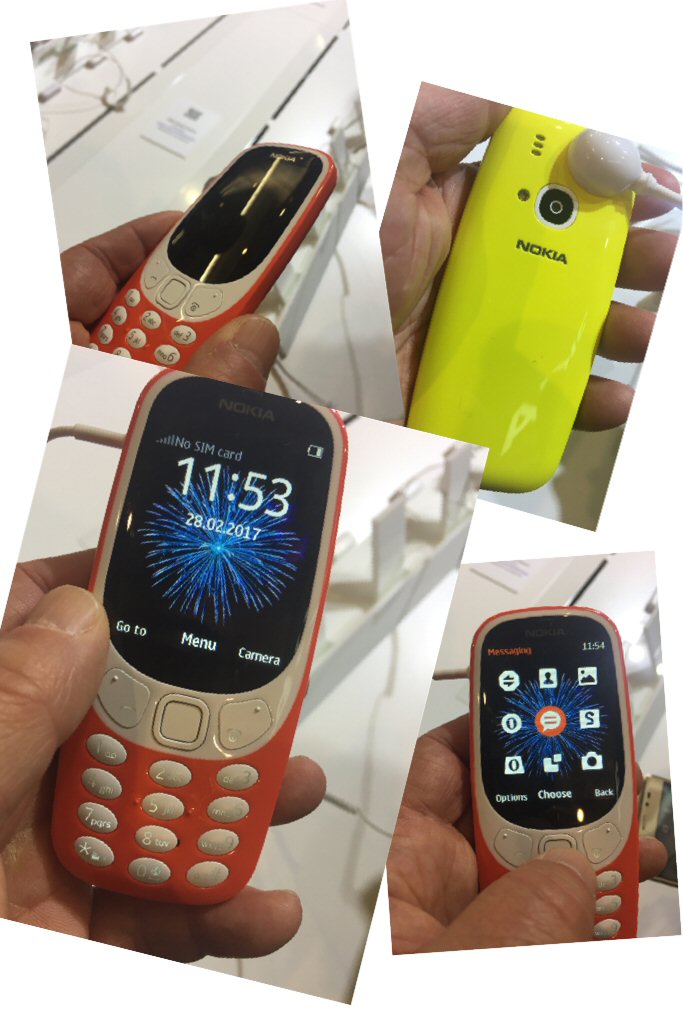 Does that sound familiar? It should – it is the reincarnation of one Nokia’s most popular handsets of yore:

If the traffic around the demo handsets were any indication, it should be a popular option in many developing markets; however, it many other markets (like the United States), the mobile operators have turned off the 2/2.5G networks, so it won’t be available as a back-up device. 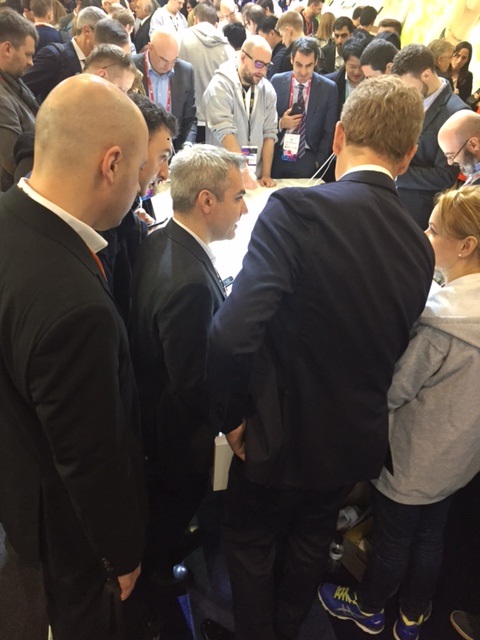 Still, it may have some legs even though there are cheap smartphone options in most markets now. Interestingly immediately after MWC, as I write this, the UK’s Carphone Warehouse says that pre-orders for the Nokia 3310 are astonishing! Perhaps popularity of this little phone will initiate a bit of an SMS surge. Oh, and it does offer the popular Nokia game: “Snake.”

A well-hyped GSMA 2020 initiative was the return or resurgence of Rich Communication Suite or RCS. While RCS has been around since 2007/2008, this latest resurgence called Universal Profile and heavily influenced by Google’s acquisition of Jibe Mobile in 2015, is providing a new type of standards based messaging. Some headlines have heralded this latest RCS — which is now built into the latest version of the standard, default messaging app for Android: Android Messages – the iMessage for Android. While this is ultimate goal, there are still a number of issues with interoperability among mobile operators for RCS messaging; however, those that connect to the Google Jibe Cloud will fare better in terms of interoperability. Another way to look at this, is that there is still some fragmentation in deployment methods.

GSMA and Google have indicated that globally, there are 110 million Monthly Active Users (MAUs) of RCS and in discussions with Google Android Messages personnel, they expect this to grow to over 700 million MAUs by the end of 2017. In India, Reliance Jio reports 25 million weekly active users. To me, 700 million MAUs is getting into some serious territory and is definitely worth monitoring. If this technology can exceed 1 billion MAUs in 2018, then it could have some success. Note that RCS messaging will fall back to SMS/MMS should the other party not support RCS.

RCS messaging (and let’s be clear, this is a pure messaging play – doesn’t seem to be integrated with voice) is not being pushed as a replacement or a mobile operator ploy to try to win back users of WhatsApp and other non-SMS capable chat apps. Instead, the bigger push is for consumer engagement with businesses – in other words: An A2P channel. Messaging services enablers, aggregators, and integrators for enterprises are part of the ecosystem that views RCS-enabled messaging as a new, rich channel, available through Google’s APIs. Certainly the demos of Virgin Trains, Walgreens, as well as AT&T show some innovative engagement options for consumers.

At MWC in 2016, Mobile Connect was just coming out of the gates; however, this year, it was more prominently featured in the GSMA Innovation City. 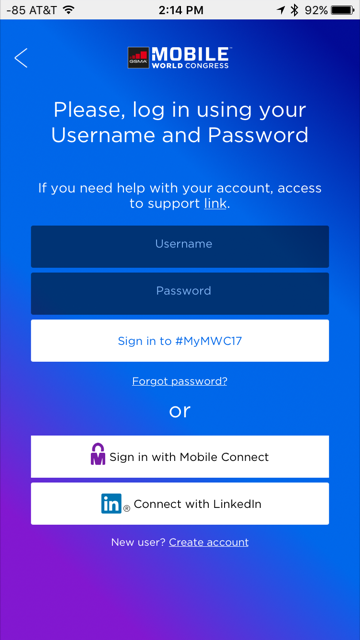 Even the GSMA Mobile World Congress mobile app offered Mobile Connect as a method of logging in.  Mobile Connect is a new GSMA standard for digital authentication. GSMA recently announced that Mobile Connect is now available to over 2 billion consumers, globally. The Innovation City provided information on a pilot of Mobile Connect now starting with the 4 major US operators as well as connected vending machine demo. I think this is another technology initiative that should be closely watched as it could be one of the answers to leveraging mobile for authentication of users or validation of user attributes – an important capability in today’s digital ecosystem.

The Next Element is not just one technology; it’s not 5G, or IoT, new messaging, devices or connected cars. In many cases, walking around the show floor, I wondered, “what’s the connection to mobile?” or “what’s the point?” when looking at displays and gimmicks to get people to visit stands. Mobile World Congress has evolved into a trade show that not only highlights achievements and visions around core mobile technology, but also technology that will ultimately leverage – sometimes from a distance – mobile in some way or fashion – but ultimately providing some solution for consumers. So, in that vein, Mobile World Congress 2017 certainly lived up to its billing. I think, most of the 108,000 attendees found something to make the congress worth their while.