More details about Access Control can be found in Bernd’s blog https://blogs.sap.com/2015/07/02/blog-series-access-control-management-basics-of-access-control-and-business-roles/

Question: If I have conflicting privileges for multiple roles assigned to the same business user, how does the system determine what privileges to assign?

Question: How do Roles and Page Layouts work in tandem, especially if there are conflicting privileges from multiple assigned roles

The explanation below is geared towards answering these questions:

Based on the access rights assigned, the system first determines if the logged in user get access to the content. Eg: Role 1 grants Read access while Role 2 grants Edit access to the same object. As explained above, the Edit access takes preference hence the user can edit the object. Now, going one level deeper, if only a part of the object can be edited, then you can control it via Page Layouts

Taking an example, if there are 2 user groups that have edit rights to the objects, BUT should be allowed to edit only a subset of fields or their combinations, then, you can have 2 roles –both allowing Edit Access, but 2 different Page Layouts with defined combinations of read only fields. Which PL should get assigned to which Role can also be controlled by another (list) field which is the Instance Type for a BO.

User Tara is assigned to the role VintestOppCOntrolFacet1 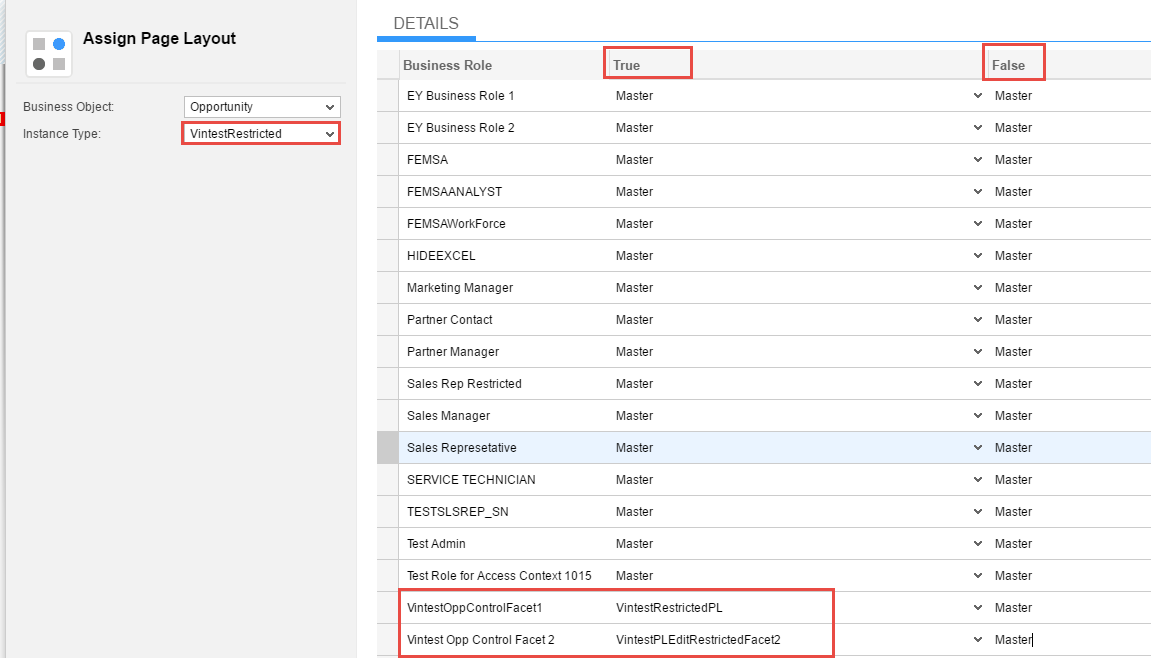 A) If user Tara logs in, and an Opportunity has the VintestRestricted value set to True, then the PL VintestRestrictedPL is determined based on her singular access to the role VintestOppCOntrolFacet1. Hence, F1 should be read only for her, F2 editable and F3 Editable as well

The reason for the above is, that Kamala was assigned 2 roles that conflict each other

F1: Role1 had F1 as Read Only, Role 2 had it as Editable: Rule: If at least one of the roles disallow the Edit rights, it prevails. Hence F1 is read only

F2: Role1 had F2 as Editable, Role 2 had it as Read Only: Rule: If at least one of the roles disallow the Edit rights, it prevails. Hence F2 is read only

F3: Role1 had F3 as Visible, Role 2 had it as hidden: Rule: If at least one of the roles make the field Invisible, it prevails. Hence F3 is invisible