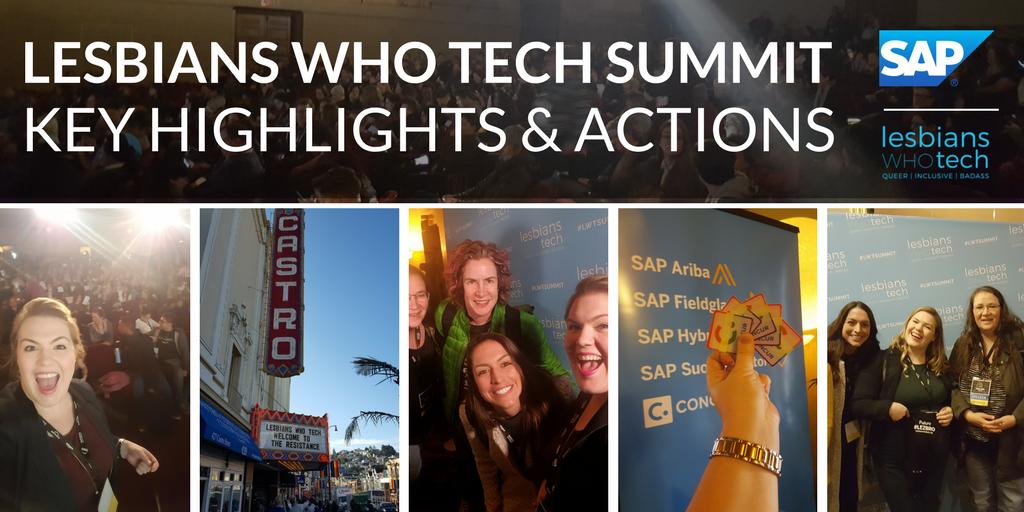 Last week was the most inspiring week I’ve had in 2017.  What made it so incredible?  Attending the 2017 Lesbian Who Tech Summit with 15 other from SAP.  The Lesbian Who Tech organization tagline is, “Queer, Inclusive, Badass” is this year’s conference was that and more!

This was my second year attending the #LWTSummit representing SAP and this year was the best yet!  Before the conference, LWT Founder Leanne Pittsford shared:

Because the world changed, our strategy for this year’s Lesbians Who Tech + Allies 2017 San Francisco Summit changed. After the election we regrouped and approached the Summit with a fresh point of view to take the Summit beyond technology. We reached out to leaders who are rising up and using tech to lead the fight on issues of reproductive rights, LGBTQ rights, systemic racism and sexism, and more issues at the intersection of power and freedom.

And I am SO thankful they took this approach.  Living in the Silicon Valley as a queer mom in tech, I am very, very privileged: I feel safe, I am completely out in all aspects of my life (including very publicly at work), SAP is an industry leading company when it comes to diversity & inclusion, I’m on my son’s birth certificate as mom (even though my wife gave birth), and the list goes on and on.  However since Donald Trump was elected president and especially the last 6 weeks he’s been in office, I’ve felt this total and complete sense of being scared, angry and overwhelmed all at once.  The Lesbians Who Tech Summit provided a venue not only to bring together 2500+ queer folks and allies in tech to figure out how we can support each other, resist together, and continue to use tech to drive change.

Being woke is a relatively newish concept in mainstream media but has been a concept and action around minority social injustices for some time.  Just in case you not familiar with the concept of being “woke” the idea at its very simplest is that you aware of the privileges you have and what that means in a social and societal context.

Being woke was a major theme throughout the LWTSummit and started with a keynote on the Art of Staying Woke from Danielle Moodie-Mills, Creator-in-Chief of the site WokeAnd.com and co-host of #Politini radio show.  Daniel walked us through how everyone can achieve wokeness.  It’s simple: be aware your advantages in life that have nothing to do with you (privilege).  Understand the impact that those pridledges have on you and society.  Use your privileged to do good! 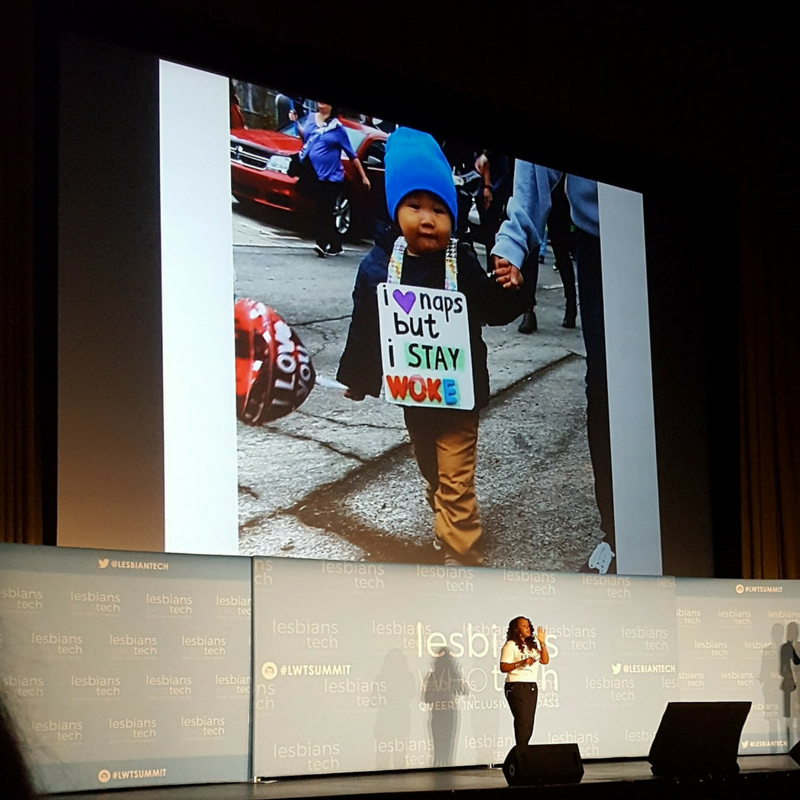 Key Takeaway: Everyone can use their privilege to make a positive difference

Meg Smith, former US CTO, Googler and Bay Area Native, did and in-depth interview and one of the most fascinating discussion was when she shared President Obama’s reaction to coming to the Silicon Valley.  Meg said in summarizing what one of her top tech employees remarked upon his trip to the Silicon Valley and said, “I was going to throw up.  They have no idea how blind they are to the lack of diversity.  They think it’s a meritocracy and it’s outrageous and they can’t see it”

Smith pointed out that Obama’s team was the most diverse she’d ever worked on including race, gender and age (including her tech team).   In a follow up question Carrie asked why so many in the valley aren’t doing the minimum and Smith responded with, “Because they’re blind, entitled”

So I implore you to read Raising the Floor: Sharing What Works in Workplace Diversity, Equity, and Inclusion 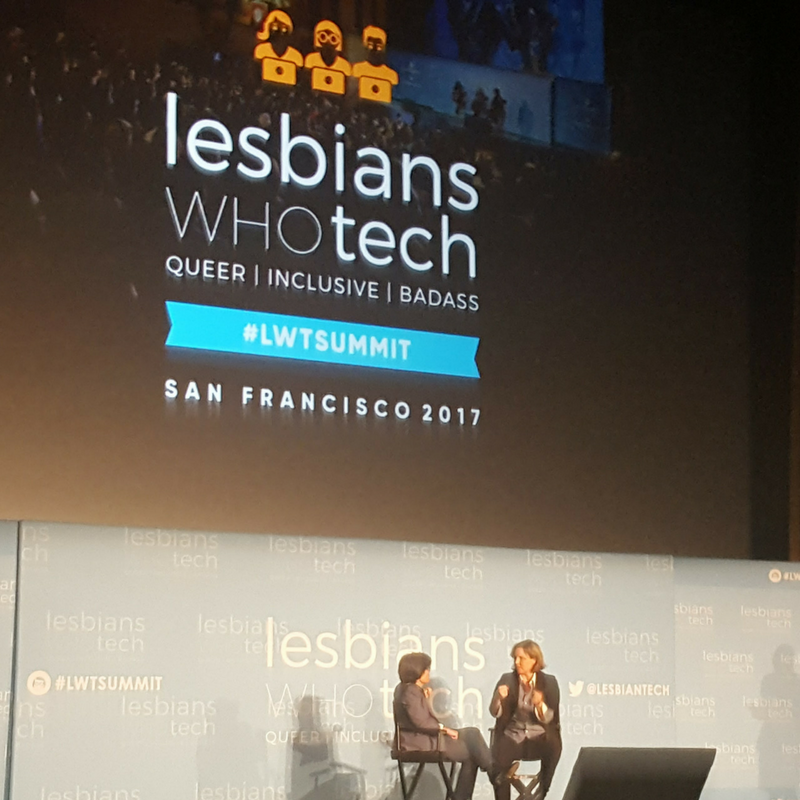 Key Takeaway: Although SAP is a clear industry leader when it comes to diversity & inclusion, there is still so much more that can be done.  The Tech industry overall is failing when it comes to being intentionally inclusive. I challenge you to be aware of your teams, meetings, hiring, promotions, and daily work life.  If you show up to a meeting and everyone looks like you, is the same gender as you and same age as you THERE IS A PROBLEM.  The first step is recognizing you are at a disadvantage when you are operating in such a homogenous environment and the second is to take actions to fix it!

Intentional Inclusion is good for Business, yet we still have a huge diversity and inclusion problem in tech

Let’s start with some quotes about diversity and inclusion:

“Research has shown that diverse groups are more effective at problem solving than homogeneous groups, and policies that promote diversity and inclusion will enhance our ability to draw from the broadest possible pool of talent, solve our toughest challenges, maximize employee engagement and innovation, and lead by example by setting a high standard for providing access to opportunity to all segments of our society.”   President Obama

“Embracing our employees’ unique perspectives and fostering an inclusive environment regardless of culture, race, ethnicity, age, gender, sexual orientation or mental and physical ability provides SAP with a rich source of innovation and allows us to better understand the needs of our customers,”  Anka Wittenberg, chief diversity and inclusion officer at SAP.

We know that diversity is good for business yet as an industry we struggle to make strides to become more diverse.

Leanne Pittsford, founder of Lesbian Who Tech, shared a new perspective on our tech industry diversity problem: 1) Biased networks or biased. Hiring is one of the riskiest parts of doing business and we hire form the networks we know.  We as humans are biased, therefore our networks are biased, which creates a huge hiring challenge.  2) 60% of technical talent has nontraditional skills, but companies aren’t hiring from boot camps (again – trying to minimize risk).

So how do we solve this problem?  Scale direct referrals outside of our networks (knowing our network are biased).  How do we do that?  With the Lesbians Who Tech new project, Include.io.  Include.io is a new platform that allows for individuals to virtual mentor and validate people’s skills (like check and validate code) and allows businesses to seek validated talent based on self-identifying characteristics.  This enables engineering relationships to compensate for our bias network (and therefore biased personal referrals) which are the safest way to hire. 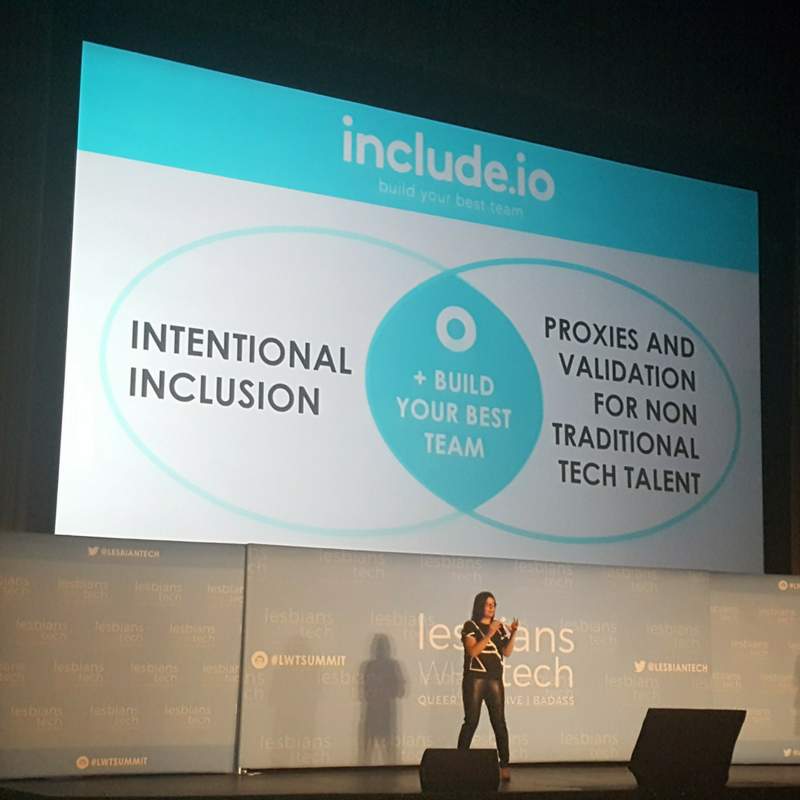 SAP is taking on this challenge too!  Our Success Factors technology is continuing to drive business beyond bias and tackle bias from a technology perspective.

Key Takeaway: All our networks are biased (because we’re humans).  Find ways to fight these biases like signing up for Indluce.io or using tech like SAP Success Factors that fight your biases.

Seeing Yourself Represented in Tech is Powerful

I’ll end with saying that seeing yourself not only represented but celebrated in tech in one of the most validating, energizing and empowering experiences.  Human connections matter!  The Lesbians Who Tech Summit is the most inclusive tech event out there and is a literal life changer.  I encourage you to get involved and become part of the change for good.  Join your companies Employee Resource Groups (ERGs).  If you company doesn’t have one – start one!  If you have budget fund sponsorship and attendance of events like the Lesbians Who Tech Summit!

My colleagues have done an amazing job recapping SAP’s involvement in the Lesbians Who Tech Summit 2017.  See their posts here:

“The future is yours, kids.” 4 SAP Technology Spotlights at Lesbians Who Tech Summit>>

Really good wrap! Thanks for highlighting Megan Smith, Danielle Moody-Mills, and Leanne Pittsford and kicking it up a notch at the Summit!