My Roots, Your Roots

My Roots, Your Roots

A Homeland is defined as a native place in which ethnic group holds history and cultural roots. Remember this sentence, it will get deeper meaning as you read through these data.

Refugee convection has established definition of a refugee as someone who has well-funded fear of being persecuted for reasons of race, religion, membership of a social group or political opinion, is outside of his/her nationality and is unable, or owning to such fear, is unwilling to avail himself/herself of the protection of that country. Striping down the definition to core basics, refugee no longer holds trust to own nation and has fled the nation to escape the fear and seek protection.

As a part of my studies at Victoria University we were confronted with a final task – an Assignment to source, analyse, and tell a story about refugee issues in Australia. This has pushed us to access numerous of google-able resources, the trusted sources such as refugeecouncil.org.au, border.gov.au, dss.gov.au, aifs.gov.au. It was when I found asyluminsight.com and their graph of number of asylum seekers arrival by boat that got me to ask a question: “Nobody wants to come to Australia anymore? Or did everyone came in years 2011-2014 at the peak ?”(External Graph, Source http://www.asyluminsight.com/statistics/ )

A simple graph above, tells the story of controversial Operation Sovereign Borders(OSB).

After the Government change in 2013, on 18 September 2013 the Operation Sovereign Borders has begun. The operation originally consisted of stopping the incoming boats turn them back to the country of departure or alternatively tow the boat to its waters. However, at the beginning of this operation numerous of people were detained and the policy took full effect at the end of 2014. If the refugees boat was not operational the refugees would be placed into “orange life boat” and towed as per above. When I tried to explore this topic in details I could not find any clear dataset. The operation has been run under certain curtain of secrecy, officially in order not to provide any information that could help the smugglers. The strive for data about OSB has brought me to use official media releases and operational from Border Protection newsrooms available to the public.

The data collection started there, these graphs are constructed from 79 operational updates and 62 news releases. These 2 sources have proven as a good quality data for this topic, however as the time progressed less and less information has been given available and for the sake of consistency three major data sets were collected:

These data – properly cleaned, however small provide range of information that can be visualised to tell the story about the development of this operation and the impact on refugee’s life.  Below are visualizations made in SAP Lumira, using datasets compiled on Excel spread sheet.

Visualization No. 1 – OSB in numbers of Detainees 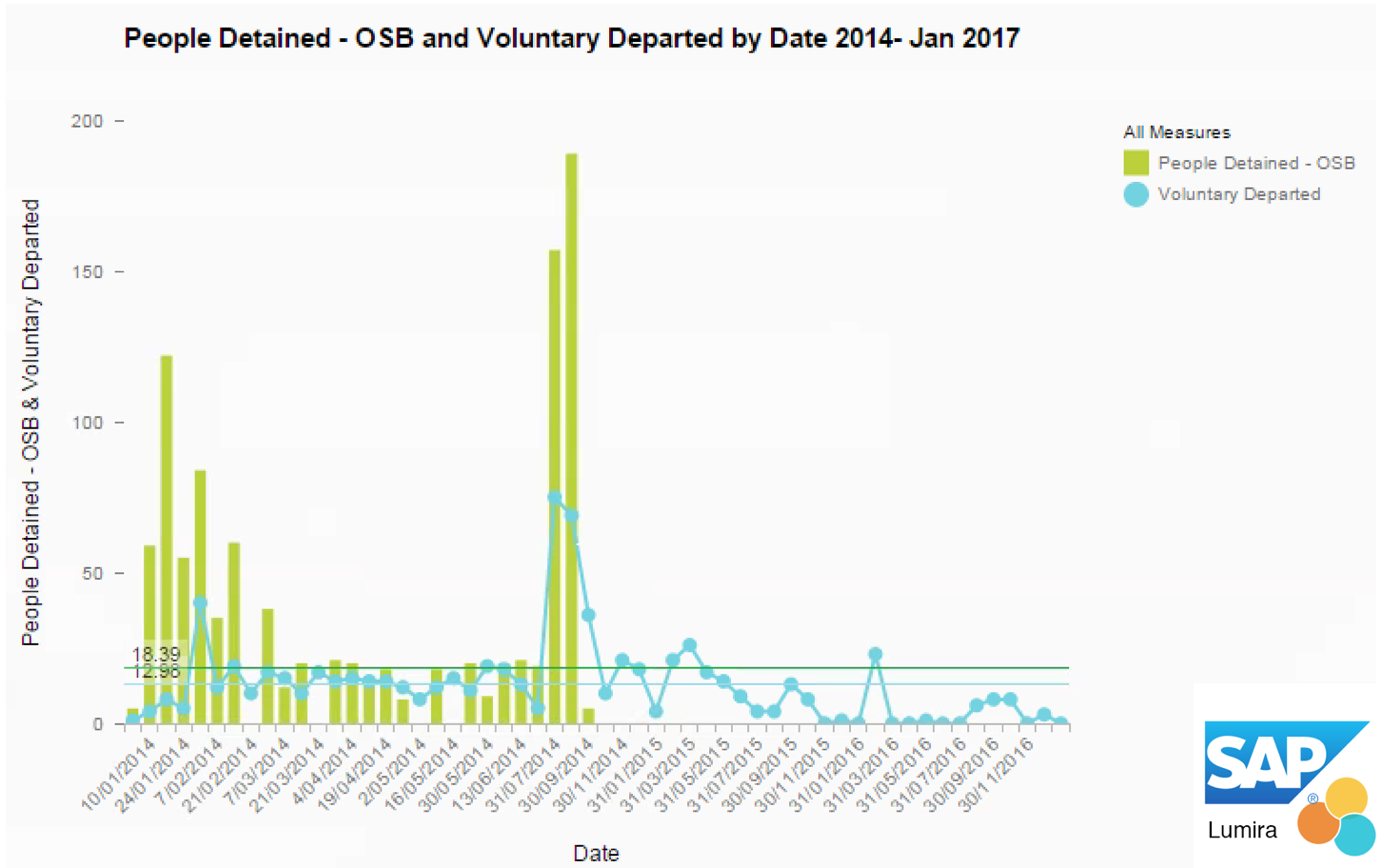 Shows OSB from year 2014 to Jan 2017. Numerous observations can be made from this point, the most significant are: 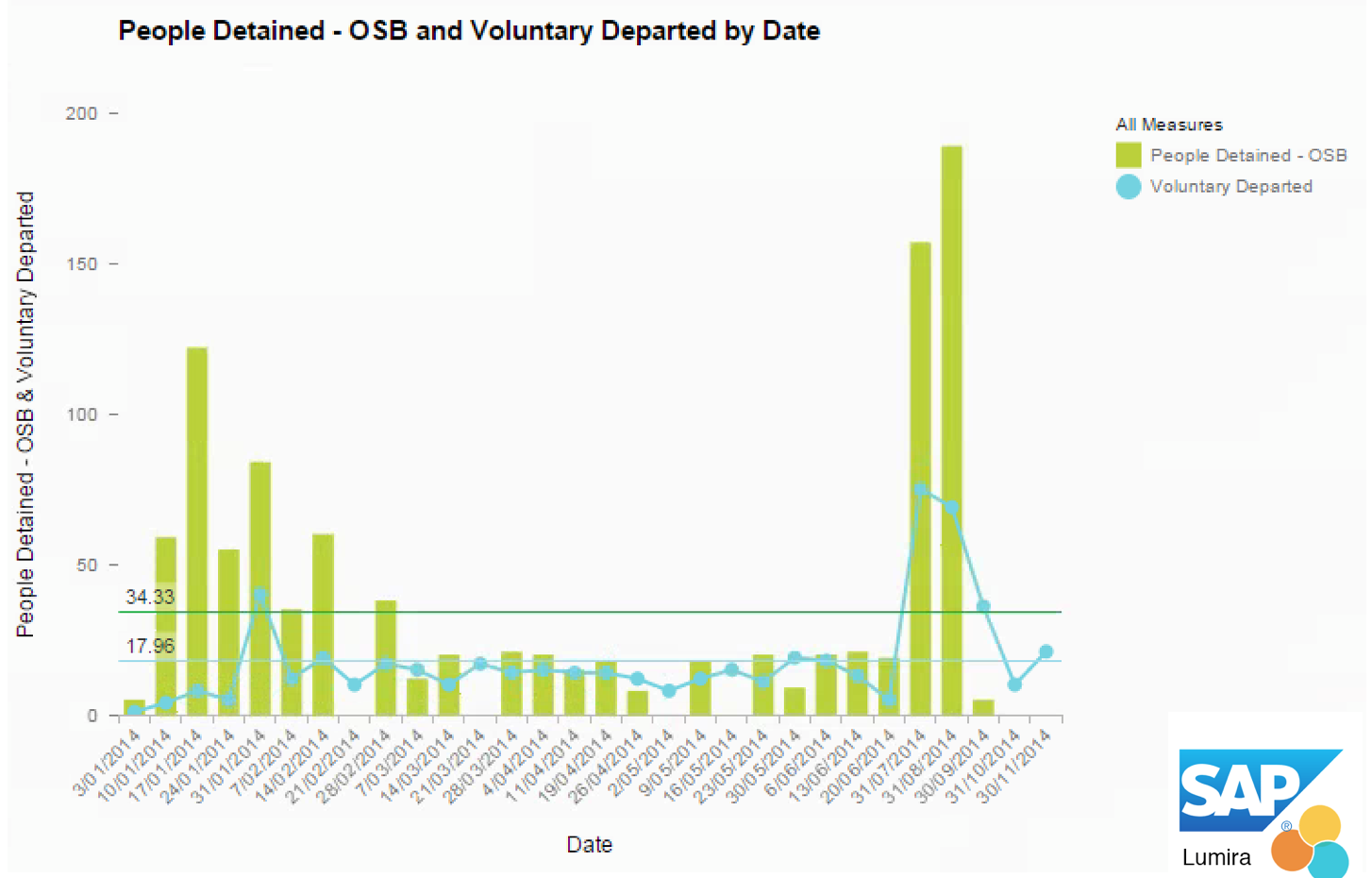 This graph provides us with the inside of:

Documents provide support for the trend of electing to be returned to country of origin instead of OPC placement.

Visualization No. 3 – Nationalities of Refugees Voluntary Returning to country of Origin. This graph shows the following:

This chart in conjunction with previous chart can indicate that if majority of Australia dreams were abandoned at first interception or within months of ODC accommodation the above countries are likely to seek new opportunities than to be qualified as Refugee.

Visualization No. 4&5 – Refugees in Long term ODC accommodation by length of stay and nationalities. 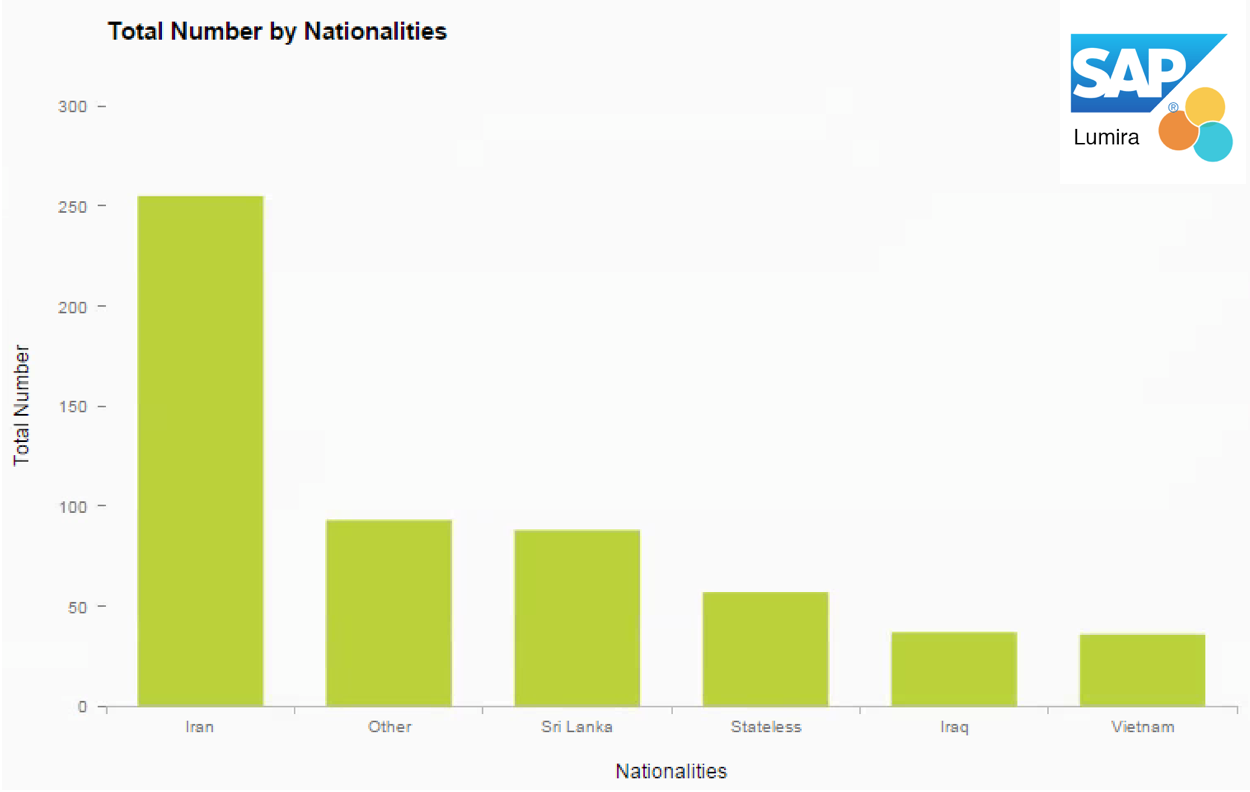 These graphs were constructed based on the newest Immi release of Dec 2016 report from ODC. We can see that Iran is again a Dominant Nationality of long term ODC Detention with majority of the Detainees waiting for visa decision for more than a year. Large portion, 30% of the detained refugees are in the ODC for over a 2 years. Meaning that these refugees are placed in ODC at least from Dec 2014. Just pause here for a little and think how much has changed in your life since the 2014. How many places has you visited? Who have you met? All the new experiences in your life over that 2 years.

What motivates these refugees to be persistent and not to leave the ODC voluntarily as their follow detainees did? Australian Institute of Family studies(aifs) has conducted research among newly settled refugees in Australia and gathered data from about 2,000 in two stages Before and After the settlement with about 90% of the responders in the program for 3 to 6 months. For the purpose of this blog, we have looked at the data presented in the final study” Building new life in Australia” as well as the data user guide that explain how this study has been conducted and the treatment of the data from the collection, cleaning to the final presentation.   The study has been release in Jan 2016 and the data collection has been conducted on Refugees settled in late 2013.

Visualization No. 6 – Motivation to persist and resettle 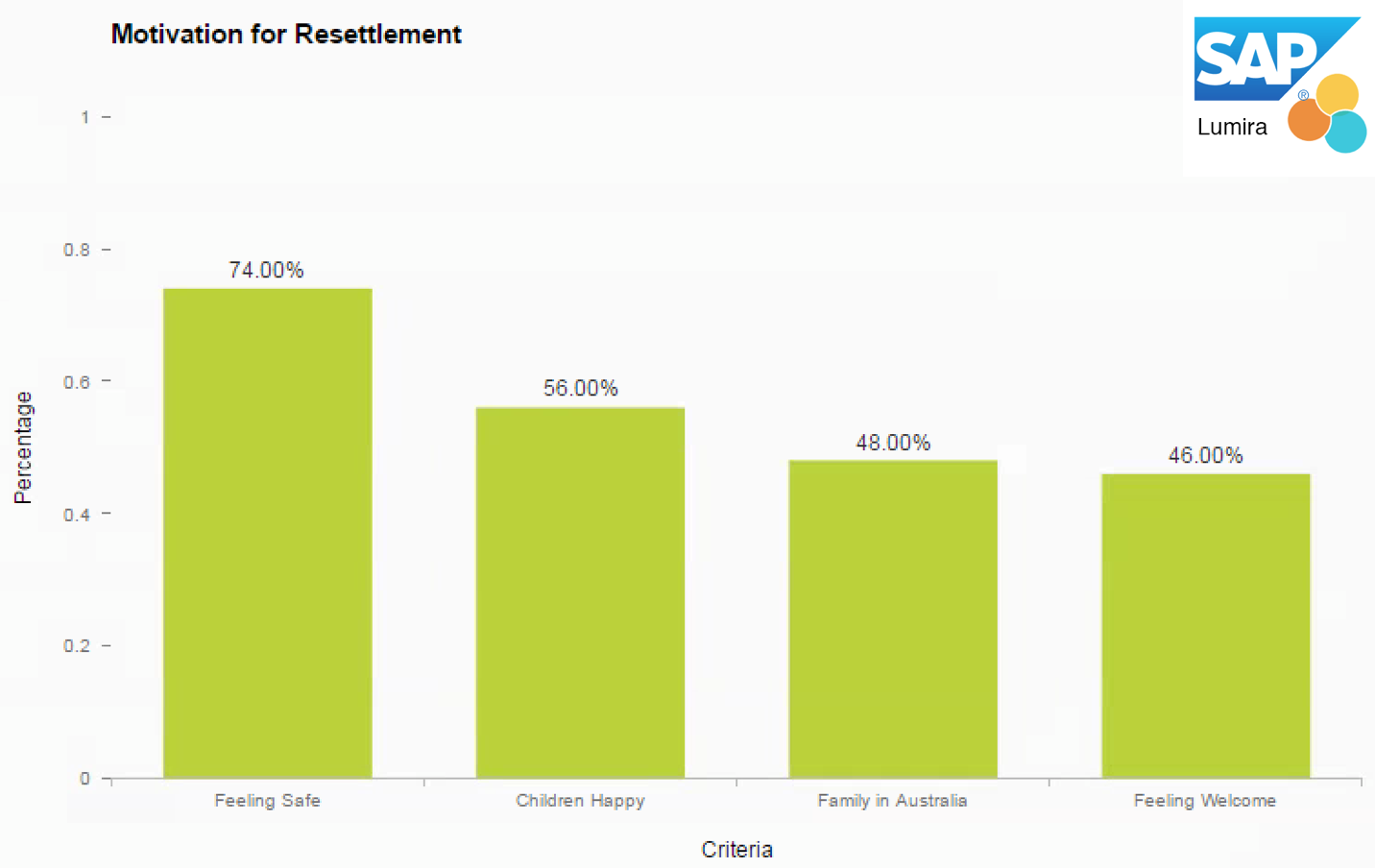 For the people that have lost the trust of their own country is the feeling of being once again safe the most important factor with happiness of the kids closely following.

48% have responded that it is the Family that is already in Australia that motivated them.

From this numbers we can see that the refugees, despite the obvious reason – safety are looking for new life of their kids and reunion with their family. Note this graph does not add up to 100% in total as the responders could choose more than one option.

Visualization No. 7 – Helping Agent as Identified by Refugees 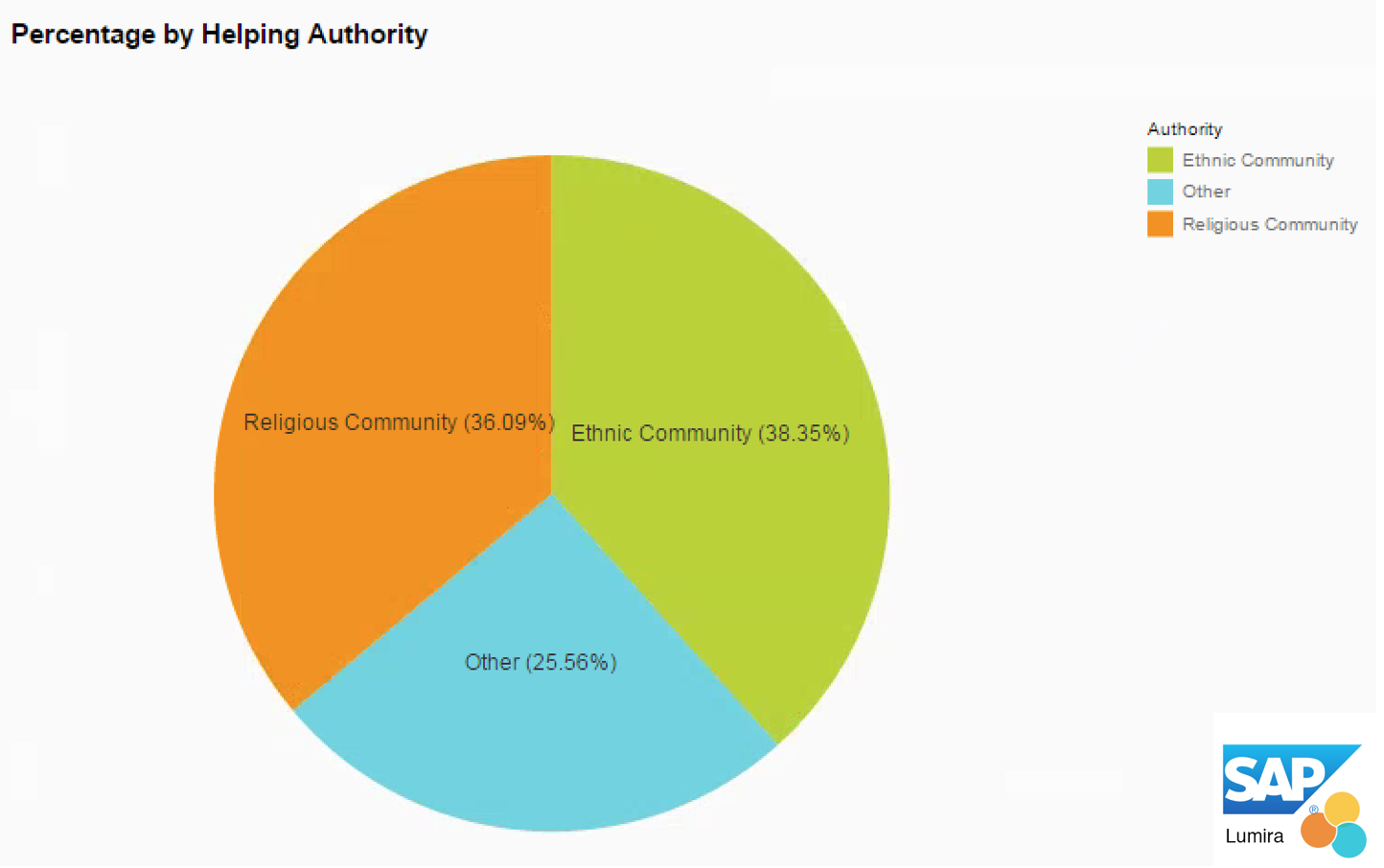 This pie chart is showing the opinion of refugees on who has helped the most during their resettlement. We can see strong sense of their own community belonging with 74.44% stating that either their own Ethnic or Religious group has helped them the most. This strong connection to their own community correlates with 2nd and 3rd response at the motivation question. Based on this data we can assume that one’s sense for belonging to particular culture and the religious roots are strong even after they deemed their country unsafe safe for their future and future of their kids.

But how do the refugees cope with settling in country so different to their own? To answer this question, we will look at the language aspect. 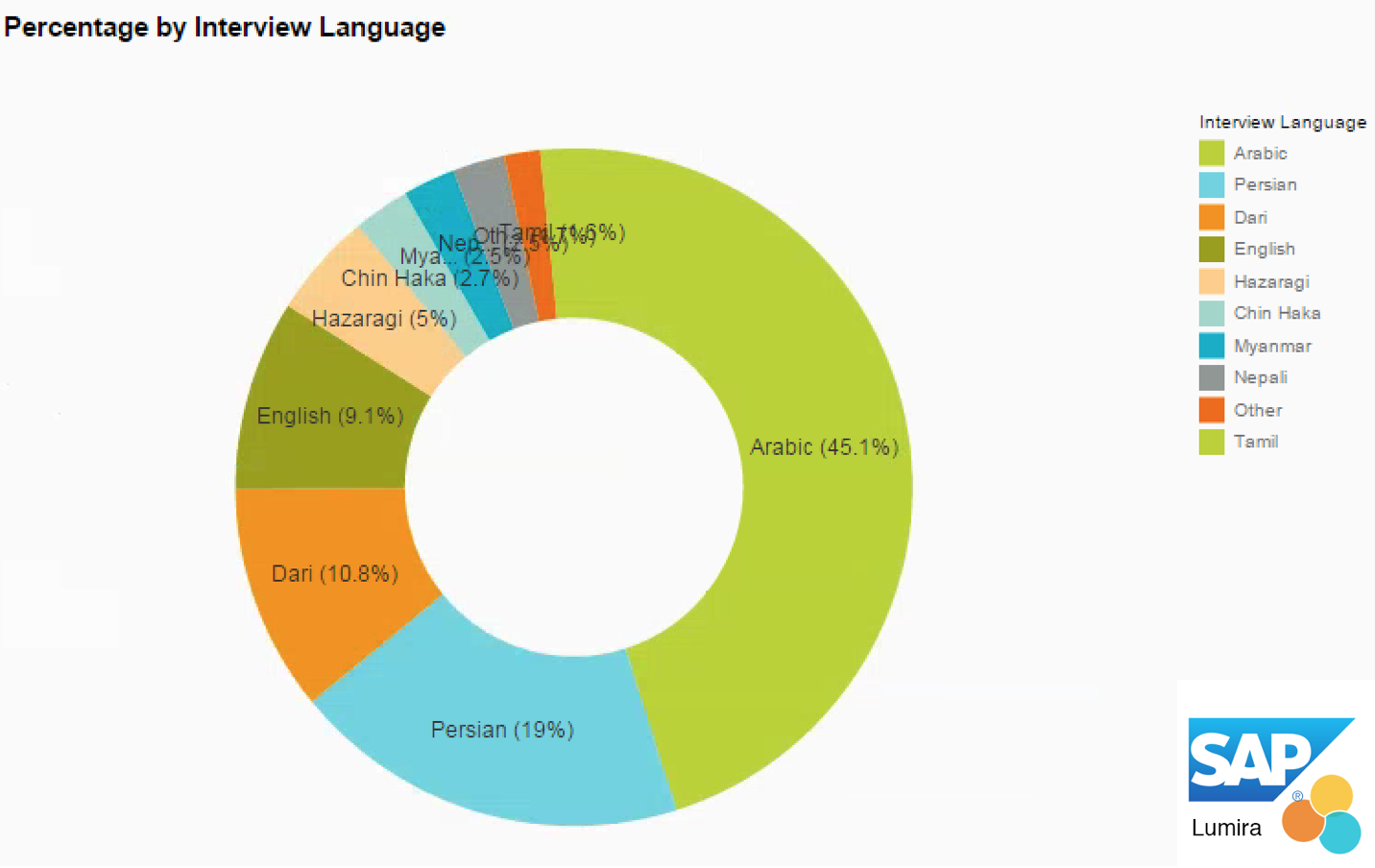 Visualization No. 8 is constructed from AIFS Data Guideline and represents the percentage of each language that the survey “Building new life in Australia” has been conducted. This is part of the wave 1 survey that has been conducted at the arrival to their settlement location. We can observe that top 3 languages are middle Eastern Languages such as Arabic, Persian, Dari (Variety of Persian, Afghan origin).

9.10% of the responders were confident enough to take this survey in English. This visualization shows the language background of the responders of the survey with this in mind we can observe progress of these people in their English language journey. 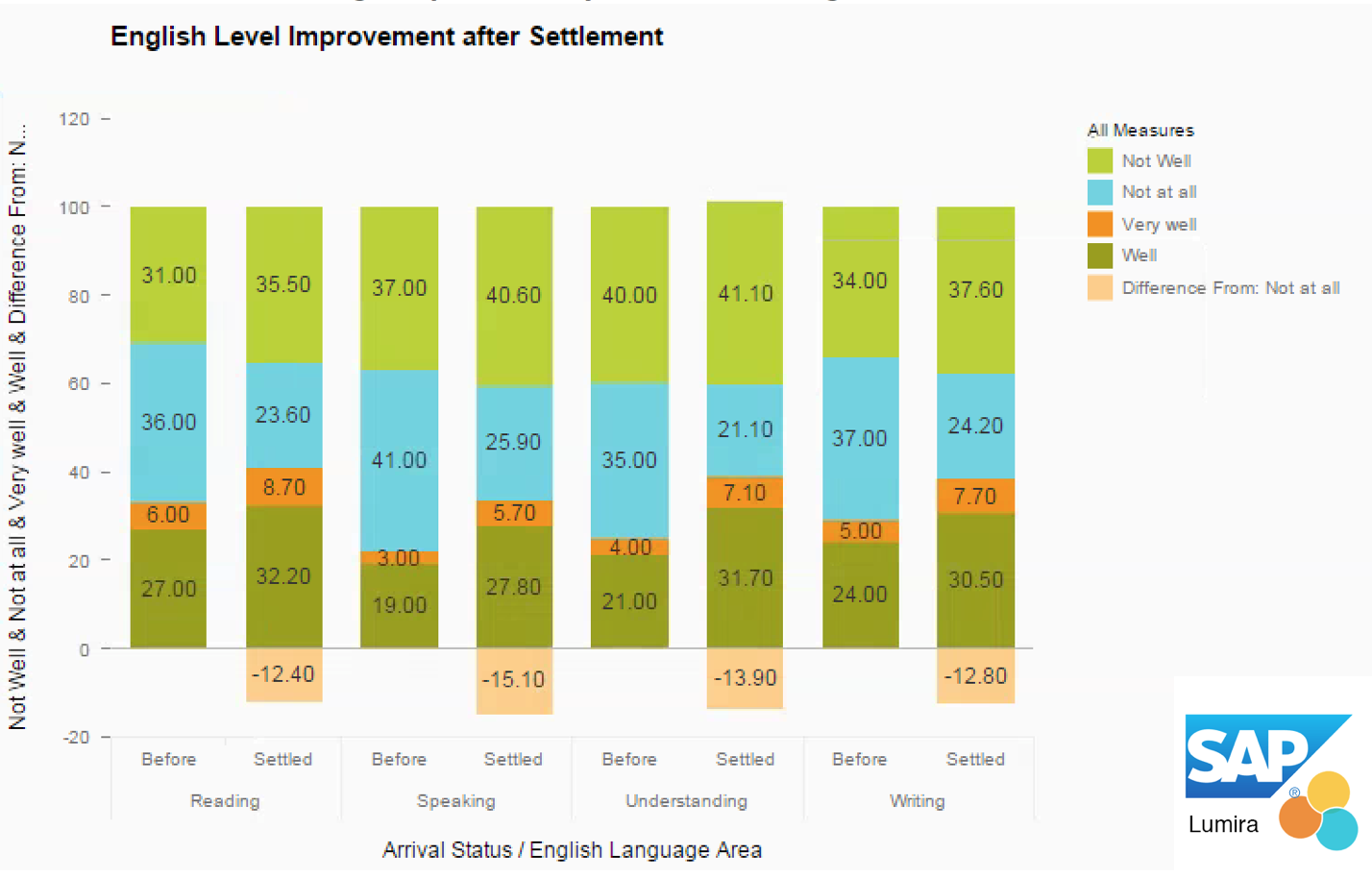 This stacked bar chart shows English language skills of the above refugees by Categories and comparison of the 4 levels of English before and after their settlement, as per the study guideline 90% of this responders were at the settlement for period of 3 to 6 months.

We can observe significant reduction of the Not at all category and almost equal improvement of the Well category. The lowest progress was achieved in the Reading category “Not at all” measure has seen only 12.40% decrease. That can be explained to very differed structure of Middle Eastern writing in comparison to the English texts. It is not just the grammatical structure, but whole new different alphabet and pattern of reading itself as English is red from left to right, while Arabic is the opposite way.

We need to bear in mind that the after settlement survey has been conducted at the same time as the Visualization No.7 asking them to identify helping Agents. Even though the refugees have been given the most help from their own Communities they are minding the fact that Australia is their new home and even after 3 to 6 months of resettlement there is an advancement in their English language level.

To conclude, some refugees are choosing to immigrate to Australia illegally by boat. In the past this choice has proven to be extremely dangerous with radical toll on human lives.

Australian government, in order to stop this illegal practice and save the human lives has launched Operation Sovereign Borders. After collecting the available data, this operation is a success with rapid decrease in the attempts in the first year and no reported deaths of refugees at sea ever since. The repelling effect of this operation has seen mostly Iranian refugees to voluntarily give up on illegal way to immigrate to Australia. As of Dec 2016, there are more than 300 refugees in long term detention still awaiting decision on their case. The new stage of Operation Sovereign Borders sees no detentions to be made and the boats are safely returned to the country of departure.

Australian Institute of Family Studies has conducted survey on refugees resettled in Australia that have gave us insight on one’s motivation to undertake this dangerous journey with children and family being one of the major motivators. Despite the fact that most of the refugees have lost the trust in their own country they are keeping sense of their own and unique culture as well as the religious aspect. One of the key challenges for Refugees in Australia is the language around them. We have found out that almost 90% of refugees were not confident enough to take survey in English, however they have shown significant improvement in their English skills after 3 to 6 months of resettlement. Overall, the data sets examined show strong persistence in regards to their own culture as well as the will to embrace major change in their lives and adopt the English language to became part of Australian society.