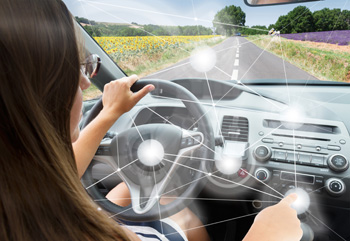 Smart cars — whether self-driving, autonomous or connected — represent the biggest opportunity for manufacturers and their employees since Henry Ford’s first Model T rolled off the assembly line over 100 years ago. This was the gist of a conversation between three automotive experts during a recent episode of SAP’s Future of Cars with Game-Changers radio broadcast. Hosted by Bonnie D. Graham, the show focused on the transformations car manufacturers and their customers can look forward to as connected cars hit the road in growing numbers.

Technology is the job creator

The car industry has to wake up to a future of manufacturing, which Larry Stolle, Sr. Director, Global Automotive Marketing at SAP, said “isn’t about screwing a nut on a bolt anymore…the opportunity is so huge to retrain, to reinvest, and to develop skills necessary to create innovation today…in technology, robot design, plant design, product designs – those are where the real capital of the future is.”

Companies also have to equip future employees with the technology skills for tomorrow’s auto factories. According to Kim Knickle, Research Vice President at IDC, effective workforce education starts in elementary school with a diverse population of children by gender and ethnicity. “You have to find the kids who really will be excited to be in manufacturing…and make sure they know how they get to work with all sorts of new kinds of tools and robotics,” she said.

Of course, manufacturers need to understand machine learning in order to take advantage of it. Mike Lackey, Global Vice President of Solution Management LoB Manufacturing at SAP, said software vendors have an equally important role in this transformation.

“It’s our job at SAP to make manufacturing fun again. When employees come into the shop floor they [should] have the same experience they have when they go to Facebook…It’s a world of mobility and automation. But technology is not the job destroyer. Technology is a job enabler.”

The car factories of the future will deliver mass customization at the same cost and speed as Henry Ford’s last century mass production rates. “Our designers are going to have more information about their customers, about how their car performs, and the total life cycle of that car than they’ve ever had before to make better designs,” said Lackey. ”Every car is customized for that individual customer, and you’re producing a car every 88 seconds, or you’re producing an engine that’s going to feed into that car every 30 seconds.”

But design is much more than how a car looks. Knickle said manufacturers need to understand how innovations make the technology components work together. She predicted the rise of plant floor workers using automated assistance technology, robotics, 3D printing, artificial intelligence, and augmented and virtual reality tools.

“Digital twins are absolutely one of the most important things for supporting the experience that customers want from the design of the car to the service, but we’re not able to fully understand the possibilities for machines with cognitive computing,” she said.

Graham closed the discussion with a call to action for the industry. “The physical world is going to collide with the digital world which will collide with the business world, and that’s what’s going to drive future of the automotive industry,” she said. “We should be looking at how these three worlds collide and come together to add value to the end-user.