For space requirements this blog has been split in 4 parts:

In continuation to previous blog in this blog I am going to show step by step procedure to display hierarchies in S/4 using analytical CDS views. I will use manger employee hierarchy as an example here.

To achieve this you need:

The following diagrams show high level architecture of these views and their relations, as well as an example of a simple representation.

The display would then show a tree structure of the employees below the manager, with sub-ordinate managers as hierarchy nodes.

Below are the steps to be followed to display S/4 hierarchies using CDS views:

1. Construction of Employee Manager Sample hierarchy:  if you have hierarchy already in place you can skip this step otherwise you can check my previous blog for evaluating the hierarchy using CDS table function.

Below is the sample code for constructing hierarchy:

2. Dimension View Creation: Before Creating dimension view you need to know what is dimension view, View becomes dimension view if data category annotation @Analytics.dataCategory:#Dimension is specified. By specifying the dataCategory the developer can give directives and hints to an analytical engine how to interpret individual entities.

Dimension definition: A collection of similar data which, together with other such collections, forms the structure of a cube. Typical dimensions include time, product, and geography. Each dimension may be organized into a basic parent-child hierarchy or, if supported by the data source, a hierarchy of levels. For example, a geography dimension might include levels for continent, country, state, and city.

Below is the sample code for dimension view:

if you observe the code there is self association(view name ZEMH_I_Employee and association name is same) with cardinality [1 : 0..1] pointing to the parent node of the node is written which is mandatory in the dimension view which is used for recursion of Manger and employee.

Then you will see the dimension view structure, click on standard query button as below to test the output in query monitor

Result is shown as below:

Every analytical view whether it is a dimension, fact, cube or query view attributes has row, column and free characteristics. You can test by moving the attributes from  free to row by clicking on down arrow as shown above.

if you find empty values move the attributes free to row then you will get the result.

3. Cube View Creation: Cube view indicates a star schema. Usually it is used for a “View Entity” with a “Fact Entity”(View) in the center and “Dimension Entities”(View) around. View becomes cube view if annotation @Analytics.dataCategory: #CUBE is specified.

Fact Entity(view) indicates that the entity represents transactional data. Usually it contains the measures. So first we have to create a fact view which has measures for employee such as actual and planned working hours.

Below is the sample code for fact view:

Below is the sample code for cube view:

Repeat the Testing Dimension View in step2 for testing cube view results. Results would like below:

Sum of actual and planned hours is displayed as above in the cube result.

Your suggestions, feedback, comments on this blog are most welcome.

Could you please give bit more details on annotation @ObjectModel.representativeKey? Like when is this mandatory and what is the use case?

Nice blog indeed. Thank you very much for this information.

Do you know how to achieve a hierarchy with external dimensions as pictured  here after in this BW example? I am trying to figure it out, but I must be missing something. 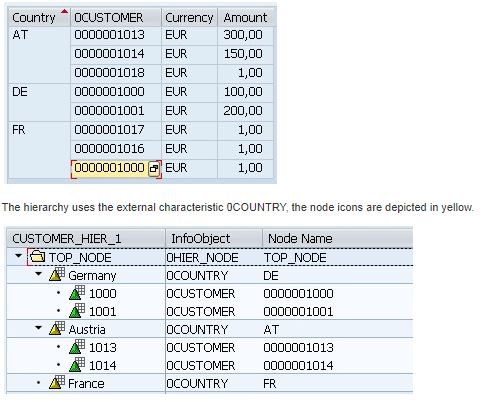 We tried to display hierarchy using Hierarchy CDS views and it is fine in "Analysis Office" but the expansion of nodes are not working if the same is consumed in Fiori Elements List report.

The issue is detailed in (https://answers.sap.com/questions/581579/node-expand-not-working-in-hierarchy-cds-view-cons.html). Please can you let us know your comments.

I want to use merchandise Hierarchy already created by business in CDS view report. For BW we have datasources 0material_LKLS_Hier ,LKLP_HIER, etc for the same. How do I do it in CDS view ? Functional consultant has asked us Function Module MERCHANDISE_GROUP_HIER_SELECT.  I cannot use FM in CDS view. Is reverse engineering the FM the only solution ?

While building hierarchy and with data category as dimension i am not able to add a parameter to the view.
Is it a limitation in CDS? If yes, can you please let me know an alternative solution.