Welcome back to the second part of the SAP S/4HANA Cloud use case series. Last week we kicked off this new series, taking the tradition of the use case series into the cloud. In the first blog we talked about “efficiency” as a new value lever and today we will give more insight on the next dimension, the increase of effectiveness.

In the last blog, we already learned about the change needed to move into and excel in the digital transformation, whether it is processes or even entire business models. And that complexity is a factor that prevents a successful transformation and therefore the classical enterprise core needs to be redesigned. But how exactly can the digital core contribute?

With the following value levers, we develop a concept, which can reflect the success, and on which all use cases and application are compared to. 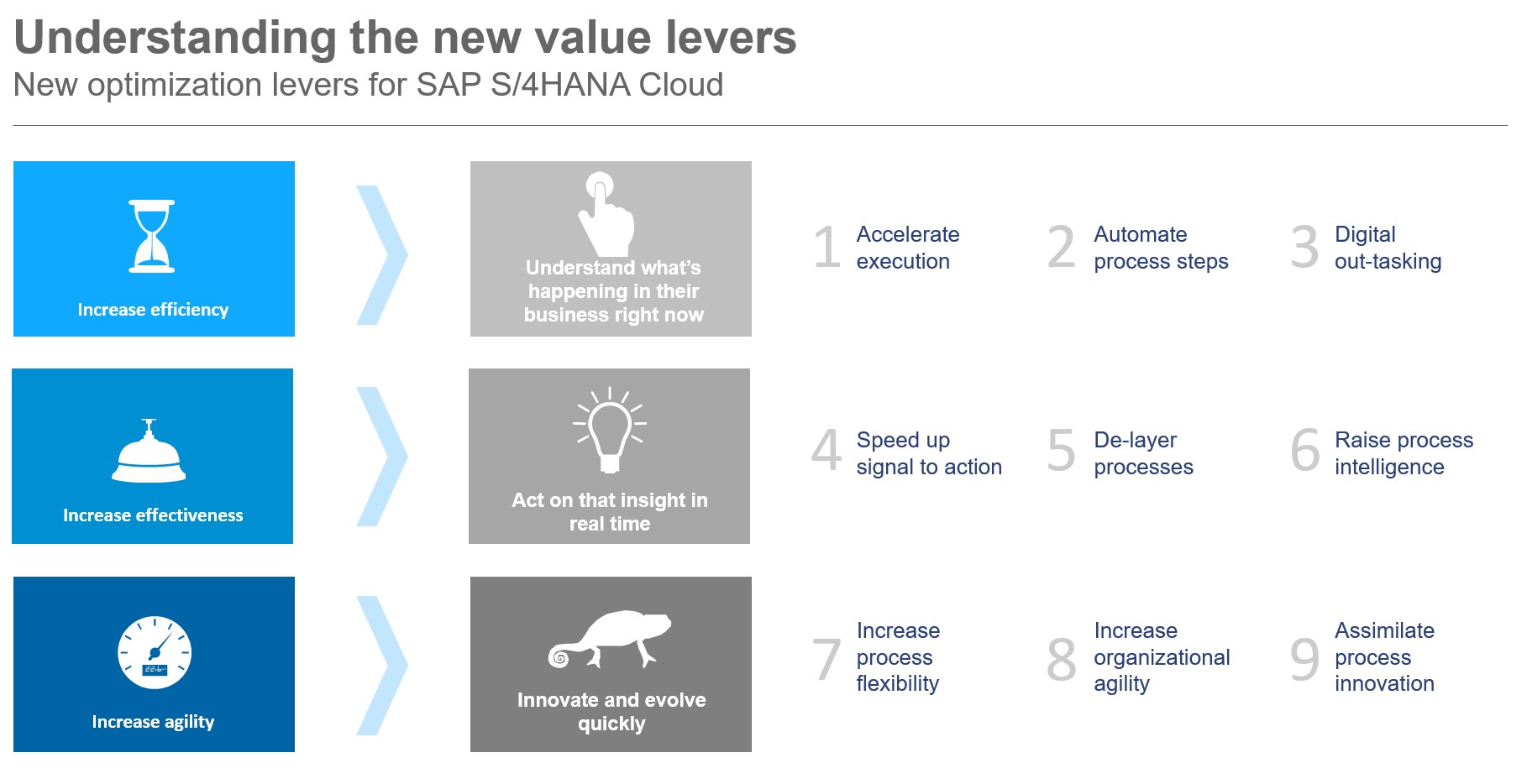 Generally spoken there are three dimensions that drive every organization, and measure the impact of the digitized core on the organization and indicate how much the processes has developed, to the positive or negative. These dimensions are:

With effectiveness, we are doing the right things and we have the right processes in place to achieve my targets.

In this dimension, we will have again 3 value levers:

Speed up to signal to action

Speed up signal to action can be seen as result of the previous lever ‘automate process steps’ and follows the same mechanisms.

If you automate a big junk of processes, there might still be some important ones among them that need more careful human interaction.

This is where the affected person gets notified and this is what we call the signal.

Before, the user would have gotten tons of these signals every day, and had to consider each single one of them manually. With the tons of data created every day, how are people able to identify signals amongst all irrelevant information in front of them?

With the analytical layer build in, the system identifies pattern and only relevant signals, are made visible to the user.

The decision, the action, follows way faster now, making you do the right thing – being more effective.

All of this we also call exception handling and it is leveraged in the responsive design concept.

The user can now rely on and react to signals and exceptions provided by the systems due to identified shortages for example.

The de-layer processes is an advancement of automate processes, and this lever emphasizes that multiple workflows cannot be merged into a single one. Let’s talk about one example:

Before: Let’s say an agent needed to retrieve information from an analyst. He has to request it and wait till the analyst forwarded them to him.

Now: The agent also needs an approval from his manager, which again takes sequentially interaction from that side and, meaning lost time for everyone.

By automating the two interaction from the analyst and the manager and seamlessly integrating it into the workflow from our agent, he can now finish the task in one go and does not lose focus.

This, for instance, can support the detection of fraud, by taking complexity from workflows and making them more transparent and streamlined.

Value lever number six is making our processes even smarter.

With the classical approach you have to rely on your guts feeling and on delayed information which often is old and not true anymore. This information itself often has to be collected manually.

But by capturing data, like click patterns, sensors or geographical information, you can now make decisions based on real time information which are 100% accurate.

Making your big data smart data and using predictive algorithms, analytics are enriched and then embedded into the process in order to help doing the right things.

With this we took a closer look at and gained a better understanding of the second dimension of the value levers. In the next blog we will examine the last dimension, agility, before we will go into the actual use cases. These will explain the dimensions and value levers a little deeper and show you the innovations done with SAP S/4HANA Cloud to cover the new challenges driven by the digital transformation.