Refugees and Issues Faced by them in Australia

As post Graduate students studying at Victoria University, we are really fortunate enough to work with influential mentors. One of them is our lecturer Parvez Ahmad, who made us write this blog as part of our course assessment and we must say that this is a challenging experience for us, because it is our first ever blog on any forum.

According to 1951 convention relating to the actual status of the refugees in Australia, defines a refugee as:

“Any person who owing to a well-founded fear of being persecuted for reasons of race, religion, nationality, membership of a particular social group or political opinion, is outside the country of his/her nationality and is unable, or owing to such fear, is unwilling to avail himself/herself of the protection of that country”. As this definition is followed by the Australian Government to actually find out whether Australia has any protection obligations towards he specific individual. In case if the individual is determined to be a refugee, Australia is fully obliged under the international law to offer and provide that individual a protection and full support to ensure that they will not be sent back unwillingly to the country which they have risk in (Lawrence, 2017)

the United Nations has also described the actual situation or criteria to assess any individual claim for refugee and this is most commonly accepted definition of a ‘refugee’ is set out in the United Nations 1951 Convention relating to the Status of Refugees (the ‘Refugees Convention’). This Convention defines refugees as people who are outside their country of nationality and are unable or unwilling to return because of a well-founded fear of persecution for reasons of race, religion, nationality, political opinion or membership of a particular social group. It is the key document outlining the obligations under international law for countries who have signed the Convention (United Nations, 1951)

Australia is one of the richest countries which eventually accepted many refugees from different countries. As Australia also comes under the international Law which was developed in 1951 and discussed above, which allows some specific criteria for the individual to proof his/her self as refugee. We find some important data relate to refugees coming to Australia by boats and air both ways but Australia has faced serious consequences from the un authorized boats and it made it really hard to follow the 1951 United Nations convention for refugees. However, the Australia has practiced with different policies because people who come illegally in this country by boat usually apply for asylum which eventually was a tough for Australia to identify if the specific individual is refugee or just pretending to be a refugee. Such migrants make their way from some of the world’s trouble spots such as Afghanistan and Sri Lanka towards Indonesia or Malaysia, where they actually engage or set up a deal with the professional smugglers who basically arrange a travel to Australia on small boats or fishing boats which was banned and now allowed by the Government after amendments in refugee and asylum seekers policies.

This column chart in figure:1 depicts the duration of refugees coming to Australia from year 1994 to 2015, which includes all age groups from child, youth, old and women and male both genders. According to data in 1994 total 3992 refugees were resettled in Australia which was almost 27% of Humanitarian program 14,858 in that specific year. Similarly, the highest number of refugees came in year 2012, which is 12,012 of resettled refugees in Australia which is 60% of the 20,019 Humanitarian Program visas granted in that year. Similarly, the data shows the lowest number of refugees resettled in Australia in the year 1996, which is 3,334 which was only 28% of the humanitarian program visa granted to people. All of these people came from different countries which are considered as focus group refugee countries under the United Nation refugee categorization. In the year 2012 when most refugees came to Australia is because of war in Iraq, Syria and Afghanistan from the last past years.

Fig:2 Number of Refugees Visas granted in 2014 to 016 in Australia by Birth Countries

The chart above was specifically focused on the recent data of year 2014-015 and 2015-016 which shows the number of refugees visas granted by Australian Government in recent years to different refugees from nationalities. As this data is based on the birth countries of refugees which allows to identify the refugee’s nationalities data in recent years. The data shows the highest number of refugees came from Iraq in recent years which is almost 2551 refugees in year 2015 because of the certain different conditions in Iraq as War is going on there. Similarly, the data shows refugees coming from Syria which is 1884 in year 2015 which is comparatively less than the year 2014. However, all of these countries above in chart are listed under the United Nation 1951 convention which entitled a specific definition about refugees. The Minimum refugees in recent years came from Bhutan 207 and Pakistan 210 in year 2015. Comparatively depends on the situation refugees have in their countries which is determined by the Australian Government before granting them refugee status in Australia under the 1951 convention. 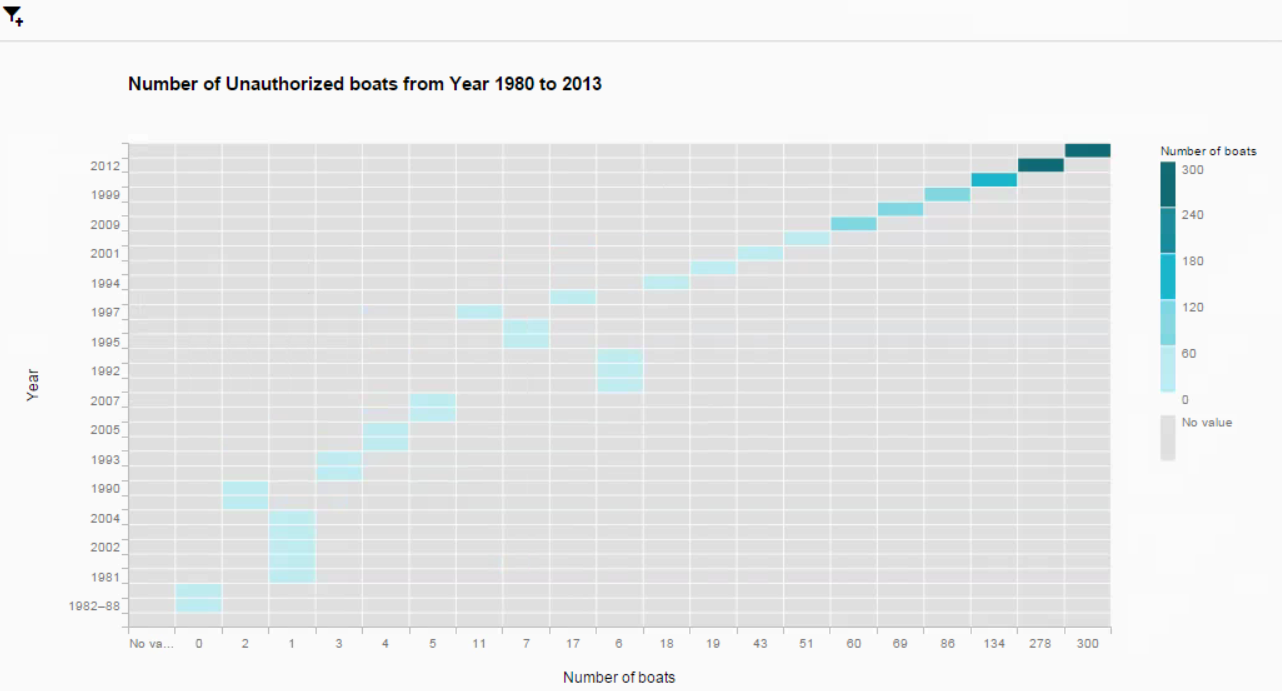 This quick guide in the figure provides statistics on the number of asylum seekers that have arrived by boat in Australia since 1976 when the first wave of boats carrying people seeking asylum from the aftermath of the Vietnam War began to arrive.

However, our calendar year figures since 2009 have been compiled from a single source—regular advice provided to the Parliamentary Library by the Australian Customs and Border Protection Service. As a result, we can have confidence in the consistency and accuracy of that data (Phillips, 2014). However, the graph shows the highest number of people came in year 2012 and 2013 which is the highest number of unauthorized boats came to Australia from different countries specifically from Iraq and Syria, which was 17,204 refugees in 2012 and 20,587 in year 2013 and after these year Australian Government did not allowed any people from unauthorized boat arrivals in Australia till 2017. There is also one Pie chart visualization for unauthorized boats in Australia is shown below which elaborates percentage of detention and Granting temporary protection Visa. 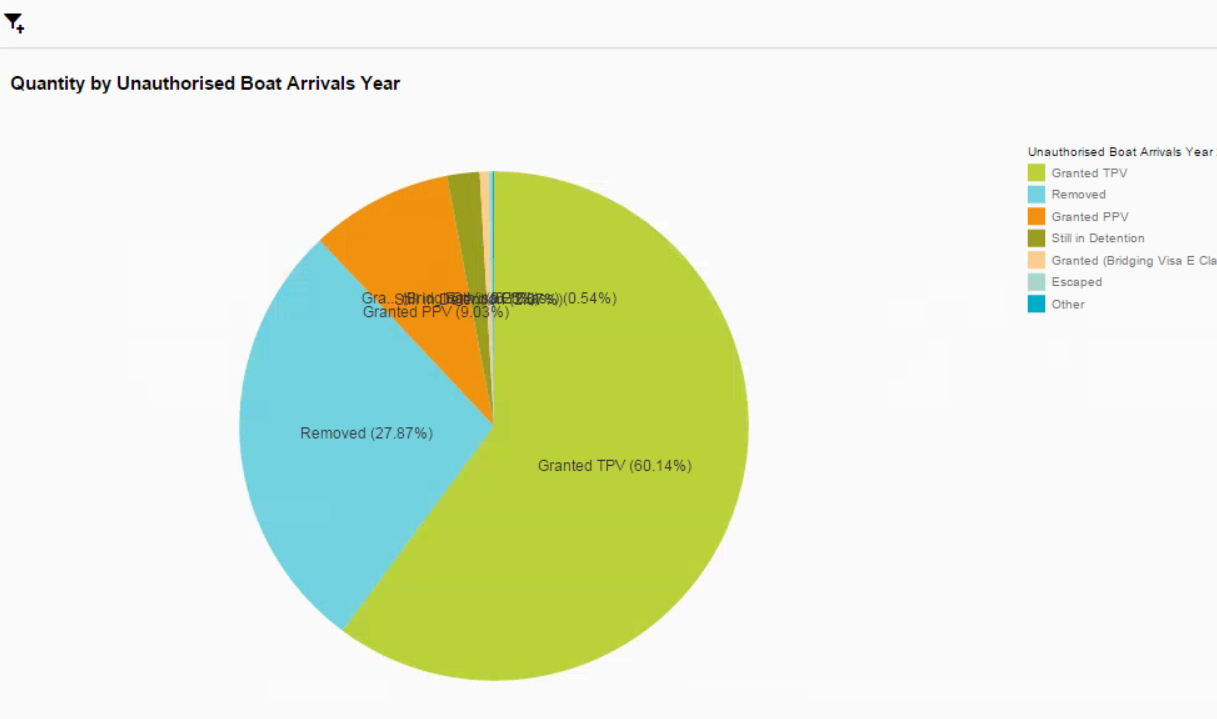 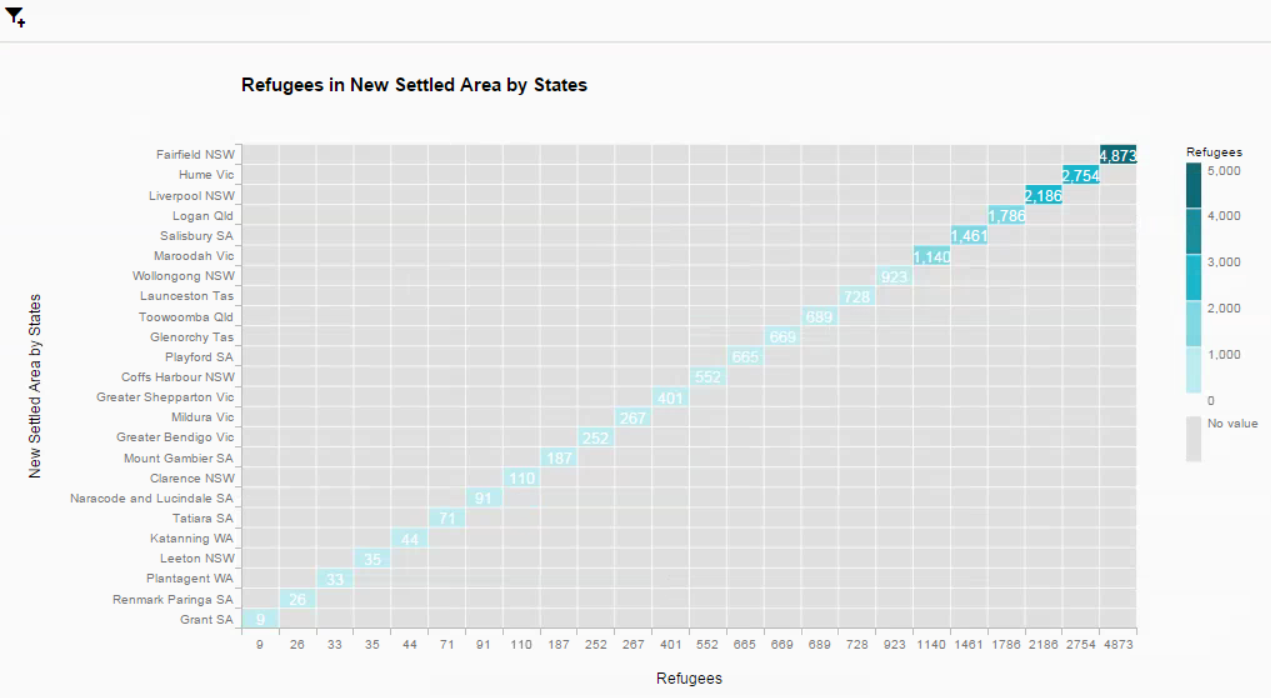 This table shows the areas, which, in the last 4 years since the 2011 Census, have added the largest share of their migration from the humanitarian stream. The largest numbers are in culturally diverse metropolitan areas, but the presence of regional areas on the list is quite strong as they get relatively few migrants in the skilled or family streams, so when they accept refugees this makes up a larger share of their total migration (THE CENSUS EXPERT, 2015). However, the latest announcement by the government is that we will increase our intake from Syria but not the total humanitarian intake and therefore the refugees came to Australia and got settled in different states, according to census 2011 the Fair field NSW has settled more refugees in any other area which was 4,873. All of these refugees were fully supported by the Australian government and they faced different issues in the Australia.

The fig:5 elaborated the issues faced by the refugees in Australia as they did not have any knowledge when they came to Australia. However, some of the major issues were Spoken Language (English), Cultural Barriers, Difficulties in Learning new system, Racism, financial Hardship, Discrimination within the rental housing market, lack of appropriate accommodation. These all issues affected the refugees at a very grate level and Government of Australia helped them to resolve these issues, provide them proper knowledge and training in different community centers to understand the rules and regulations in Australia, so that all of these refugees can be resettled easily. Moreover, English language literacy was a major barrier that prevents migrants from mixing into the wider community, accessing services and gaining employment.Similarly, the participants socioeconomic status had improved compared to back home. They felt safe and secure in the new environment and were happy with the freedom of speech (RENZAHO and DHINGRA, 2016). 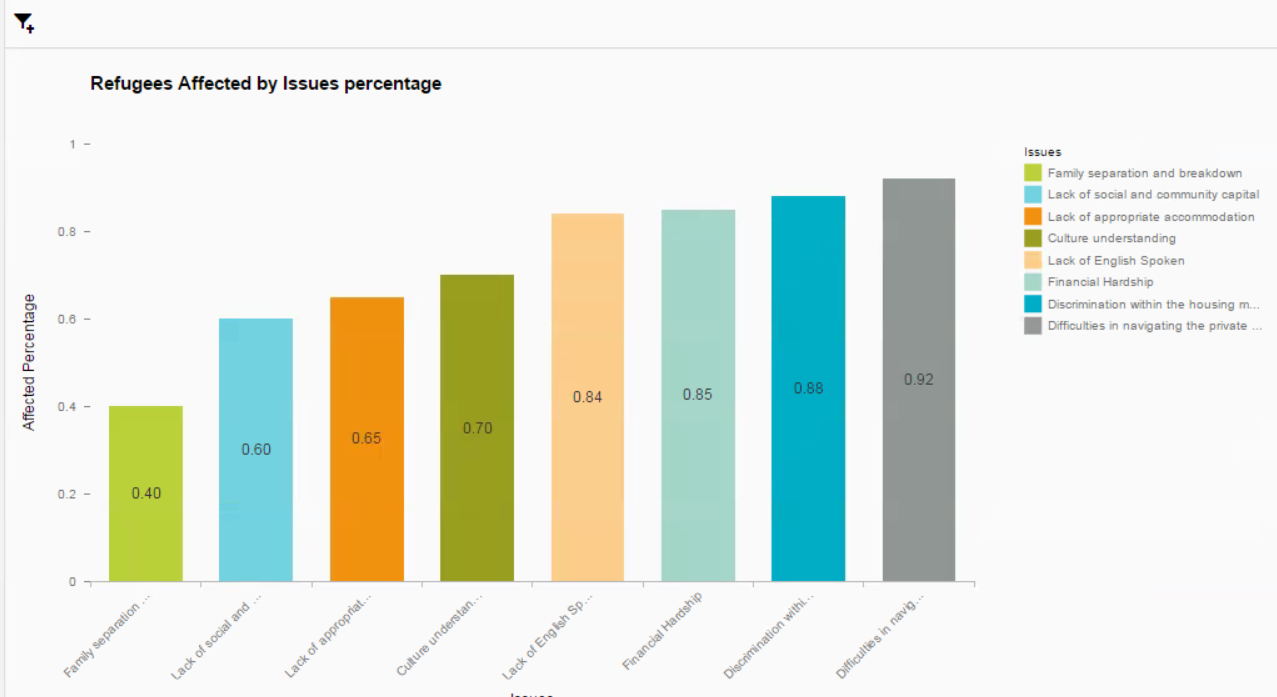 This fig:6 above elaborates the wide range of most affected issue for refugees in Australia, as you can see in the Chart the most maximum number of issues are related to their daily social life which they are spending in Australia. However, these barriers for refugees were tough enough to overcome without the help of Government of Australia, which helped every individual to life a safe and healthy life. As they were provided proper place to live on the other hand when refugees got Permanent Visa status they moved to private rentals where they faced discrimination in housing market. Also there were other issues like Language spoken 84 %, understanding of culture 70% but these issues were most affected to people from the age of 40 to 60 as they were not successful to develop and improve their skills to live their life in Australia. So these age group faced more hardship than youth and child.

Aph.gov.au. (2017). Refugee resettlement to Australia: what are the facts? – Parliament of Australia. [online] Available at: http://www.aph.gov.au/About_Parliament/Parliamentary_Departments/Parliamentary_Library/pubs/rp/rp1617/RefugeeResettlement [Accessed 16 Feb. 2017].

How many refugees are there? – refugee council of Australia (2016) Available at: http://www.refugeecouncil.org.au/getfacts/statistics/how-many-refugees-are-there/ (Accessed: 15 February 2017).