The Enterprise Portal (EP) serves as a baseline channel towards providing a centralized means of access to organizational information, data and applications. As we know the content contained within the Enterprise Portal itself is particular to a company’s operational processes.

A functionality known as “Broadcast Messaging” can be utilized as a means to send and transmit important information messages across the Portal. These messages can be tailored according to administrator preference and are then subsequently set out to end-user bases. 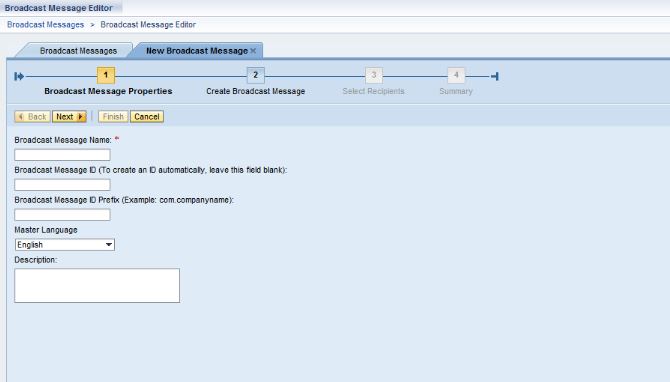 The Broadcast Message Framework iView should be located in the hidden container and not in the masthead container.

In order to configure the functionality as per business requirements and operational preference, the following documentation can be utilized as a guidance source:

A sample UI iView (like the one highlighted in the article above) can be added to your classic/afp framework page.

The application can be found under:

The BCM Setup and the sample UI was developed for the AFP in Quirks mode and there are no plans to expend it and support also the standards mode. As per the documentation guide sample in true essence this is only a sample UI, designed for functional testing of the framework and customers are free to develop the UI by themselves.
The Sample UI provided with the BCM is supported only in out of the box Ajax Framework Page and Classic Framework page without ANY customization. Any custom pages will require a new BCM Setup (your own custom UI) to be run alongside it.

One critical point of interest in the case of not being able to broadcast new messages it to firstly ensure that compatibility mode  is not setup & enabled -> Compatiblity Mode or Enterprise Mode.

After verifying that compatiblity mode is NOT enabled double check and see now that the BrowserDocument Mode in itself is maintained correctly as IE=5.

If both of the above checkout ok (i.e. they are set correct) then you can capture traces from the broadcast location to troubleshoot further

Does BCM work for an anonymous users?

I hope you are keeping well and everything is good on your side. Greatly appreciate the feedback 🙂

To answer your query from a high level viewpoint BCM is suited to Portal admins or super users to essentially get information out across the landscape.

Once you have configured your portal to accept anonymous users and the associated end rights are maintained for a "user" yes they will be able to broadcast messages (IN THEORY).

I'm a basis guy trying to make this work.  I have very little portal experience.  Is there a step by step guide you have?  Perhaps "Broadcast Messaging for Idiots?"