I wanted to revisit the basic use of Git because there have been several changes in the last six months to make it easier to use, as well as changes in the SAP Cloud Platform.

I’m glad the topic is getting some exposure — thanks to Kiran for her recent blog on the topic, especially a view in the SAP Cloud Platform cockpit showing how to create a new version of an application from a specific commit. Still, there are a few additional things to show, including multi-developer scenario.

Below I will spell out the steps, but here’s a fresh 3-minute video that shows the complete steps for starting working with Git in a multi-developer scenario.

How to work with Git

Here’s the workflow for the first developer (with tips along the way).

Now a second developer is interested in working on the project.

Back to the first developer, who wants to get the latest changes.

That’s it. In upcoming blogs, we’ll go through what happens when there are conflicts, and how to use Gerrit for code review and collaboration. 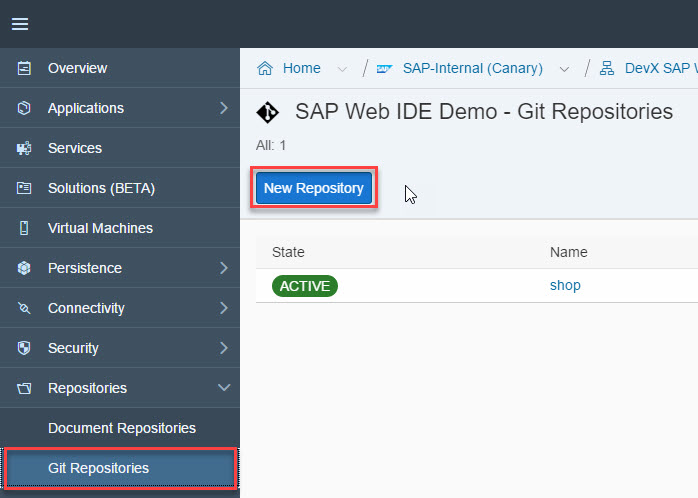 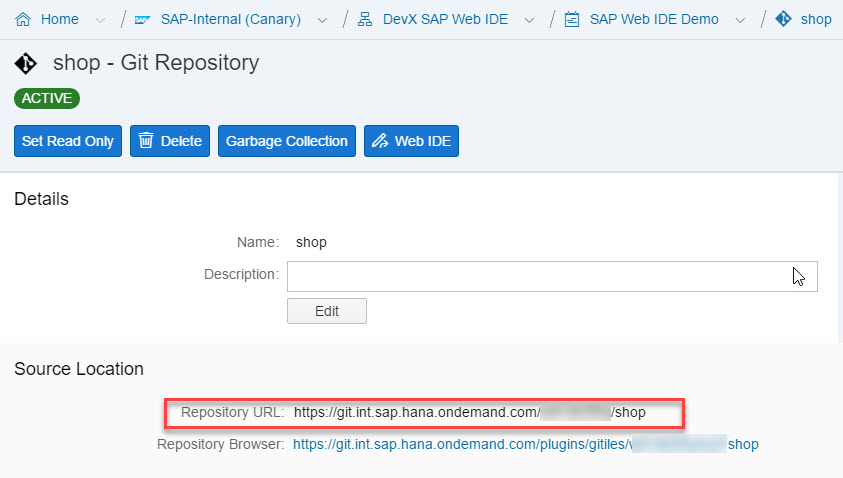 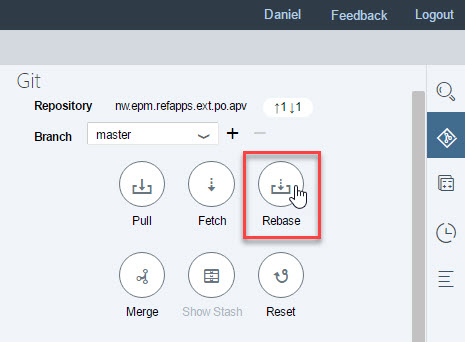 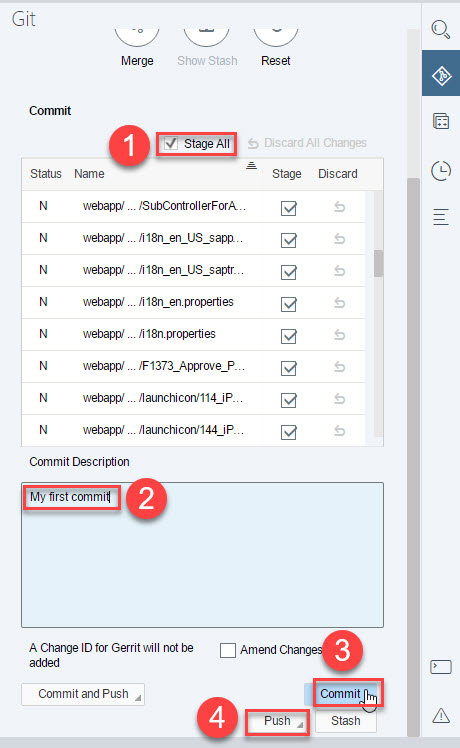 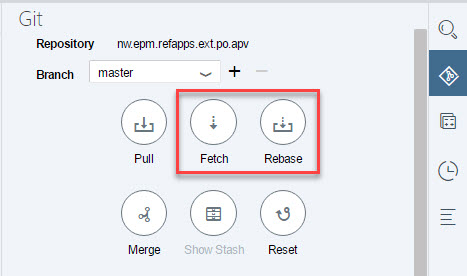 I have two trail accounts. In one trail account, I have created GIT repository and stored sample project created in that account.

I tried to clone  the same repository in other trial account, I got error as "Service not enabled".

Please can you help me to understand the issue.

There is no supported use case where a user from one account will get access to a repository in another account. The use case I described was with 2 developers in the same account. You could of course use Github, but you essentially have the same issue -- you need to create an account in Github.

This is actually feasible on trial as well.

In the past you use to have a dialog where you could enter your credentials, but in a trial scenario I wasn’t making sense as you would only use your GIT.

So the dialog is now simplified with just the remote source url only.

So to connect to a remote account GIT on trial, you will need to adjust the repository url and include the remote user id in it like this:

Then you should get prompted for the password for <remote scp user id>. Make sure you check “Remember password”.

This is exactly what i’m looking for.

I tried your suggestion, but when i Input the password for  <remote scp user id>, it does’nt work. It says “Not authorized”…

Just to clarify, the password im putting is the pasword for the <remote scp user id> user, the one i use to login to SAP HCP.

Is there something i’m missing?

Let's say I'm user A with my Git repo name myrepo I want to share with you, let's call you user B.

So, from a WebIDE session under user B credentials, I would enter:

Then I will have to enter user A password when prompted.

It was working when I wrote the response, but I haven't tested it since then to be honest.

Thank you very much for your answer!

Yes, that's exactly what i'm doing, but i get the "Not Authorized" message...

May be it's not working anymore?

If it's not much asking.. when you have a minute could you try if it's working now? Just to discard that it's me doing something wrong.

Is it possible to get Git Repository files and content ? other application ? we need any API support here ?

i will tell you my case:

i have one input files and button . in the input filed i give hcp git url  like https://git.hanatrial.ondemand.com/p1xxxxx/fioridemo.

after clicking submit button i need to get the “fioridemo” files and content in table .

i get succeed using github.com to get the user repository  files and content by using https://api.github.com/ API file.

is there any API file to get the HCP Git repository ?

please suggest me on this.:)

I also tried your approach but even after entering the password of userA while cloning the userA's repository in userB's webide, it is not working. I am sure that I am entering the correct password.

Can you help in this?

As @Michal Keidar remomended you should create a question for this.

At the time I provided my response it was working, but since then the WEB IDE and The GIT integration in SAP Cloud Platform may have change.

OK, I thought you meant you had one user who had access to 2 SCP accounts. So in essence you have simply set up 2 trial accounts (with 2 different users) and do not grant permissions across accounts. Right?

yes, 2 trial accounts (with 2 different users). Then from one setup the GIT, and on the second use the first one credentials as mentioned earlier.

Let me know if it worked for you.

Unrelated question - how did you tag the persons in your comment?

@Abdel DADOUCHE - does it work? I don't think it works..

It use to work 🙁 @Michal Keidar

Can you answer my question ?

I think url should be:

I tried this way sharing repositories between two trial accounts and it worked! Thanks a lot! =)

Is it possible to get Git Repository files and content ? other application ? we need any API support here ?

i will tell you my case:

i have one input files and button . in the input filed i give hcp git url  like https://git.hanatrial.ondemand.com/p1xxxxx/fioridemo.

after clicking submit button i need to get the "fioridemo" files and content in table .

i get succeed using github.com to get the user repository  files and content by using https://api.github.com/ API file.

is there any API file to get the HCP Git repository ?

please suggest me on this.:)

Unfortunately, I didn't found any API exposed for GIT repositories hosted on the SAP Cloud Platform.

May be @Daniel Wroblewski will have an answer.

Thanks for the return.

i'm able to get repositories from Github actually.

When I pull remote repository to my local branch in SAP Web Ide, I've got this problem with GIT:

I've searched but found no solution, the only solution is mentioned here.

They suggest to update the git version to higher version, but it seems unable to do so in sap web IDE. The Web IDE also does not support git command line so there's no solution to get over this bug.

Could you please support this case?

I have not encountered this problem. Can you do a Fetch and then a Rebase?

The git system has fixed the problem.

After getting the error, I've tried to Fetch then Rebase but I didn't work.

After sometimes, Git system has fixed the error (I'm not sure how) by merging all the changes into one commit. I've searched the Internet and the community mentioned that this is a bug from Git.

I hope we won't encounter this bug in the future.

Hi, when I try to clone the Git repository to my workspace from HCP, all I get is gitignore file. WebIDE console gives error (CloneandOpen) Path parameter not found. I cannot find any solution or description of the similar problem anywhere, do you have any idea why cloning git is not working for me?

It's tough to diagnose...can you provide screen shots and exactly what you did, and the exact message?

Hi, Daniel, I found the reason why it is like this - the GIT master branch link is empty, instead tree is visible and is located under the version tags. What could be done so I could get to the tree and clone it to webIDE?

Uri Nizan Can you suggest an answer?

If it is possible please attach a screenshot and/or update the scenario.
Please specify what is expected and what is the actual result.

After using GIT in SAPWEBIDE, i'm having this issue for every single view that i try to open in Layout editor:

Testing with same project outside GIT it's working...

Michal Tall Do you know anything about this issue?

Any news about the Git clone repository above?

First, please create a separate question for your issue, and not as a comment in a blog.

Second, I see from your screenshot that you're using the old version of Web IDE. Please use Web IDE Full-Stack, and if you're still having this issue, either open a support ticket (if you have a paid license), or create a new question.

Mauricio Pinheiro Predolim I confirm it's working on trail webide.

GIT on user A, cloned to user B, using credentials on user A.

This is very helpful.

Can you tell me after this can we fetch this code  in Visual studio code with the help of SAP Git repository ?

If yes could you please tell me how to do this ?

Hope that helps a little 🙂