Thinking About Empathy This Valentine’s Day: How Corporate Volunteers Can Change The World 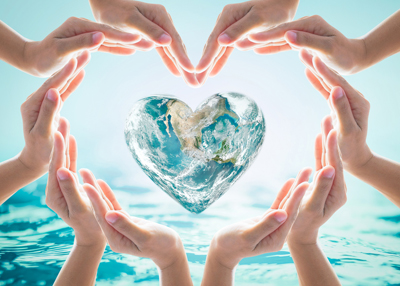 Volunteering is about getting involved with people, situations and issues that we’re unfamiliar with, motivated by the greater good. However, serving meals to the homeless one holiday night a year, while highly laudable, isn’t going to solve homelessness. Tens of thousands of volunteers focused on strategic change that makes sense for employees, the organization, and the non-profits in their orbit – now that’s something entirely different. Many leading companies have begun putting a strategy around corporate volunteerism, and in doing so, effecting increasingly valuable change during the last decade or so.

Angela Parker is Co-founder and President of Realized Worth, a consultancy that designs and implements corporate volunteering programs.

“When we see our leaders giving back to the community and demonstrating that this is important, it begins to shift corporate culture,” said Parker. “When you do that on a major scale, you have potentially hundreds of thousands of people acting differently, which is incredibly influential to society. Looking at it as a social movement is an opportunity that companies and non-profits are beginning to see.”

Realized Worth is sponsoring through its non-profit arm, RW Institute, an openSAP MOOC entitled, “Empathy in Motion: The Power of Employee Volunteering.” Targeted towards anyone involved with corporate volunteering programs, as well as non-profit organizations interacting with them, the course lays out a framework for designing employee volunteering programs. The leaders coming out of this course will be able to guide people through creating a transformative experience.

Realized worth CEO, Chris Jarvis, explains in the above VIDEO, why volunteering reminds people of what it means to be a human being.

Which brings us to the empathy word, appropriately enough near this Valentine’s Day. I’ve been avidly following online conversations about empathy since my company’s CEO, Bill McDermott, introduced it as SAP’s highest customer priority. I couldn’t resist asking Parker to weigh in on the empathy question.

“Empathy is when you feel someone else’s pain. But we can’t be paralyzed by that pain,” said Parker. “Volunteering gives people a way to process that pain and act on their empathy for others. That’s where volunteering is so valuable, providing avenues to show compassion by your actions. When we take action, new synaptic pathways begin to form in our brain and we think differently about things, and cannot objectify other people. That is world-changing.”

Regardless of where you fall on the argument wheel, most everyone agrees that empathy is essential for human survival.  According to Parker, volunteering allows us to face new issues that change us as we participate in those activities. “When you take volunteering to a huge scale, and begin participating in activities and realize you are complicit in this, studies show one part of our brain lighting up, and this actually changes our brain.”

While Valentine’s Day tends to revolve around the obligatory flowers and candy checklist, Parker suggested that going through a checklist can remind us of what we believe in, and what matters. Similarly, volunteering might begin with an isolated act of kindness that reminds us of what we believe in vis-à-vis the bigger human picture. If empathy is the trigger to take corporate volunteerism action, that’s a world-changing philosophy. Happy Valentine’s Day!