Data Visualization: How to use Simple Design for Complex Ideas

Data visualization is more than charts and graphs. It’s storytelling that empowers business users to create powerful decisions based on data.

Successful design helps to explain complex information in a simple way. It’s mindful creation of visualization such as charts, graphs, color, labels, and ranking. When done right, even the most complex idea can be understood beautifully.

Whereas poor design can make any idea, regardless of simplicity, difficult to understand.

Take the two graphs below. Both graphs use the same dataset with the goal of communicating the gross margin of a company by quarter. 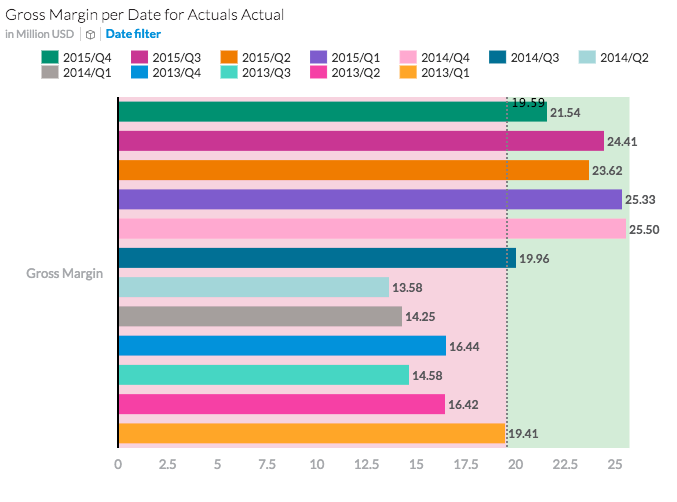 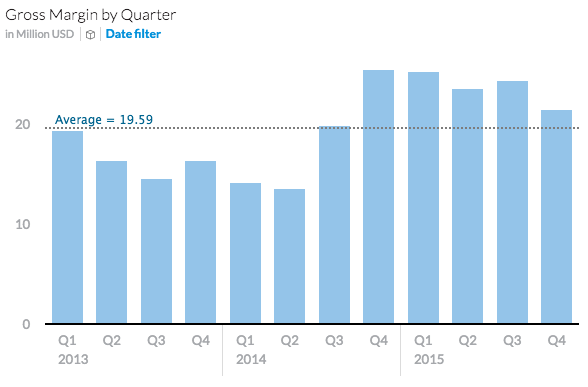 Due to the haphazard design of the first chart, it’s hard to understand the meaning. Whereas the simplicity of the second chart allows us to see, at a glance, which quarters were most successful.

Get started today with your free trial for SAP Analytics Cloud. Sign up now.

Data Visualization: Do More with less

When it comes to charts and graphs less is often more. The goal of a well-designed visualization is to communicate information quickly, not cumbersomely. Therefore, it’s important to strip away anything that is not necessary to tell your story.

Ask yourself: what story do you want to tell? Data visualization is all about taking data and transforming it into actionable insights that tell a story. And when you tell the right story, you can help make powerful decisions.

By asking yourself what kind of story you want to tell with your data and what message you want to convey to your audience, you’ll be able to choose the right data visualization types for your project or initiative.

Work to remove redundant information. For example, if the title of your chart includes the variable being measured, such as gross margin, the legend is redundant and can you can remove it.

Typically there are two ways to order your information, either chronologically or by ranking.

When one axis of your chart is a timeline, don’t mess with it. Choosing to order information by another variable instead of time is confusing and makes the chart harder to understand.

When you are comparing variables you may want to rank them. For example, a company with a sales focus may want a visual ranking their top selling brands, or top performing salespeople.

With SAP Analytics Cloud you can easily rank your information from highest to lowest or vice verse. You can even choose to display the top or bottom 5 variables. 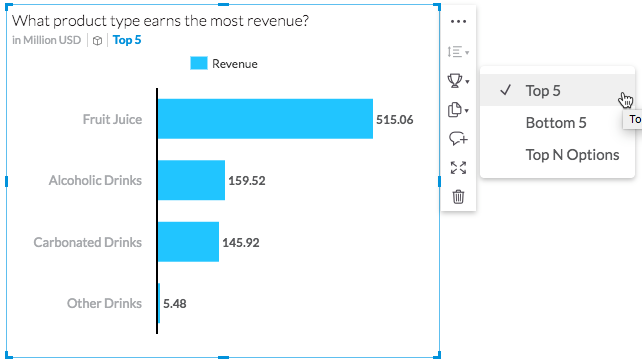 Be sparing with color

Rainbows are beautiful, but your visualizations shouldn’t necessarily look like one. It’s important to incorporate color with intention. Color should be used to enhance your message, and not as decoration.

A good rule of thumb is to use colors to show differences in categories as opposed to differences in values. What does that mean exactly? Take the examples below.

The chart on the left uses the y-axis to label the states, so it’s easy to see which state has earned the most revenue. However, the bar chart on the right color codes the states, this means a legend is necessary to understand the chart.

Because the bars in both examples represent revenue, which is a value, it’s better not to color code them.

The chart on the left uses the y-axis to label the states, so it’s easy to see which state has earned the most revenue. However, the bar chart on the right color codes the states, this means a legend is necessary to understand the chart.

Because the bars in both examples represent revenue, which is a value, it’s better not to color code them. What not to do

Sometimes the best way to know what to do is to remember what not to do. Here’s a short list of design choices to avoid when creating visualizations based on your data:

3D
Using 3d on visualizations makes them harder to read and can distort the values and add an unintended bias.

Many colors
A large variety of colors makes a visualization harder to understand. Make sure all of the colors you’re using are unique so categories aren’t confused.

Repeating text
Double check that captions and labels aren’t redundant. Too much of the same text hinders rather than helps.

Overloading
Adding too many variables to a single graph forces your viewer to read every single element. This counteracts the purpose of creating your visualization in the first place.

On the question of pie charts

Pie charts are a fairly dichotomizing element when it comes to visual analytics. The main reason being that they’re often used incorrectly.

If you think you need to use a pie chart, first answer the following questions: 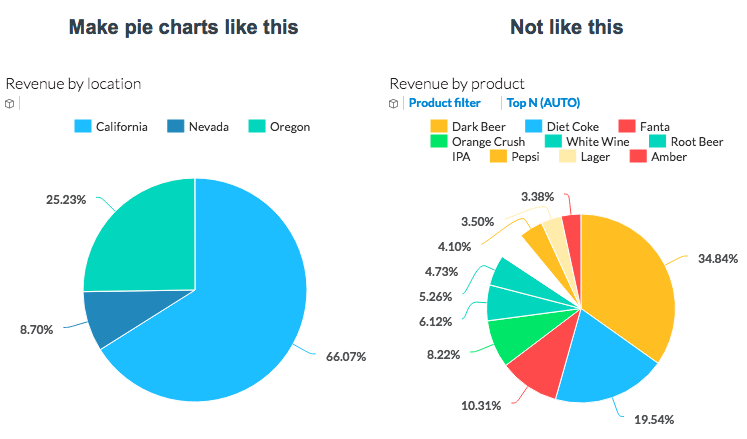 Lastly, get a second opinion

If you want to test the effectiveness of your visual, have someone take a quick look at it without any previous context. Ask them to describe what the chart is communicating. They should be able to tell you what the general trend is, and identify any outliers without further context.

The intuitive features within SAP Analytics Cloud make it easy for everyone to create simple charts and graphs, and even pie charts, based on complex data.