Four Visualizations That Changed How We See the World

Software solutions like SAP Analytics Cloud empower business users to create powerful visualizations based on data. The result of this BI is data-driven decision making. Choices informed by data help businesses to thrive in today’s fast-moving and competitive landscape.

Even though modern BI has been around for a relatively short time, it’s been over 150 years since change-makers started using visualizations to reveal insights and drive progress. Take, for example, the following visualizations that made big waves in history.

In 1854, an outbreak of cholera in London causes 127 deaths over a period of 3 days. And by the time the outbreak ends the death toll reaches 616. A contaminated water pump on Broad Street is deemed the source of the outbreaks. The source’s discovery is hastened thanks to visual analysis by John Snow, a local physician. Using a dot map, Snow tracks each case of cholera throughout the community. 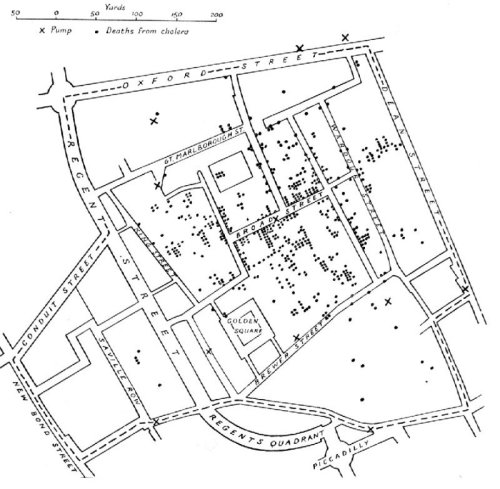 Snow discovers that the highest number of cases are in close proximity to a particular water pump located on Broad street. With the source of the outbreak identified, he canvasses the city to remove the handle to the water pump, consequently ending the outbreak.

Florence Nightingale is often credited as the founder of modern nursing. As a statistician and social reformer, she relied on concrete data to help make positive change. 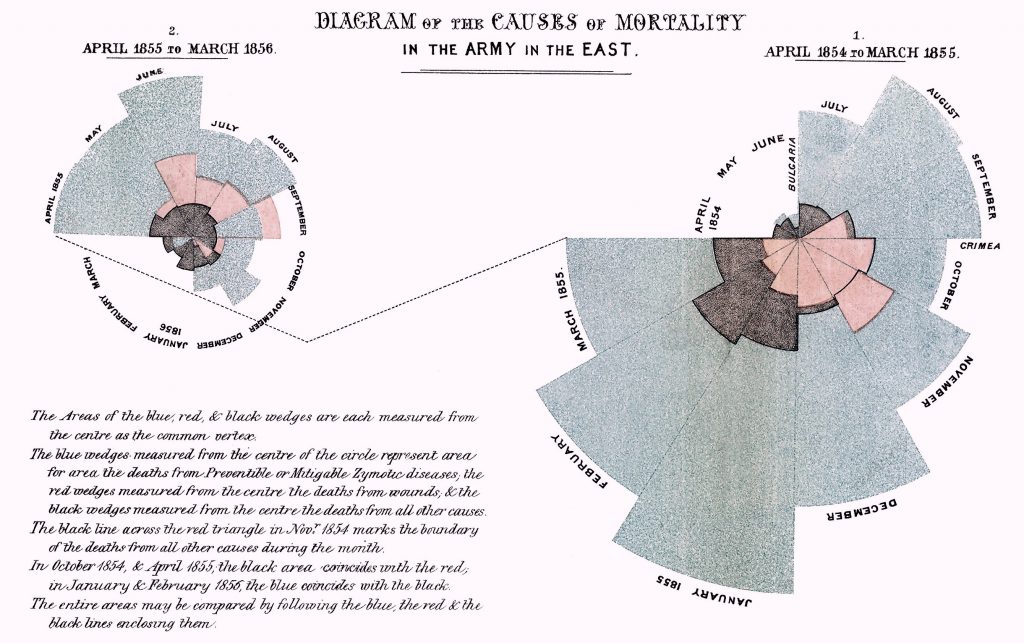 The conclusion is that most soldiers died as a result of preventable diseases (blue). Furthermore, the number of preventable deaths far exceed deaths from battle wounds (red) or other reasons (black). As a result of this diagram, Nightingale was able to petition for better sanitation in hospitals.

Charles Minard, a French civil engineer, tells the story of Napoleon’s invasion of Russia in a single drawing.

Minard’s drawing is known as one of the best statistical drawings in existence. It’s so effective because at a quick glance you can see the immense devastation suffered by Napoleon’s Army during the invasion. Minard succeeds in conveying the loss of life, retreats, the passage of time, locations, temperature, and geography all in a single graphic.

Until his death in 2017, Hans Rosling pioneered the use of data visualization to form fact-based world views. He’s a co-founder of the Gapminder Foundation whose mission is to “fight devastating misconceptions about global development.”

Gapminder creates and promotes interactive graphics based on international statistics. An interactive visualization comparing income and life expectancy around the world is especially relevant to their mission.

Watch this excerpt featuring Rosling from BBC’s The Joy of Stats:

Visual analysis based on concrete data has helped to inform how we see the world today. Furthermore, you can use the same practice to shape the future of your business with SAP Analytics Cloud.