Today, bicycle traffic is the fastest growing mean of transportation in Germany and many countries around the world. Also at SAP the bicycle is becoming increasingly important according to the internal commuting survey.

This is not only because of the much-heralded health advantages of cycling – supporting overall fitness, improving coordination and reaction time and doing all that in a joint-friendly way, but also in environmental and financial respects.

Every kilometer covered by bicycles saves up to 138 g of carbon dioxide compared to cars and we are not even talking about particulate matter yet. And not only moving, but also stationary traffic is pressuring our environment. Parking cars consume the same space as up to 10 bikes.

However, bicycle traffic has by far not reached its full potential. Estimates of the Federal Environment Agency suggest, that still 30% of all car rides could be replaced by cycling without any loss of time. Taking into consideration, that additionally to all these advantages bicycles are the fastest mean of transportation for routes up to 5 km, GeoNet.MRN, a non-profit organization aiming to improve the exchange of increasingly important geospatial information, and SAP’s sustainability Team decided to improve the cycling experience throughout the Rhine-Neckar metropolitan region.

In a SAP Next-Gen Project together with the University of Mannheim, University and University of Education Heidelberg and Julius-Springer Schule, SAP Young Thinkers are supporting the home of the bike on creating a demand-actuated user-centric bike route network. In a first step, a heat map, based on geospatial information of university and high school students, as well as SAP employees collected via an app, is generated to give indications of actually used bike routes and their usage frequency. The data will be analyzed with SAP HANA Technology, which helps to identify and mark particularly safe and/or speedy bike routes to school, university and office and allows a user-related selection of bike routes for the first time.

Subsequently, the students will explore the business potential of bike route apps and evaluate and deliberate corresponding business models. Important features and functionalities of a bike route app can be identified in a creative way by means of Design Thinking and Business Model Innovation.

Finally, the retrieved information serves as basis for bicycle route expansion and the bike speed route planning in the metropolitan region.

This idea was also met with enthusiasm by the Committee of the European Satellite Navigation Competition, awarding the Next-Gen Bike project with the 3rd Prize in their Baden-Württemberg Challenge. During the Symposium for geospatial information in Heidelberg, the award was handed over. In the following talk, Christiane Bauer (SAP Young Thinkers) and Hartmut Gündra (GeoNet.MRN) presented the SAP Next-Gen concept with the focus on the future of mobility, which was exceptionally well received by the audience. 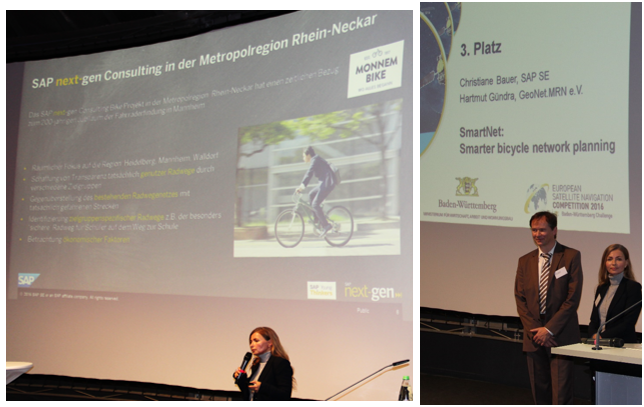 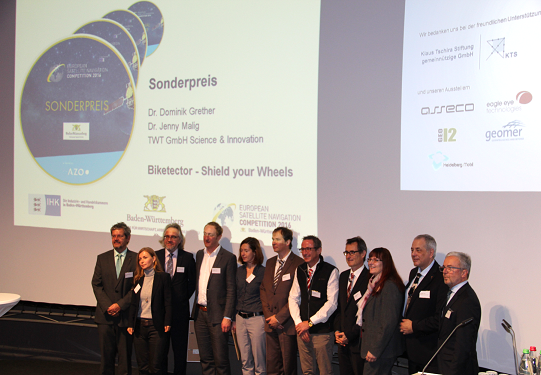 We highly appreciate the support for our SAP Next-Gen Bike project and are keen to revive MRN’s pioneering role in respect of mobility and transportation.