How can you show the value of SAP Screen Personas to business? 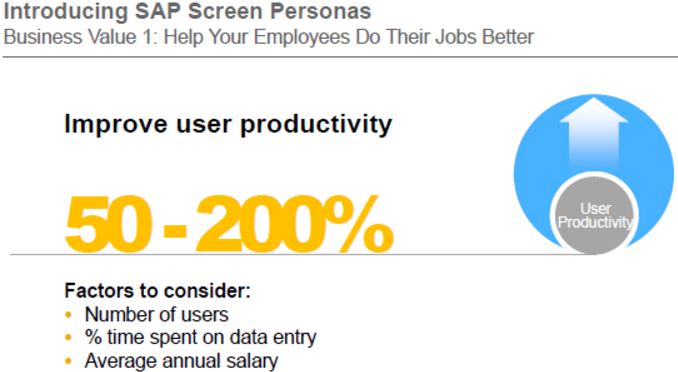 In the workplace, UX is about making people more productive and motivated at the same time

Have you already noted what SAP Screen Personas is capable of doing to increase the performance of your company, even if you are already using Fiori? Or, even better, if you still aren’t?

Recently, Fiori and SAPUI5 has been receiving well deserved attention, partly because of the new paradigm of making processes ready for mobile first access.

But, at the same time, if we look inside of lots of companies there are dozens or even hundreds of processes that are still performed on desktops or notebooks and are meant to stay this way for a while. If you look inside your company you’re certainly going to find such scenarios: they are on internal sales departments, master data management teams, stock management and financial support services, among others.

Obviously I’m talking here about the many scenarios where SAP haven’t delivered the new Fiori experience, and there are still lots of examples of that. In fact, I believe that a large part of the more than 400.000 SAP GUI screens won’t have a Fiori app anytime. Also there are all the customized “Z” scenarios that certainly aren’t to be upgraded to the Fiori experience.

For these scenarios you don’t need to let users chained to the old fashioned standard SAP GUI screens. We all know SAP GUI screens don’t have the best usability and that they are not known for their simplicity, neither are mostly liked by users. We also know that users surely use them because they need, but they would be much motivated and way more productive if they had a smarter, simplified, faster and better experience to enable them to have their work done.

So let’s see how you should begin.

With SAP Screen Personas you have a simple to use tool to create enormous changes to your users experiences and, at the same, time you greatly increase their overall work performance!

The idea of selling Screen Personas inside your company is directly tied to showing to the right people where its greatest value is. In a broader sense, the mostly positively impacted groups are the business users and business managers, because they will see their teams work performance getting significantly better instantly. IT management sometimes doesn’t see the real value of UX initiatives at first, specially if they are not already aware of the impact of having a better UX on their enterprise software. But they  will surely notice and support your initiatives as soon as business users and their managers begin to ask for more scenarios being made available through Screen Personas.

So, this is my recommended approach: at first, identify inside your company who are the business leaders whose teams spend lots of time to do any kind of daily repetitive work and prototype a solution for one of these processes. Begin by the most relevant business case, the one process that is repeated more times by more people daily. If you do that, you’ll see instantly buy-in, trust me. In fact, when I did it in the past, I saw people asking me why they were not using it yet!

Secondly, after you’re done with the initial scenario, ask the users to show it and talk about it with their colleagues on other areas of your company. This will soon generate more demand and scenarios are going to pop from every corner.

That’s simple: go on and give the very first step. As I’ve already written in another blog, it’s very easy to setup Screen Personas, if you haven’t done it yet. Just ask your basis team and they will do it in less than one hour (given your SAP software is updated enough).

Once Screen Personas is installed you can do a mockup or prototype in a few hours. Yes, it’s possible to use Screen Personas as a prototyping tool so your audience has the feeling of the real thing in a real short time. It will give you the needed support to go ahead.

Now, just pick the proven ideas I’ve laid out here, put it to work and invite your business users to see it. Make sure that the business leadership sees it, so you will have increased interest and more support to make it a reality. Let me know if you need some help or ideas and I’ll work with you in your path to adoption.

By doing this, you are making the life of your users easier and more productive. They will soon be demanding more and more of your newly acquired capabilities to make it happen for them.