Update: [Aug-2019] The property CloudConnectorLocationId is now replaced with the Location ID property which is now made available below the description of the destination.

There are scenarios where large organizations typically have different LoB team operating in different regions. Each department owns and maintains their backend systems and an Administrator within each of these departments would want to manage the systems and resources which are exposed to the Cloud Platform via the Cloud Connector. End users of these organizations access Apps delivered by each of these LoB teams centrally from a single account in SAP Cloud Platform. 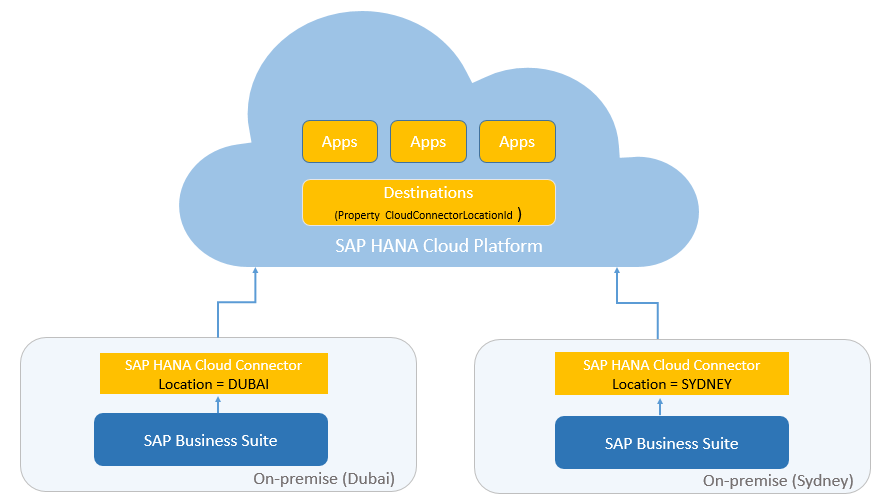 In my scenario, there are two SAP backend systems – one hosted in the customer’s Sydney data center and the other hosted in Dubai data center.

Configuring the Cloud Connector based on Location

As an administrator, when you are setting up the connection to an account, you have the option to provider the Location ID. You can provider a value here which will be used later from the Cloud Platform.

In the below screen, I am working on a Cloud Connector which is physically installed in the Dubai data center. Hence, when establishing a connection to the SAP Cloud Platform account, I have provided a Location ID “DUBAI”.

For this Cloud connector, I have configured a backed system with a virtual name U1Y (which also exists in the same data center, ie Dubai) and exposed the OData services under a particular path.

Similarly, I have setup another Cloud Connector which is physically installed in the Sydney data center. While establishing a connection to the SAP Cloud Platform account, I have provided a Location ID “SYDNEY”.

For this Cloud Connector, I have configured a backend system with a virtual name QHD (which also exists in same data center) and exposed the OData services under a particular path.

Configuring the Destinations in the Cloud Platform

Now that the Cloud Connectors have been configured based on the Location IDs, the next step is to create destinations in the SAP Cloud Platform. There is a new property called “CloudConnectorLocationId” which has been introduced as of Cloud Connector version 2.9.0.

The value of this property defines the Location ID identifying the relevant Cloud Connector over which the connection shall be opened.

If a value is not maintained for this property, the system will try an open a connection with another connected Cloud Connector for which there is no Location ID maintained.

In the below screenshots, I have showed how the destination is setup for each of the two systems which are available in different Cloud Connectors. Notice that I have created a destination for QHD for which I have maintained a property CloudConnectorLocationId = SYDNEY.

Similarly, for the destination created to access U1Y system, I have maintained a property CloudConnectorLocationId = DUBAI.

With this configuration, I would be able to create Apps on the cloud platform which refer to these destinations and the service calls would get routed to the relevant backend systems managed by the respective cloud connectors.

Thanks for the blog, it solved my issue.

More info about the new release of the SAP HANA Cloud Connector can be found here:

Great Blog as always Murali. Would be good to also know how to use the destinations dynamically in an app (UI5, Java, etc.). And in HCI as well.

Thanks Parag. I have not tried using dynamic destinations. I think we could maintain multiple destinations in the neo-app file and dynamically use them based on parameters passed while calling the application. May be you could post this as a question to see if others have some idea.

hi there, this is a great post, but i have a vice versa situation. Is it possible if we have one BW on HANA instance with SAP Cloud Connector installed on the apps server, then multiple SAC tenant connects to it ? so for example, this large enterprise company has centralized Data Warehouse located in Singapore using BW on HANA. Then this company has 5 subsidiaries that are located on different countries that need to be connected to the BWonHANA instance. the idea is that all those 5 subsidiaries will subscribe to a different SAC tenant and connects to only 1 SCC. Is this possible ? i need those 5 subaccount in 1 SCC to be concurrently connected to BW on HANA.