Mockito is a mocking framework, JAVA-based library that is used for effective unit testing of JAVA applications. In our unit test there are usually some dependency on other external service implementation for example network or database service. Usually in order to isolate our test code from these dependencies we have to create mock class against them. Mockito in Java can create transient mock class ( which is only available in current test session ) for us in a very easy way. See one example below:
This is a very simple class for book manager. Three books are hard coded. If requested book index is bigger than 3, then message 1 “not exist” returns.
In this blog, I will first introduce how Mockito is used in Java to mock this manager class, then show you how the logic of Mockito could be implemented in ABAP.
Use Mockito in Java
The magic is located in line 18 ~ 23.
First in line 18 a proxy class is generated based on BookManager which is to be mocked, then line 20~23 we told the Mockito “when the method getBook with specified argument ( 0, 1, 2, 3 ) are called, please return given mocked data “mocked book {index}” accordingly.

And no doubt we can get the following output in console:
How does it work in Java
Now let me unveil the mistery for you. In order to make the logic better understood, I split the one line
into the following equivalence：

The generated class is a sub class of BookManager created via CGLIB, which I have already demonstrate how to implement it in ABAP in this blog:

Step2: mockedManager.getBook(0):
Since we call getBook on the mocked class, the original implementation of this method can never be called again. When you click F5 to debug into this method,
you can find the method call of getBook is intercepted into Mockito framework code:

Inside handler.handle(invocation) in line 47, first an instance of OngoingStubbingImpl is created for later usage.
In line 93, Mockito will check whether there is available mocked data ( In Mockito the terminology for “mocked data” is “answer” ) for current metod call in method findAnswerFor. If available, go to IF branch in line 97 to return mocked data, or else return default answer, in my example I don’t prepare any mocked data for getBook, so it simply returns null.

The logic of this step could be described in the following activity diagram: 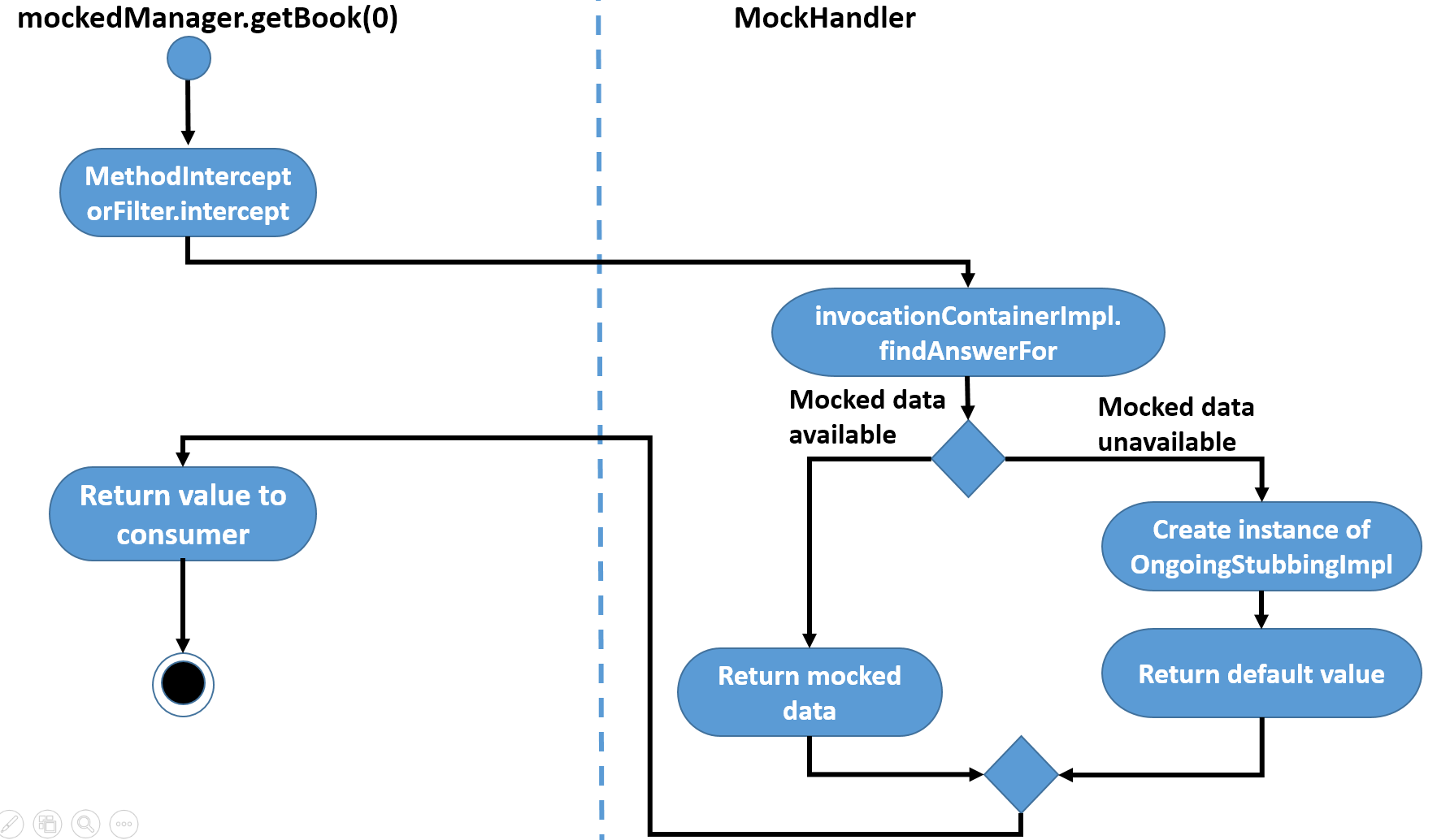 Now the mocked data is ready for consuming in line
Since all the previous four steps for mock are done, we expect this time, the findAnswerfor will really return something.

Inside this method, each element in the queue is looped to evaluate whether it matches the mocked method call:

The evaluation is done based on three conditions: mocked class instance must be equal, method name and argument must be equal.

finally mocked data is returned for getBook in this IF branch.

How to simulate Mockito in ABAP
First this is the book manager class written in ABAP:
And this is the report to test:
Execution result:

Still I will explain how the mock is done in ABAP via the same four steps as in Java Mockito.
Step1: Create a transient sub class dynamically via ABAP call:
The implementation has already been explained in this blog: Implement CGLIB in ABAP
Step2:
When the get_book is executed, of course the original implementation will never be called again. Instead, the mocked class will delegate this call to Mockito framework method zcl_abap_mockito=>get_mocked_data

In zcl_abap_mockito=>get_mocked_data, just the same as Java, there is a IF branch:

Step3: call method when to return the instance which is the counterpart for “OngoingStubbingImpl” in Java.
Step4: call method then_return( ‘Data 1’ ) to feed mocked data for get_book method.
The source code of zcl_abap_mockito could be found from my github.

Thanks for this! One question that came up for me is how does ZCL_ABAP_MOCKITO relate to the SAP standard CL_ABAP_TESTDOUBLE framework? As far as I know it is currently still limited to only be able to mock interfaces and not classes directly but otherwise fits in the same role.

Thanks a lot for your notification. Yes you are right that the mock class generated by CL_ABAP_TESTDOUBLE is based on global interface while the idea in Java Mockito is based on inheriting from a non-final class.

I recall some years ago when Uwe Kunath created the open source project MOCKA to  achieve something very similar to what you are describing in this blog.

That has been largely superseded  by the new standard SAP framework, but it can handle mocking a class as opposed to an interface. Since I reckon SAP based their test double framework on MOCKA I would not be shocked if in the next release it handles mocking classes as well.

An innovative way to work on unit testing . Can't wait to try this out.