In i think it was end of october i´ve noticed about #sitWDF, at this point i decided to participate on my first SAP inside track. Especially after i get notice the the main topic is IoT where i played around since 2 years and one of my current main topics at my employee sycor.

Another aspect was that i follow a lot of other SIT´s via twitter and i see how important it is to get in touch with the SAP community crowd. Some weeks later i get notice about the additional SAP Learn and Hackday as a pre event and futhermore at the #sitKids. At this point i was facinated about this event and i send a mail to get the approval from my boss.

To share the possibilty to learn and get in touch with others, i invited 3 colleagues to attend the learn, play and Hackday as well.
At this point we have define our litte team ;o) to drive a little innovation and learn new stuff.

At thursday we start our trip to walldorf, some hours later we just arrived our hotel and we decide us to taste the “badener” beerculture ;o) 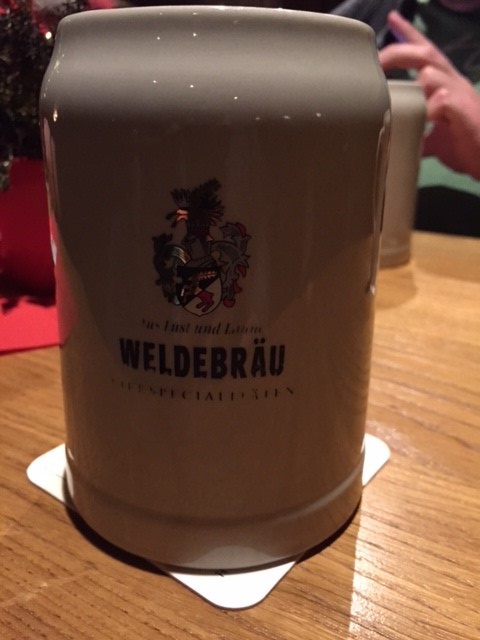 After the breakfast we walk to SAP, the first thing what i´ve seen was the reception with Katarina, Svea, Former Member, Jonas and Jitendra and i must say it was a really warm welcome.

We get our batch, sticker and for me the t-shirt for the #sitKids .

As we arrived the main room S3 i take a coffee and the party can be start and it was a casual atmosphere….fantastic. Katrin and Daniel give a short intro and ask if everyone has ideas for some IoT related projects for today. 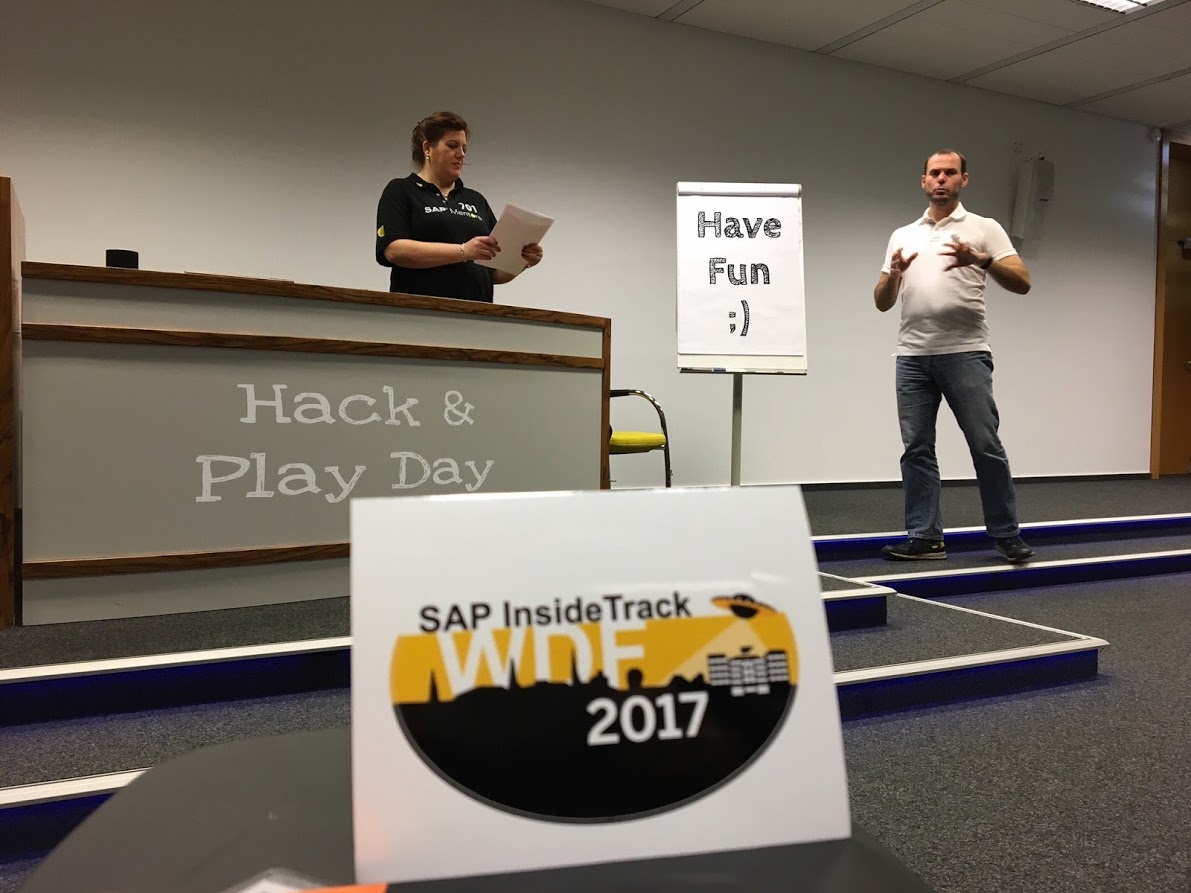 Some minutes later more and more people present their project ideas which they plan to realize and build up the different heads of the group. 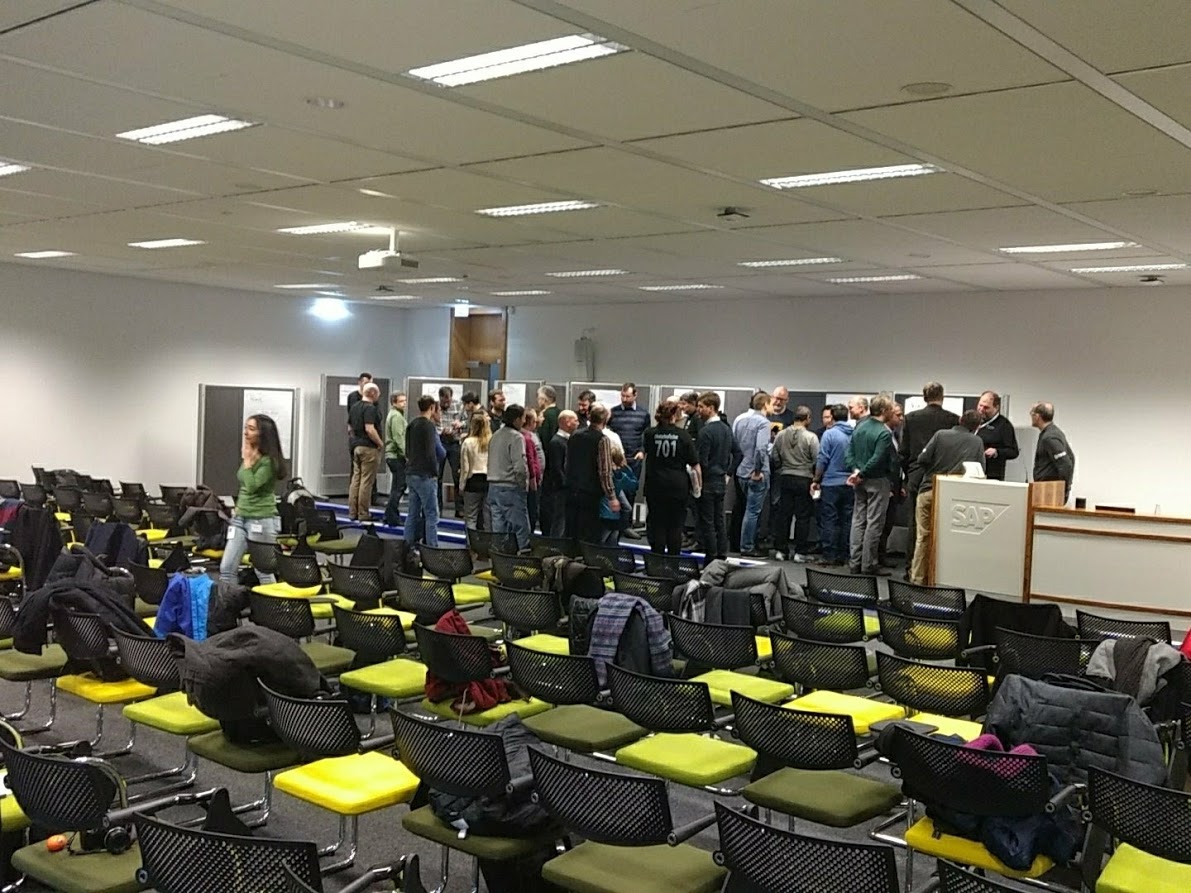 My first idea was after Witalij shows us some IoT stuff an especially the LoRa based, to work with this. But in fact that no LoRa network are present i join the “Fitbit” group.

After all groups are ready and filled up with peoples we take our IoT stuff (Fitbit´s and some Drone´s for us). The idea of our group was to control a drone, based on the heartbeat which are measured from the Fitbit. Funny idea but not so simple as i think in the morning.

Every groups are splitted in different groups an go ahead to work whit the IoT stuff, it was really nice experience to get started with our little project with peolple which u never known before but it works perfect. One funny aspect was we starting to talk together in english and after 10 minutes we realized all of us are also able to speal german, so we switch to german. We decided to divide our group in three parts, the Fitbit, the SAP IoT and the Drone.

My part was because i love to do some technical IoT, integartion stuff to setup the SAP HCP IoT Services. Additional i develop an easy Iflow on SAP HCP, integration service to fetch the data from the Fitbit API. At this moment we are not sure if Fitbit is able to send data to SAP IoT Services.

Few hours later some from our group take place at the “Business Sketching” session. For me a really great expierence to learn how we can visulaize our story in a simple way. The first thing was to write some letters in a predefined line sheet. 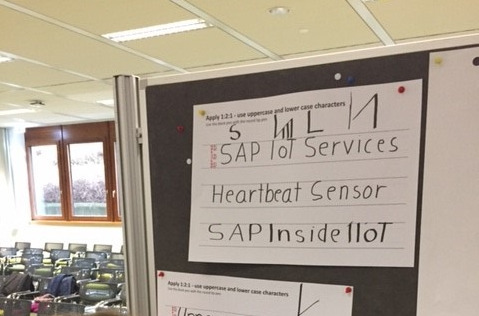 From my perspective it was not so easy as i thought at the beginning. The next step was to visualize our story in an A4 format, we got here a really good support by Tatjana .

Our final visualization are finished after 10/15 minutes and has now a clear view of our scenario. 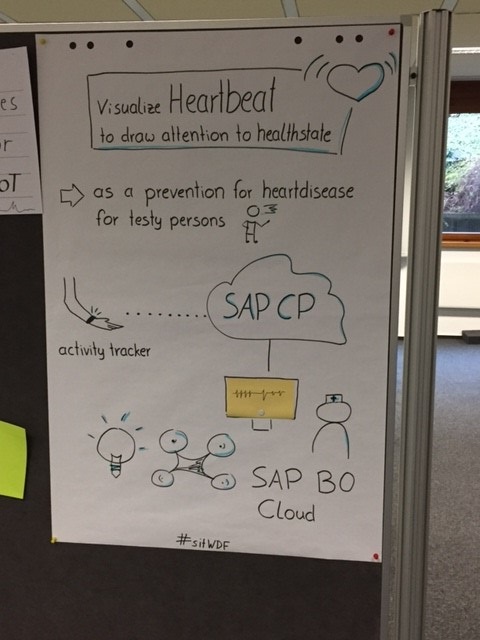 After this session we go back and go ahead with our scenarion to finalize the “Fitbit_to_SAP IoT_Drone” integration.

In the afternoon Former Member give us a good intro about SAP´s IoT portfolio, startegy and vison.

That was my stuff ;o) 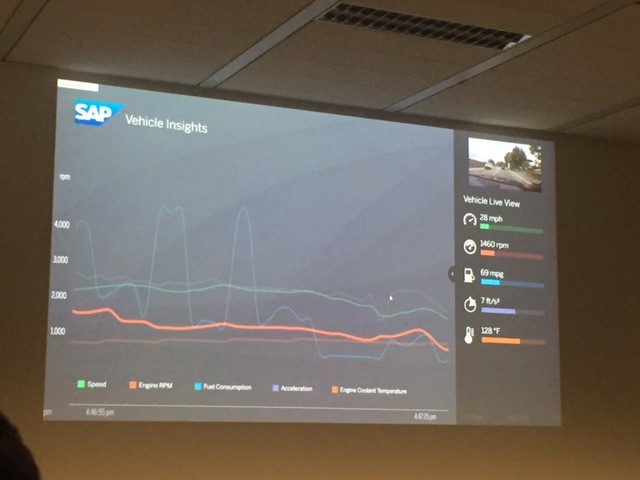 Futhermore she present us a demo of SAP Vehicle Insight and overview about the new introduced SAP Leornardo: 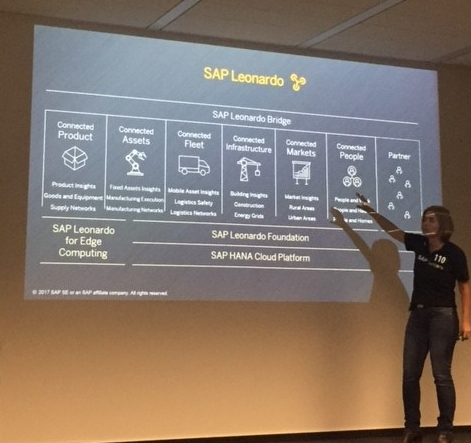 At the end of the session we got the apportnutty to drink a glas sparkling wine together and to present our results about our small IoT projects. And i must admit there was a lot if great results in such a short time frame.

Unfortunately our sceanrio was not successfully finished, becaus of some technical and time based limitations. Each componetent, the Fitbit, SAP HCI with SAP IoT Services and the drone works but even not connected. But i think the main focus was to work together, get insights and have fun. This we have definitly.

In the evening an BBQ sponored by SAP Mentors (thx for that) take place in the SAP clubhouse. We now switch over to the relaxed part of the day. Really cool to talk to many different people from different countries.

My personal best talk on this evening was the conversation with Christian about different SAP relevant topics great, nice to meet you. After some drinks later the BBQ ends, because the next day with sitWDF and sitKids take place and we want to get fresh for this.

My summary for this day was, yeah a great and impressive first day. We need more of such events to grow up the community to get more insights and ideas from different people to go ahead with innovations.

For me, i decide to visit more SAP community events like SAP Inside Tracks, so next stop ist sitHVR and sitFRA!!!