So far, we created a custom business object “Bonus Plan” with simple data structure, initialization and check logic and application UI. This business object is there to save employee specific rules for bonus entitlement.

Task: Create your Custom Code List to be used in your custom Business Object

Example: A code list for release status shall be used in Bonus Plan to reflect if a Bonus Plan is still under work or ready for use.

Having completed all preceding parts of SAP S/4HANA Extensibility Tutorial.

3. Start Creation process of a Code List by clicking the “New” action. 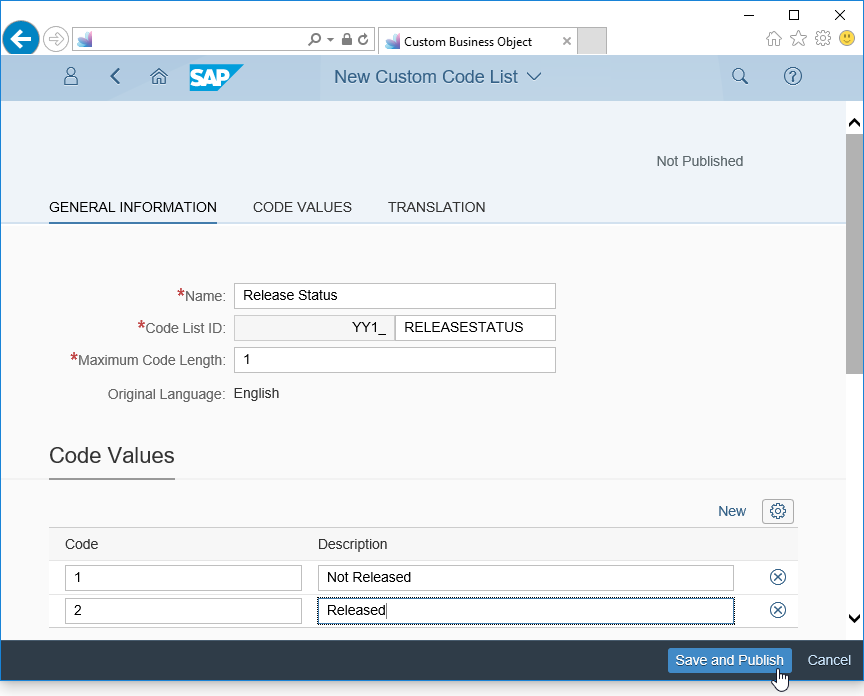 5. Execute action “Save and Publish”

To make use of this new code list, you first have to add it to the structure of the Bonus Plan Business Object.

8. In the Code List field start typing yy1_releasestatus until the value help offers the right name to choose easily.

9. Go back inside the application and publish the Bonus Plan definition.

After having added it to the Business Object structure, also the business logic has to deal with it.
In the After Modification Event we want to find out if end user just set the bonus plan to “Released” and ensure that bonus plan’s consistency allows to leave this end user change.

2. Open Before Save Event in Validation Logic.

4. Implement following functionality:
Save rejection shall no longer be dependent on consistency but on release status.
Hint: Exporting parameter valid must be set to true for save and to false for save rejection

2. Open the Bonus Plan, created in Part I tutorial

5. Save the Bonus Plan. Save succeeds, but brings Warning due to missing Target Amount.

8. Save the Bonus Plan. Save fails due to release status change while having the inconsistency of a missing target amount.

10. Save the Bonus Plan. Save succeeds.

Very informative F4 help .But Since i am creating tables with standard fields.

Note: From S4HC 2011 release, the "Custom Code List" tab has been moved to "Custom Reuseable Elements" App, instead of "Custom Business Objects" App.