I’m happy to announce that the very first Member of the Month for 2017 is Jerry Wang, an SAP colleague from SAP Labs Chengdu.

Once a year, we award the Member of the Month honor to an SAP employee — someone whose community involvement goes above and beyond normal day-to-day job responsibilities. Jerry is an obvious choice. Several community moderators nominated him, and looking at his profile, it’s easy to see why. 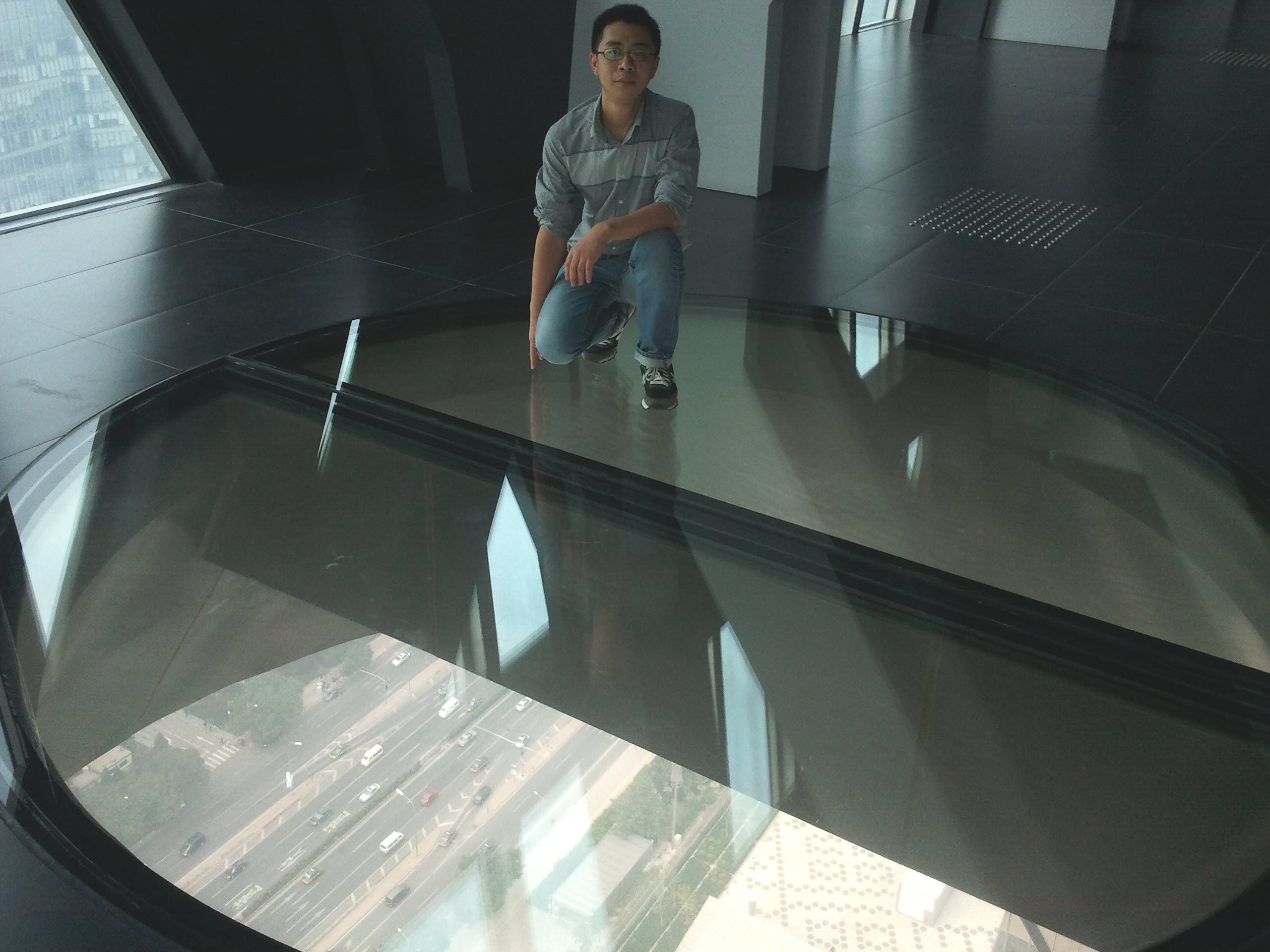 Jerry, standing on a glass floor 200 meters above the ground (at China’s biggest TV station)

Jerry’s track record speaks for itself. A member for roughly a decade, he has published nearly 370 blogs — and boasts almost the same number of followers. Clearly he contributes a great deal, and community members value his expertise.

I could go on and on about Jerry, but at this point, I’m sure this Jerry should shut up and let Jerry Wang do the talking.

So…congratulations, sir! Would you mind telling us a bit about your career at SAP? When did you join and what do you do for the company?

I joined SAP Labs Chengdu in January 2007 after I graduated from university with a master’s degree in computer science. My first job was working on SAP Business ByDesign as an associate application developer, responsible for design and implementation of customer extensibility, which ranges from simple field extension to complex process extension.

In 2012, after a reorganization, I transferred to the CRM on-premise development team and was mainly responsible for CRM master data development, including product/individual object, IBASE, middleware, and some other reuse components like attachment and document builder in CRM. Meanwhile in this year I also participated in an Android application development (Customer Briefing in CRM) and successfully released this application to market finally.

In 2013, I was working on a social-media project in CRM Interaction Center, which integrates Twitter and Facebook into IC Agent inbox.

In 2014, I quit from standard application development temporarily and concentrated on customer support, including all kinds of deal support, POC development, escalation handling, et cetera. I have delivered many on-site and remote support to customers. 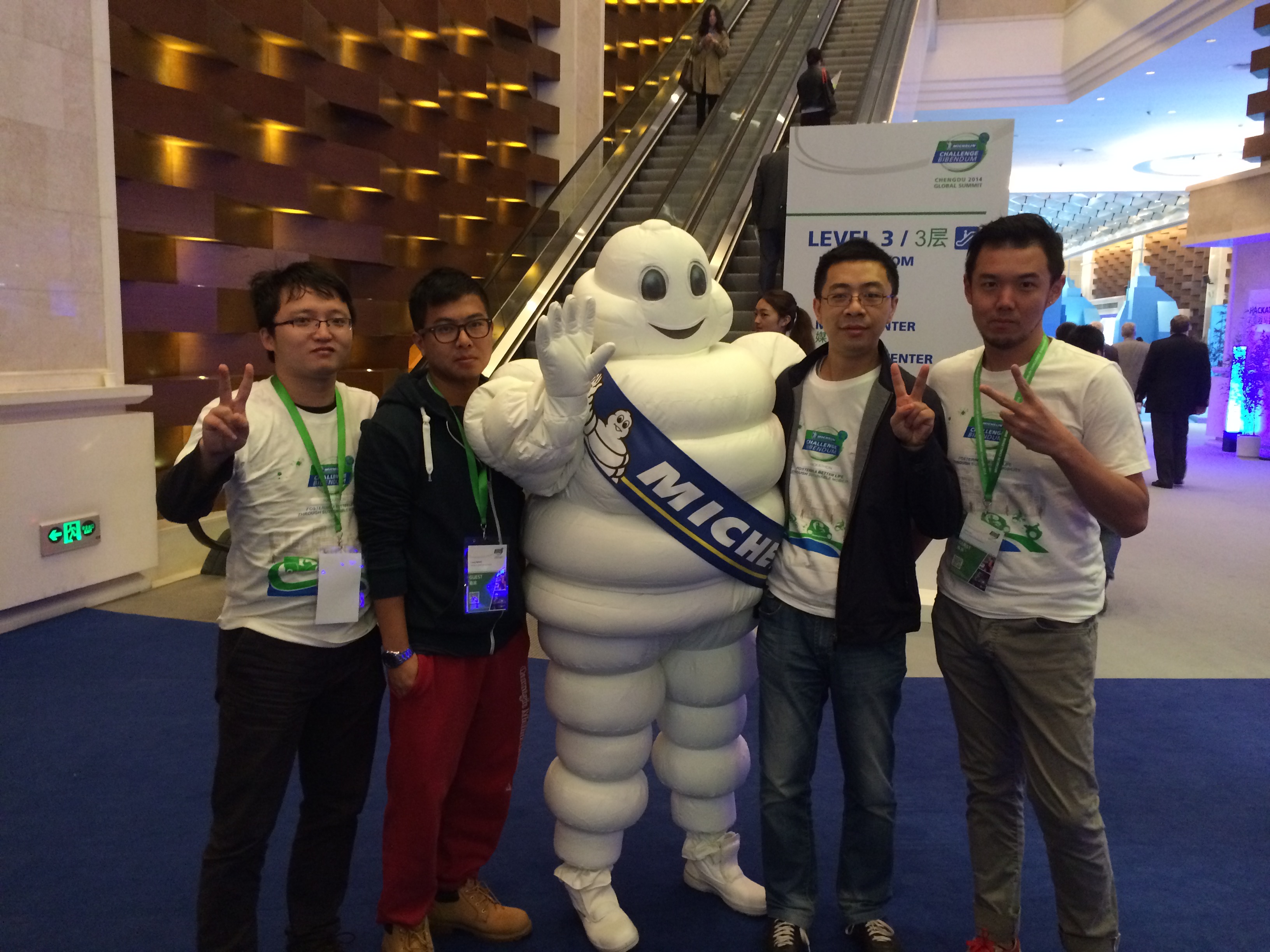 Per your profile description, you’re an experienced application developer with professional programming skill in ABAP, Java, and Javascript. Could you tell me a little bit about how you developed knowledge in these fields?

Before I joined SAP, my research in university focused on high performance and resilient P2P content delivery network using C++, so I knew nothing about ABAP, I never even heard of this language at all. I still remembered struggling in 2007 when I could not avoid to write C++ style’s ABAP program. Fortunately enough within SAP there would never be a lack of ABAP veterans, and all of them are always ready to answer questions. Here I would like to say special thanks to my colleague Sergio Rozenszajn, who had provided me lots of help in 2007. At that time we are working on the same project with different sites. I always had lots of question regarding ABAP and some of which were really not relevant with current project. I asked Sergio those questions via Microsoft Messenger or directly called him and I could always get answers from him. Later as time went by, I found in NetWeaver you can almost debug everything you want to know, just by simply pressing “/h” in SAPGUI. So my self-study started with that press — much of my knowledge has been gained via debugging in the system.

And when talking about Java, I don’t have too much work experience using this language — only 1 year’s internal tool development for daily work efficiency improvement and 1 year’s Android development. However, I have many friends in my office who are working on a Java project, so I can get the latest information from them via their wikis and share folders to know what they are developing every day. With SAP corporate GitHub I can clone their source code in my spare time, make adaptations, and test by myself. I don’t think I will continue to program with ABAP until I retire. There is a quote from Benjamin Franklin: By failing to prepare, you are preparing to fail. I study hard to be well prepared for the future Java development.

And for JavaScript, it is an amazing language which is easy to learn but hard to be a master of. It is a must to work in Fiori development and meanwhile, there are tremendous JavaScript repositories in GitHub. It is very easy for a developer to find one, fork it, and start coding — to improve his or her JavaScript skills.

I’m a writer, and math isn’t my strength, but I did some estimations. You’ve been part of the community for approximately 10 years. That works out to 120 months. As of this interview, you had nearly 370 blogs. So…that means you’ve averaged about three blog posts per month since 2007. Looking at your profile more closely, I’ve seen weeks where you’ve published blogs every day for nearly a week — and even published multiple blogs on the same day. To call you a prolific blogger would do you a disservice. So I guess what I’m asking is…how do you do it?

First, I never deliberately spend time to consider what content I should blog — my daily work always inspires me to do that, especially when I move to a completely new area. For example when I moved from traditional CRM WebUI technology to comparably more flexible UI5 technology, from traditional ABAP DDIC to ABAP CDS view, I always find out there is much for me to learn. My blogs are normally not talking about some overview concept but focus on concrete stuff.

For example, I encounter some error message as a showstopper. How do I find the root cause and fix it by myself via debugging? Or something works as everyone expects, but completely transparent to developers like a black box. I usually cannot suppress my curiosity to try to figure out what has happened under the hood.

And how can I find enough time to write them down? Well I have a “TO WRITE” list which contains all topics I would like to blog. I live 20 kilometers away from the office and each day it takes me an hour to go to the office by metro. It means every day I have two hours which I have 100% ownership and can not be disturbed by others. I have installed one Android app “WizNote” which works exactly the same as Evernote but was developed by a company in China. During these two hours every day, I can write draft blogs in metro via mobile phone. And when I have free time, all I need to do is to synchronize the blog into PC, copy and paste it into SAP Community, add some screenshots and small style adaptation, click the publish button, and that’s all. In metro, my writing can’t be interrupted by my family or colleagues, so it can be done in a very efficient way.

OK, so that’s how you do it. A better question might be: Why do you do it? And why did you decide to start doing it?

Before I started to blog in SAP Community, I already wrote content in corporate wiki. My manager, Poseidon Wu, read those wiki entries and encouraged me to post to community instead, so that guys outside SAP can also read them.

At first, I blogged a few and received very positive feedback, which has helped me to keep this blogging habit. Meanwhile, I also received some comments that pointed out the mistakes or obscurity in the blog, which helped me to refine my learning on the involved topic. I really appreciate those readers’ time and effort to do that.

Over the years, I also benefited a lot from SAP community. I think it is my obligation to contribute to it, once I am qualified to do that.

At this point, I normally ask Member of the Month winners what they do in their spare time. I’m guessing you use your spare time for writing! But is there anything you like to do — hobbies or something else — outside of the office when you’re not blogging?

Recently I fell in love with swimming. Unfortunately compared with my programming skills, I swim really poor. Nevertheless I will keep practicing for improvement. Besides that I managed to use nunchaku. (We Chinese people prefer to call it “chainstick.”)

I’ve sent you a photo of my nunchakus. The first one on the left is made of sponge, so it is very light and proper for learning some dangerous actions — for example, those with the head involved. The second one is made of wood, which is heavier than the sponge one but still lighter than the other two, which are made of steel. I prefer to use the steel ones, since they are more stable, which means easier to use, but if your skill is not good enough to control the rotation of the steel sticks, sometimes they will unexpectedly hit you and it really hurts.

And why I would like to learn it? There is a very popular rap song in China — “Nunchucks” by my favorite singer Jay Chou. Just have a look at the music video. I think after that you will love it too. 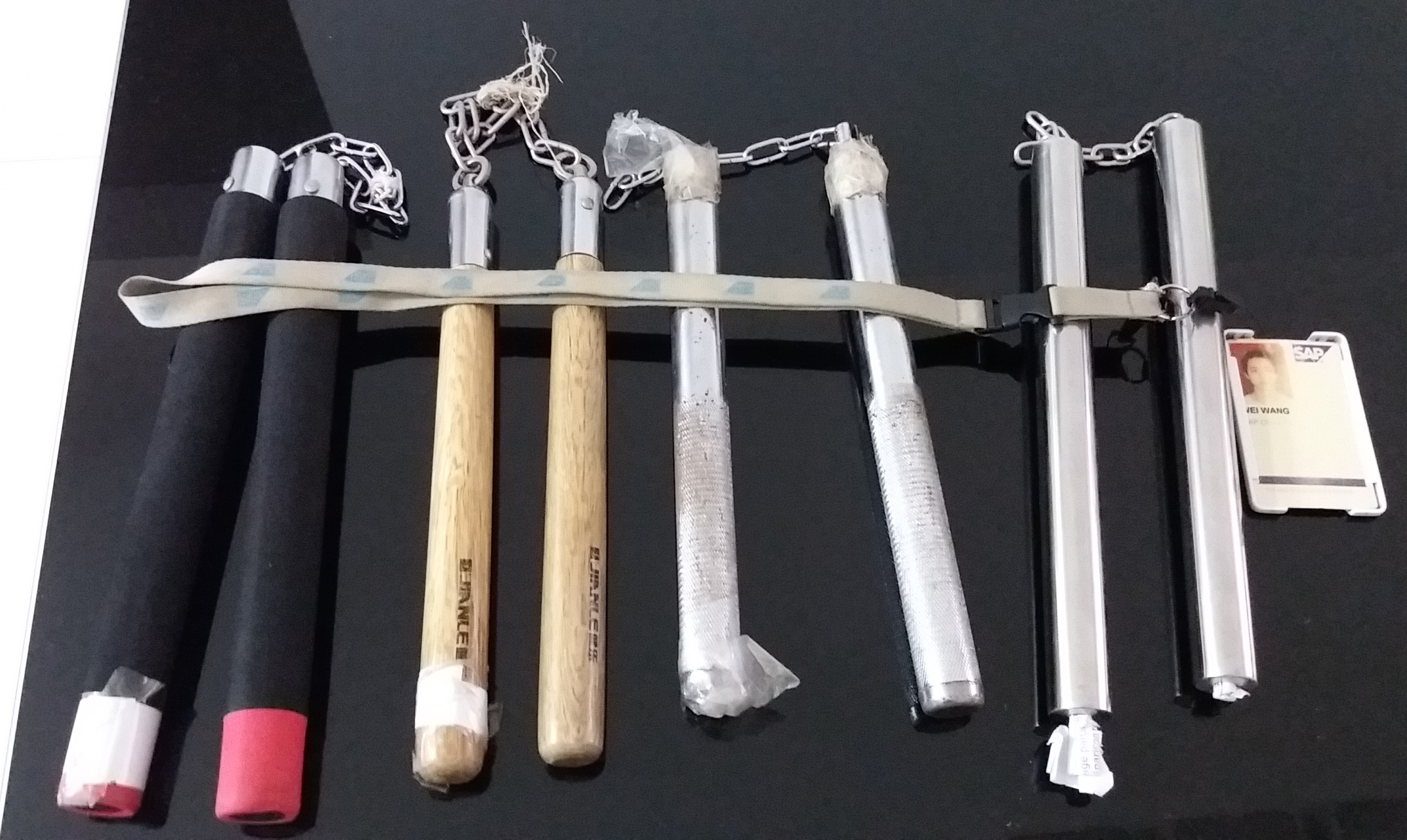 Jerry’s practice nunchukas (i.e., “chainsticks”), as described in his response above

I think more members might like to write blog posts, but they’re probably nervous. Any advice for them about how to get started?

My advice is: Just blog it. I have discussed this topic with some new colleagues who just graduated from university. Their biggest concern is: “Suppose I wrote a blog with content which seems quite plain, then members in SAP Community will consider it is not worth blogging at all and will laugh at me.” My reply to such concern is, in my opinion, it will never happen.

My suggestion for members who would like to start their first post is: first concentrate on a dedicated issue or error message encountered in your daily work, and follow this pattern: Detail the issue and describe the error message. Then explain how you analyzed the issue and describe your troubleshooting in detail. Share how you found the solution. Last, consider whether the knowledge gained via this troubleshooting is generic enough to be applied in some other scenario.

In my opinion, as long as you really spend time and effort, every member in community will appreciate it. Even if there might be some doubt in the comment, you should never treat it as a negative sign. Instead, it is a hint that you might not have 100% mastered the topic you posted about, which encourages you to review your post and makes your understanding even more thorough.

Great stuff, Jerry. Once again — congratulations! Thanks for talking to me. Now I’ll let you get back to work…and back to blogging!