In the previous post I showed the complete end-to-end scenario of using synonyms in XS Advanced. In this post I will show, how more flexibility can be achieved.

The flexibility options do not really depend on whether accessing a classical schema or a generated HDI Container. Everything that is different was explained in the previous post. I will therefore only use a classical schema OR an HDI container as target, not both. And I will focus on the things that are different with flexible synonym targets.

For the examples in this chapter I will use repo https://github.com/CGilde/syn-prov-classic (see previous post) as target. This is a classical DB schema.

When the target schema of a synonym is not known during design time or if you want to be able to easily switch to another schema as target, we need a mechanism to replace some symbolic or default schema by a concrete schema during deployment. Configuration files and a templating mechanism provide the required functionality. Configuration files also provide the functionality to change the targets of synonyms at a central place.

Since I do not want to hard-code the target objects in the .hdbsynonym files anymore, I remove the targets from those files. What remains can be seen as “declaration only” of a synonym, without defining any specific target:

and after removing target information:

Now I move the information about the target objects into an .hdbsynonymconfig file. Those configuration files have to be located in a folder cfg, which must be a subfolder of the db module’s root folder. The cfg folder can contain subfolders to reflect the project structure. The location of the .hdbsynonym files remain unchanged.

The syntax of the .hdbsynonymconfig file is almost identical to the .hdbsynonym file, but allows to use “schema.configure”, followed by “<service_name>/schema” instead of a fixed schema name. During deployment (or build in Web IDE) the schema will then be replaced by the actual schema of the referenced service. This means, that we do not have to know the schema we are referencing in advance!

During deployment the cfg folder is scanned recursively for all synonym configurations found. Those define the targets of the synonyms (or replace an existing default configuration).

For compatibility reasons with older versions, there is also the possibility to use an .hdbsynonymtemplate file. An example for synonym SNWD_SO_SL is included in project repo.

Before building the project, I  copy the .hdiconfig file from the src folder to the cfg folder, in case it is not already there.

I build the project in the Web IDE and check the synonyms in the DB Explorer. The schema name is EPM_DEV, even though we did not mention it explicitly anywhere in the project:

If we want to deploy the project to another system or another space, all we have to do is create a service “EPM_XXX-table-grantor” via “xs cups” in that system and space, pointing to the schema we want to access. Accessing another HDI Container works the same way. A HDI Container with the same service name we use in our project has to be available in the target organization/space of the deployment.

Sometimes it is not wanted or not possible to create a grantor service with the name used in the development descriptor mta.yaml and the other files, like .hdbsynonymconfig or .hdbgrants files. Instead, an existing service shall be used, either in the Web IDE or during deployment. In order to support such use cases, a service replacement mechanism is offered. This feature is available starting with HANA 2.0 SPS0. To use this mechanism, we have to adapt the files using the service names and mta.yaml file of our project slightly.

For the examples in this chapter I will use repo  https://github.com/CGilde/syn-prov-hdi as target for the synonymy. This is a HDI Container containing some tables.

First, I move the information about the target objects into an .hdbsynonymconfig file in a cfg folder. This is identical as in the previous chapter and I will not explain it further. 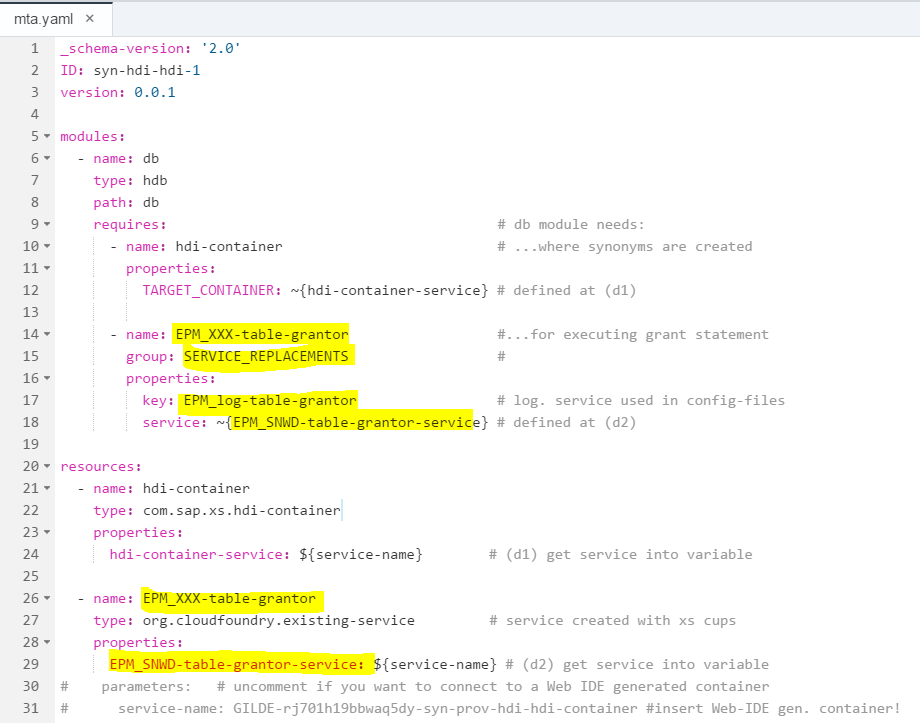 This gives us a lot of flexibility. I will show three different use cases.

An example is a deployed HDI Container containing the test data of a development system, that shall be accessed by an application during development.

For this use case, I can deploy/build the project with the mta.yaml file as shown above. Before deploying/building, I deployed the target HDI Container with the service name “EPM_XXX-table-grantor”:

After building the project within Web IDE the target of the synonyms is this generated schema:

An example is an HDI Container that is developed in parallel with an application accessing objects in this HDI Container.

For this usecase I insert the service name of the target HDI container generated by the Web IDE as parameter in the last two lines of the mta.yaml file:

changed lines of mta.yaml file, providing a fixed parameter for use in Web IDE:

After building the project within Web IDE the target of the synonyms is now a schema generated by Web IDE:

3. Targeting a service, where the name is not known before deployment

An example is promoting to production, where you do not know the names of the production services during development. 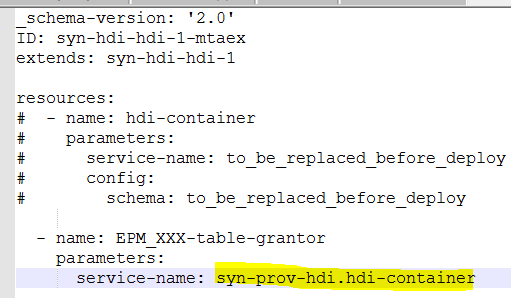 I did not want to change the service- and schema-name of the HDI Container containing the synonyms. Therefore I commented those lines in the mta extension file.

To check the deployed service with synonyms in space TST, I first have to assign my user as a developer to that space, using XSA Administration UI or XS CLI commands. Until now I was only working in space DEV.

Public synonyms can be defined from HDI using an .hdbpublicsynonym file. They should be used with special care since a public synonym can only be defined once in the whole database (singleton). Special configuration is needed to be able to create public synonyms, which can be looked up in the official documentation.

Synonyms can point to a different database container in a MDC enabled system. The synonym definition has to include the target database additionally to the target schema in this case. Configuration file templating can use “database.configure” to derive the database from a service.

I would like to draw your attention to some security aspects that are important when accessing other schemas using synonyms, without intention to cover this topic completely.

Every service in an XSA space can be accessed from any other service running in the same XSA space. Organizations and spaces are the concept that ensure, that only services can accessed, that are allowed to be accessed. This concept is not XSA specific, but originates in cloud-foundry.

If security considerations play a role during development, you should already use multiple spaces during development (available since SP12). E.g. you could create a space per project or even a space per developer. Within the XSA Admin tool you only assign the developer role to developers in those spaces that they are allowed to work in. In both, Web IDE and the HRTT (DB Browser in HANA 2.0) only those spaces can be accessed by a user, for which the user has the developer role.

When you create the services for accessing objects in other schemas via “xs cups”, you should create them very specific only for those objects you want to give access to. If you use a user with too many privileges in your services, those services could be (mis-) used to gain access to more objects than needed.

For legal reasons there is a requirement within your company, that only project “VERY SECURE” is allowed to access employee data of a classical DB schema “HR”. In principle this could be solved int the following way:

This example simplifies a little and is also not complete.

In this post I showed, how maximum flexibility regarding the target schema and service can be achieved, and how it is possible to change synonym targets at a central place. Since it cost only a very few lines of configuration in the development descriptor (mta.yaml) and an additional configuration file, I would always use this approach.

Isn’t that way too complicated to achieve such a basic task? If SAP wants to grow the XSA user community, you need to make this way simpler. This product is even more complicated than webdynpro for Java that was abandoned by the Java developer community.

I'm trying to use one unique service to provide access to several classical schemas. Also, I have modified the json of my service in the following way:

Then, in my hdbsynonymconfig, I refer the correct schema the following way

TypeError: name.replace is not a function

Is there a way to use one unique service to provide access to several classical schemas?