My very first love in sport is NOT rugby, despite the appearances.

It is basket-ball, which means to me the NBA! (I was 16 when the Dream Team made history in Barcelona) 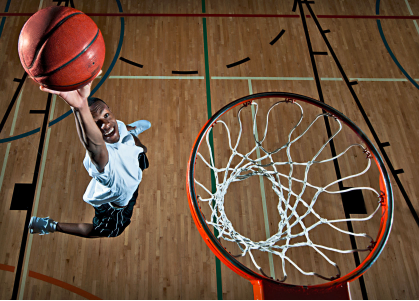 I wanted to write about basket-ball & predictive and noticed that the next event to come in the NBA season is the NBA All-Star Game.

As Wikipedia writes: “The NBA All-Star Game is a basketball exhibition game hosted annually by the National Basketball Association (NBA), matching the league’s star players from the Eastern Conference against their counterparts from the Western Conference. Each conference team consists of 12 players, making it 24 in total.”

I went to the NBA.com website and looked for the appropriate statistics. This is a nicely done website and I was able to retrieve all the player statistics from the beginning of each regular season until the All-Star begins.

Based on this source I created two data sets.

The first one is my training dataset with all the player statistics for the 2015/2016 season.
I knew  which players were selected as All-Stars whether as starters or reserves, so I added this information in the training dataset. 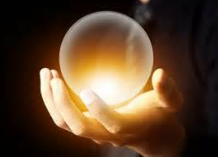 The second one is the dataset that contains the player stats for the ongoing 2016/2017 season.

I applied the predictive model I created based on the training dataset to predict the likely All-Star players.

Both data sets contains statistics like the number of games played, won, loss, the points scored as well as the different major game statistics.

In the first step I created the predictive model using SAP BusinessObjects Predictive Analytics.
All-Star is my target variable.
All the player-related information (team, age, statistics) were used as explanatory variables. 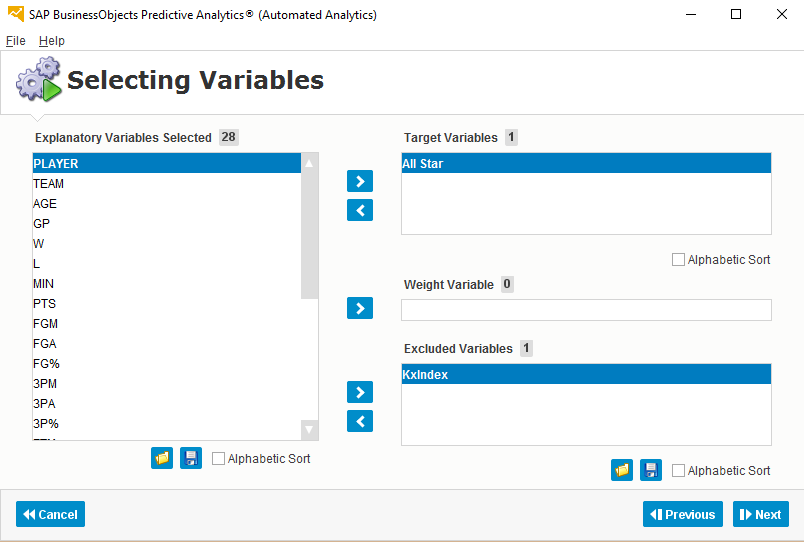 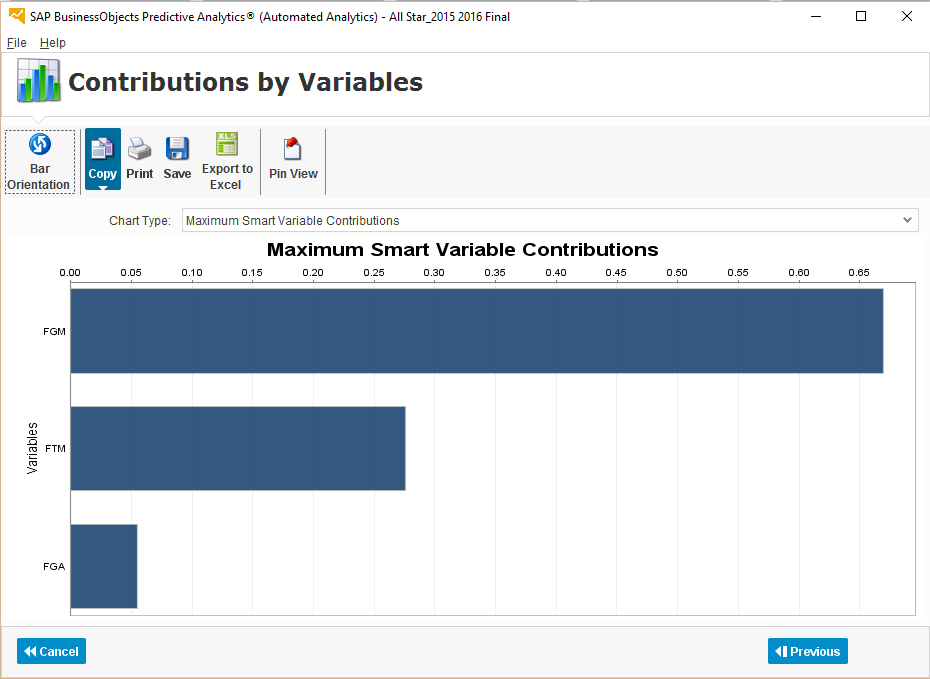 If I double-click on the FGM bar, I get to this diagram. 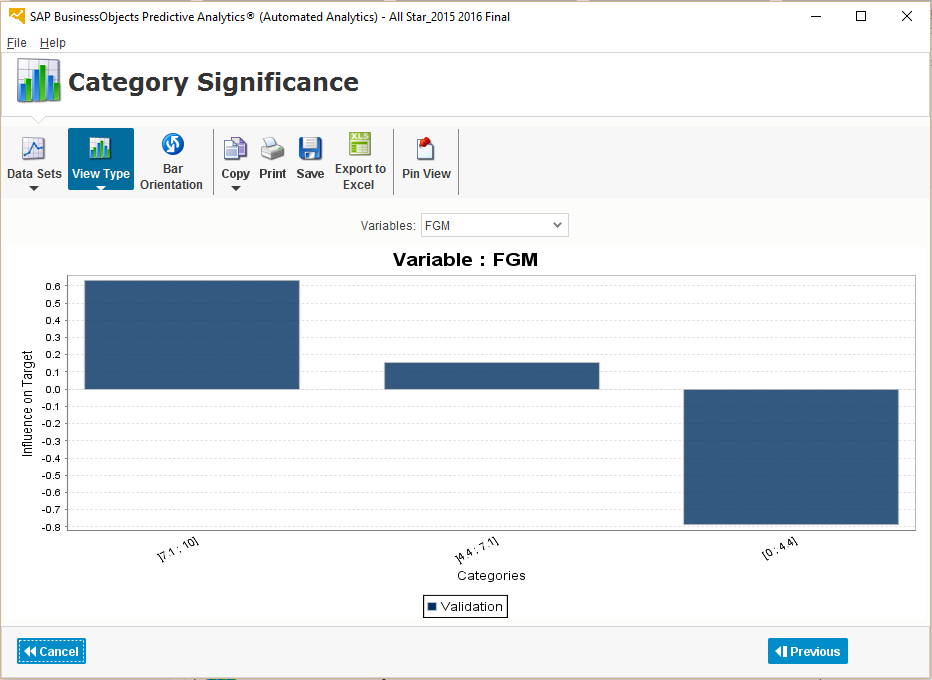 The more a category is to the left, the more it explains the output.
If I score more than 7,1 field goals per game in average, chances are I might be named an All-Star.

Once my predictive model had been created, I could apply it to predict the 2016/2017 All Stars!

I asked for the probability and output the player names. You can see the All-Star predictions sorted by decreasing probability of the player being an All-Star.

Based on these predictions, here are my starting fives for East & West.

These are my final picks based on what the solution proposed me.
I selected Harden instead of Lillard as my second guard for West as I consider that “The Beard” is a more complete player 😉

I really enjoyed writing this blog today.
I hope it illustrates how quickly & easily you can reach meaningful results with SAP BusinessObjects Predictive Analytics. 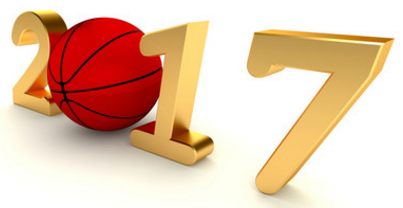 PS: You can vote for the 2017 All-Star players here.
The starting line-up for the NBA All-Star Game 2017 will be announced on January 19.

Credits are due to NBA.com to provide the relevant statistics used in this blog post.

The results were announced by the NBA, … drum rolls…see http://global.nba.com/news/nba-all-star-starters-announced/

Let’s compare the predictions & the reality!

The only exception is Kyrie Irving, that was preferred to Isaiah Thomas as the second guard, due to fan’s rank and player’s rank. I suspect the fact that he is playing for Cleveland had an impact.

It’s striking to see that the Media ranked the players exactly the same as my East predictions.

I had Stephen Curry wrong, but you can analyze he was “saved” by fans (player popularity had a huge impact here, not field statistics).

I think it’s very strange for Russell Westbrook, although I like Curry as well.

The predictions went in favor of DeMarcus Cousins, but you can see Kawhi was preferred by all parties to Cousins (Fan/Player/Media rank).

So what’s the take away for me here?

I hope you enjoy this!

Very nicely done, but I'm going to have to say that Jimmy Butler is still a guard in my book so I'll swap him out with Kevin Love. #GoCavs

Thanks Jamie!
Kevin Love is ranked #24 in my overall prediction list, so he might at least be on the bench 🙂
Tough choices 🙂

You're right, Love is out finally. 🙂

Same here, as a youth, the Barcelona 1992 Olympics ignited a passion in me for the NBA.

Why? before the tournament, I was on holiday in the south of France and i stepped into the hotel elevator … only to be faced by the man-mountain that is Patrick Ewing wearing wrap-around Oakleys. I damn near had a heart attack - I’d never seen a man that size before!

Great memories Henry - thanks for sharing this!

And now the reserves were announced. see https://en.wikipedia.org/wiki/2017_NBA_All-Star_Game. Now let's enjoy the game!

I am glad you liked it. You can refer for some details on the algorithm here: https://blogs.sap.com/2015/07/01/how-does-automated-analytics-do-it-the-magic-behind-creating-predictive-models-automatically/