The table comparison option, which can be switched on as part of a DMO migration, compares the content of table rows before and after the migration.

Basically there are two general cases how differences between the source tables and the target tables can arise:

Differences typically arise due to the following root causes:

Let us have a look at the last example in detail:

During the SUM run the source system is started manually. A user logs on to the system, creates a new user and adds a profile to this user.

If these actions are performed after the affected tables were migrated by DMO but before they are checked by the table comparison, which is executed after all tables have been copied, differences in the content of the tables will be detected. 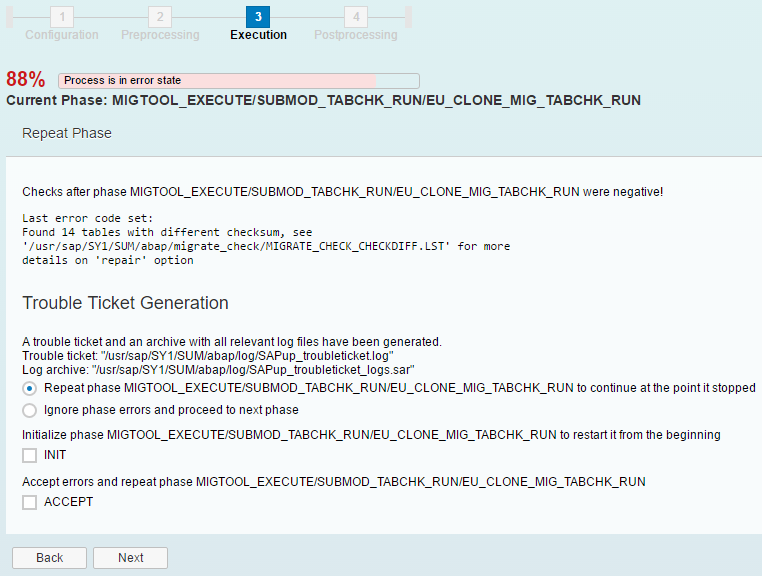 At this point we have several options to handle the checksum differences:

We can see, that the entry DDIC_TEST2 was inserted (letter I in front of the key).
Other possible letters to describe the difference are U for updated and D for deleted.

If the SUM finds more than 200 different rows in a certain table, the rest of the differences is summed up in blocks:

This is done to keep the log from becoming too verbose. When a table has more than 200 rows with different checksums, there is probably a general issue with this table and we will most likely not try to correct these differences manually.

The lines will be handled with the following logic:

In this example the tables INDX, CCMSBITHRH and USREFUS are cloned and checked again.
The table USREFUS is cloned with the special option ‘nosplit’, so it will not be splitted during the cloning procedure.

After the execution of “Accept errors and repeat phase”, the file MIGRATE_*_CHECKDIFF.LST will only contain the remaining tables with checksum errors, if any. Otherwise it will be deleted after the successful execution of the phase.
If certain tables have been excluded from the checks by adding ignchecks after the table name, they are listed in a new file *_CHECKIGN.LST.

ℹ Note:
The table comparison option is useful as a preparation step in non-productive DMO runs to reveal potential issues before a productive run.
However, comparing the table content will extend the downtime, so it is not recommended to enable table comparison for a DMO run on a productive system.
As a safeguard, DMO will in any case compare the number of rows for each table (count *) before and after the migration. This cannot be switched off.

Thank you for explanation.  We recently did DMO run on ECC EHP6 on SQL database with target as ECC EHP8 on hana. The source database size is approx . 11 TB with 8.2 TB application table data. We are using latest SUM tool and kernel executables. We choose no table comparison option.

As row count is still part of downtime, we need to understand why it took such a long time?

What can be done to avoid this long run time? Please note that there were no errors during row count or bucket failures.

We are upgrading ERP6.0 EHP7 to EHP8 and migrating database from Oracle12C to Hana 2.0 .

In execution phase ,we are facing below error could you please suggest /help me out, how to resolve it

how did u solve your problems?
having the same too.

Did you managed to go on?

Did you manage to solve the problem. We are having the same issue, Could you please suggest the approach.

First , sorry for the late response i was out

Second yes we finished out os/db migration + uc conversion , at this point i read this sap note wich might help you

2348804 - Count* replaces Table Checker for DMO use cases and how to use it for Audit Purposes.

In our case we just ignore the table and continue accepting the error cause it applied to us.

Hope you managed to go on as well

Thanks, Joan for the response.

yes we managed it by accepting the error.

We have also received the same error for row count comparison during DMO run in execution phase in file MIGRATE_DT_CHECKDIFF.LST for table PATCHHIST (source has 97 entries for this table and target has 98 entries) and got the result as below

We have compared the content of the table in both the systems and found that the target system has all the entries of PATCHHIST table as that of source system plus one extra entry for R3trans 749 Kernel. Except this entry all the entry are same for source and target system. Kindly let us know how to proceed further for this. If this can be ignored?

I too faced the issue but for row count error. you blog helped me with basic information.