Ever since I have been with SAP & in its ecosystem for more than a decade now, every SAP project would fall under any one of three categories namely, Implementation or Upgrade or else on-going Support.
With S4H the rules of the game are bit different, New Implementation, will carry the same sense. but the transition from SAP Business Suite or SAP ERP to S4H Enterprise is no more called an upgrade project. Even though in relative term one may call it as an upgrade project since it is bringing up new functionality over existing one, but from the SAP and Industrial perception, it is called as “System Conversion“. We call it as “upgrade” only when a customer patches up a new version on the same product line for e.g from S4H1610 to S4H1702.

In my earlier blogs, in Part-1, I have written how S4H is “Technically”  different from ERP.
Now in this Part 3, I would like to illustrate here on different ways to transit either from Non-SAP or SAP ERP to S4H Enterprise Management. SAP has given very clear methodology, tools, & guidelines on how to transit to S/4H.

a customer can step-in to S4H in any of the three different modes,

In a new implementation, a customer leaves their old systems behind and takes a chance to re-innovate on “Best Practices” provided by SAP a part of S4H. SAP provides simplification list along with the product to understand the ‘gap’ between new business process and their existing one. This gives a tremendous opportunity to bring up to the latest and industrial standards as part of discovery workshop (will talk about these in next blogs).

1. Non-SAP to S4H: If a customer would like to bring their Non-SAP system to S4H, then the only direction they have to travel is New Implementation. By default customer would get the opportunity to do process re-engineering and to align with SAP Best Practises leaving their legacy systems and practises behind. Moving along with SAP best practices, reaps more benefits, since SAP had examined best players in the industry and brought in these best practices. During technical upgrades, a customer doesn’t have to worry much about their business processes as SAP always keeps the downward compatibility on its version.

2.  Infrastructure Investment:  As said in Part-2 (in Part 2, I have touched upon various deployment options and comparing on-premise, HEC, HCP etc.), now that SAP has restructured its products to work on cloud platform namely HEC and HCP. From customer’s perspective, IT is no more an Assert, It is just a utility cost like electricity, Internet and water services.
Now that customers have got an opportunity to reduce their IT Infrastructure costs, it has become one of the key decision factors for New implementation on HEC or HCP versions.

3. Implementation Cost: It’s quite a norm to many of our customers that  “Implementing new systems will cost more than maintaining the existing one “. I was also under the same group of people to vouch for this. It was until SAP has come up with Rapid Deployment Solution, shortly RDS. Personally, I have implemented a project in less than a 3 month with RDS solution. With RDS the implementation cost has come down very drastically. The only dependency for time and efforts is the volume of data and number of data migration objects with SAP RDS Concepts.

I will explain why: The major time taken in any SAP Implementations is in designing phase (Blueprinting & Configurations). With RDS, SAP has eliminated the need for designing phase. RDS is an accelerator tool, takes inputs from the customer on organizational elements and makes the system ready immediately. Which means technically system ready from the Day 1 of the project for a customer to test it and understand the gap. Blueprinting and Testing phases are combined, the fit gap analysis is done at the testing phase from the day 1. Only delta configurations and developments are to be by the project team. Less time, Less cost and Immediately available.

How simple is  New Implementation?

1. Install SAP S4H Software if it’s an On-Premise with SAP Software Provisioning manager* ,if cloud even this is ruled out.
2. Migrate your existing data from the legacy system with SAP Data Services* if it’s on premise or SAP Landscape transformation tools* if it’s a cloud version.

* These are tools are part of SAP Active Methodology and implementation processes. Will explain Data Services and SAP LT in further blogs.

2. System Conversion:
This for our customers who wanted to convert their existing SAP Business suite to SAP S/4HANA. This choice is mostly for the customers who would like to rely strongly on their existing business processes and also consider benefits of technical advancements like Fiori, Data Analytics etc brought in by HANA DB. Comparing to implementation project, the turnaround time is very quick. It can be considered as in-place conversion.

The only two prerequisites for opting out this approach is the one should have an existing SAP business suite live and running and has to look for only on-premise deployment. Cloud conversion is not possible with this approach.

How simple is Implement?

1. Use SAP maintenance planner*  to check the availability of business functions. Here there is always a possibility to de-install the if there is any compatibility issue, also check the Industry solutions availability.

3. Once you are done with custom code checks and adjustments of custom code, the last step is to data migration using software update manager.

1. Consolidation is the process of migrating multiple ERP systems to S4H to simplify the landscape, this could typically happen when a newly acquired company is into different landscape and processes and the customer would like to bring it upon to uniformity into a single system.

2. Carve-out is the process in which customer decides to move certain business units and or certain modules to S4H to bring out quick ROI. a customer could carve-out Finance module from multiple ERP systems to Simple Finance in S4H, this will bring him the advantages of a universal journal and control of finance for all the business from a single system.

How simple is that?
1. Install a new S4H server by checking the product availability matrix provided by SAP.
2. Use SAP Landscape transformation tools to accelerate the conversion from source to destination.

Several tools available for Data Migration on 3 modes of deployment. 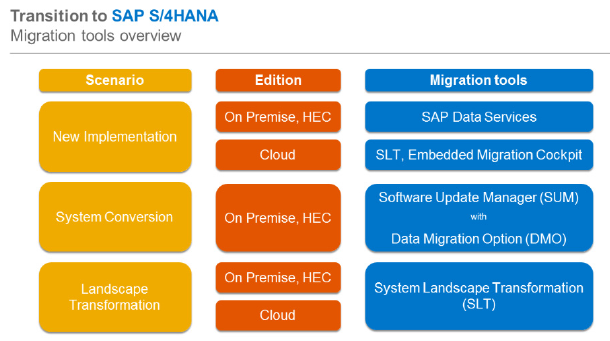 Thankyou so much for writing such informative blogs. I  have a couple of questions regarding Fiori Launchpas in S4Hana 1610. COuld you pls check the questions at this link and answer them .