Just what was the Track in Communications functionality and why is Mike constantly harping on it?

I get the impression that many folks discussing Activities and Notifications have blank looks when I mention the Communications folder and how valuable it was to many of us, particularly, but not limited to Moderators.    I had been assuming that almost everyone who was familiar with the Jive version of SCN was also familiar with Track in Communications.  Apparently I was mistaken.  So this is an attempt to describe in detail how it was used and why it was so tremendously useful. 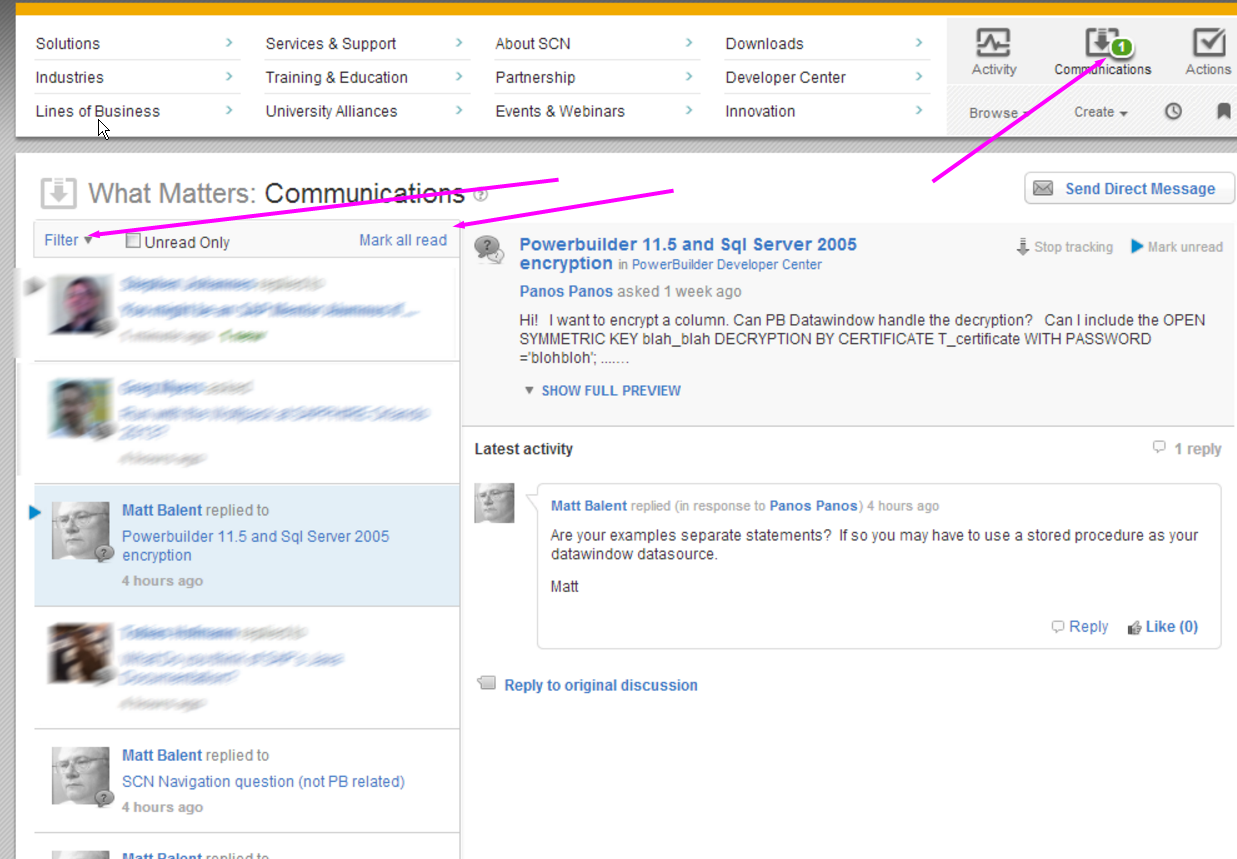 In this screenshot, there is a green number on the Communications icon in the upper RH.  The contents in the Communications [hereby referred to as a folder] would automatically display any items which had been marked Track in Communications.  One could mark a Discussion, Blog, Poll, Document, or an entire SCN Community with Track in Communications (link or button) and any updates to the specifically marked item or items in a marked community would show up in the Communications folder.  Any Direct Messages (the former equivalent of Chat) would also be logged there.  It would show all items or you could set a default to only display Unread Only.  Mine was checked most of the time as it is in the screenshot.  The green number on the icon indicated that there were 4 unread items.  It would max out at 50 (sort of like our current Notifications max out at 99)

There was also a Filter dropdown which I believe could show All, Direct Messages, Blogs or Discussions.  I used it primarily as All, but on occasion, I would select Direct Messages when I was a few days behind on clearing my Communications and wanted to see if there were any members I needed to respond to first.

As a moderator for more than one community (now primary tag), one could now see all new/updated items in a single location in chronological order.   Included were also global Announcements as well as Announcements created by Space Editors to display in an SCN Community.  This would allow one to scroll down to the bottom and process all unread items in the sequence in which they occurred.  The page would automatically expand to ~100 items without hitting a Show More Items button (equivalent to More button presently).  It could expand further, but one would have to hit the Show More Items button to do so in increments of ~20 items.  If I was behind in reviewing my Communications, whether due to press of my day job (yes, I do have one) or traveling or on vacation or for any other reason, it might hold several hundred items.  It would occasionally refresh according to no rhyme or reason that I could determine, but for the most part, it was static.  This was important so I could be reasonably assured that I could work from oldest to newest without having to repeatedly expand the page to get to the oldest items at the bottom.

As a Moderator, one of our duties is to review the content for which we are assigned (Communities in the old days, Primary Tags in the new).  Communications put all that content is one place, nice and neatly organized.  On rare occasions that I would be so far behind or when the count on the icon and the list displayed were out of whack (which is why I have this screenshot in the first place), I could hit the Mark All as Read.  I rarely used it except when the count still showed unread content, but the list was empty.

Wow, everything I needed to review (except Moderation, but I will get to that in a moment) including communities that I did not moderate was all there in one place, nicely organized.  I did not have to go to multiple Tag pages or Community Topic Pages, search through my Activities and Notifications, constantly hitting the More button and being swamped by Likes and Votes, Follows and Following, etc.

Moderation was different, but I will present that in the Moderator’s Jam Group.  Suffice it to say that Moderation Alerts (for Moderators) was included in Actions (equivalent to Activity Stream?) but separate from most Notifications (definitely not as it is now).  Unless you were a Moderator AND had one or more Moderator Alerts to process, one would not see the third tab below.

For me and many others, particularly Moderators, that Communications feature was tremendously useful. Anything so marked would display New content (now Questions, Blogs), updates to content including Answers, Comments, and Replies (and only the updated portions), Announcements for followed communities, global announcements, and so on.  Pretty much all the things I wanted to see and none of the stuff that I did not.  Wow again!

I really miss my Communications folder…