SAP HANA Vora 1.3 was made Generally Available on Dec16th 2016, With this release we extend the capabilities of Vora to deliver features beyond SQL modeling by proving three new engines to enable multi modal capabilities with Vora.

By continuing to leverage the Apache Hadoop and Apache Spark technologies, Vora1.3 natively delivers the following engines to extend data processing in the BigData landscape,

Document Store (JSON) – A distributed in-memory JSON document store that supports rich query processing over JSON data. The document store uses a special binary JSON format and supports schema-less tables. By combining JSON with most of the regular SQL features, it allows you to use SQL for JSON as well

Vora 1.3 also introduces the concept of memory-to-disk “spill over”by using a disk engine which enables storage and processing of petabytes of data

Apart from the above features Vora1.3 also enhanced the OLAP features by providing new functionality like Unit Of Measure (UoM) conversions. In this release we deliver the Currency Conversion feature which can be used from Vora modeler when building SQL models on top of HDFS/S3/Swift data stored on HDFS or on the cloud.

Vora1.3 also simplifies the install and configuration process by continuing to integrate the installer thru Hadoop Admin tools like Cloudera Manager, Ambari, MapR CS and in this version we deliver a new Vora Manager UI for easier administration and monitoring of the different Vora service

One of the key challenges and opportunities in the BigData landscape is on how to effectively secure the cluster and all communications around it. In this release SAP HANA Vora extends the Kerberos configuration to allow secure connections between the various Vora components and Hadoop/HDFS components

Learn more about these different features in additional blogs by Jason and Puntis on the new engine features and also listen to the recording of the 1.3 (beta) webinars. Stay tuned for more webinars in early 2017 on more Vora webinars.

Hi, nice blog! It contains a link to SAP JAM it seems, although it's published externally. Thanks & regards Antoine

that is correct Antoine, the webinars were hosted by HANA International Focus Group and they have an external JAM group where you can register and listen to live or recorded webinars

Thanks Balaji. Can I kindly suggest you to indicate to the readers how to register to this external JAM group? Currently if I click the link, this is what I get and I don't know what to do next.

it has probably nothing to do with Vora, but I had a very mixed luck with Jam. I once had access to certain content there, but it had been withdrawn and i never got it back, so not sure how it helps communicating with the external community.

Do we have any SAP documentation on Vora modeling and architecture. I have gone thought HA500, it covers basic aspects of Vora usage and capabilities  .

It will be great if we can have additional documentation around Vora modeling and integration with HANA and SAP PA 3.1.

Error occurred while starting all services: vora-dlog refused to start. Cannot continue Start All Jobs. Error: There are no health checks registered for service vora-dlog.

Check the nodes running DLog and your DLog configuration to make sure there is enough disk space to create the required log files.

You should post this as a question on https://answers.sap.com and be sure to tag it "SAP Vora" 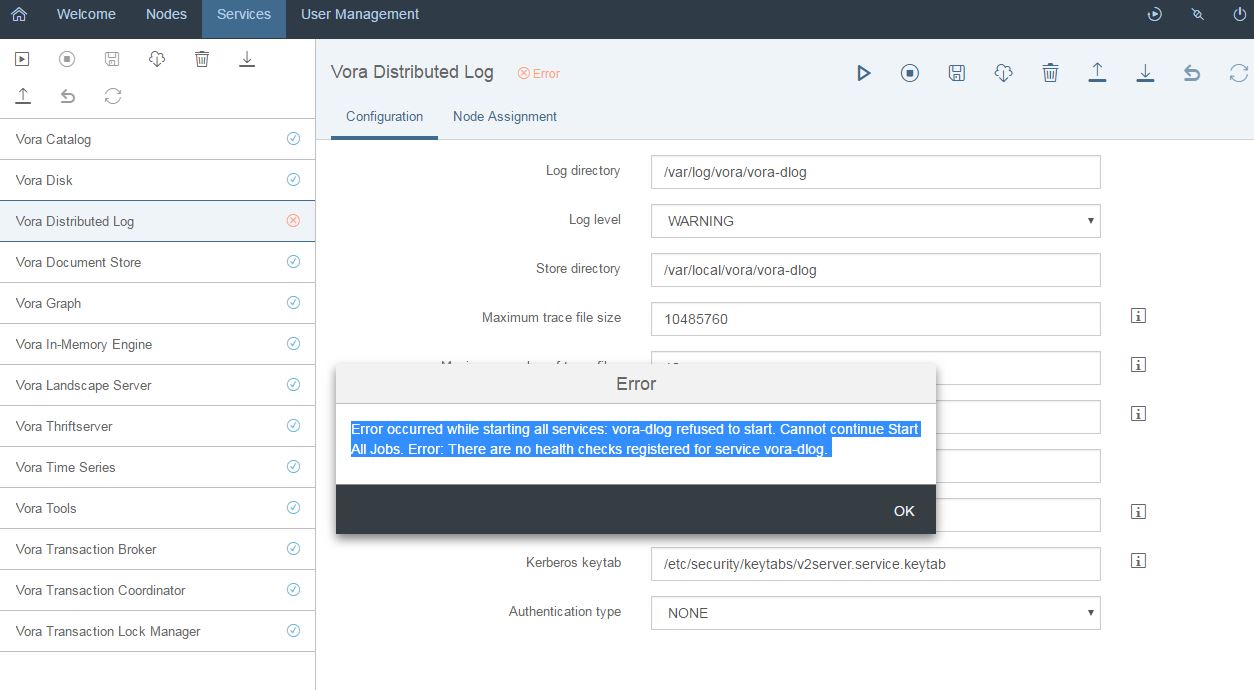 Thanks for your blog!

I tried to install Vora 1.3 with CDH 5.7 and CentOS 6.7, but many of the services just wouldnt start.

Then I installed Vora 1.4 with CDH 5.11 and CentOS 6.8. The installation completed smoothly without any warning or errors.

I don't know anymore what else I can do.
Thank in advance
Nazim