How to enable Custom screens in Responsive UI & Extended App

When switching from HTML5 (UX3) to Responsive UI (RUI), you might notice that some custom UI built using SAP Cloud application studio (also known as PDI/SDK) are not visible.

Create New screens: During creation of custom screens for custom business object, in the ‘Create New Screens’ pop up, under ‘Supported Devices’, select the appropriate option. The default option is ‘Desktop Only’.

For the screens to be displayed in Responsive UI, select the option as ‘Desktop and Tablet’ as shown below. This selection value can be changed later if required in the Property Explorer of the UI Designer. 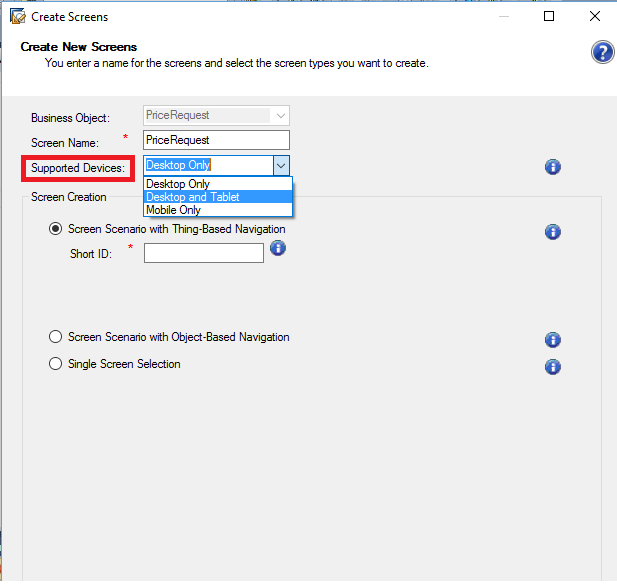 The entry Device = ‘Tablet’ will make sure that the workcenter, views are rendered in Responsive UI.

Limitation of Responsive UI (as of 1702)

While most of the Controls that you use in SAP Cloud application studio will work in Responsive UI across Smartphone, Tablet, Desktop. There are some Floorplans & Controls which will not. In case you are using them, the recommendation is to switch to a supported floorplan.

At later releases even when the QAF, OIF and FS floorplans are planned to be supported for Responsive UI, it shall be available/supported only for the Desktop/Laptop access and not for tablet and smartphone.

Panes & Controls:Following are the not so commonly used Panes & controls which are not supported currently for the Responsive UI.

Hence while designing your screens for the Responsive UI, make sure that you consider the limitations described here.

Many thanks for pointing out the "pain points" in SDK and solution proposal.

Is there any plan to introduce "S/4 HANA" like app to do modification, so that we can leverage of Transport Management Systems and ABAP layers, I have written a blog for same: https://blogs.sap.com/2016/12/15/please-bring-an-alternative-of-sdk-to-enhance-the-business-logic/

It would be nice if SAP can initiate some of the facilities of S/4 HANA world.

hello everyone nice explanation and thank you ver much

may i know how to send the data into standard Bo using EXteion BO,?

3) And  i was created extension Bo for that and it's very difficult to writing the code ..  IF any one Please help how should i send the data into Standard Bo?

it's my urgent Requirement?

We have tags set to Desktop and Tablet in all screens of a particular custom object and it still does not appear on the RUI.

To provide more details we have the following screens:

All except the wcf, have device = desktop and device = tablet in the tags.

For some reason though, the Workcenter does not appear on the RUI, only silverlight and the older html5. Any idea what could be causing this?

Hi Tiago, would like to check if you have managed to resolve this? Thanks in advance.

Also read how to primary navigation in Chunk View in Fiori Client:

I have followed all the steps to enable already existing screens to be visible in RUI using tags.

However it does not seem to work.

It seems to be a regular issue that people face, is there any known solution?