“Blockchain” is already widely regarded as next big disruptive technology with the potential to change how we pay, share information and interact with institutions.[1][2]

Blockchain technology, as stated in the UK Government Office of Science study “Distributed Ledger and beyond[3], provides the extraordinary promise by is pure technological nature to close current gaps in Public Sector, which are today still seen too expensive to close. Such as

Let’s explore that further by looking at a very costly challenge for relief organisations which currently is expensive and complex to overcome. How to realize a better interoperability in a disaster relief mission? 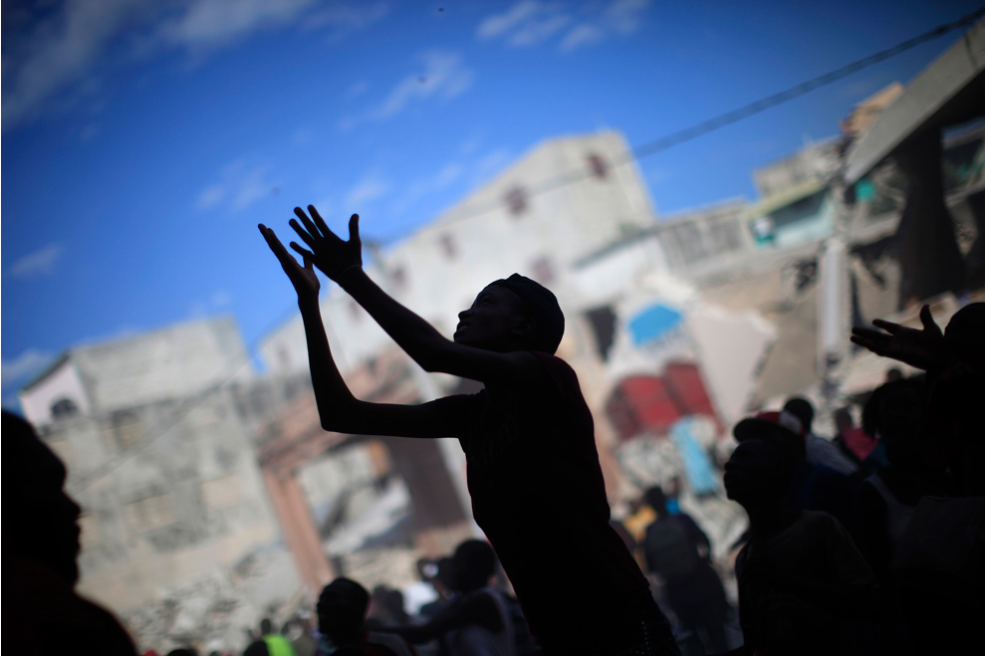 As you might know, Forces do one thing permanently – planning. But still there are activities, which can’t be pre-planned properly. For example disaster relief missions. In such a scenario nobody knows where, when and in which dimension a disaster happens and what the consequences are. What is known though is that help has to come in fast (the famous 24h rule). And you have a lot of “helping hands” coming from both Non- and Governmental Organizations all with their different capability to deliver help.

The United Nations Foundation Report Disaster Relief 2.0[4] describes the following gaps, which were not addressed in Haiti 2010:

To sum it up interoperability between the different relief parties and information exchange with the population was not given. Even today six years later security risks and technical complexity of setting up federated systems swiftly are blocking interoperability. Additionally there is an understandable need to keep data sovereignty for the Defense Forces.

Results are, that scarce resources in the disaster area (airfields, IT infrastructure, vehicles) are not properly shared and unnecessary tensions between all parties and beneficiaries are rising. This results in situations where goods are not optimally delivered to those which are in need the most.

Could this scenario look differently with Blockchain technology applied?

Can Blockchain help to close that expensive gap or better said can get helping parties better organized? Let’s map the described challenges above to the potential of the emerging technology.

In contrast to the traditional means of a federated system with a single clear owner, Blockchain technologies allows us to connect several “central systems” of Defense Forces, UN, NGOs, Governmental Agencies etc. via a so-called distributed network. In which each party would represent one or several Blockchain nodes. Becoming a node is fairly easy either in a permissioned or permissionless Blockchain world..

Additionally central systems of the involved parties are not exposed by being directly connected to each other but only via a joint Blockchain participation. And as such can keep up their internal data sovereignty.

Such a Blockchain system could be provided by any Defense or any other disaster relief organisation. The costs of sustaining such a capability would be comparably low as it would be simply scaled up only when needed. Infrastructure requirements of course are connectivity, which is usually not a problem with disaster relief missions, as network access is normally re-established as one of the first activities.

Growing number of volunteer and technical communities
There is a lot of goodwill to help also with technical tools. As the UN foundation’s report shows that leads to information overload, but also an unclear information situation due to too many sources.
Exactly that can be solved by Blockchain, as information assurance and provenance are one of the key promises of Blockchain. Source and modifications of data are visible to everyone and therefore provide proper information assurance. In a disaster relief scenario the current water supply situation or demand could be such an information, were source of it and later modifications have to be traceable.

Even during the Haiti earthquake tens of thousands were calling/SMS’ing their needs and situation within their communities. Social media was also used to publish and share knowledge and situational awareness.[5]
That “feeds” were handled indecently by relief organizations.

Re-imagine that situation using Blockchain, where the same information and its quality can be assessed and even individual relief activities are transparent to all other parties/nodes within the distributed network. That is the clear game changer for achieving better disaster relief coordination and interoperability.

The report Disaster Relief 2.0 adds further, that “They demanded a composite picture across all specialties and organizations involved in the response, but that was unrealistic given the humanitarian system’s paucity of technical resources and staff, and nor with its document-centric methods of information collection and data exchange.”

Again also here Blockchain technology has a lot to offer. Capabilities such as:

In the end the usage of Blockchain could look like the schematic below: 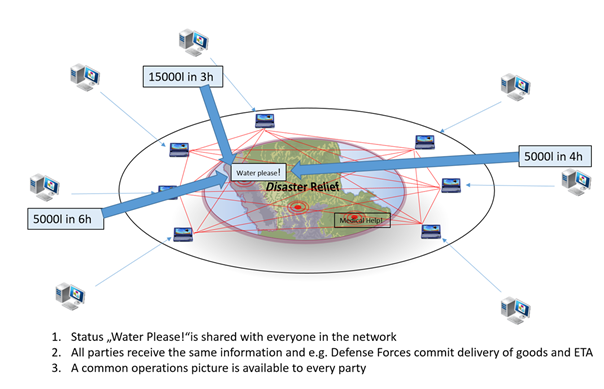 Comparing the current challenges in disaster relief missions with the promise of Blockchain technology shows its game-changing potential on achieving better interoperability. Of course technology is always only a part of fixing interoperability issues and political dimensions should not be neglected. But it is always worthwhile to explore new ways of solving problems, especially in areas, like disaster relief missions, where lives can be saved.

If you are interested in learning more about what Blockchain can do in the area of interoperability and our latest technical understanding based on prototypes, feel free to post a question in the forum or contact me[6] directly.