Why Artificial Intelligence is The Next Killer Feature in Enterprise Software

Artificial intelligence is gaining traction faster than anybody imagined — quickly knocking down the dominoes of complex tasks that computers have long struggled with.

For example, in April this year Wired Magazine ran an article explaining why AI still sucked at transcribing speech. But just six months later, AI is now as good as humans at listening! (and — scarily — using that audio, Adobe will soon allow you to type in any text and hear it in that person’s voice).

And there have been similarly dramatic advances in other areas. Adding machine learning to Google Translate has improved error rates by up to 85% since it was introduced a month and a half ago!

“It has improved more in one single leap than in 10 years combined” — Barak Turovsky, product lead for Google Translate

The list goes on: Google’s AI can already lip read better than people, and the company’s image service is now better than people at recognizing and tagging images. Not only can it tell you, say, that an image is of a building — it can even take a good guess at where it’s located and when it was built, based on the architectural style!

In the business world, AI is becoming the next “killer feature,” poised to do to middle-management what industrial robots did to car manufacturing. Any jobs that involve “repeatable complex decision-making” are at risk of being replaced. This includes a lot of the work of professionals such as doctors, lawyers, and accountants — for example, SAP’s next release will include automated invoice-matching, backed by machine learning.

Some experts such as Vinnie Mirchandani are optimistic that while these new technologies will disrupt existing jobs, they will — like all previous technologies since the dawn of time — ultimately create more than enough new jobs to replace those that are lost. Others, such as Martin Ford, are more pessimistic, arguing that it may even lead to the collapse of the consumer economy.

Either way, artificial intelligence and machine learning is quickly being embedded in software platforms and applications, and becoming an essential part of every organization’s future plans.

And at least one car manufacturer has decided that nobody will buy self-driving cars that don’t protect the driver, maybe even if it has to run over pedestrians to do so — if that’s not a “killer feature,” I don’t know what is! 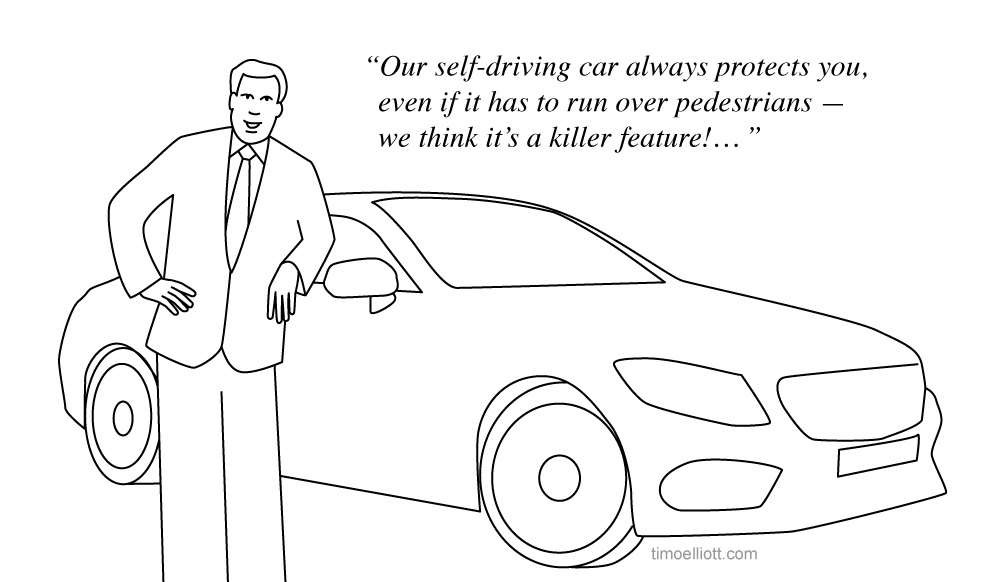 Are we really talking about artificial intelligence, or just machine learning? People seem to often use the terms interchangeably, but they're not really the same thing, are they?

I can see lots of opportunities for using machine learning in the Enterprise Software world, but I'm less clear about AI.

"The fact is, no existing AI technologies can master even the simplest challenges without human-provided context. As long as this is the case, today’s version of AI is not actually “intelligent” and won’t be the silver bullet for any of our business or societal problems. And claiming so as a business or reporting so as a journalist is counterproductive and misleading."

While this kind of Artificial Intelligence is accessible in 2017, profound learning requires complex frameworks that require some investment and skill to construct and run, so it might take an additional couple of years for the tech to end up plainly prevalent in the occasions business.