More than 125 years after the very first automobile, the ultimate vision might finally become reality: a self-driving car that doesn’t emit pollutants and doesn’t endanger anyone. No one knows when exactly we will get to that stage, but everyone in the industry is certain that such a vehicle will be 100% digitalized and connected to the internet.

“The electronic systems in a modern car or truck are based on up to 100 million lines of code, which is more than in some jet aircrafts,” states a recent article in the New York Times. One could easily say that the modern car is really a “computer on wheels”, as Bruce Emaus put it. He works for SAE International, a global association with more than 128,000 engineers and technical experts in the aerospace, automotive, and commercial-vehicle industries. Actually, “30 or more computers on four wheels” would be more correct, Emaus points out. The microprocessors implanted in cars nowadays control components such as the engine performance, advanced driver assistance system, parking sensor, and even the information and entertainment systems. And all of them need to flawlessly communicate with each other.

Back in 1977, things were a little different: An Oldsmobile Toronado had exactly one simple computer, which regulated the spark-plug timing. A year later, the Cadillac Seville introduced the trip computer. And now, in 2016, the parent company General Motors (GM) can already celebrate 20 years of its “OnStar” service. Today, the online telematics system continuously monitors the condition of the vehicle, diagnoses problems, and regularly sends e-mails to the the owner – for example, when the tire pressure is off or the oil needs to be changed. “But OnStar can do much more than that. It notifies you when the car is involved in an accident,” says Ronald Franz, Executive Director and CIO of Global SAP Architecture & Services at General Motors. “The sensors quickly evaluate how serious the accident was, and a control center immediately sets the necessary emergency assistance processes in motion.

About 12 million GM vehicles operate with “OnStar” today. The key for both driver and manufacturer is to always use the data from sensors, cameras, and sometimes even microphones in a meaningful way.

By now, the software does much more than warn the driver about dangerous situations over a display on the windshield or call the repair shop through voice control.

The connected car offers unprecedented opportunities for innovative digital business models and poses new challenges for the entire industry. Until now, car manufacturers could focus on their core business – everything from planning car models to marketing. Now, however, they also have to consider things like digital services and contents and deal with new competitors; start-up companies enter the market with new concepts for info and entertainment, safety services, or vehicle and mobility management. Even IT and internet industry giants are gearing up for pole position in the “connected car” market. 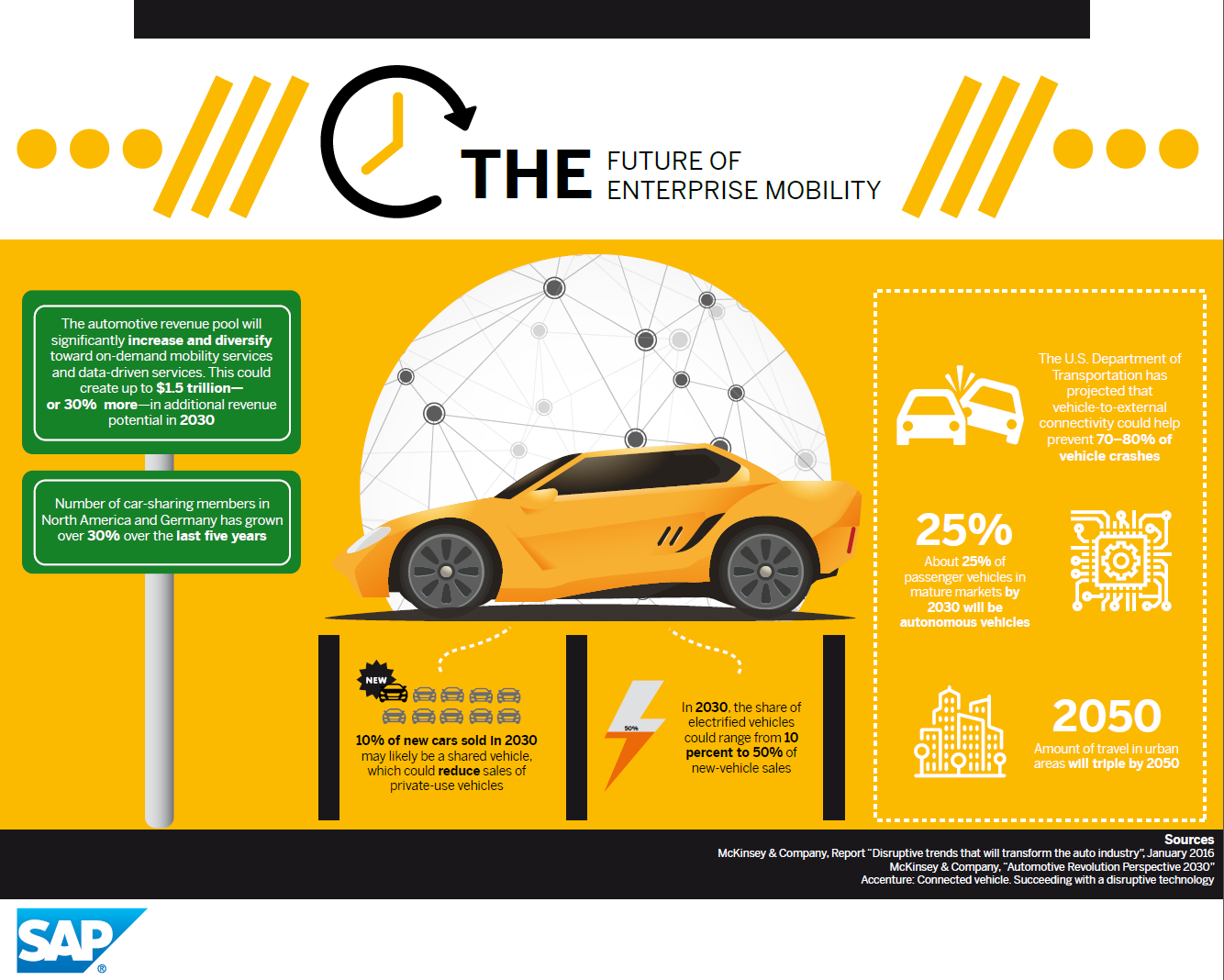 Accenture, for example, predicts a world-wide value increase potential of U.S.$100 billion for 2020, which will increase to U.S.$500 billion in 2025 – roughly one-fifth of the overall automobile market volume.

If they haven’t become one yet, automobile manufacturers, suppliers, and service providers will soon become software producers themselves or join forces with IT solution suppliers. ARI, for example, is one of the largest private car fleet management companies in the world and can offer its customers comprehensive data analyses thanks to SAP HANA. Among other things, the telematics data allows them to find correlations between driving habits and consumption data fuel and tires) and thus find out if a truck driver is consistently driving too fast and therefore consuming excessive fuel and causing increased tire wear. Or the data could show when drivers leave the car in the repair garage too long, indicating they might just prefer driving the expensive replacement car.

The insurance industry must also respond to these new social trends. “Pay-When-You-Drive”, a payment method based on the actual usage of the vehicle, is aimed at the growing car-sharing market. “Pay-How-You-Drive” is an insurance premium based on the risk calculated from your personal driving habits. The sensor data from accidents allow the insurance company to calculate the cost quickly and easily.

Platform for drivers and passengers

The new opportunities for the information and entertainment sectors are even greater. According to a McKinsey study from January 2016, “Interconnectivity and the technology behind autonomous driving are increasingly turning the car into a platform for drivers and passengers.” The former focus on driving the car is being replaced by new media, content, and service usage opportunities while driving. “Vehicles that bring drivers to their destination faster and offer communcation, entertainment, and shopping opportunities will soon become the prime products,” says Dr. Christian Malorny from McKinsey. This trend has already raised interest in competitors outside the automobile manufacturing companies.

To say that the automobile industry is changing would be an understatement. Many experts believe that digitalization is bringing the greatest transformation to the industry since the invention of automobiles themselves. It is reinventing the driving experience, opening the automobile ecosystem to new competitors, and forcing well-established manufacturers to redefine their role in the connected automobile world to mobility service providers.

The dream of accident and pollution-free, self-driving cars is no longer just a distant illusion – the question is no longer whether it will happen, but who will be in the fast lane and who will end up in the roadside ditch when it does.