RECAP: Turning Over 1600 – Leadership Perspectives on the Peaceful Transfer of Power 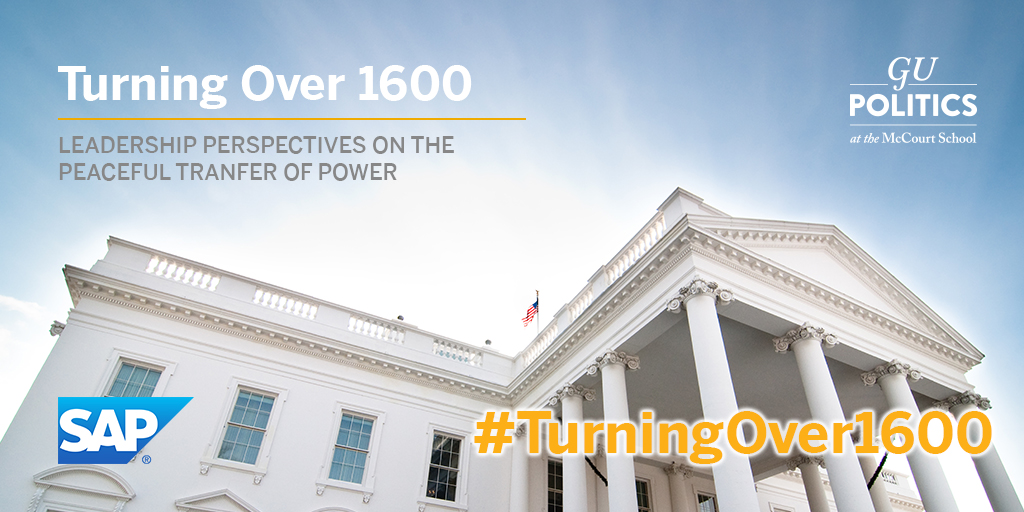 Turning Over 1600, an event hosted by SAP Institute of Politics and Public Service at Georgetown University’s (GU) McCourt School of Public Policy, attracted an audience of hundreds to hear an impressive roster of speakers discuss two essential elements of any peaceful transition of governmental power: Technology and people.

The event emphasized that any administration can positively impact issues citizens encounter every day through technology. This can be done though solutions that allow more efficiency and transparency, or using the government’s awareness of the digital economy to support training and education opportunities for roles that roles needed in the workforuce of the future.

Mo Elleithee, founding executive director for GU Politics, and SAP’s head of Regulated Industries, Brian Roach, opened the event with keynotes addressing the next generation of political leaders in the audience, and how technology must play a role in bringing government closer to its citizens. Public service by way of political engagement, both said, is the roadmap to create change. The clear message here was: Be the change you wish to see in the world through political leadership.

Two panels of speakers would continue to unpack the role of technology and people in the upcoming 115th Congress in affecting change for citizens.

Veteran reporter Nina Easton moderated a discussion between Congressman Will Hurd (R-TX) and Ted Lieu (D-CA), who offered the critical insight that government needs to resume the role of technology leader. Consider the provenance of the Internet: a Government project. Over the last few decades, the private sector has taken the lead position as an innovator. Both congressmen emphasized that government must change if they are to serve citizens and be an effective change-maker for the future. (View this discussion at 49:30 in the video below.)

THE ESSENTIAL ROLE IN THE TRANSITION

Renowned Presidential Historian Douglas Brinkley led a conversation with Andrew H. Card, and Denis McDonough, former and current presidential chiefs of staff, respectively. From their vantage point in the modern presidency, they offer people – along with technology – will play an essential role in this period of transition. They cite how the role of the chief of staff is to ensure a clean transfer of knowledge to keep the government running and running well. (View this panel at 01:30:0
0.)

Remarking on the power of these events to reach SAP’s customers, Mark Scallion, SAP’s Public Service’s vice president Federal Civilian Agencies, who attended the event said, “Aside from it being informative and thought provoking for the attendees, we benefitted from relationship building traction with key attendee stakeholders that we otherwise would not have had.”