Transport of Copies and Version Management with ChaRM

The use of transport of copies has a number of benefits to the overall change management process. An overall reduction in the number of transports that move to production is realized.  Workbench locks are continuous for the entire development cycle until testing is complete and the change document set to the status of “Successfully Tested”.  This eliminates the scenario where multiple developers can change the same object without collaborating.  Continuous workbench locks will require the second developer that wants to change an object to consult with the owner of the workbench lock.

These benefits are very valuable. Reducing the number of transports in the go-live buffer at release time can bring about significant reductions in the time the import takes during go-live.  This can free up time for other activities during the release, and reduce the overall down time of the cutover.  Extending the workbench lock on an object results in better control of the object during development and a more stable go-live.

This process is different from the scenario that plays out when a customer is not using ChaRM and not using transport of copies. Without ChaRM and transport of copies, only the changed object is added to a transport and released when ready for testing in the QA system.  New transports and versions are not created for the objects that are not changed.  As a result, there may be some confusion if there is a need to revert to a previous version of an object.  While it is possible to use the transport of copies description to distinguish between original transports and transport of copies, there is no easy way to determine which versions contain changes and which versions are duplicates because the change document was sent back to “In Development” and back to “To Be Tested” for a testing cycle.

The screen shot below is the version management listing for an object Z_PROG1. 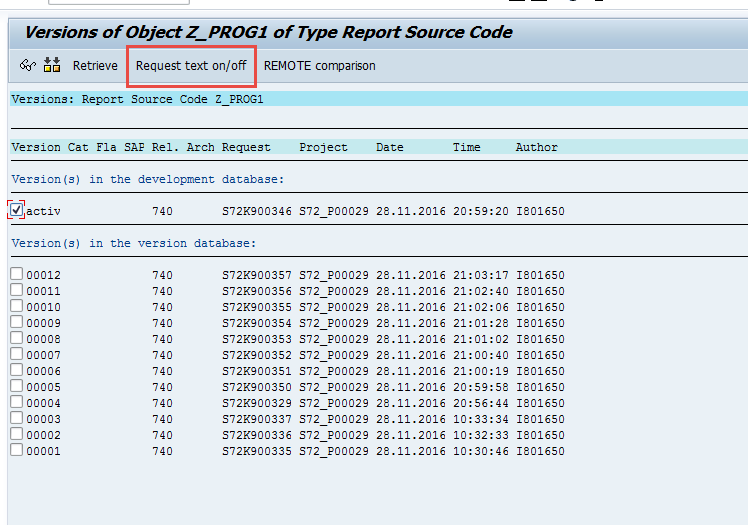 The list of versions contains a dozen entries. Using the Request Text On/Off button will help indicate which versions are due to transport of copies. 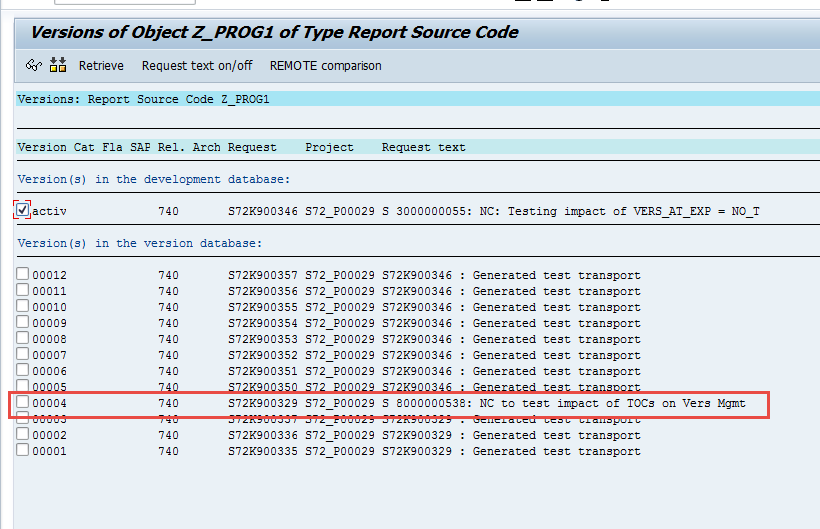 Because ChaRM automatically creates the descriptions for the transport of copies with the string “Generated test transport” at the end, the TOCs can be quickly identified. What isn’t easy to identify are the transports that contain changes to the program.  In the non-ChaRM, non-TOC scenario, every version contains a change.  In the ChaRM scenario, many of the versions may actually be the same if the change document was moved to “To Be Tested” multiple times to test another object on the change document.

The example shown here is a contrived example where I have simply created a program and passed the change document back and forth between “In Development” and “To Be Tested” multiple times to show the versions that are generated. In a real example, the program may be active for years and may be many times due to many change requests.  In this case there could be dozens of versions that accumulate over time.  With the introduction of ChaRM and TOCs, the number of versions that can accumulate over time could be 5 or 10 times as many.  The volume of change requests and the efficiency of the developers and configuration users will interact to determine how many versions are ultimately created.

For those customers where the volume of versions due to the use of ChaRM and TOCs is a source of concern, there is a CTS parameter that can be set to eliminate the versions generated by the TOCs. The parameter VERS_AT_EXP can be set to the value NO_T.  This option dictates that a new version will only be generated when the original transports are released.  The NO_T value has been recently added to the CTS configuration.  Check SAP Note 2296271 to see if your system will support the new parameter. 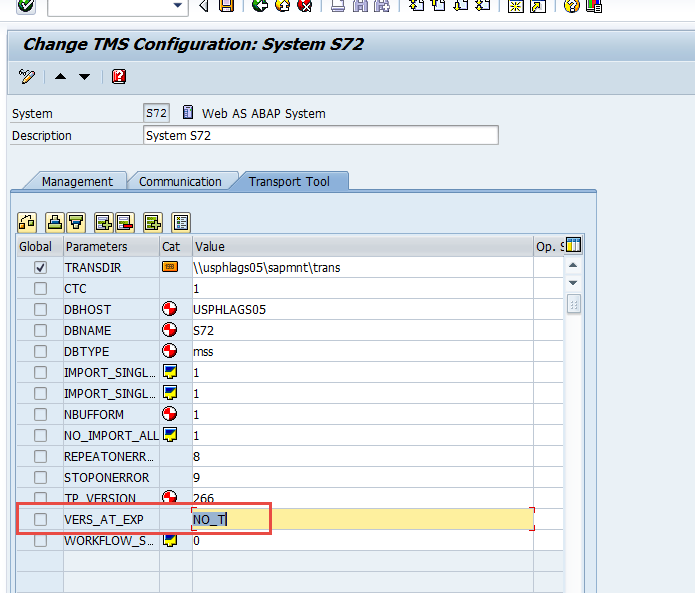 To demonstrate this parameter a new program is created and saved to a transport on a ChaRM normal change document. When created, there is only the active version with no version history to confuse the issue.

The program is then cycled between “In Development” and “To Be Tested” several times.

The version management history shows that no additional versions have been created.

Only when the document is set to the status of “Successfully Tested” is the original transport released.

Thank you for such detailed information. I am working for a customer where we have dual track scenario. we are using ToC only in Project track. version management can be handled using ToC efficiently. If two developer are editing same object , they can use ToC and Version Management. Multiple Developer can not modify the same object at same version because of object locking.

But in support track , we do not have ToC concept and CSOL is configured as warning only.

Now if two developer want to edit the same object in support development system, how they will proceed. how they will use the version management.