This week SAP has begun to ship SAP HANA 2.0 SPS 0.  If you would like to learn more about all the new features in SAP HANA 2.0 broadly, you can refer to the following blog post:

In this blog, I would like to point out some of the highlights of the new features for developers who use the SAP HANA native application development capabilities. It should be noted that most of the major architectural changes in the development topic area were recently introduced in SAP HANA 1.0 SPS 11.  This is when we first shipped the SAP HANA extended application services, advanced model (XSA), SAP HANA deployment infrastructure (HDI), and the SAP Web IDE for SAP HANA.  If you are new to these topics in general, you might first want to review the what’s new details from SPS 11, SPS 12 and the recent openSAP course on this topic.

We will also be hosting a webinar for the What’s New Developer topic:

We have also updated the exercises from the latest openSAP course to include a version that showcases how to build the same using HANA 2.0 SPS 0:

Database Development
In order to keep this blog from being too large, Rich Heilman posted about the database development features in a separate blog here: https://blogs.sap.com/2016/12/01/sap-hana-2.0-sps-0-new-developer-features-database-development

SAP HANA Extended Application Services, Advanced Model
One of the biggest changes to the SAP HANA architecture was the introduction of XS advanced in SPS 11. SAP HANA extended application services in SPS 11 represents an evolution of the application server architecture building upon the previous strengths while expanding the technical scope. While I don’t want to repeat all the architectural features which came with XS advanced in SPS 11, you can review them in this blog: SAP HANA SPS 11: New Developer Features; XS Advanced

With HANA 2.0 SPS 0, we have a few general improvements to the XSA core.  For instance we introduce Node.js 6.x runtime. We have also done much behind the scenes changes for footprint reduction and protocol optimizations.

With HANA 2.0 SPS 0, XSA introduces the option of context path based routing.  This allows the developer or admin to assign nice URLs with recognizable path names.  It also avoids the same origin policy issue (CORS/Cross-Site-Scripting). Instead of the port access you can assign a path that will route to your application.  This can be assigned during push or more likely direct assigned to a running application via the new create-route command.

Another nice enhancement is tot he xs logs command.  In the past you could receive all the log, the last x lines, or the recent entries.  With HANA 2.0 SPS 0, we add the option to specific a specific time span with the –since and –till options.

XSA Admin Tool
The XS Advanced Administration Application Monitor also received several new features.  It is our goal to bring as much as possible of the command line features to the web interface as well. With HANA 2.0 SPS 0 we see the added ability of the web tooling to stop, start, restart, restage, scale, rename and delete XSA applications.  We’ve also added a graphical display of the memory consumption of each XSA application.

ODATA
With HANA 1.0 SPS 11, we first introduced a new Node.js based implementation of the XSODATA service document approach to creating OData services.  This was a nearly feature complete version of OData V2 but did lack a few features which we had in XSODATA in XS Classic.  With HANA 2.0 SPS 0, we finish off the feature compatibility to XSODATA in XS Classic by adding support for the OData4SAP annotations.  We also introduce a new feature in the form of additional authorization checks via XSA scopes on the service entitySet level in XSODATA.

However to that end we feel that XSODATA and its OData V2 implementation is feature complete. Beyond HANA 2.0 SPS 0 we don’t plan to make any further enhancements to it.  Instead we will shift all of our focus in this area to new OData V4 implementation.

This new OData V4 implementation will be architecturally different from XSODATA. Therefore won’t be a service document as there is today. Instead there will be a library approach with one or more EDM providers.  For instance we will have a generic CDS provider as one implementation of this library.  This approach is very similar to how ABAP is able to create OData services from CDS.

In fact with HANA 2.0 SPS 0, we ship the first version of this new OData V4 library.  This first implementation is not feature complete.  It primarily provides read-only access. It is also only implemented in the Java runtime.  In 2017 we plan to further build out this runtime with update/delete/create as well as analytic operations. We will also provide a similar V4 library runtime in Node.js.

The usage of this new library is quite simple.  From your HDBCDS artifact you add the @OData.publish: true annotation before your context: 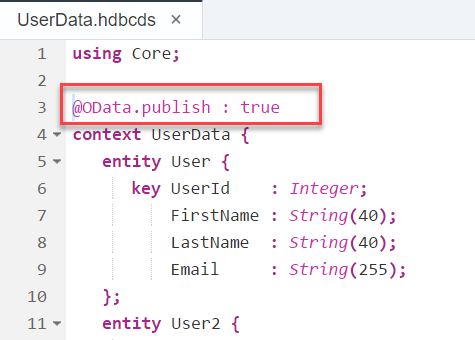 We have examples of this here: https://github.com/SAP/com.sap.openSAP.hana5.example/blob/hana2_sps0/user_db/src/data/UserData.hdbcds

And examples of such a Java module here: https://github.com/SAP/com.sap.openSAP.hana5.example/tree/hana2_sps0/user_java

The SAPUI5 MTA has to be declared as a resource in your mta.yaml file.
https://github.com/SAP/com.sap.openSAP.hana5.example/blob/master/mta.yaml

You then list that resource as a requirement of your html5 modules.

In the xs-app.json of your HTML5 module(s) you can configure a dynamic replacement. This avoids having to code the actual URL or port of the SAPUI5 runtime into your application. https://github.com/SAP/com.sap.openSAP.hana5.example/blob/master/web/xs-app.json

Finally in your html page where you specify the SAPUI5 bootstrap, you can use this replacement variable you defined in the xs-app.json. https://github.com/SAP/com.sap.openSAP.hana5.example/blob/master/web/resources/index.html

Therefore it provides a complete workflow for all of your new HANA Deployment Infrastructure (HDI) and XS advanced model (XSA) based development.

With SAP HANA 2.0 SPS 0, we continue to enhance and expand the capabilities of the SAP Web IDE for SAP HANA.

Git Integration
Git is the new source code and design time object repository in the new world of HDI and XSA based development.  Therefore its critical that the SAP Web IDE for SAP HANA has capabilities to allow the developer to directly interact with Git. In HANA 2.0 SPS 0, we add new Git features such as ability to interact with multiple Git branches: 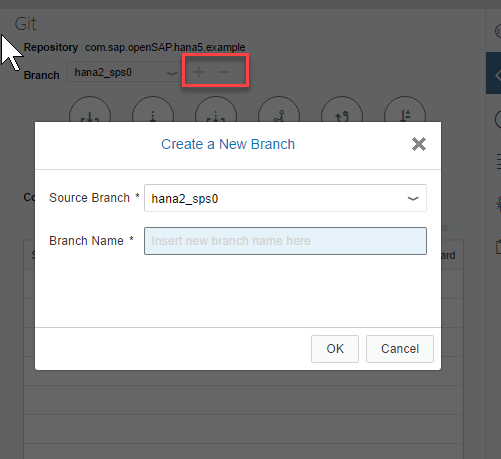 We have also added a Git History viewer to the SAP Web IDE for SAP HANA: 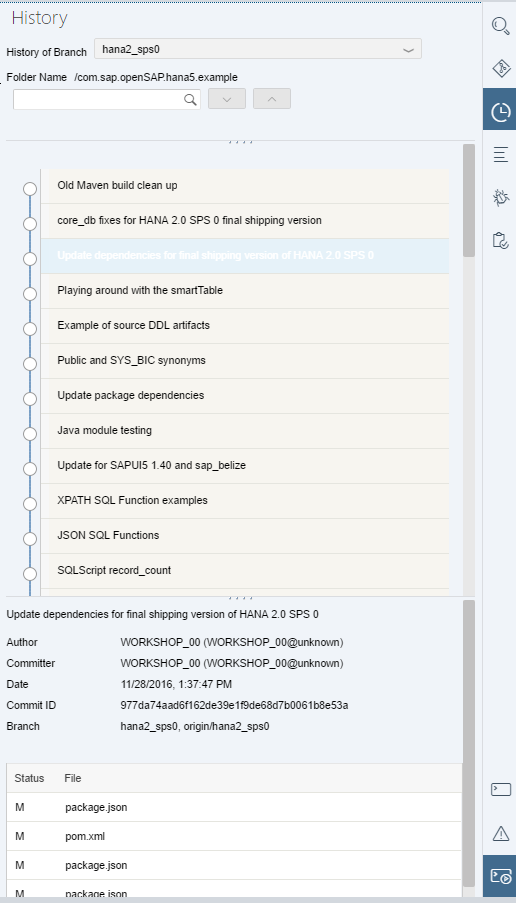 Problems View
One of the items of feedback from customers was that build and syntax errors were difficult to find and read in the SAP Web IDE for SAP HANA. Often they were burred deeply in a larger log.  Also there was little to no connection back to the source object which produced the error.

With SAP HANA 2.0 SPS 0, we are happy to introduce the new Problems View. This tool parses the large and complicated build logs to only display the important problem messages.  It presents them in a much more structured way. It also connects them back to their source location. 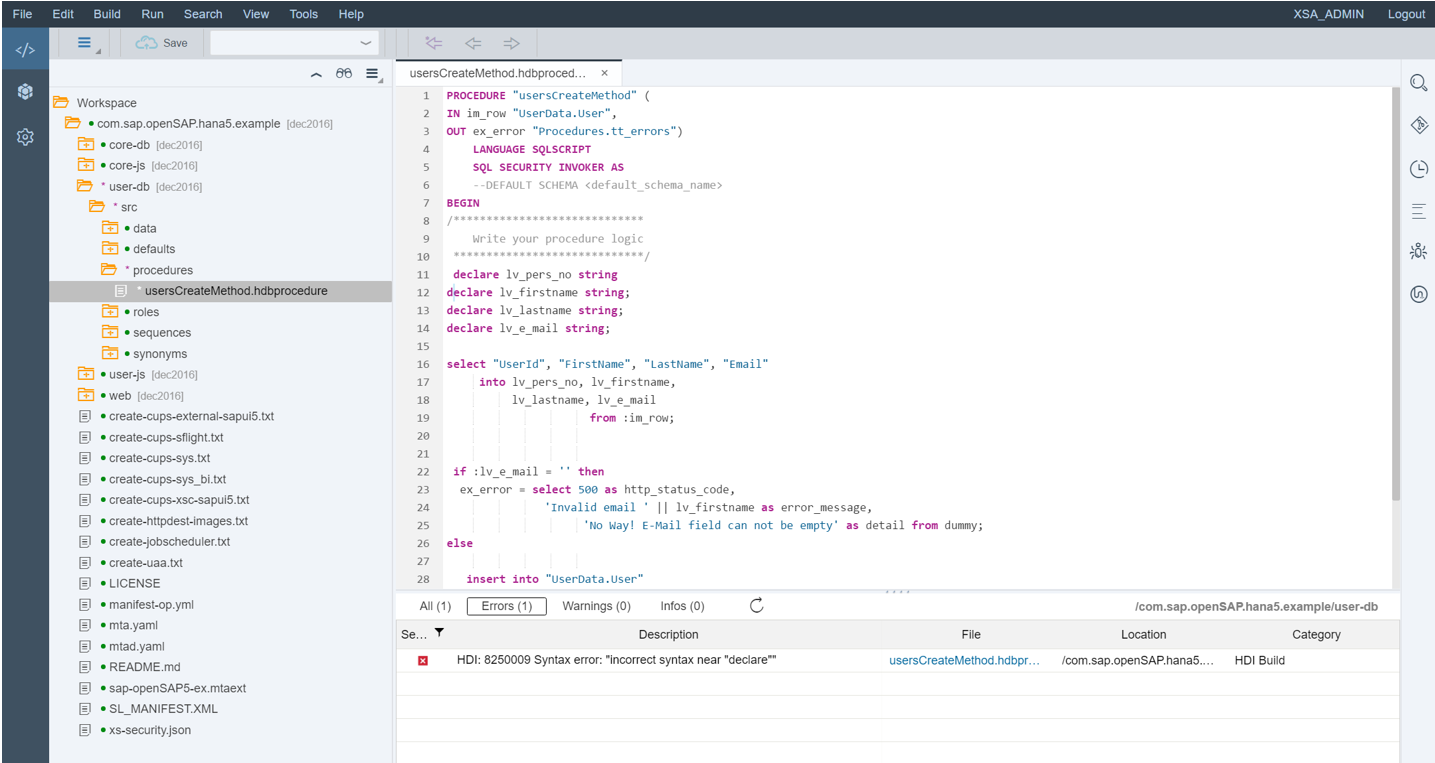 CDS Editor
The CDS Editor also has been enhanced in SAP HANA 2.0 SPS 0.  First was the added feature of Beautify.  This reformats the code or as many ABAP developers know it – Pretty Prints it. 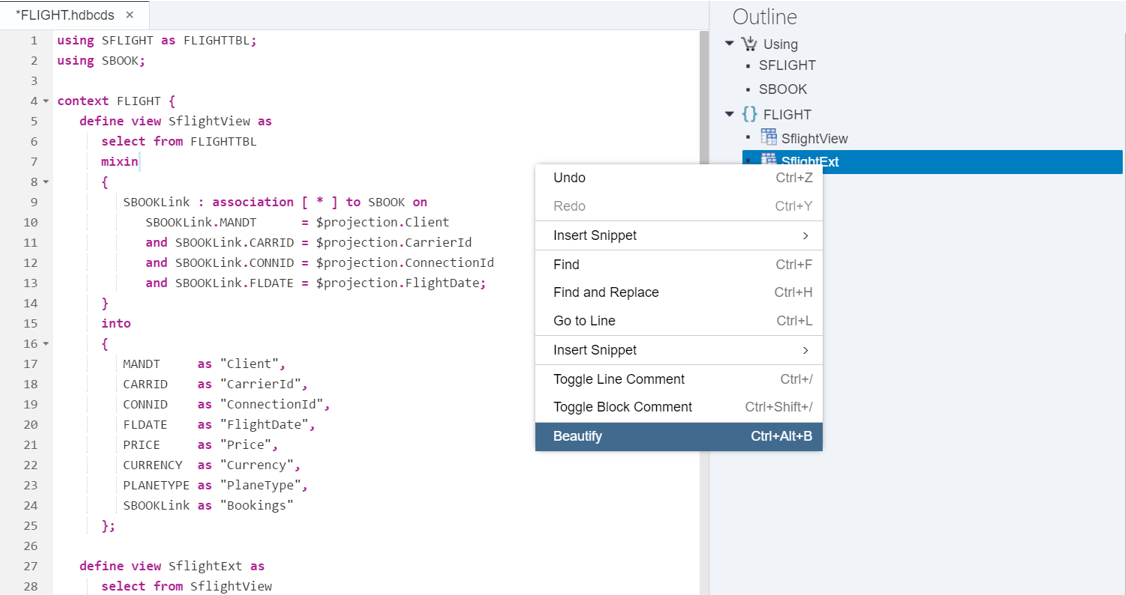 Selective Build
One of the major new features of HDB module building is the ability to perform a selective build on one or more files in your module. This is great for iterative development.  For instance maybe you have just designed some new tables, but haven’t built your HDB module yet.  When you go to create a Calculation View, the new tables won’t show up as possible data sources yet.  Now you can selectively build just the new tables so you can easily continue with your View development. 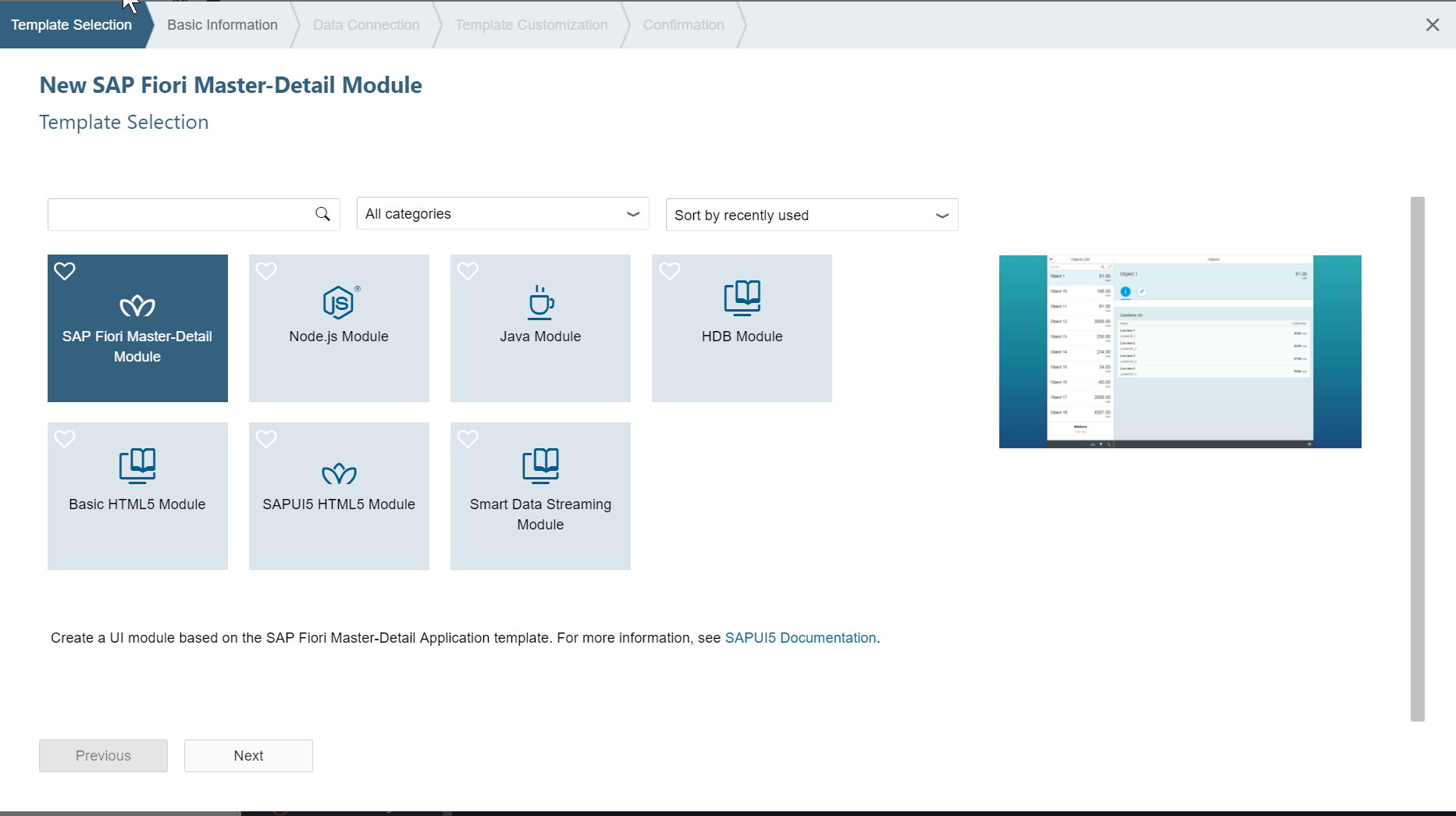 This new Fiori Master-Detail wizard not just generates the UI shell, but also allows you to specify the metadata for your target OData service and configure a lot of the UI based upon this service.

For applications generated by this Fiori Master-Detail wizard, the SAP Web IDE for SAP HANA also support the editing or generation of Mock Data for the services as well.

Java Module
Also new is support for Java Modules.  Java development/runtimes have been supported by XSA since its introduction in SAP HANA 1.0 SPS 11. However there was no development tools or build/deployment support for Java modules from the SAP Web IDE for SAP HANA.  This meant that if you had a single application that included Node.js and Java modules you couldn’t do the entire development and building in one place.  You could build and run your Node.js based modules from the SAP Web IDE for SAP HANA, but then had to use Maven and the XS command line to build or run your Java Modules.

We also introduce wizard and code generation support that will link your Java module to an HDI container and support the new OData V4 service generation from CDS entities. 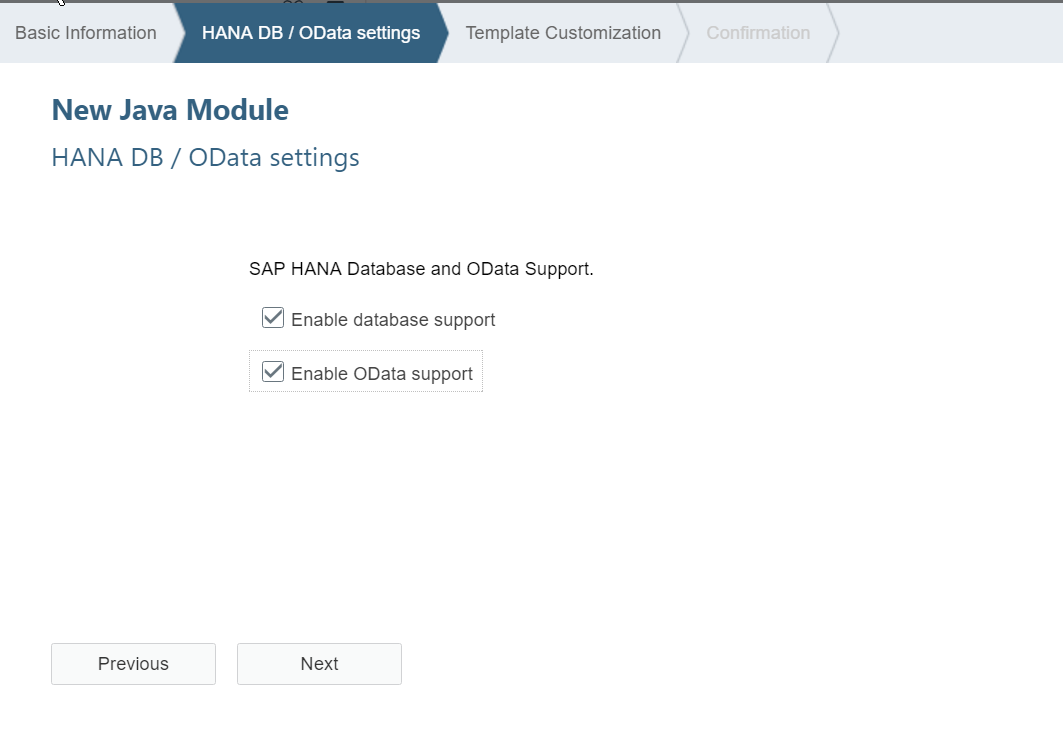 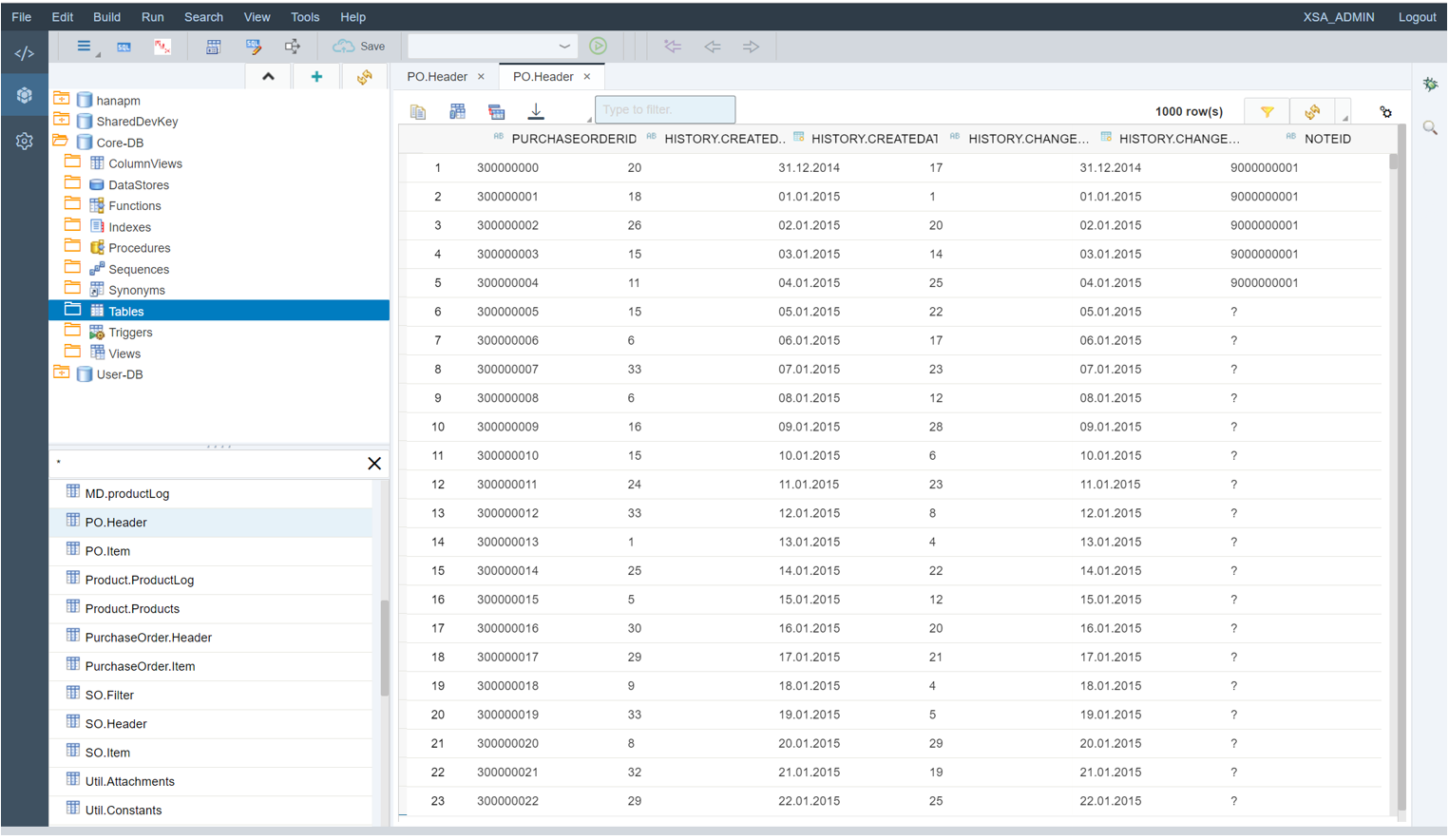 This integration comes with a pretty big visual and interaction redesign to help streamline all the processes that interact with both HDI containers.  We also add the ability to interact with traditional database schema from this tool as well. 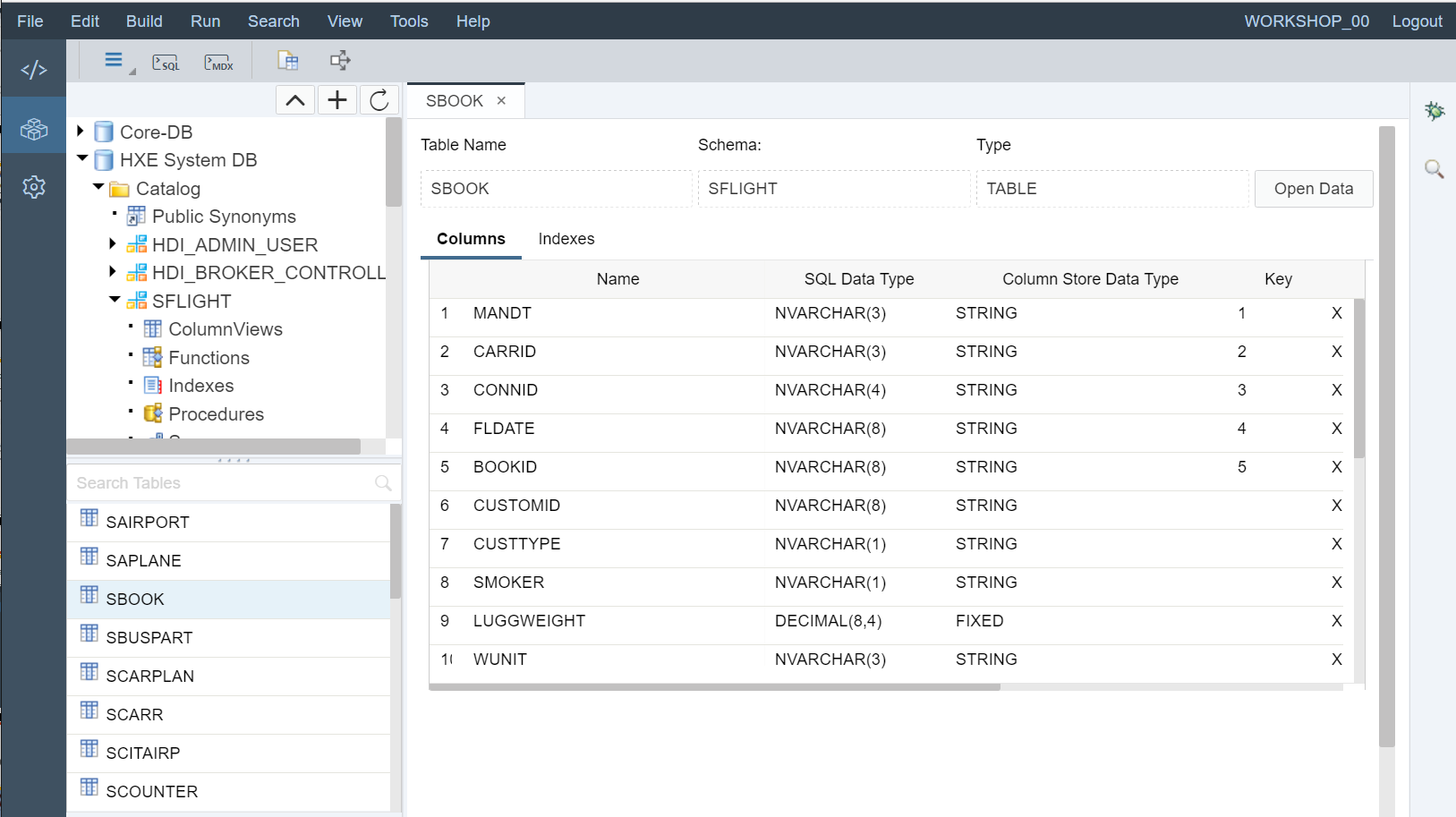 Closing
With SAP HANA 1.0 SPS 11, SAP introduced a considerable change in the architecture of application development. Much of the development for the past few years has been focused on just delivering the first version of that new architecture and then only closing gaps between the old and new architecture.  With SAP HANA 2.0 SPS 0, you are beginning to see that we can finally innovate based upon this new architecture.  The general improvements combined with tools and programming model changes you see here are laying the foundation to allow you to build new kinds of applications easier and faster than you ever have before.