3D Printers Could Give Miners a New Dimension

As Mining companies continue to slog through this period of fluctuating commodity prices and demand….  we continue to hear stories about companies trying out new business models by expanding beyond traditional industry boundaries.  3D printing is one such area that can not only impact how a mine works – but also give new business opportunities to mining companies.

50% of mining executives surveyed say they will invest in 3D visual display within the next five years.  (Source:  The New Canary in the the Mine, The Economist Intelligence Business Unit)

People remain a crucial aspect of a successful mine, with recruitment, retention, and productivity key focus areas. Many tasks will become automated, but people will be an even greater asset in ensuring the success of the mine as their roles change. Geo-sensing, automation, wearable technology, user interfaces, virtual reality, and 3D simulations are new technologies that will impact mining employees in the future, so they can focus on their work rather than on bridging process inefficiencies.

Employees don’t want to read manuals or attend lengthy training session to learn how to use new systems. Instead, they want a solution that is intuitive, simple, and visual, similar to the consumer applications used in their personal lives. Implemented technology must included 3D graphics and be visually captivating in order for it to thoroughly be adopted.

New user interfaces will make much more use of images and pictures in place of words. Voice and gesture recognition will make using software easier and safer on mobile devices. Virtual reality and 3D imaging and modelling will be common and reflect the transition of people’s roles from transaction workers to exception workers, who engage when the digital rulebook needs human creativity. 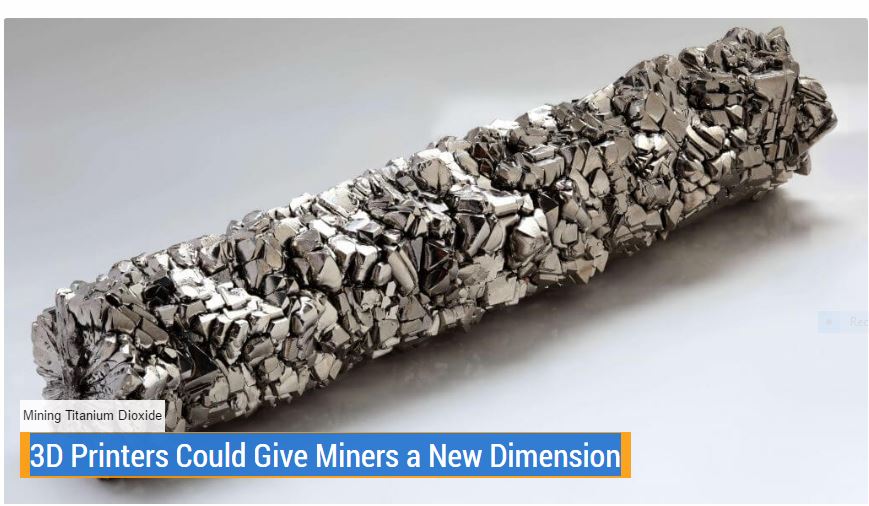 3D Printing as a new business opportunity for mining companies

This recent article in All3DP gives an interesting perspective on how mining companies can benefit:

Over the years, miners have profited from digging up these mineral sands and then shipping them to countries, such as China, to be used for whitening tiles or in paints.

Now though, miners from companies including Rio Tinto PLC and Iluka Resources Ltd. are hoping to be at the forefront of change by supplying the same materials for use in 3D printing.

Their plan is to work on ways to cut the cost of producing titanium dioxide, the compound commonly produced from mineral sands, and investing in technologies that will make it more attractive for the 3D printing industry.

“It is potentially a turbocharger over time on demand for titanium dioxide,” said David Robb, Iluka Resources’s managing director to The Wall Street Journal.

Industrial 3D printing offers great potential to diversify the market for mineral sands as manufacturers are looking for stronger, more lightweight materials that don’t cost more than the ones that they currently use.

To 3D print designs with titanium, the powder is melted layer by layer with a laser to create the item after slicing a digital image of an object.

However, they say that titanium powder is currently much more expensive than aluminum and steel, so there needs to be a strong business case for it to replace those materials.

The size of the market for 3D printing powder is set to increase at a compound rate of 24% each year through 2020 to be worth US$500 million, according to MicroMarket Monitor, an India-based research company.

It foresees 3D printing being increasingly adopted in the manufacturing of some components used in the automobile and aerospace industries.

However, although this sounds promising 3D printing does not account for much of the titanium-dioxide market and miners say it may be years before it contributes to their profits in a big way!

but they have to start somewhere!

or going to SAP.com/mining for more customer stories

Nice blog. I found this blog very useful. Your blog will be very beneficial for everyone. I have bookmarked your website. Please keep your effort continuous and keep providing us your valuable information and suggestions.