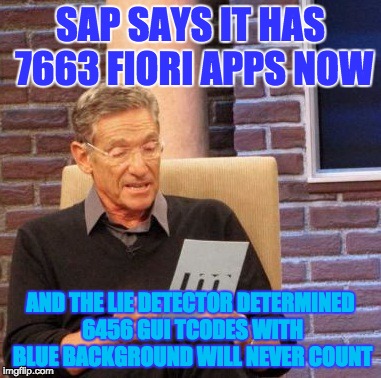 Maury tell us why.

The design philosophy of SAP Fiori is based on five core principles. SAP Fiori user experience is role-based, adaptive, simple, coherent, and delightful.

SAP Fiori is designed for your business, your needs, and how you work. It draws from our broad insights on the multifaceted roles of today’s workforce. SAP Fiori provides the right information at the right time and reflects the way you actually work.

Apart from making you work smarter, SAP Fiori also enriches your work experience by allowing you to simply do your job.

Whether you fulfill a sales order, review your latest KPIs, or manage leave requests – SAP Fiori adheres to a consistent interaction and visual design language. Across the enterprise, you enjoy the same intuitive and consistent experience.

With SAP Fiori, you can complete your job intuitively and quickly. SAP Fiori helps you focus on what is important – essential functions are easy to use and you can personalize the experience to focus on your relevant tasks and activities.

SAP Fiori enables you to work how and where you want, regardless of the device you use. And, it provides relevant information that allows for instant insight.

Is FB01 Role based?
https://fioriappslibrary.hana.ondemand.com/sap/fix/externalViewer/#/detail/Apps(‘FB01’)/S6OP

Please SAP, call GUI transactions with a blue background which are opened inside a new browser tab within an iFrame anyhow you want … but not Fiori.

Fiori principles were totally forgotten on such move and even if someone might like the result and want it, you are denying yourself.